I thought everyone might like a little update about Shinji, my 16 year old lynx point Siamese mix.  See how much more alert and happy he looks than before?

You met him first in this article:

Which told the story of how dear Shinji had started out as a grieving fifteen year old boy who had lost his human Mom to old age and was currently trying to share a home with ten dogs and two other cats.  He spent a lot of time in the back yard, didn’t play, didn’t like to eat, but hadn’t run away either.  He was just waiting for a forever home.

I won’t lie, it’s been a long road.  When Shinji came to us he was extremely timid and he had this issue where he’d gorge himself on any wet food he would find.  He did that because the other cats used to always steal his food, and so he never knew where his next meal came from.

Since his first days were chronicled in the last post, I won’t repeat them except to say that Shinji took a lot of patience to win over.  Patience, understanding, lots of talking to, and even more consistency.  Telling him verbally that his food was for him, giving him a place that was his, and his alone, to eat in peace, physical separation from my other cat at mealtime, and giving him lots of love were all critical.  Even things as simple as telling him he was a good boy really helped. 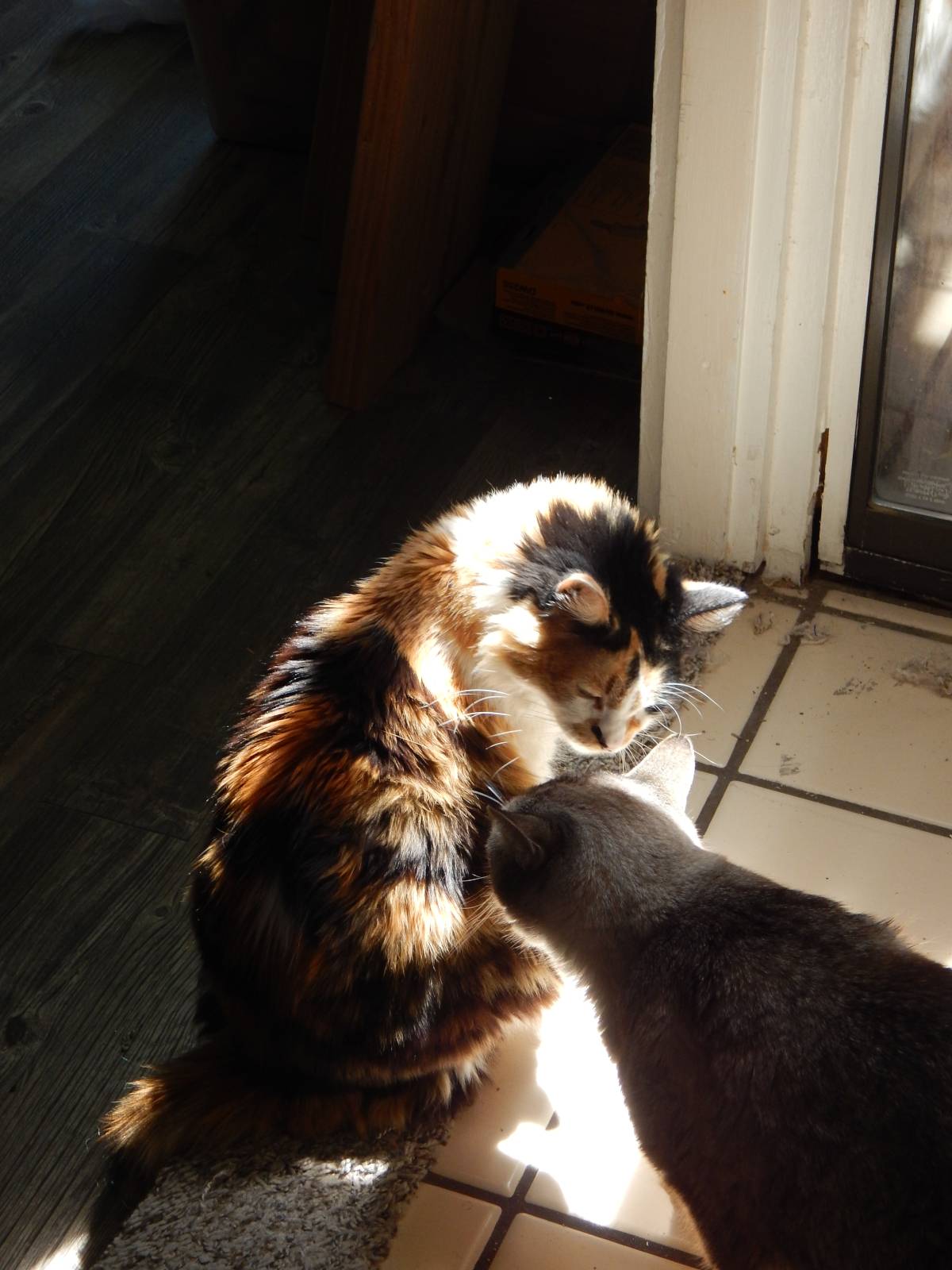 Careful observation was also important.  By watching him, we found out what kind of petting he enjoyed most, that he liked to be brushed, that he was afraid of being kicked, and that he got more water in him if we poured it over his food.  Small changes of facial expression and body language were important.  These techniques will also help you if you adopt an older cat.  You really have to get to know them, on their terms, before you can start to adapt their behavior to fit better with your family.  Knowing what they hate and love really helped.

We tried calming pheromones on him but that didn’t do much.  What helped more was sitting on a soft blanket for a few days and giving it to him for a bed, keeping in mind how much cats like cubbies and boxes.  One of his safe places is under my desk, back in the foot well, in the room that doubles as his resting room and my study.

In the below photo, you can see Shinji actually coexisting peacefully with Nezumi the calico!  They have lots of room to run around in now that we have a house instead of an apartment, and he gained roughly a kilo since living with us.  His fur is the softest I have ever felt and he loves to be petted.  Even though he’s 16, he acts as if he’s half that age and we expect to have many years of joy with him.  I should note that his previous people fed him a very high quality diet so I am trying to continue that tradition, as I know that is partly what has caused his longevity. 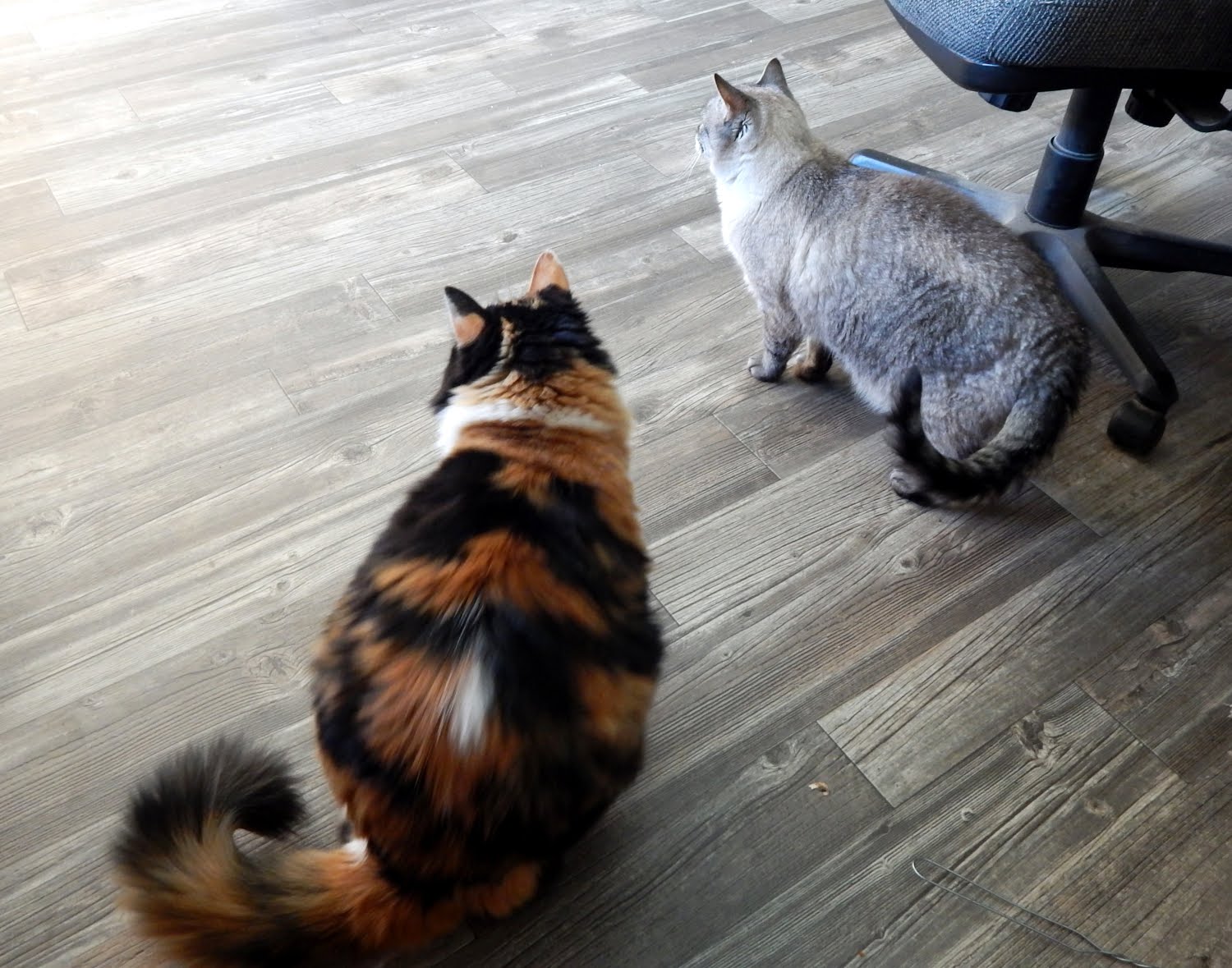 His break-throughs came in stages, and at this point he is a very cuddly boy who gets along relatively well with my calico, doesn’t steal food as often, and loves to sleep alongside me at night.  He has really bonded with me and follows me around the house whenever possible.  The truest way to success was careful observation combined with consistency, communication, and lots of love.  We also continued to give plenty of love to our calico, making sure she knew she wasn’t being replaced.  That helped somewhat with the feline rivalry.

When we brought Shinji into our home, it was something of a gamble, but we’re happy to have him and we find him a wonderful and loving companion.  Every time I see a smile on his furry little face, or a twinkle in those bright blue eyes, I can see just how far he’s come.

If you’d like to read more of my articles, short stories, or see some of my art, please stop by https://mind-flight.org.