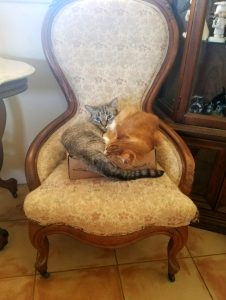 Boo-boo was a  Lynx Point Siamese.  He’d been living with his human Mom for the past seven years, and had been adopted from the local animal shelter.  He was a friendly boy who liked other cats, was very affectionate.

He was 13 years old but still spry and he loved spending time with his two feline friends.

Then disaster happened – his human Mom passed away.  He didn’t know what was going on, everything turned upside down.  Eventually, he and his feline friends were taken in by his Mom’s daughter and-grand daughter, who tried to give him a good home.  They petted him and took good care of him, but they also had dogs, and other cats who tried to steal his food, and everything was different, and Boo-boo didn’t like that!

Then both of his best friends got sick and passed away.   Now he didn’t even have anyone to cuddle with.  Out of grief and confusion, Boo-boo started peeing on the couch – the nice, expensive couch – and was exiled to the backyard when he wouldn’t stop.  Winter was coming.  His people gave him a box to sit in with a nice blanket, but but Boo-boo found a spot of his own where he could sit away from all the dogs.  He didn’t play, he just sat and grieved for his lost friends and Mom.

He didn’t know it, but his Mom’s grand-daughter was trying hard to find him a home.  Nobody wanted a now 14 year old cat, though.  Everyone already had animals, or couldn’t have others, or couldn’t have any.  He’d just be put down if brought to the animal shelters and nobody wanted that.  Yet, what could be done?   So Boo-boo still sat in his back yard, avoided dogs, and simply existed.  One day though, the grand-daughter brought good news along with his evening meal.

“Boo-boo,” she said, “I may have found you a home.  They are nice people, I hope you like them…”  She sounded hopeful, and she petted him.

Days passed, and one sunny morning he was caught and put into a funny plastic box that smelled like cat.  It had a soft pad on the bottom and he could see out of it, so it wasn’t too bad, but then he was loaded into a big car with a bunch of dogs riding along, and he didn’t like that much.  They all rumble-bumped out to who knows where.  Then the box was shaken a bit, and given to another set of hands, and he heard new voices.  He was put into another car, and there was more rumble bumping, and more kind voices.

He yowled whenever the car stopped, but each time he was told “not yet, boy, but we’ll be home soon,” so he quieted again.  He wondered if he really was going home.  The people in the car didn’t sound too bad… what were they going to do with him, he wondered?

Finally, after more riding in the box (he’d made a mess in it and wanted OUT!) he was carried into an apartment with cool, tile floors and no couches.  It smelled like cat and good food.  He was finally let out of the box.

Boo-boo hid for quite some time, at first eating and drinking very little.  He had a little room of his own where a bunch of art supplies were kept.  He also had food, water, litter box and toys, his blanket and a warm place to stay, and no dogs – that was better than the backyard, at least – but he still didn’t know what would happen to him.  Gradually he crept out of the room a bit and started to explore.  Then, one evening, the two New People were talking and he heard a word that sounded good too him.   Much better than his old name of Boo-boo. 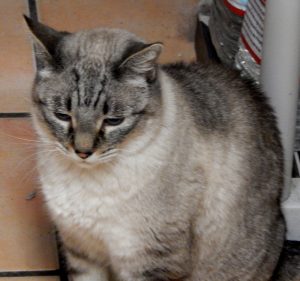 It was clear the two people were talking about someone else, but he still liked the name, so he came to it.  They started calling him “Shinji” after that, or sometimes “Shinji-neko,” or “Shinji-kun.”  They kept telling him he was beautiful, and their fluffy 11 year old calico named Nezumi didn’t smack him too much, so over the next several days Shinji started settling in.

One night, Shinji had enough.  It was the middle of the night and he was bored and lonely.  He started yowling his heart out, half expecting somebody to be mad at him for it.  After all, he didn’t know these people.  They might just be pretending to be nice.   Soon the door to his room was opening and the shorter one of his new people was in there with him, not a bit of fur on her, asking him what was wrong.  He shied away but she petted him.

Something snapped inside Shinji and he bumped his head against her hand.  She kept petting him and sat down on the floor nearby.  He went around and around her, accepting pattings and head skritches, rubbing his scent all over her, marking her as his.  Soon he was purring his heart out.  He knew he might, just might, have found his NewMom. 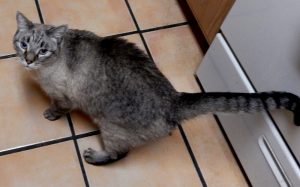 Shinji has been with us for a few months now.  It’s been a long process of adjustment but he accepts quite a bit of affection from me, and occasionally will allow himself to be petted by my spouse.  I happen to have that pheromone that causes cats to be more prone to like me.  I sometimes call it the Cat Magnet Gene, but have determined that it’s probably a pheromone.  In any case, our 14 year old, old man is much happier now, more active and will even occasionally sleep on the bed.  He has the energy of a much younger cat, showing the benefit of his Old Style Siamese genes and also the good food he’s had for the last several years.

Our calico, Nezumi is slowly accepting him in that glacially slow way some senior cats have.  I hope everyone who has the ability and patience considers adopting an older cat – in this case I think we were saving a beautiful spirit who might have grieved his way to an early demise.

A few words on adopting an older Cat

The first key to a successful adoption is making sure the transition is as easy as possible by finding out as much as you can about your cat-to-be.  I’m sure I drove my friend crazy with asking her questions about Shinji’s likes, dislikes, habits, needs, etcetera. 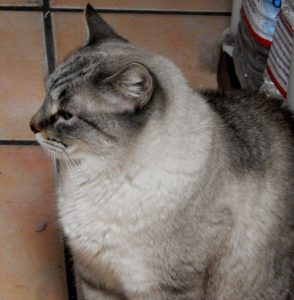 Also, it does help to explain things to the cat you are trying to adopt.  They may understand far more than you expect.

Use all the usual tricks, such as making sure they have something with a familiar smell, not to change their food too quickly, and give them a secluded place they can adapt in at first.

If you like, find more of my writing, artist tips, health information, and cat-lore at http://mind-flight.org