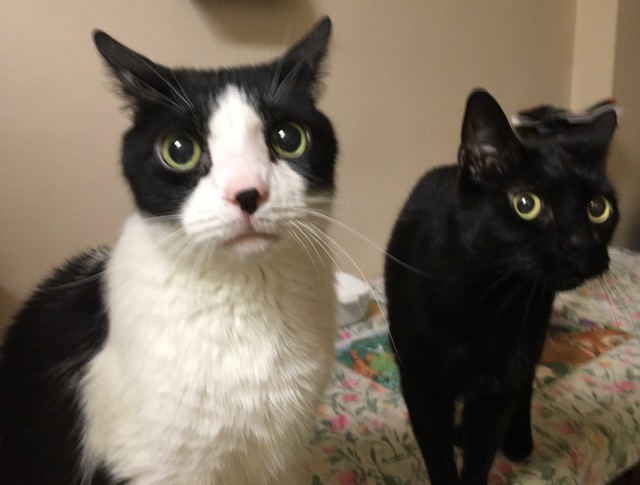 Our names are Carrie and Wilder. We were born in an oversized, heavy duty dog carrier–enough to give any kitten an inferiority complex! But not us. We descend from a long line of street cats, and we’re tough. Our biological mother was a friendly feral called Sugar who lived in the backyard of a kind-hearted, animal-loving couple. They provided daily feedings, fresh water, and eventually added the custom-built shelters for our colony of about a dozen felines that became our second home when Mama moved us from the dog carrier to the more dignified “cat condo” across the yard.

Before we were born, our colony was discovered by local TNR advocates who gradually Trapped, Neutered and Returned our newly ear-tipped and vaccinated relatives to the colony. But Mama Sugar was in an advanced stage of pregnancy–with us! So it was decided to let her give birth, raise and wean us before getting spayed. 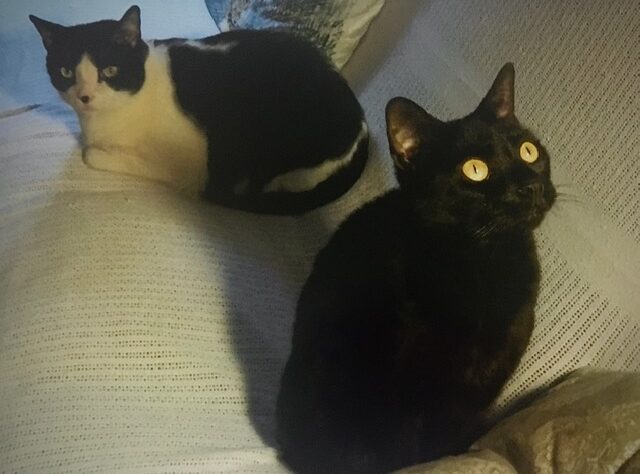 She chose to have us in the straw filled dog carrier. That very day the human caretaker who eventually adopted us got her first quick glimpse of the four of us cuties. None had Mama’s exquisite tortoiseshell fur; two were black, one black and white, and one calico.

As soon as we were able to eat on our own, two of our siblings were adopted by nice people. Then the caretaker was persuaded to foster us to get us “socialized.” Lucky for us she fell hook, line and sinker for our kittenish charms and decided to become our adoptive mother; her home became our third and forever home. That was 12 years ago.

But all was not smooth sailing. At the relatively young age of 8 years I, Wilder, developed diabetes. Although always larger and stockier than my sister Carrie, I was certainly not obese. Nevertheless, I was given a special diet and had to have insulin shots twice a day. Over time, we’ve been able to reduce my dose of insulin and I’ve slimmed down. Turkey is our favorite flavor of cat food because it’s like Thanksgiving every day.

About our names: when my sister was small she liked to be carried, so Mom called her Carrie. My mischievous personality led Mom to exclaim frequently that I was wilder than any cat she’d ever had (nothing to do with famous playwright Thornton Wilder), so she named me Wilder.

Mom still takes care of neighborhood feral cats, including our Aunt Tuxie and Cousin Patti; but we know who she loves best. Mom feeds us from pretty vintage plates every morning and night. Life doesn’t get better!

One thought on “Guest Cat Story: Home Is Where the Heart Is – The Story of Carrie and Wilder”