Please note that this article contains images might be upsetting to some!

Gin traps have been illegal to set in the UK since 1958 – but a cat in Pembrokeshire was left with serious injuries by one of the devices.

The feral tabby cat was found by a member of the public in Stepaside village in their shed on Saturday (26 June) in severe pain with his leg caught in the trap.

Local residents said they had seen the cat over one week prior with an object attached to his leg – but sadly couldn’t find the animal until the following Saturday despite a forensic search of the local area.

The cat – who was nicknamed Tonic by vets – was rescued by RSPCA animal rescue officer (ARO) Ellie West and raced to vets in Carmarthen. 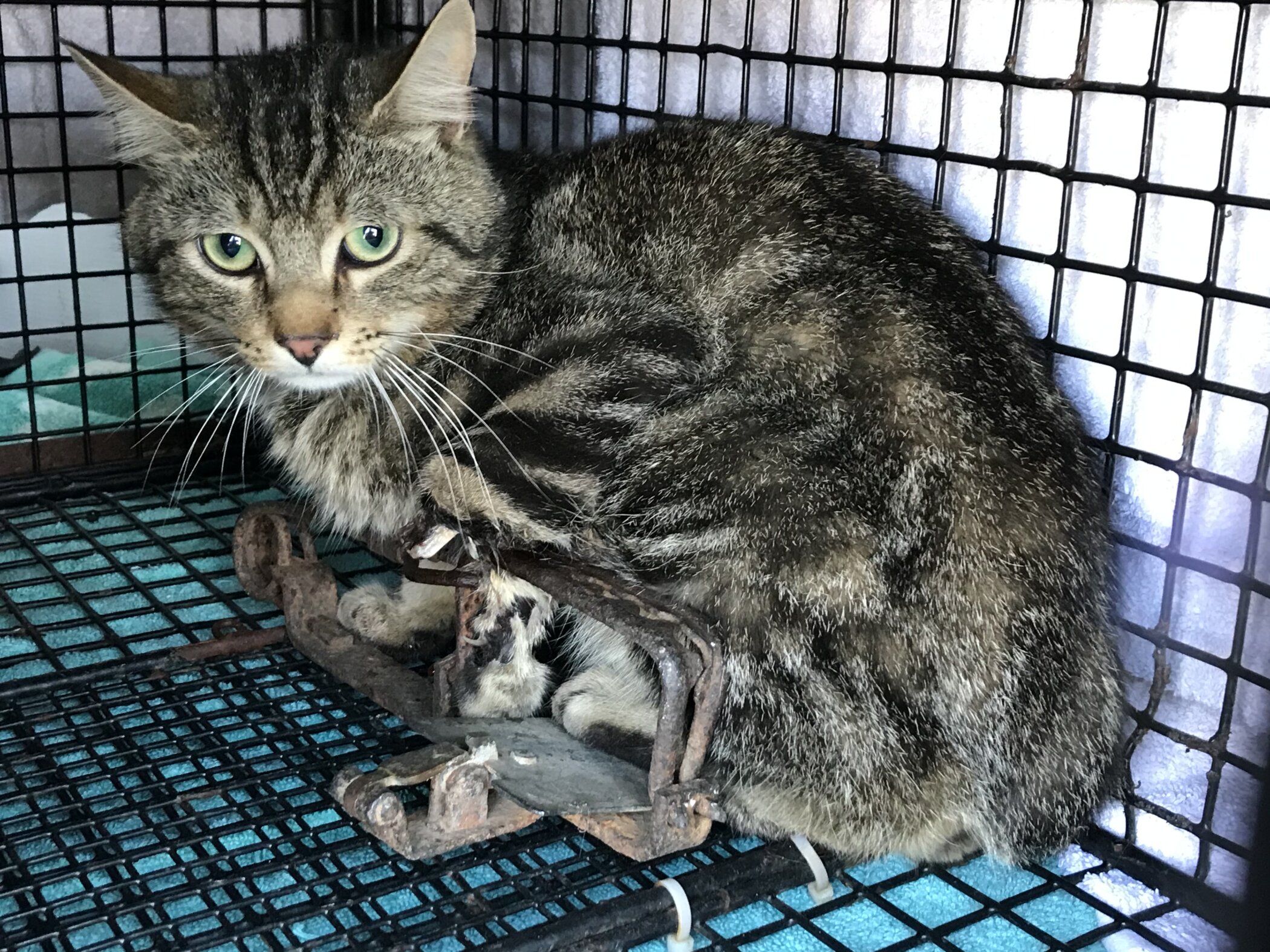 Shockingly, vets found the cat’s leg had already amputated itself as a result of the trap – but the “barbaric device” was still attached to the cat by skin. Maggots dropped out of the cat’s wounds into the RSPCA officer’s van as she transported the distressed animal.

Gin traps are mechanical devices used to catch an animal by its leg, using spring-operated jaws with teeth or a serrated edge. The trap used in Pembrokeshire is illegal to set and use, although not illegal for somebody to own or sell.

Vets fully amputated the cat’s leg from the shoulder – and he immediately went on a course of medication and fluids over the weekend.

The cat has now gone into the care of the Cat Rescue West Wales charity – who are hoping to tame the feral cat and get him into a position where he can be rehomed; something ARO West acknowledges will be a “massive task”.

Financial assistance for the cat’s treatment has also been provided by the RSPCA’s Pembrokeshire branch.

RSPCA Cymru say the incident highlights the damage which gin traps can cause; and has issued a reminder that these devices have been illegal to use in the UK for more than six decades.

Members of the public with any information about who may have set the trap have been urged to contact the RSPCA’s inspectorate appeal line on 0300 123 8018.

ARO West said: “This barbaric device sadly seems to have caused this poor cat immense pain and suffering over a prolonged period of time.

“As soon as we got the call, we were able to rush this cat to local vets who fortunately were able to completely remove the leg and get this cat urgent medication and fluids.

“The trap had caused so much damage that the cat’s leg had practically amputated itself and was hanging off by its skin. Maggots fell out of this poor cat’s wounds as I transported him to the vets. I am just so relieved this poor cat was eventually found.

“Gin traps have been illegal to set in the UK since 1958 – and this incident reminds us of the horrendous damage they can inflict, including to animals like this cat.

“We’re so grateful to Cat Rescue West Wales, who now face the massive task of taming this feral cat and hopefully getting him ready to be rehomed. The RSPCA’s Pembrokeshire branch has also provided generous financial support to assist with this cat’s care. Fortunately, this story might yet have a happy ending.

“But this poor cat’s pain and misery could have been avoided if someone hadn’t set this trap. If anyone has any information about who could be responsible, we’d urge them to contact our inspectorate appeal line on 0300 123 8018.” 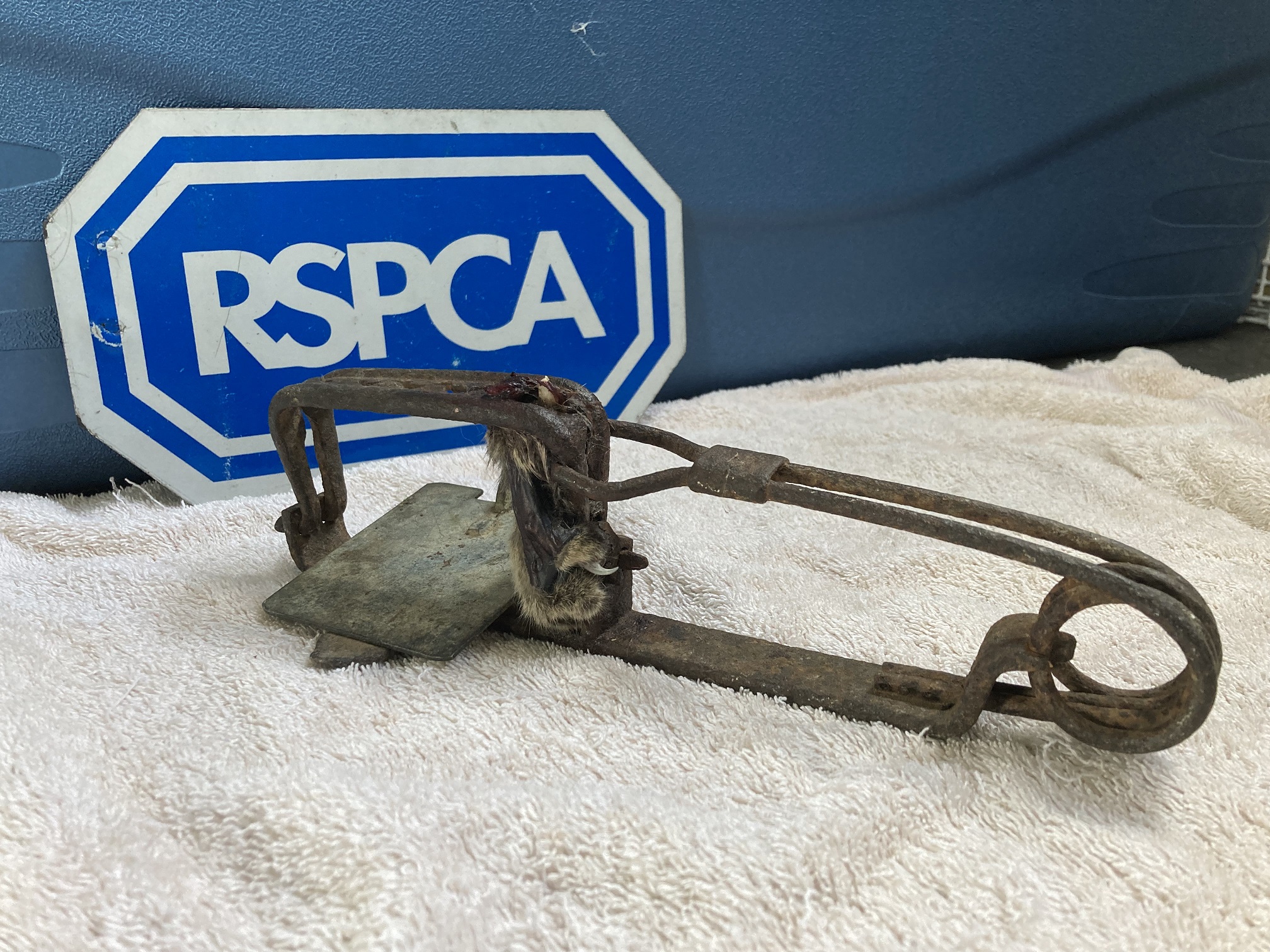 Jane Belson from Cat Rescue West Wales added: “We’re so appalled by the injury that Tonic has suffered as a result of being caught in this gin trap.

“But we’d like to reassure the public that he is convalescing with one of our dedicated cat fosterers and receiving lots of attention.

“Vets have done an amazing job in surgery to give Tonic every chance of a full recovery.”

Should you wish to support the RSPCA with work such as this, you can donate online.