This Valentine’s Day, Battersea is looking back on some of the strangest pairings to have blossomed inside the much-loved animal charity’s iconic gates.

From cuddly kittens and lovable Labradors to little and large dogs falling for one another, Battersea has seen its fair share of friendships over its 160-year history.  Becky MacIver, Rehoming and Welfare Manager at Battersea, says: “Over the years, we’ve played Cupid for so many dogs and cats.  Not only have we helped find them their perfect human match, but we’ve also seen animals find love in one another, too.

“Our Battersea love stories show why every rescue is worthy of a second chance.”

Ava was just a few days old when she was found as a kitten, abandoned in a London garden. Thankfully, she was rushed into Battersea where she was quickly cared for by the charity’s expert veterinary team.

Being so young, Ava needed to be fed every few hours and spent a lot of her time in the Battersea clinic office, where she met Battersea’s Head Vet Nurse’s rescue dog, Barney.

The Labrador took his role of kitten-sitter very seriously and the pair became the best of friends.

These days, Ava is living a life of luxury with her new family on the British coastline. 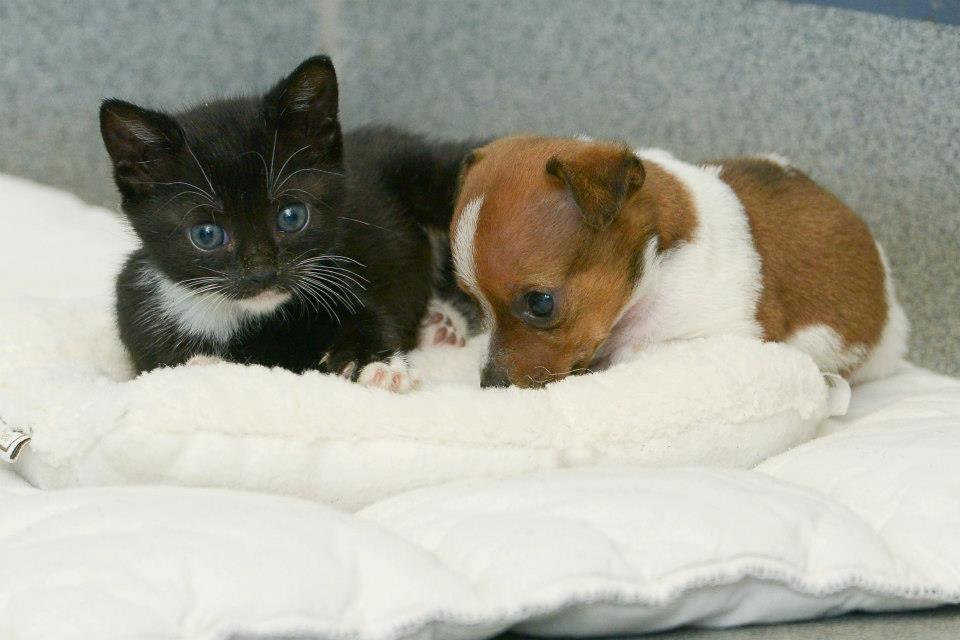 Kitty and Buttons hit headlines back in 2011 when the puppy-kitten duo formed a close bond. Kitty the cat was brought into Battersea’s Old Windsor centre by a kind-hearted member of the pub​​lic who found her alone in a garden when she was just one day old.

To keep the tiny kitten company, Battersea staff put her together with Button​​s the Jack Russell, who was born at the centre but rejected by her mother as th​e runt of the litter.​

The inseparable duo ate, played and slept together and it wasn’t long before they found their happily ever after, and were rehomed together to a family in Colchester, Essex.

Just like their cinematic namesakes, Thelma and Louise were inseparable. The two best friends were found wandering in a park together, skinny, scared and no one to rely on but each other.

Terrier Louise and Saluki Thelma were soon taken to Battersea, where staff gained their trust and helped them build up their confidence before they finally found their happy ending.

Throughout the 2020 lockdown, a Battersea rescue dog was busy helping to hand rear a tiny kitten named Boris, who had been rejected by his mother at just two days old.

Beagle Duke was adopted from Battersea in 2016 after being found as a stray wandering the streets of Guildford. His owner, Laura, helped to hand raise a kitten during lockdown, and thanks to her and Duke’s loving care, little Boris grew into a big strong cat and found a new home of his own.

Despite Duke’s unusual and grumpy looks, he enjoyed playing and providing snuggles for his tiny best friend, proving that beauty is purely skin deep.

Buddy and Lady came to Battersea together after their owner found themselves unable to care for the pair anymore. This Staffie and Mongrel had a love so strong that they decided to put it in writing and got married on national TV show Loose Women as ‘Prince Hairy and Meghan Barkle’, in celebration of the 2018 Royal Wedding.

Buddy and Lady found a retirement home together where they could live out the rest of their days happily ever after.

To find out more about Battersea’s work, visit battersea.org.uk

3 thoughts on “Fur-bidden Love? Battersea Celebrates Some of the Oddest Couples to Blossom Inside its Gates”