The following story was sent in by Kim Marie O.:
Here’s a picture with both of my Aunt’s Black Cats. (she has 4 cats total the other is a russian Blue named Kitty,  and a dark ginger tabby named Rylee !)
They’ve slept with me on the couch (my preferred place to sleep as I usually stay up for as long and late as possible there.
If I’ve slept too long the cats Particularly Rylee will come and lay down on my chest and start rubbing my face. The others will start to gather around as well.
(With me instead of a regular time I’d rather the cat tell me its time to eat, though my Sully wasn’t always obvious about it being feeding time, even around the regular time)
Molly when my aunt got her had an eye infection and I think it was 2 summers ago when I watched them. Molly always seemed to have a black dot in her eye from the infection and sadly the infection was back and sadly she had to have the eye taken out. This has not impeded her. She still jumps up on the upstairs bathroom sink for water from the faucet (which I’m sure she learned from Rylee when she could get up there).
Cali has taken over Rylee’s top cat spot although if you ask me Rylee reminds her she’s boss. Anytime Rylee hangs out on the couch or near me on the floor she swats anyone who comes by (except maybe for kitty). Cali also jumps amazingly high, at least as far as I’ve seen a cat jump anyway. I love playing with her with the laser and making her go up the first 2 stairs to the landing near the closet, as she jumps up  toward the window there. I swear one of these days she’s going to hang from the windowsill (or at least I’m trying lol)
They are 2 playful kitties, they’ll take their own toys out of the toy bowl. (Scared the crap out of me the first time they did that or were playing at night with their squeaky penguin as I put it in the bowl. I guess I’ve watched too many horror movies and thought it came to life or something! 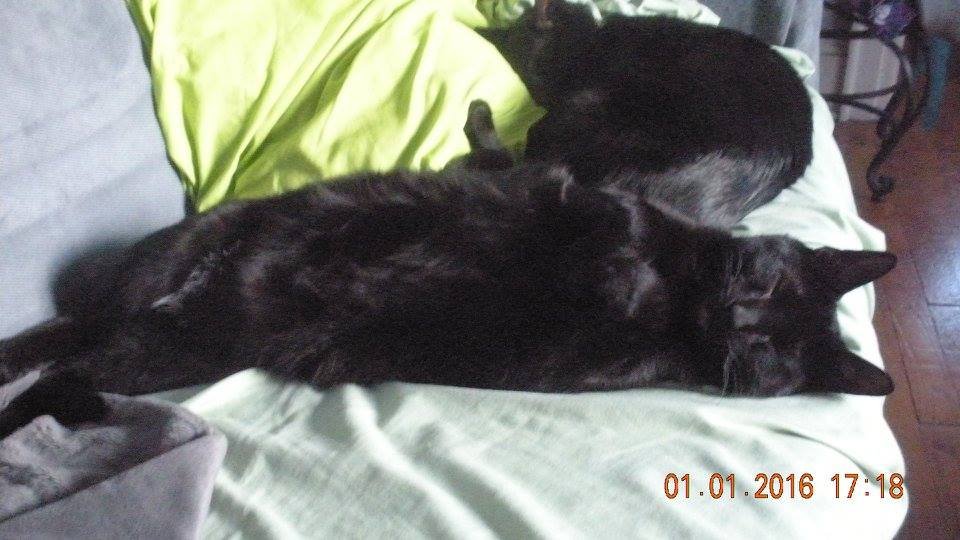