Please find below a guest story from Kate and her cat Beau the blind cat:

So on the 10th October 2017 we became aware of Beau, he was with our local Cats Protection charity, he had come in as a stray it seemed he had been a stray all his life. We don’t know if the reason he had lost his sight as a result of being a stay or because of a congenital defect, but there was nothing that could be done to save his sight. 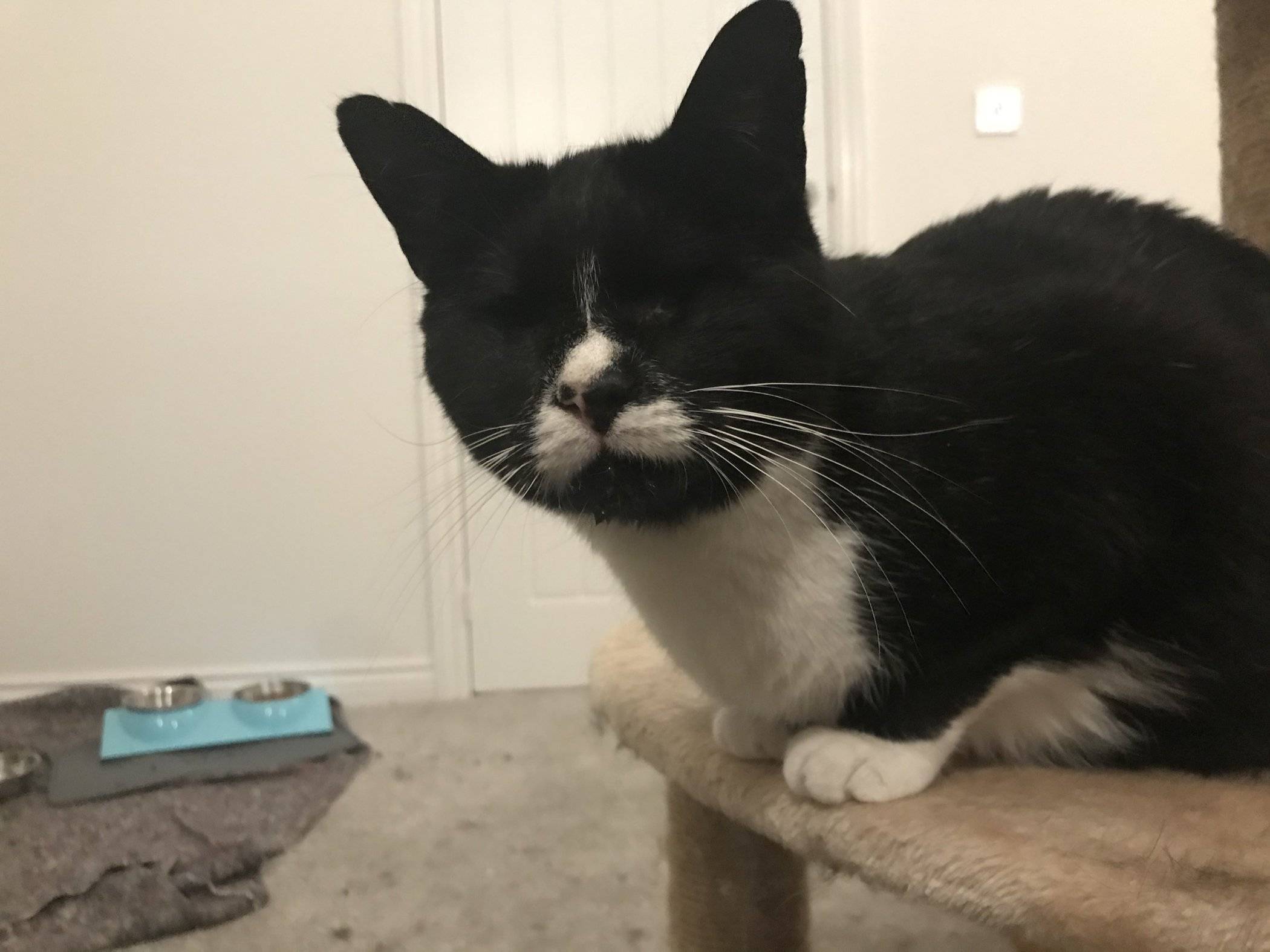 We started to follow Beaus story on their Facbook page, and once he had been to the vets and had his operation and was well enough they started to look for a home for him. On the 14 Novemeber they put a post up saying they were looking for a home for home, the thing is a lot of people wished him well, but there were very few people who actually came forward for him. We already had two cats, one of them from Cherwell Cats Protection who is Alfie who also has a condition called CH, where in simple terms he is unsteady on his feet (walks a bit like he is drunk). Both of ours are indoor cats, and for Beaus safety it would have been an indoor home he needed.

After talking it through, we did ask if they thought he would get on with our other two, and it was not certain if he would integrate, so we left our name with them saying we would be willing to give him a home.

On the 22 November, a video was posted up of Beau playing with toys and that he must have heard other cats playing in their pens and that maybe he was happy, its difficult to tell, he was shy and withdrawn. We enquired again and this time we said we would rehome him, it was his chance of being in a warm loving home. In the beginning of December, we brought Beau home, and there our story with Beau started.

We researched how to keep him stimulated and found he really liked catnip (as most cats do!) we had catnip coming out of our ears! We then got CCTV installed in the room he was in and then we started to see a totally different cat, he was playing and then he would sit up in the window listening to the birds outside.

We started a Facebook page so people could see him, as we were always being asked about how he was doing. Some days it was hard, I kept on thinking had we made the right choice for Beau giving him our home and our love, he didn’t like human company, but if it hadn’t of been us, who would have rehomed him?

Fast forward to March 2019 we were moving to a much bigger house, this would mean all three of our boys would have more space, and once we had moved we put them in the biggest room in the house all together, this is where the transformation happened for us, we had seen small bits of progress, but in the last 4 months we have made massive progress. Beau comes to us, he wants the affection, he wants to be loved, he wants to be brushed and he wants to be with his brothers. Woody our eldest boy I think actually looks after him, he ushers him into a hiding corner if the hover comes out or he hears a noise he doesn’t like Woody will usher Beau into a corner and sit with him till the coast is clear.

Our boys are indoor cats, so stimulation is key to happiness, we have found that they love valerian filled toys the best, they go mad for them, dribbling all over the bed or the floor! You can put all their toys in one pile in the room, and when you go in a few hours later the toys have moved!

I can’t say that the last 18 months have been easy, we have worried continually about Beau’s mental health, but we love him, he makes you realise that no matter what disability an animal (or person) has, small changes can make all the difference and if you are happy to be a guardian of them, they will eventually show love and affection.