My kitty is sick.
He’d been on my lap much of the night — not on the bed so we could both sleep.  No…it HAS to be my lap…while I’m on the computer…playing solitaire.  He prefers watching me play Mahjong Titans while he rests his head near my keyboard and, yes, I comply.
Look at that face!  How can you say no to it? 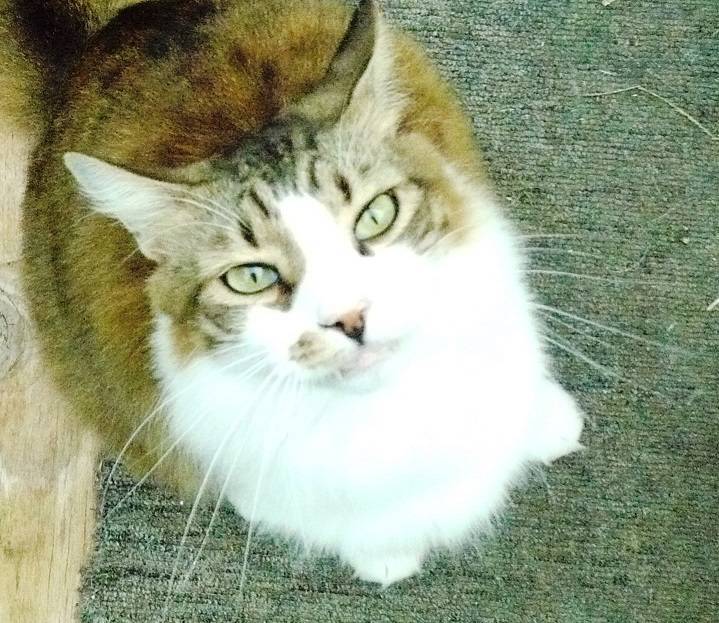 His brother died several months ago.  He became ill quite suddenly and passed away before I could make an appointment with the veterinarian.I kept saying to myself, “Something isn’t right.” But it was during the busiest time of the year for work and I wasn’t paying a lot of attention to anything else.
The Coon Cat Brothers were dumped near our house 8 years ago, two halves of one heart, crying together in the woods.  Coon Cat, the largest of the two, had a teeny little meow, while OBCC has always sounded like a air raid siren.  It was his yowling that caught my neighbors attention.  They fit inside two cupped hands and, until they were 6 months old, they preferred to be in the same cat carrier together.  As adults, Coon Cat weighed 20 pounds, and his brother weighs almost as much.  No way those would fit into one cat carrier. 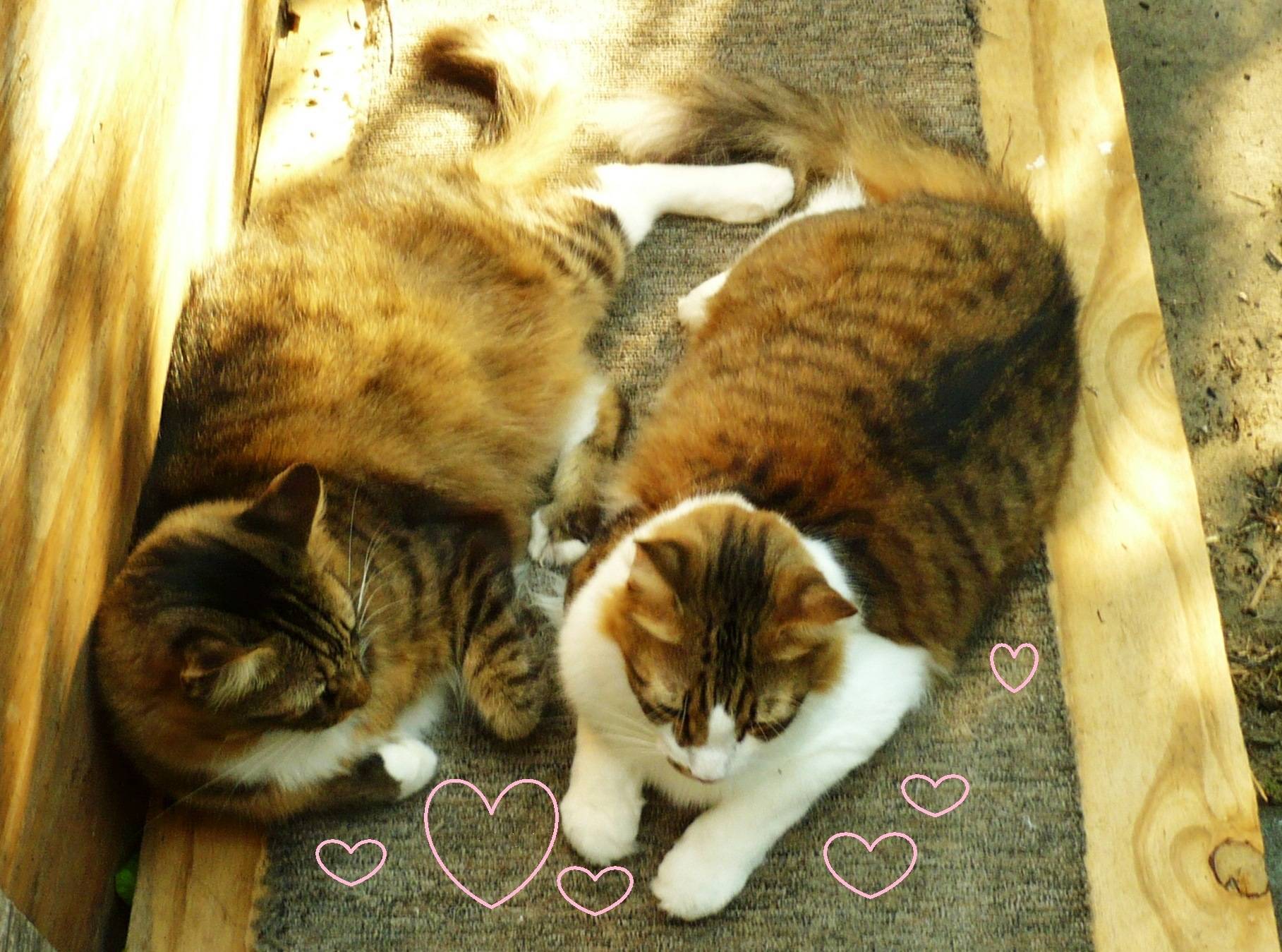 If OBCC’s deceased brother had been an active cat, I might have noticed sooner that something was amiss, but Coon Cat liked to sit on a platform and watch the dogs milling around, rarely expending more than the minimum amount of energy.  The day I noticed something was off, his eyes were dilated and he was more lethargic than usual (translation:  I put food on the counter and he ignored it).
A few months after Coon Cat died, Other Brother Coon Cat (OBCC) started showing the same symptoms. Being the more active (and vociferous) cat, it wasn’t hard to spot the fact that he was lethargic.  There’s something about a cat yowling in your ear that tends to get your attention.
We didn’t see crystals expelled in the urine because the Coon Brothers would either pee/poop outdoors or in a litter box.  We weren’t around to see Coon Cat straining to urinate, but I did see him licking his genitalia a lot. Cat’s always like to show their butts, though, especially if their routine has been upset.
When Coon Cat started urinating on plastic bags, I thought it was because we had just adopted 2 dogs from the local pound (neither the county animal shelter or we could have known that they liked to chase cats) and it was causing him some stress.
After the disaster with Coon Cat, we took OBCC to the veterinarian’s office at the first sign of lethargy and discomfort. A urinalysis for OBCC showed crystals and UTI.  Even though we caught it before the poisons had invaded his system, OBCC was almost out of time.
Diagnosis?  UTI and crystallization that was blocking the urethra.  It seems that Coon Cats, especially males, have this problem more than other breeds.  Once the poisons are in the system, it’s “game over.”  OBCC would have been dead within days had we not rushed him to the vet.
Think I’m overreacting?  Read this  https://www.catster.com/lifestyle/cat-health-tips-5-stages-feline-urinary-tract-blockage-symptoms  In one sentence: Death from a urethral blockage can occur within three days.
The first time I recognized the symptoms, OBCC was in the kitty hospital for 2 days with IV to get fluids into him, and he had to be catheterized.  Then there were several days of medication to take once he was home.  He has special food to prevent UTI’s, but he won’t eat what the doctor wants him to have.  Nooooo…he has to have 4Health from the Tractor Supply store.  I have to find creative ways to get him to drink water — like putting tuna juice or a little chicken broth in it (not the store-bought stuff, but by boiling chicken in water).
Last week, I was taking a shower when the dogs started to play.  He likes to lie on the floor with the doggies, but on that day one of the dogs was playing too hard.  I heard a yelp, a growl, the sounds of a short doggie-disagreement and then MEOW RAUUAAAAAAW!!!
With soap still in my eyes, and not a stitch of clothing on, I ran into the living room.  There was no cat in sight.  For two days, I called to him, walking around our forested acreage and looking for small spaces inside the house where a cat might hide.  And then, finally, after Dad called him for the 100th time, he appeared.  No bleeding, no scratches, just one terrified cat.
I’d be terrified, too, if 50 pounds of dog stepped, or started to fall, on me.
Two days ago, he began to sneeze.  I thought it might be allergies.  Yesterday, his nose started to run and then he stopped eating or drinking.
When he’s not around, I miss the ball of fur blocking my computer screen, and the flying feet that can eliminate an entire 400 page manuscript in a single blow.  What will I do without the face that stares into mine as if to say “FEED ME?” 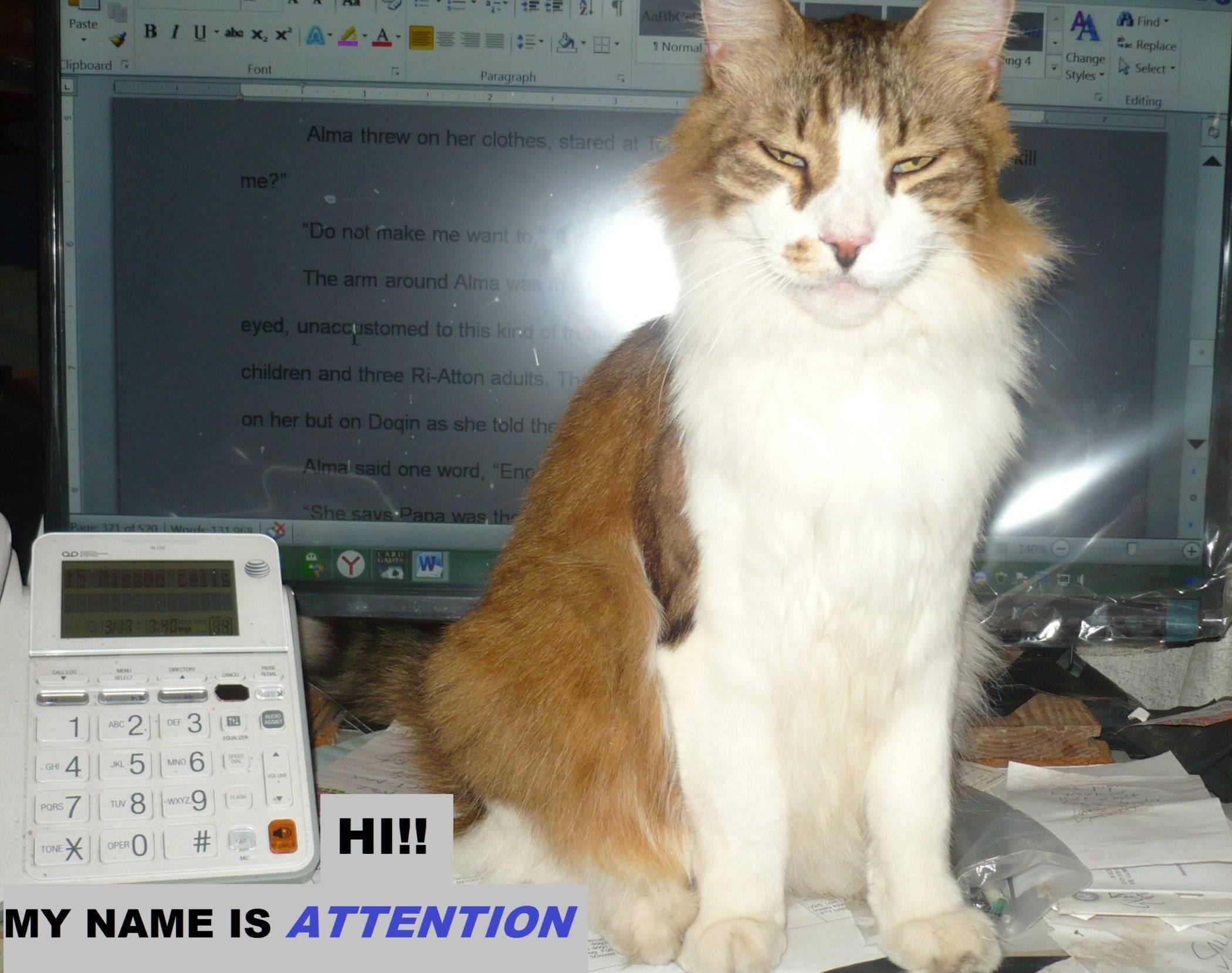 This morning, I cancelled my appointments for the day at work so that I could take him to his 10:30am emergency appointment with Dr. Jeff.  OBCC has an upper respiratory infection and his bladder was quite full but still soft.
Dr. Jeff took OBCC into the catacombs to manually express the urine.   It didn’t want to come out at first, but the slight blockage gave way.  Had I waited another day, OBCC might have had to endure the indignity of yet another 2-day catheterization.
He was given antibiotics to take for the next 10 days and a muscle relaxant to take for 3 days.  $128 later, he is drifting off to sleep, listening to the meditation music he insists that I play for him over and over and over again.
Yes, my kitty is (over)spoiled.  But every time he curls up on my lap and nuzzles my hand for a vigorous petting, I’m reminded of how important he is to me.
Every single minute of every single day he’s worth the time and effort it takes to love him.
Joelle LeGendre
____________________
https://rantingalong.blog/

14 thoughts on “Sick Kitty – How to Spot a Urinary Blockage”