Please find below a guest story by Nora Hamilton:

The Cat No One Wanted

I first saw Pepsi at the cattery where I boarded TinyAnnie, our sole kitty. He was obviously a Ragdoll, a long hair, brown and white bi-color with brilliant blue eyes. He was very handsome. Then a month later he was still there. I said to the cat sitter, “His family travels a lot?” She said, no, he was there from the shelter for adoption. “He’s been here for quite a long time,” she said. “No one wants him.”

I could not imagine why. He was a Ragdoll after all. I watched him. he was not at all afraid, although the other cats always hissed at him and drove him away. 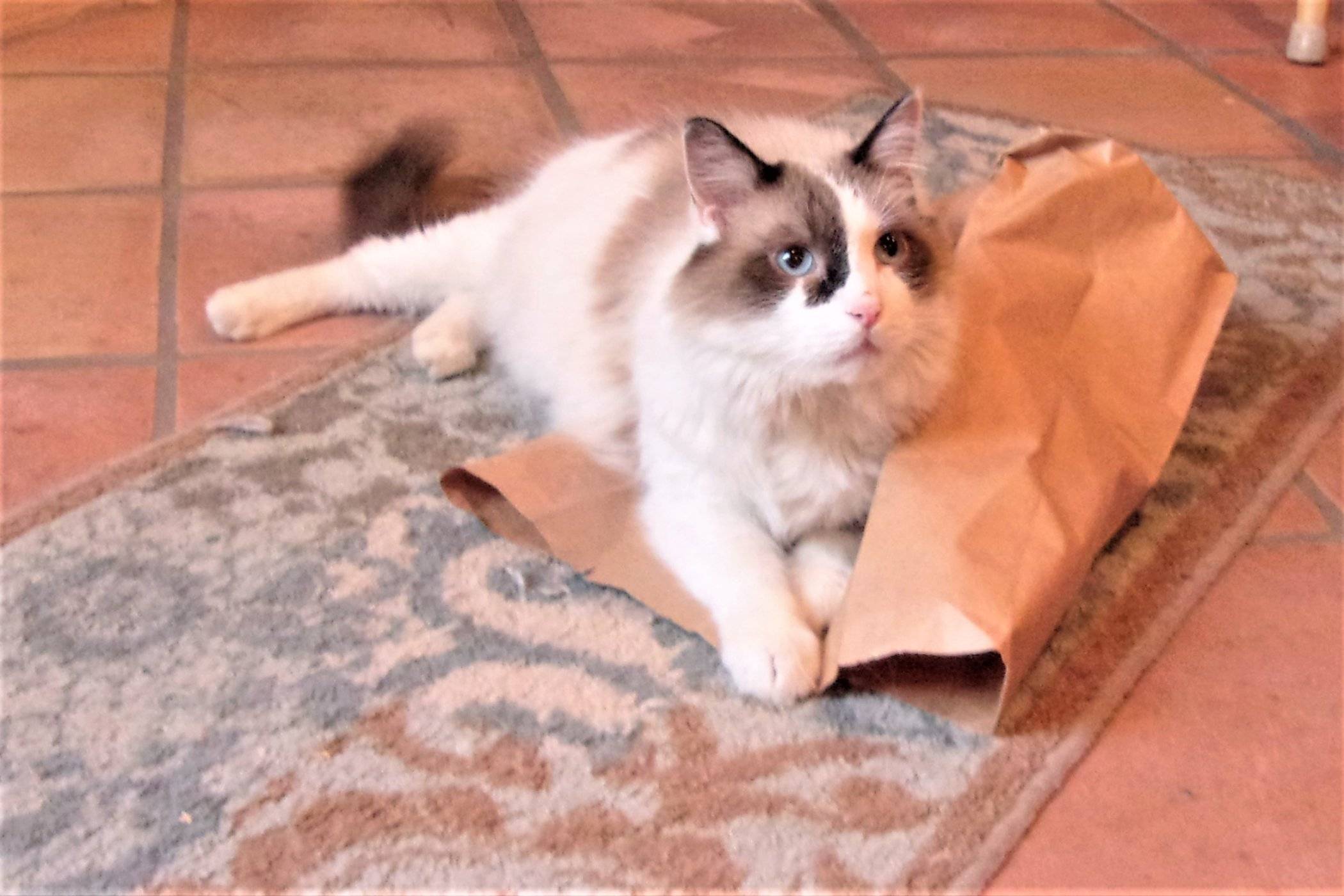 Two years, I was told.

He had never lived in a home with anyone, always growing up in shelters and sleeping in cages. His mum rejected him. I soon saw why. As he walked, his gait was wrong. He picked up his front paws and set them down clumsily, with a thump. His back end tipped and he lost balance easily. When I petted him, he wanted attention but bit my fingers. The cat sitter scolded him gently, “Pepsi! Don’t be so bitey!”

One of the minders tossed a toy for him to chase. He ran after it, but his run was a crazy hop, thunk, hop. His meager hops advanced him a short distance, maybe a foot, and he landed splay-legged with a painful “clumph,” with his hind end sliding sideways onto the floor. His legs weren’t strong enough to hold him up when he landed. He kept this up till he found the toy. Then he batted the toy, yet didn’t seem to know where it went. The minder picked him up on her lap, and he eagerly complied, grabbing her hands to pull them close. He bit her fingers, hard. Ow! Poor little kit, he wanted to be with people, but he didn’t seem to know what to do. 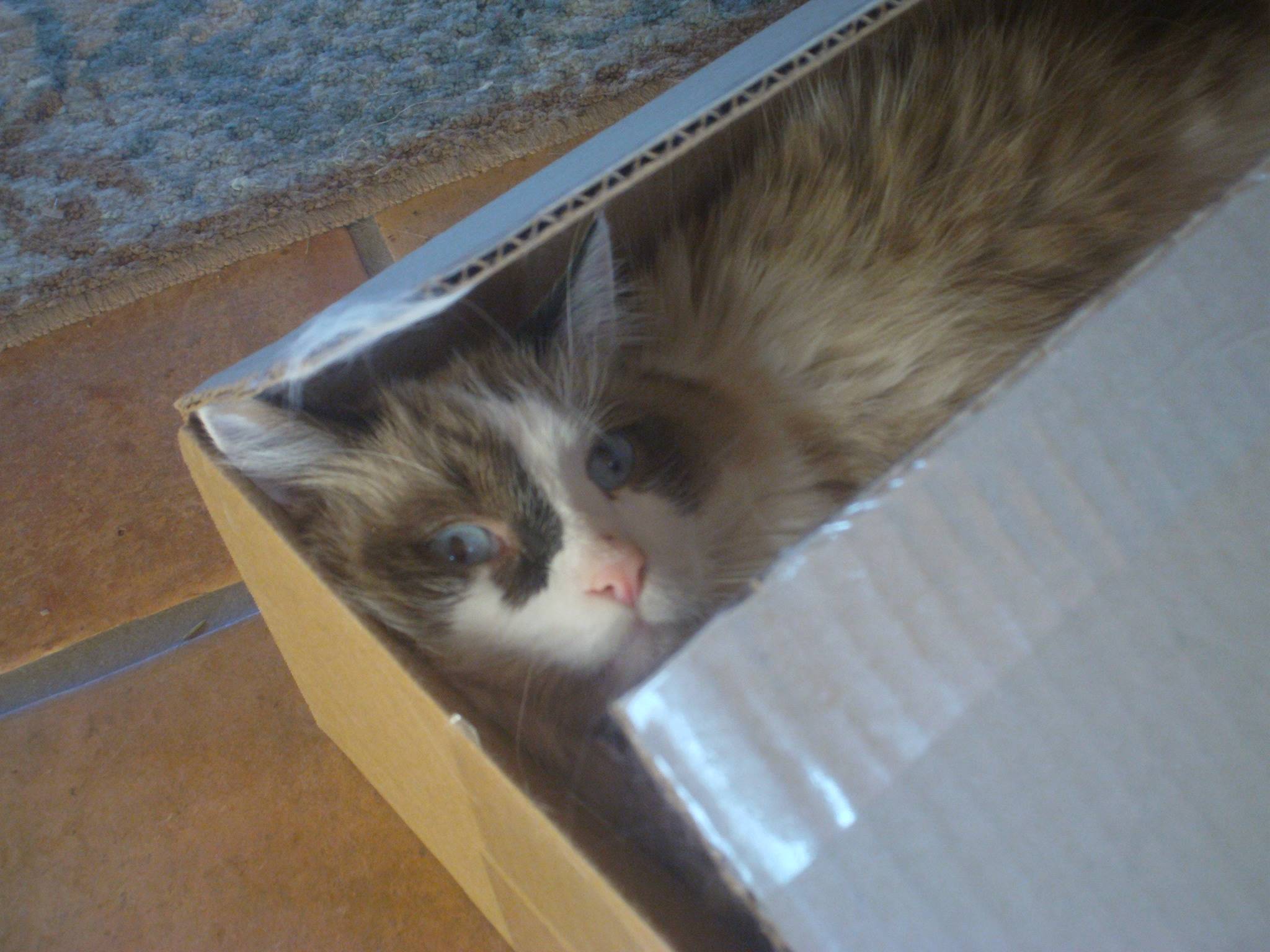 I think it was his eyes. I have a soft spot for blue-eyed cats. I said, “We will take him!”

The cat sitter was incredulous, “Really? You really will take Pepsi?”

I took him home that day. We could see how weak he was, obviously because he had slept in cages all his life. His walk was so unsteady. Tipping over was common for him. He didn’t understand cuddles, although he was very friendly, in fact, anxious for attention. And he had no idea what a bed was! Or a chair! Or a human lap! When he slept, he simply curled up on the floor by himself. 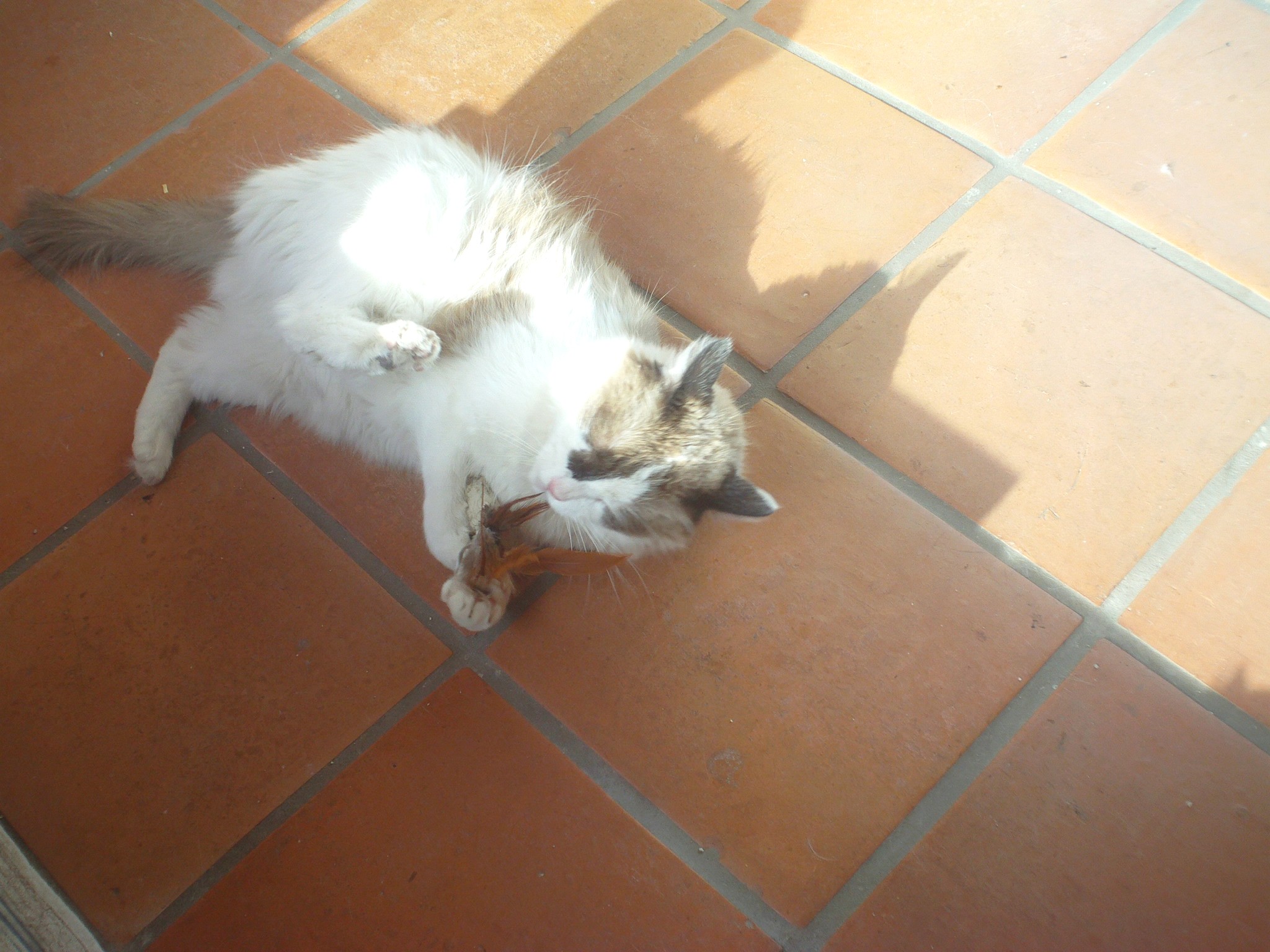 His fur was not soft and silky, so we started fixing that right away. We changed his food to Friskies canned pate. He absolutely loved it. We set about training him to stop biting.

Our girl TinyAnnie would not let him touch her. We learned in our research that other cats drove him away because he was defective. We also studied his disability, and through elimination we decided it must be hypoplasia, damage to his central nervous system that occurred while he was in the womb. It would never get better, but it didn’t hurt, either. That explained the awkward hopping and constant loss of balance, yet always coupled with so much enthusiasm. He was never in pain.

He could not jump up onto the couch or bed. To get on the couch he would recklessly launch himself at the back cushions, and land…well…where ever!

Five years have passed. Pepsi is seven now. He has the complete run of our house, with interior cat doors and human doors to play hide and seek with TinyAnnie. When he wants to hurry, he has a heart-rendingly cute rapid trot, tail straight up, head held high, just like a handsome glittering trotting horse with his soft long fur waving in the breeze.

He hops crazily when he is happy–like after he ate his wet food or when in a game with TinyAnnie. He leaps an amazing six feet or more, and as high as three feet! He hops like he is on powerful springs and yowls excitedly. That’s his version of the kitty “zoomies” and it is so delightfully comical, we can’t help laughing at his happy abandon.

Paper bags? He discovered them, and leaps upon any he finds on the floor and shreds it like a lunatic. Then he lies on the remains and grooms himself. Catnip has been a delightful discovery, wrestling, rolling, flipping and drooling until he’s exhausted. And boxes? He’d never had one in any shelter, but now he lays claim to every box that comes through the door and peers out at us like a mad man!

He seeks our attention and love by climbing onto our laps. Curling up cozily, he snuggles his pink nose into the tummy of whoever he is with. And we rotate him, snuggling on my lap for hours till I have to get up, and then amiably allowing himself to be placed in my husband’s lap, to continue cuddling for hours with his cute pink nose squeezed against his daddy’s tummy, or, more preferably, daddy’s armpit! A beautiful loud purr comforts us as he cuddles. He loves his daddy to brush his long soft fur. Yes, Pepsi has truly discovered laps and lovins, and he can’t get enough of it.

And miracle of miracles, he discovered sleeping in bed with his humans! One night I awoke and found him sleeping soundly on my pillow. When I petted him, he instantly purred. 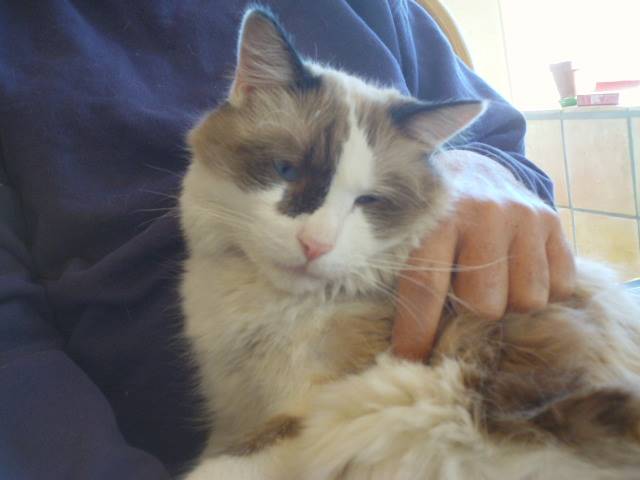 What Pepsi has discovered, now that he has a home with humans that shower him with attention and affection, is total freedom and unconditional love. The shelter people were always kind to him, but he never knew love. We love him like no humans he had ever known. And Pepsi returns our love in full measure, purring and sleeping with us and gazing at us with his lovely bright blue eyes.

He hops so powerfully, and trots proudly. He doesn’t bite. He loves his lovin’s. He stays close to us always, never more than twenty feet away. He found each and every sunny spot in the house, and rotates between them throughout the day. He plays with TinyAnnie. And every single night he climbs onto one of our laps and purrs mightily. He loves this so much he yowls in anguish if our routine changes.

He plays with his toys. He sings after his meals in celebration of his wonderful tasty, squishy food. He has so much love to give, he is simply overflowing with love. And we in turn, have fallen so very much in love with him.

He is no longer the kitty who had never known love.

I still cannot understand why no one wanted him for the first two years of his life. He is our devoted wee cuddle bug—and I know he’s always had that in his heart. Yet he himself didn’t know what that was, until someone came for him and gave him unconditional love, and thus unlocked his own pure and unconditional love.

38 thoughts on “Guest Star: The Cat No One Wanted”