How we are each grieving…

James-Mostly he is patiently taking care of me. He cried…hard…with me that first night. He had finally connected with Zorro, or I should say Zorro finally connected with him, after 13 years of James patiently trying. James just couldn’t understand it as he is such a Cat Lover himself, so I know how much the last few months have meant to him, with Zorro allowing pets and even sleeping by his legs at night. 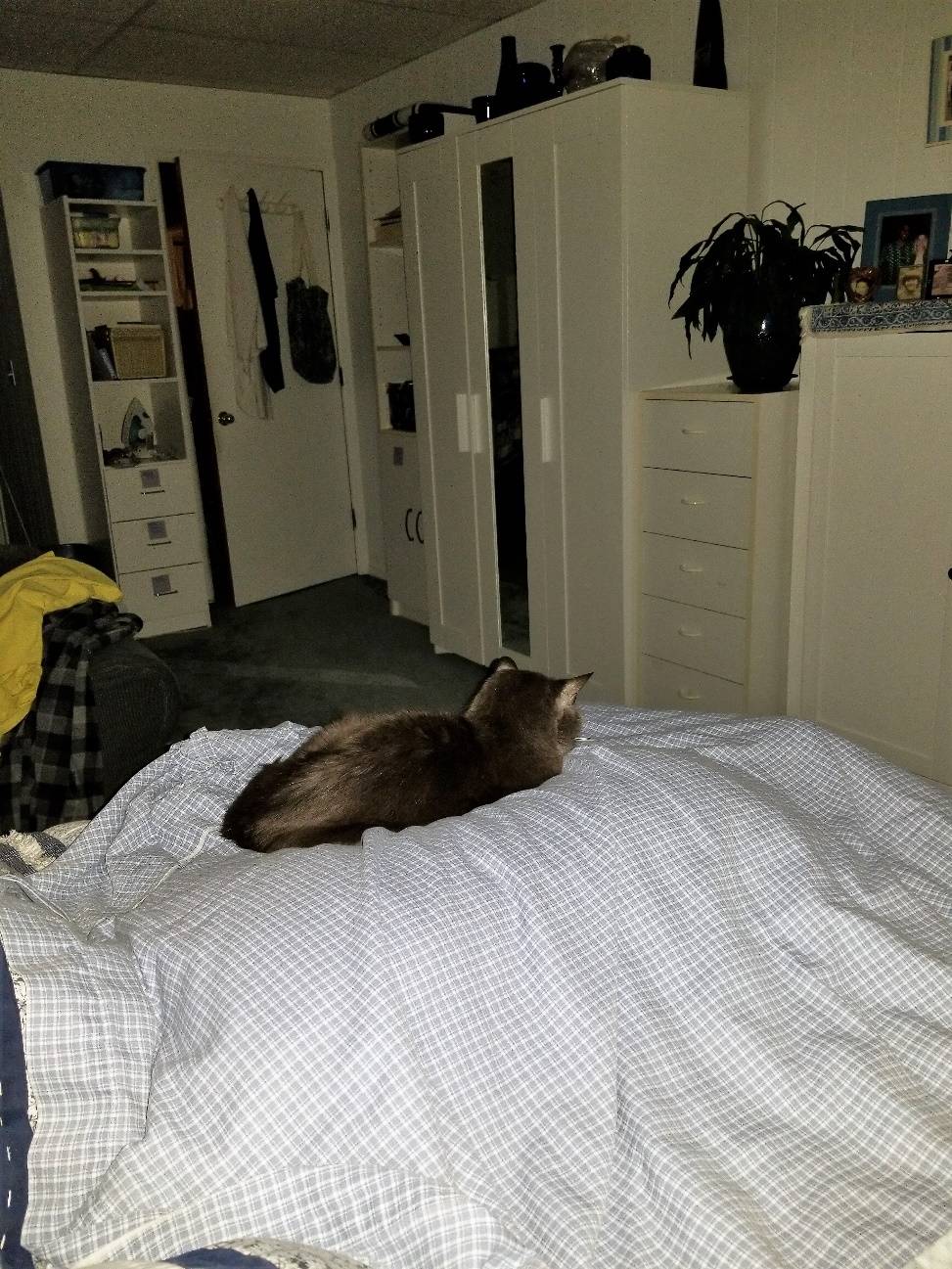 I snuck this photo, so we would have proof of “Z” behind J’s legs

Phineas, the Big Z’s first kitten– In the week after Zorro died, Phineas, completely ignored us. And though normally, he can barely tolerate being in his own travel carrier, he snuggled up in Zorro’s box, non-stop. The first couple of days, he hardly came out to eat, the poor guy. For a while, after he finally came out of the box, he was a lot clingier with his person, James, which is quite a feat, as Phineas would gladly be velcroed to James every minute of the day..

Phineas in mourning the week after Zorro died

Lucy-I think she started her grieving while Zorro was still here. She was so completely bonded with him. In Zorro’s last weeks, she’d try to get him up and moving, so they could play. 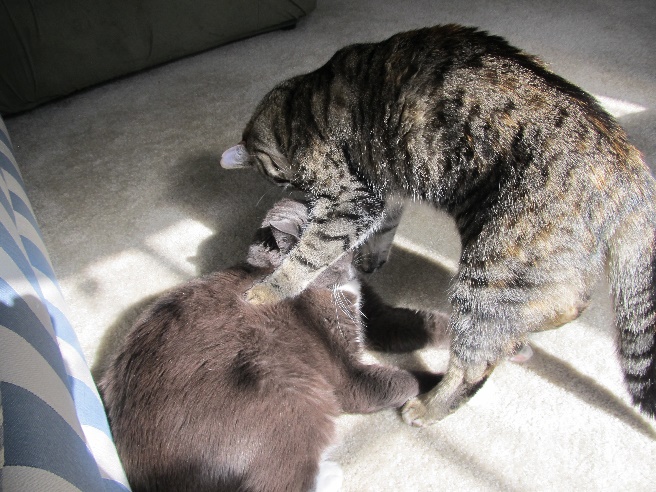 But in his final days, Lucy rarely left his side.

I’d find her simply sitting by him, watching over him.

The very last time Zorro climbed into his carrier (for a familiar, but dark hiding place, I suspect), I moved it right next to my bed. He crawled back out and climbed up on top of his box and lay just inches away from the very corner of my bed where he had slept with me every night for 18 years.

On his last night, he made his way back down into his box and Lucy climbed right in there with him.

I leaned over for a quiet peek, not wanting to disturb their moment, and she was cleaning his face and ears, just like she had done ever since she was a small kitten.

That first week without her Buddy, Lucy was very clingy with me, taking breaks only to spend time sniffing his old places, and then, as if to take up his mantle, she started watching over me quite a bit. I let myself cry whenever I felt it and from out of nowhere, she was always right there, hopping on my lap, and, no kidding, paws up on my shoulders. It occurred to me that she would make a great therapy cat…very sweet and sensitive.

None of us have been in Zorro’s chair….

As for me, I was fairly immobilized for a time by the whole thing. I was not just grief stricken. I was exhausted. I miss him so much, in all the ways I knew I would. All those years ago, when my professional life crumbled and my friendships dried up or flew off to different parts of the world, it was just me and Zorro…and that continued throughout several stages and changes in my life…just me and Zorro.

Here’s what I wrote recently to my adopted daughter, who lost her own Heart Cat a while back.

A new day… But I woke up reaching for him. I guess that will just keep happening…until it doesn’t.

I’m remembering a time, many years ago, when you were staying here with me. We were getting ready for bed and you noticed Zorro sitting outside the bathroom door while I was brushing my teeth and said, “that’s so cute. He’s waiting for you.”

He was. And he did. Everywhere, all the time. And now when I come in from feeding the crows, or from finishing in the laundry room, and he’s not there, I get smacked with another deep wave of grief.

In the last few weeks of his life, I’d have to open the laundry room door very slowly because he couldn’t get out of the way very fast. Now, he’s not there, but I still open it so slowly…you know, just in case….

What a silly time to miss him so damn much.

And bless his heart, right up until the end (when he didn’t even need to anymore) he’d crawl, rest, and crawl some more, all the way from “his chair” into the kitchen, and around the corner to his litter box.

There have been some surprises in this grief. Lucy and Phineas are being very patient with each other. They could even end up friends after all.

And I remembered something from a few years ago, when my best friend’s mother died after a very lengthy illness. Her husband (my Second Dad) said the strangest thing to me. He said, “Oh Honey, I miss my patient.” I had no idea what he meant. But the last few months, and especially these last weeks, Zorro was my top priority 24/7. I am having the hardest time readjusting to the freed up time his departure has left me. I don’t like it. I don’t want it. I don’t even remember how to fill it.

I barely understood how much of my daily interaction with other living beings was with my dog, Zorro.

I can only guess how much more of a loss it must have been for Tad to lose Lucille after his 5 years of daily, of hourly care for his beloved “patient”. Once, when Lucille first became bed-ridden, I asked Tad how he could do it, how he could spend his days and nights right there by her side, and he simply said, “It’s my turn. That’s all.”

I guess that’s a little how it was for me and Zorro, too. After all the years of him being my “dog”, watching me, waiting for my direction or command, waiting to serve me, in the end it was simply my turn, that’s all.

He did hang around just long enough for me to have a shift…from grieving his pending departure, to grieving how long it had to take him to go.

Thanks to Linda and Lee. Best gift EVER!

I knew our first trip without Zorro across the mountains to our retreat north of Spokane would be difficult.

We go several times a year. Usually James took Phineas and Lucy, but Zorro always rode with me, his carrier belted into the front seat right next to me where he could see me, and we could “talk”. He knew the drill and rarely complained during the ride.

When he was a kitten, he went everywhere with me in the car, free to “roam about the cabin”, until that incident I described before, when he got trapped in the car for days. From that time forward, the only way he would go anywhere was in a carrier. Not one of those cardboard ones from the Veterinarian’s. He’d chew his way out of that almost instantly. I think his record was 16 seconds.

And getting him into it in the first place was quite an accomplishment. He was not nick-named The Slasher for nothing.

He’d stay pissed off for a while after we arrived. The mountain place is a much more cat-friendly setting than at home and there were several places Zorro could get to that made him completely inaccessible.

Remember my desk drawer? In the mountain house, what started as a perfect place to disappear, eventually became his favorite spot for privacy from the two younger cats, who were always way more rambunctious there than at home. Because our Retreat is mostly wood walls, railroad ties and mine shaft beams, the cats could tear around the place and literally climb up the walls.

When we first arrived, sure enough, both Phin and Lucy darted around, looking at all of Zorro’s spots, and then as I was setting up my desk later, sweet little Lucy flat out broke my heart. When I opened the drawer…Zorro’s drawer, she jumped right in and hunkered down. She must have sniffed that drawer for 6 full minutes…every square inch of it!

And then, just like when she was a kitten, she laid down to sleep, but now alone.

He’s not there anymore Sweet Girl……………