It seems that GPS pet tracking is definitely a hot market right now, so when Marc at Katzenworld asked me if I would like to trial a new GPS tracking device on one of the many cats of my acquaintance I jumped at the chance.

The device in question is the Petpointer (Available for pre-order on the Katzenworld Shop), a Swiss made GPS pet tracker, and I was hoping that it would offer the same quality and precision as some of the more well-known watches the Swiss are famous for.

When the box arrived, I admit I was a bit daunted by the array of items it contained. However, looks can be deceiving and on further inspection this is what there was: the Petpointer Tracker; two batteries; a charger and cable; a protective sheath for the tracker; a safety collar and a number of fastening strips to be used to attach the tracker to the collar. The tracker also comes with a very user-friendly guide.

I headed straight for the tracker and was immediately impressed by its size and weight. 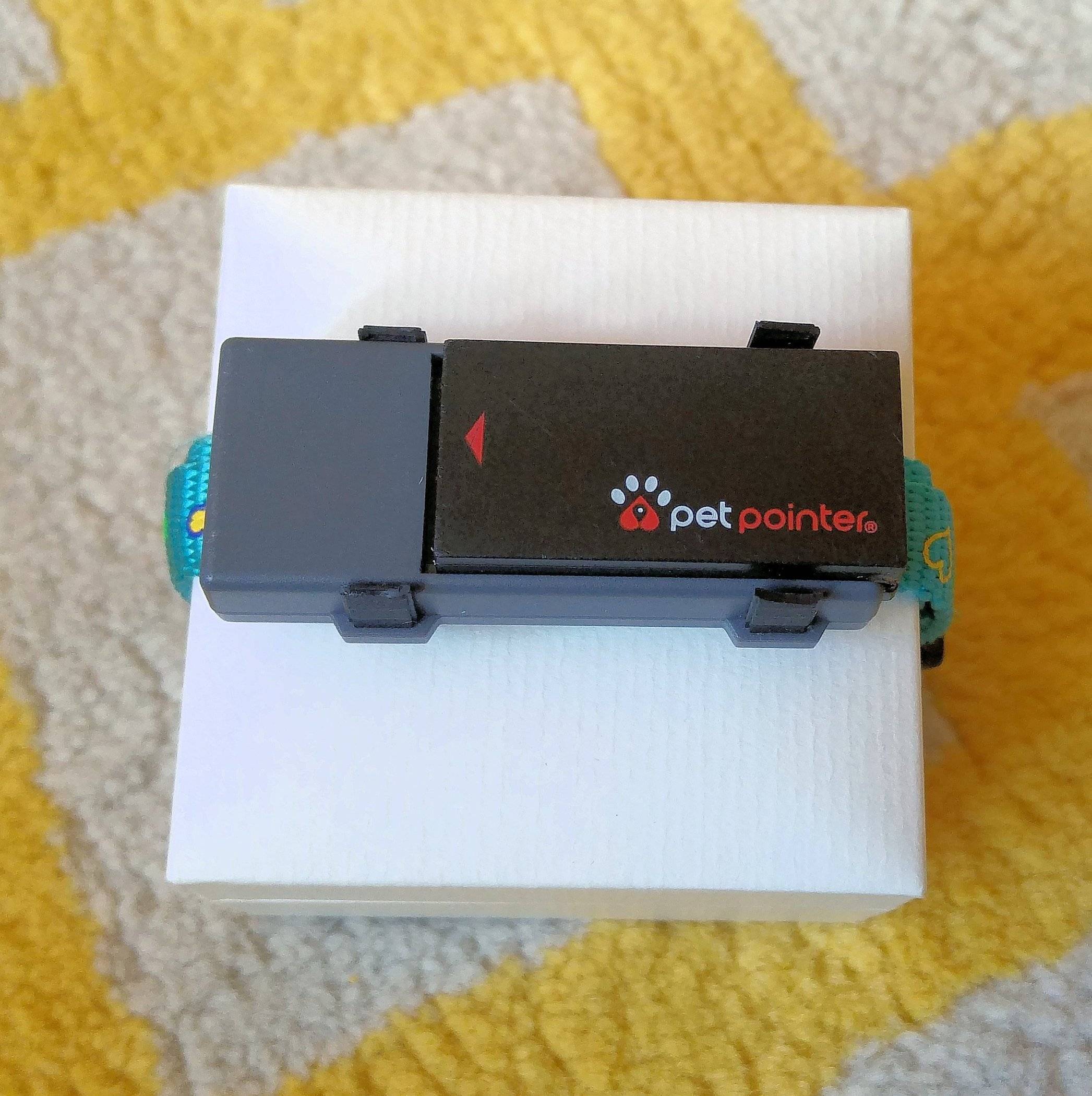 In the world of cat trackers size really does matter, with small and light being the holy grail. The company that makes the Petpointer claims that it is currently ‘the world’s smallest tracker for household pets’ and whilst I didn’t have any other trackers to compare it with, it certainly was small and incredibly light.

So far so good…

My next task was to charge the battery. All that was required was to pop the cable supplied into to a USB plug (I used one I had at home) and plug this into a mains socket. The other end of the cable plugged neatly into the charger.

The battery slides into the charger and there’s an arrow showing you which way to insert it. 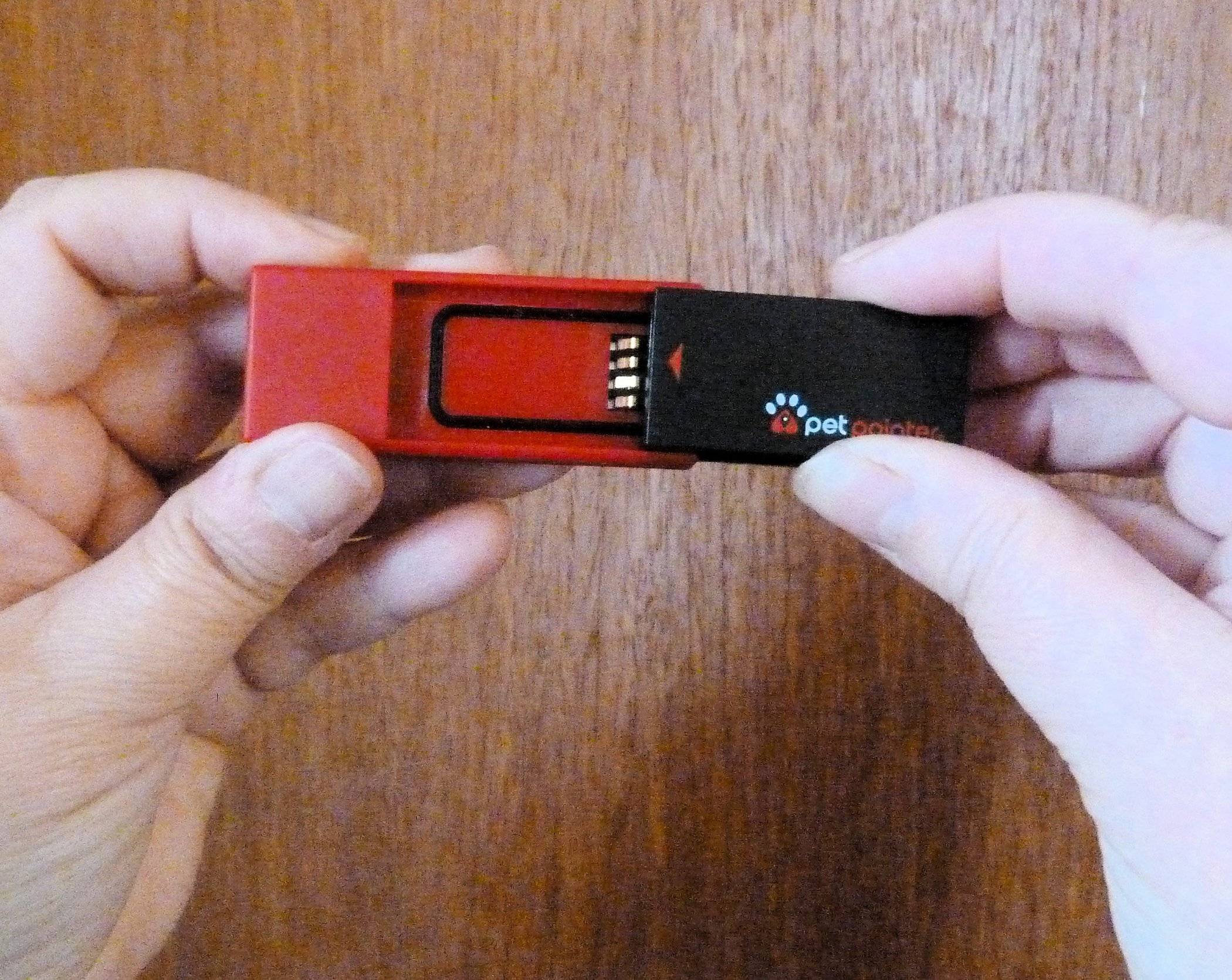 I went away and left it for about two hours and when I came back it was fully charged. Over the course of the trial I found that each battery lasted around 2 days, but I imagine this would vary depending on which tracking mode you use (more on this later). However, there are two batteries supplied, so it’s just a case of charging one whilst the other is in use. And there’s no need to remove the cat’s collar when swapping the batteries over, as they simply slide into the tracker in the same way they do the charger.

Whilst the battery was charging I visited the Petpointer website to the register the device. This is just a case of entering the product’s unique serial number and creating a username and password.

With the battery charged and the product registered I could now pop the battery into the tracker and fit the device onto the collar.

A word about collars. If your cat doesn’t already wear one, it’s important that he’s given time to get used to one before adding any tracking device to it. Safety collars are a must! They work on a quick release mechanism which prevents injury should the collar get caught on an object or a cat gets a front leg stuck through the collar.

Fitting the Petpointer tracker to collar was a case of threading the fastening strips through holes in the tracker’s casing then looping these around the collar. Whilst this was slightly fiddly, the good people at Petpointer had this covered by including multiple fastening strips, just in case!

By far and away the longest part of the process was adjusting the collar so that it fitted our cat tester perfectly. ‘Big T’ lived up to his name and there was a moment where I thought we might need to get a bigger collar!  However, after several attempts, we finally got the size right and Big T had a funky new cat accessory.

Time for full disclosure here. ‘Big T’ is a home-loving kinda guy, and whilst he enjoys the great outdoors, he makes sure his creature comforts are never too far away. Later on you’ll see the full extent of his territory! 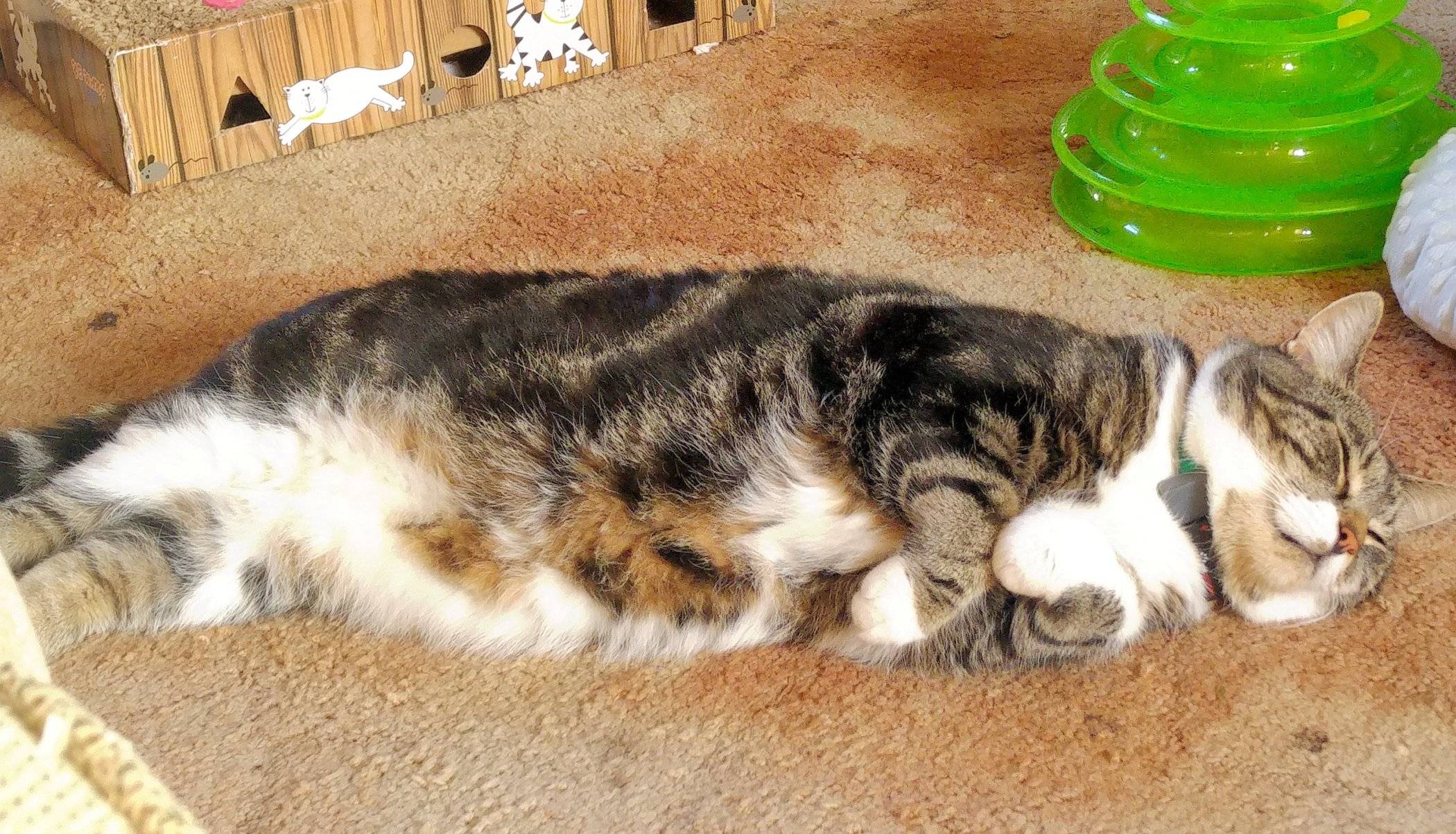 Back to the tracker which didn’t look too large on Big T and he seemed completely comfortable wearing it. 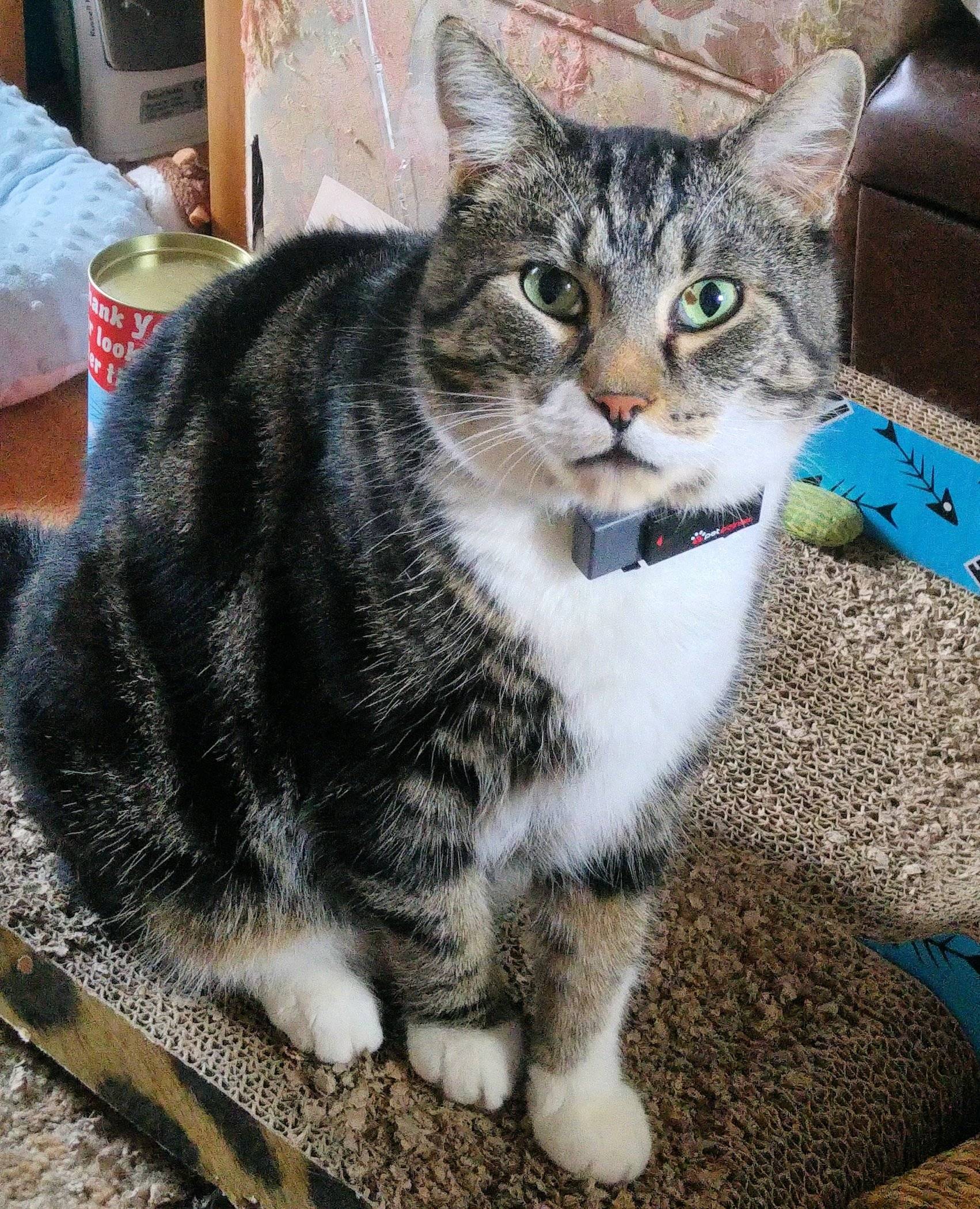 For size comparison purposes I tried it on my teeny-weeny Siamese cat Billy. He’s never worn a collar, let-alone one with a plastic box on it, but it’s so light that even he didn’t seem phased by it, despite it looking rather large on his skinny neck. 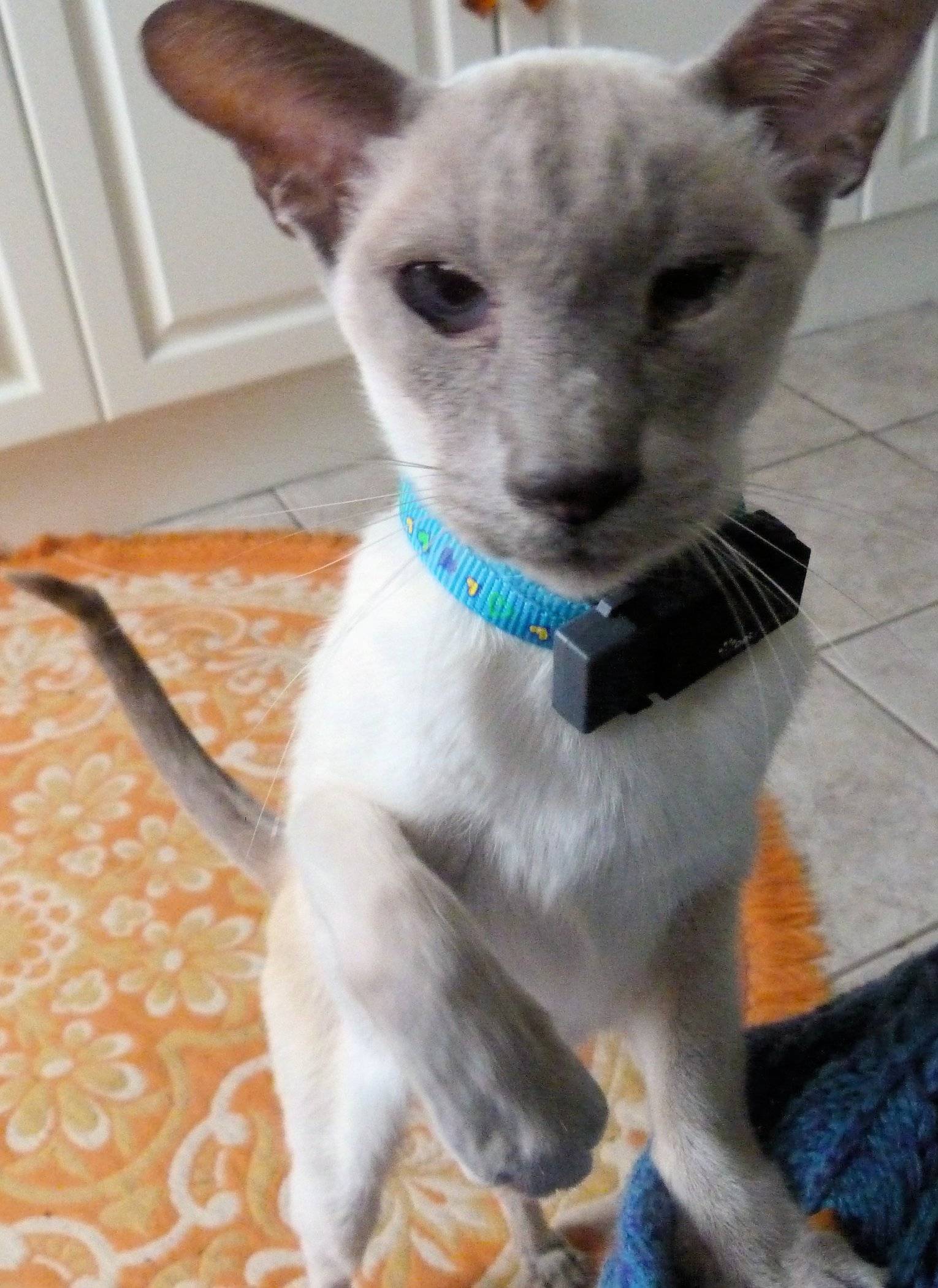 With the tracker now in place on Big T’s sizeable neck, I then downloaded the Petpointer app and during the entire time I used it, I found it to be very reliable, both on my Android phone and my Windows 10 laptop (it’s also compatible with IOS devices).

The interface and functionality took a bit of getting used to, but practice makes perfect and it wasn’t long before Big T’s owner Pauline and I were having fun tracking Big T’s every step. You can personalize it by uploading a photo of the cat being tracked which gives it a nice feel. 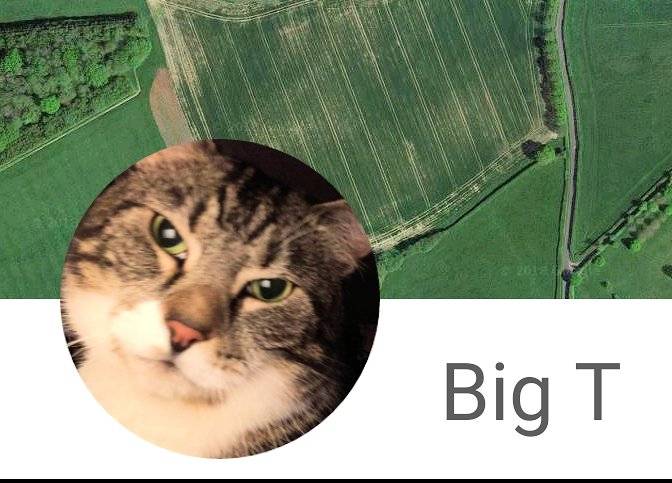 You can also choose from different types of map such as terrain; street or (my favourite) satellite. This give a Google-Earth style view of your cat’s wanderings. 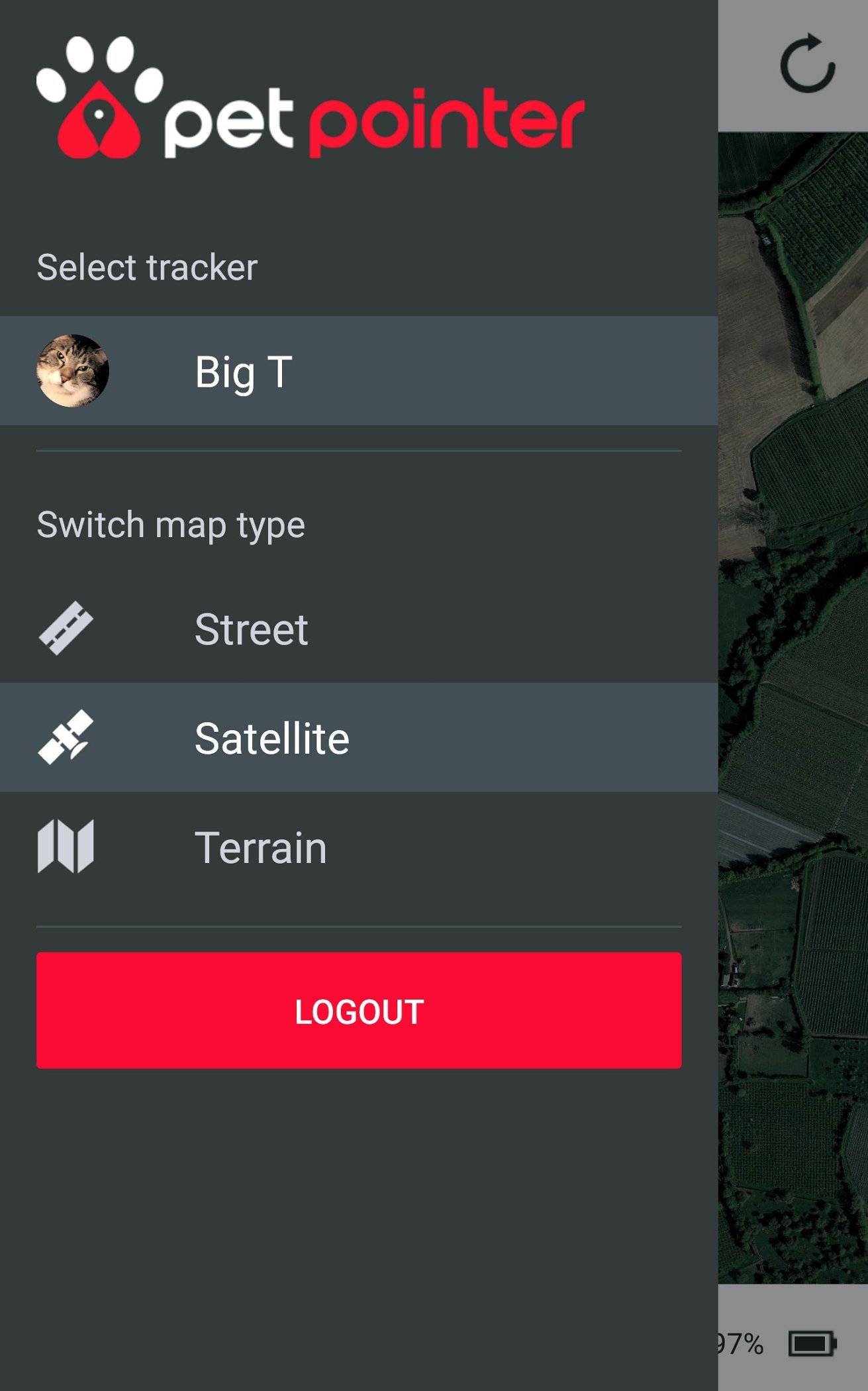 In order for you to see your cat’s movements on the map you can select from either a pointer and lines or a heat map. There’s even an option to animate a pointer to reflect the route your cat has taken. With each view you have the ability to zoom in and out.

With an Interval function that can be changed from full tracking mode (although I suspect this might use up battery life more quickly) to tracking movements at intervals between 5 minutes and 4 hours, the Petpointer tracker app caters for every type of cat owner from the most neurotic to the more relaxed.

The app also gives you two types of historical information via it’s History function. One is an overview showing where you cat has been on any given day, in our case, up to a maximum of 10 days which was when Big T started wearing the tracker. The other displays a time-line against which is a list of co-ordinates showing where Big T had been during the preceding 24 hours. For example, if I wanted to see where he was at 10am, I just clicked on the coordinates against that time and a pointer on the map would show me his location. This type of information would no doubt be invaluable in situations where a cat has gone missing.

You also have the ability to activate a geo-fence. This is a ‘virtual fence’ which gives you the ability to set boundaries. Every time your cat crosses the boundaries you will be sent an email. I’m not sure what you’d do with this information if you’re away from home, but nevertheless, it’s quite nifty!

Something that did puzzle me was why the Petpointer App showed two types of navigation technology: GPS and GSM. I knew about GPS but was unfamiliar with GSM. A quick look at the help section on the Petpointer web site enlightened me. When a GPS signal isn’t possible, due for example to poor weather conditions or the cat being indoors, the device tries a GSM signal which relies on mobile phone antennas.  This type of signal is far less accurate and merely serves as general orientation until a GPS signal can be retrieved.

If you have a large feline family several Petpointer trackers can be managed within one account.

Pricing is arranged in the same way as it would be for a contract mobile phone ie a charge for the device as well as monthly data charges. According to the Petpointer web site the Tracker costs 89.90 euros. The monthly service fee varies depending on which part of the world you’re in, but as an example for England it starts a from £3.65 per month. I have it on good authority that the company is still busy arranging their distribution network, but it will soon be available to pre-order from the Katzenworld Shop, so keep an eye out for it!

I wasn’t sure what to expect from a GPS Tracker but found myself becoming easily addicted to checking Big T’s whereabouts. This was made easy by the performance of the tracker and reliability of the app, not to mention the different types of very useful functionality it offered. Charging and battery swap were also a doddle. The tracker did its job efficiently and in my opinion the peace of mind it provides makes it a good investment.

Interested in getting this tracker? If you are in Switzerland you can order it directly from PetPointer and for the rest of the world you can pre-order it directly on Katzenworld. Pre-orders will be fulfillied in December.

I am an accredited Cat Behaviourist and freelance cat writer. running one of the very few cat-specific Behaviour Practices in the UK.

I have own and run Honeysuckle Cat Toys, an award-winning small business selling toys for cats made from Tatarian Honeysuckle wood. My slices of Tatarian honeysuckle wood are a fragrant and completely natural toy which offer wonderful enrichment for all cats, young and old, and provide a great alternative to catnip and valerian toys. Now available to buy for the very first time anywhere in the UK, Honeysuckle Cat Toys has been voted Best Cat Toy in the Your Cat Magazine product awards for 2018/19.