Today’s guest post was send in by one of our Twitter friends Angela Mongusall and it’s the story of her cat Nubia. Of course when our own black cat Nubia found out about the fellow Nubia she was most excited! : )

Please find the guest story below:

I volunteered for a cat rescue and found it most rewarding.   I got a call about a mama cat and her babies living in the bushes at a local park on a busy street.  I set up the traps and waited… 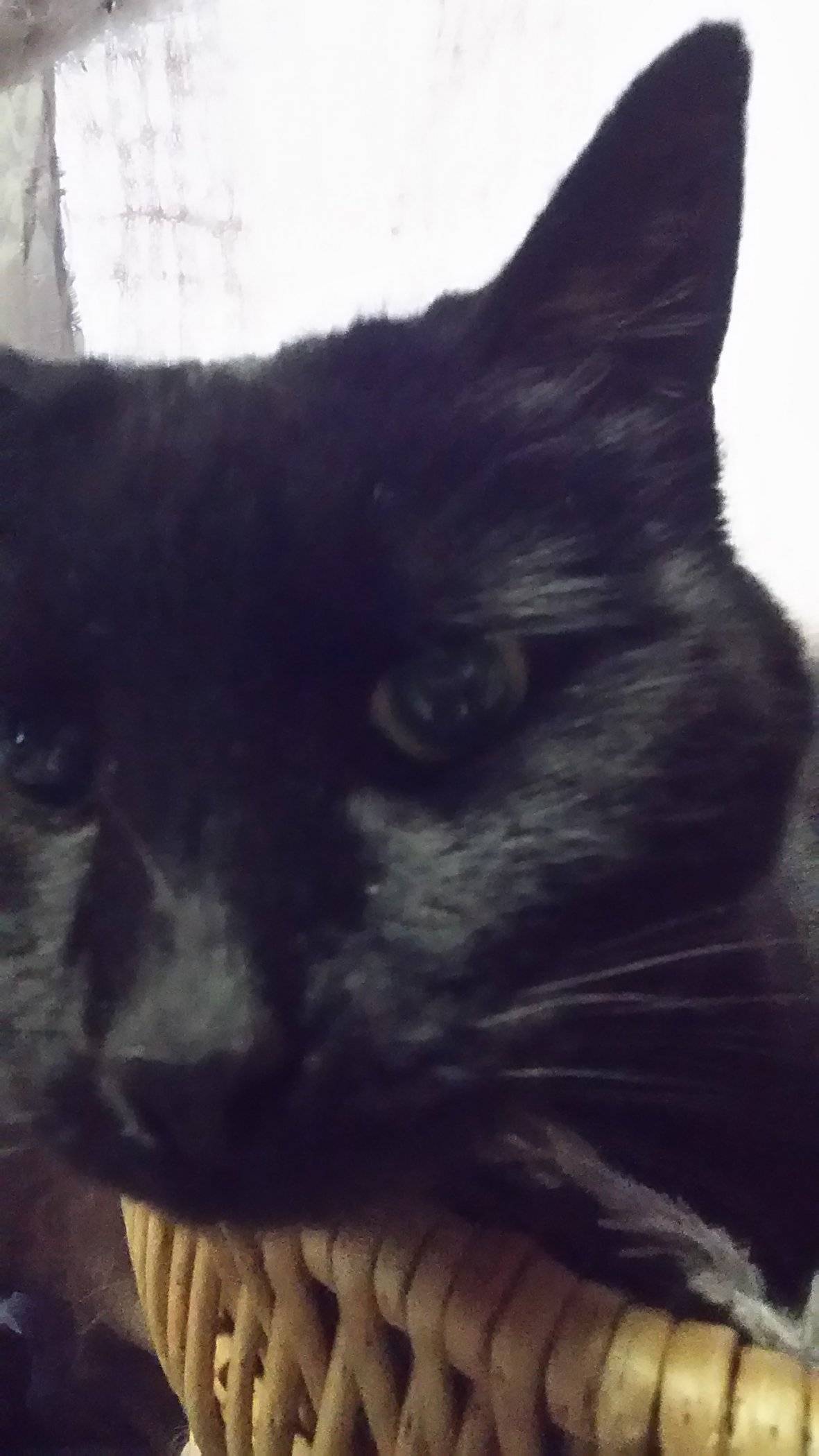 It wasn’t long before the mama and babies came out of hiding to inspect the yummy food.  It was the middle of winter with plenty of snow and cold that made me shiver, despite being bundled up.  I felt bad for the homeless cats with only their fur to keep them warm.

The first kitten didn’t hesitate, he went in the trap and began to eat.  He didn’t mind that the door closed, he was hungry.  The little gray tabby looked just like his mama and I guessed his age to be about 2 months old.  I waited until he finished eating to disturb him, then took the trap to the Meow Mobile (cat rescue van) and transferred him to a carrier with a warm bed.  I named him Stripes.

Next to go in the trap was a black kitten.  This one panicked when the door closed and wasn’t going to eat so I immediately got the trap and put the terrified kitten in a cozy carrier.  The others were staying away from the traps now, so this meant quitting time and I’d be back at 5am the next day to try again.

Settled in their room at the rescue, the little boy was mellow and curious while his sister hid in a box.  I named her Africa.

The next morning, a kitten was caught by 5:30.  I waited a few hours to catch the last one but no luck.  I named this one Rasta, also solid black.  She joined her sister hiding in the box.  They we’re nicknamed “the hissy twins” because anyone that went in the room were greeted with hissing and spitting. 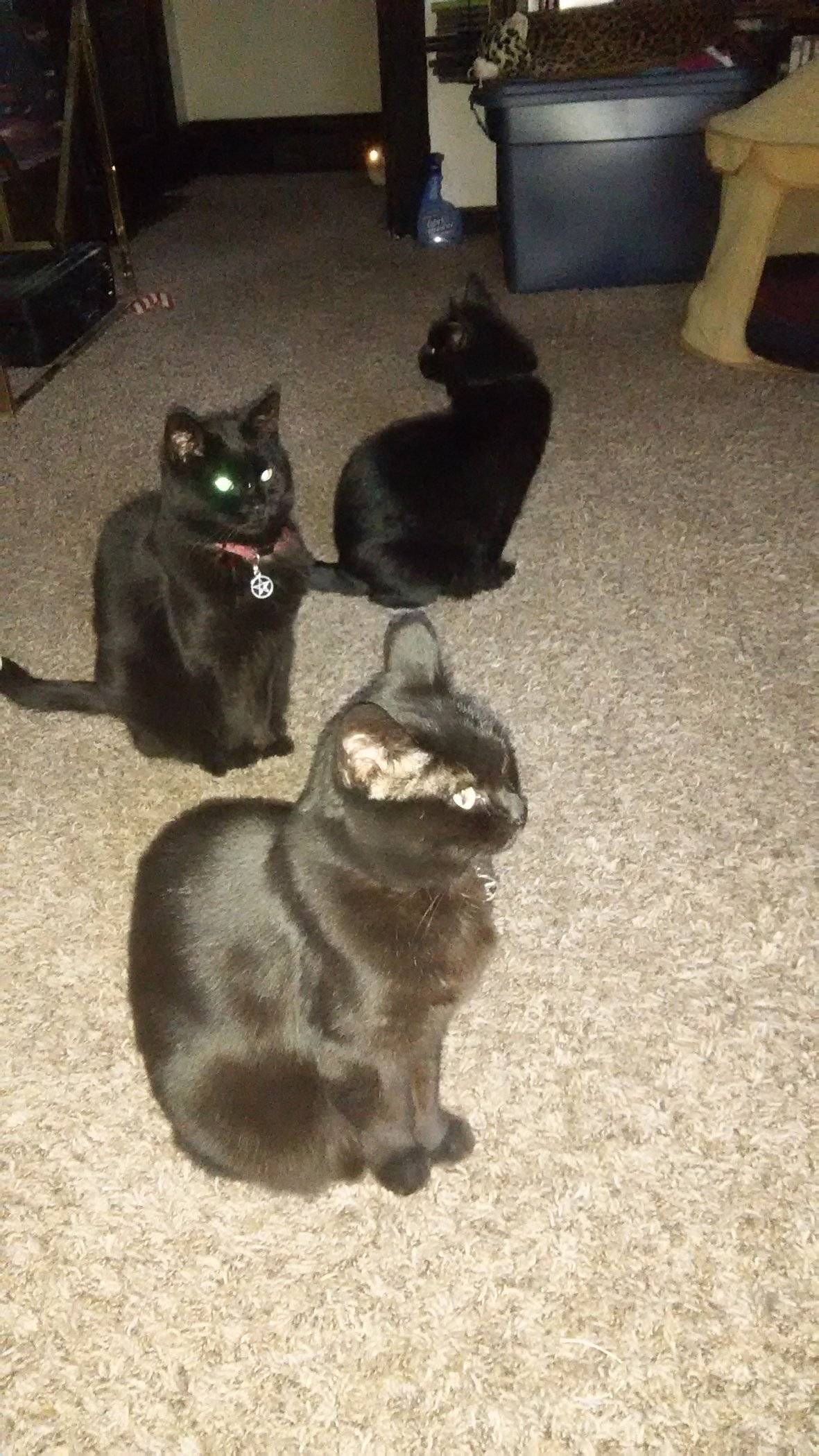 The next morning, I caught the last black kitten.  The little sweetheart was so vicious, it was hard to carry the trap by the handle, she could reach her skinny paw through the trap and scratch my fingers.  She was challenge to place in a carrier.  This one would be named Nubia.  Only the mama was left to catch.
While Nubia was getting settled, a knock on the window almost made me jump out of my seat and I found myself explaining to the police why there was “suspicious activity in the bushes”.  I told them I was trapping cats.  They didn’t believe me, had a bad attitude.  I showed them where the traps were set and showed them the carrier with Nubia inside.  One of them stuck his finger in and was greeted by claws!  It was hard not to laugh.  I told him he can’t pet the kitten until I tame it and explained how I trap them, get them spayed/neutered, vaccinated and adopted into living homes.  I invited the officers to the rescue where they could adopt one already waiting for a home.  The look on his face was priceless!  I was dismissed as a crazy lady and allowed to continue trapping.  The mama was trap-wise and would never go in.  Taming the babies was the next step!

I added Nubia to the room with her siblings, a sweet reunion!  She huddled with her sisters in the box.  All 3 were identical, solid black with green eyes.  Colored collars would be the only way to tell them apart.

Over the next couple of weeks, Stripes learned to be less fearful and chase toys while his sisters remained huddled in the box.  He was neutered and vaccinated.  He was the first to allow me to pet him.  He was also first to get adopted.

The sisters took longer to tame.  They cried if they were separated so we kept them together.  I camped in their room several nights and they started becoming curious about me.  It wasn’t long until I could pet them and hold them.

They were taken to every adoption event but they cowered in the corner and didn’t want attention from strangers.  All the others were getting adopted except the black ones.  People are superstitious about black cats..  Getting one adopted was difficult, we were hoping for a miracle- to place all 3 sisters together, since it upset them so much to be apart. 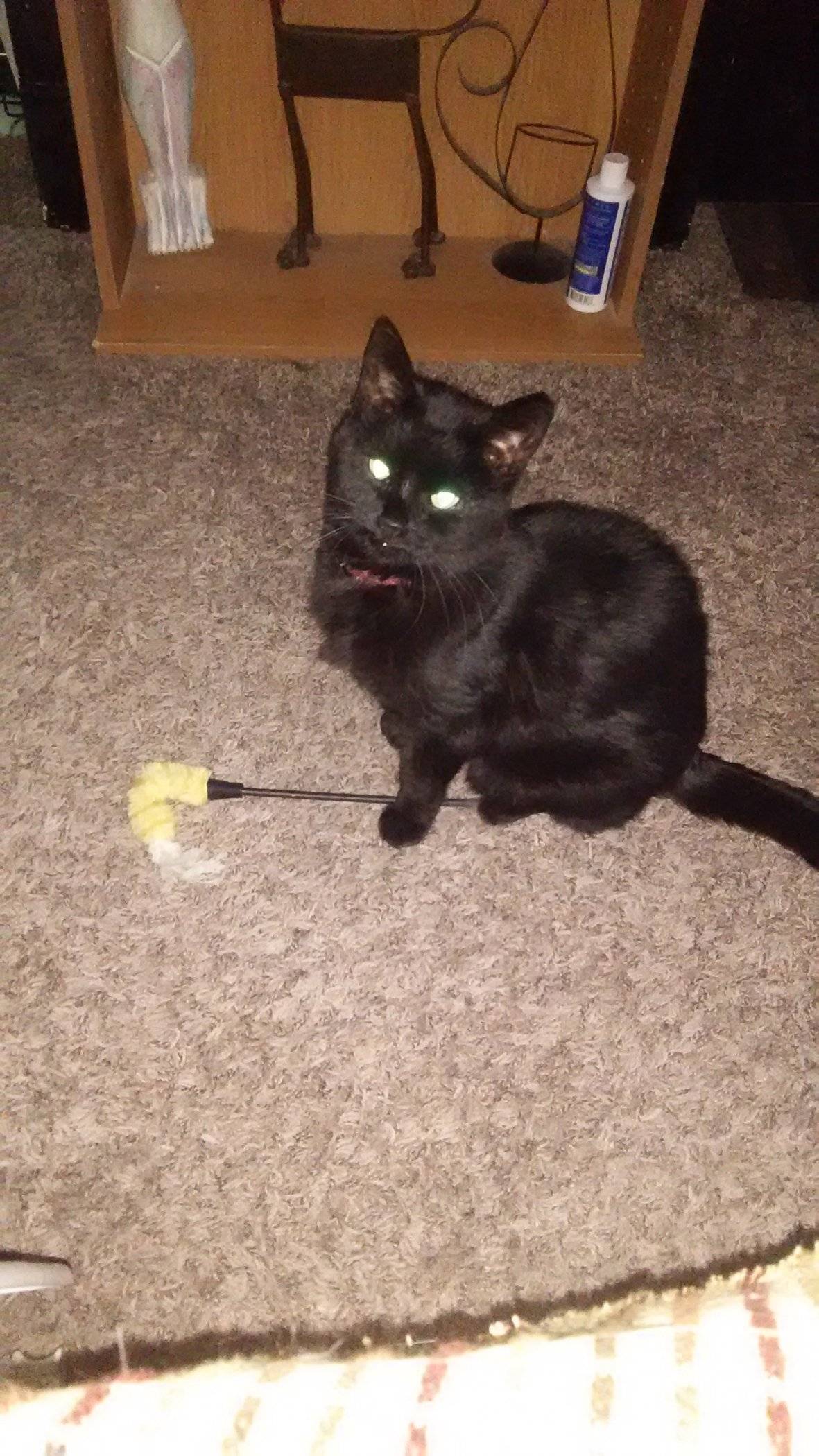 After weeks of showings, I decided to adopt Africa, Rasta and Nubia.  They were fearful of everyone but trusted me.  They were normal, playful and happy when no one else was around.  I spent many hours teaching them to trust people.  I had spent the most time with them, so they decided to bond with me.  My bond with them was also strong.  It was meant to be.  They held the record for the longest residents at the rescue and had been there 12 weeks.  Time to take them home!

They were interested in their new home, exploring everywhere.  Shy of my family at first, they soon warmed up.  They followed me around, slept in my bed, got along with my 4 old cats and blended in with my family so well.  They were purr-fect!

As they grew up, they still looked identical.  There was one small difference- Nubia’s ear wasn’t tipped when she was spayed because she was friendly enough she wasn’t labeled feral.

Although they looked the same, their personalities we’re very different, each one unique in their own way.  Rasta is bold, silly, demanding.  Nubia is very clingy and very affectionate.  Africa likes to hunt bugs, hates to be brushed and gets jealous when I pet anyone else.

All 3 like to pile up in my lap for a nap.  They purr until they drool.  They would steal something from my plate and share the prize.  They warn me of storms and visitors.

They play with toys and are fun to watch.. 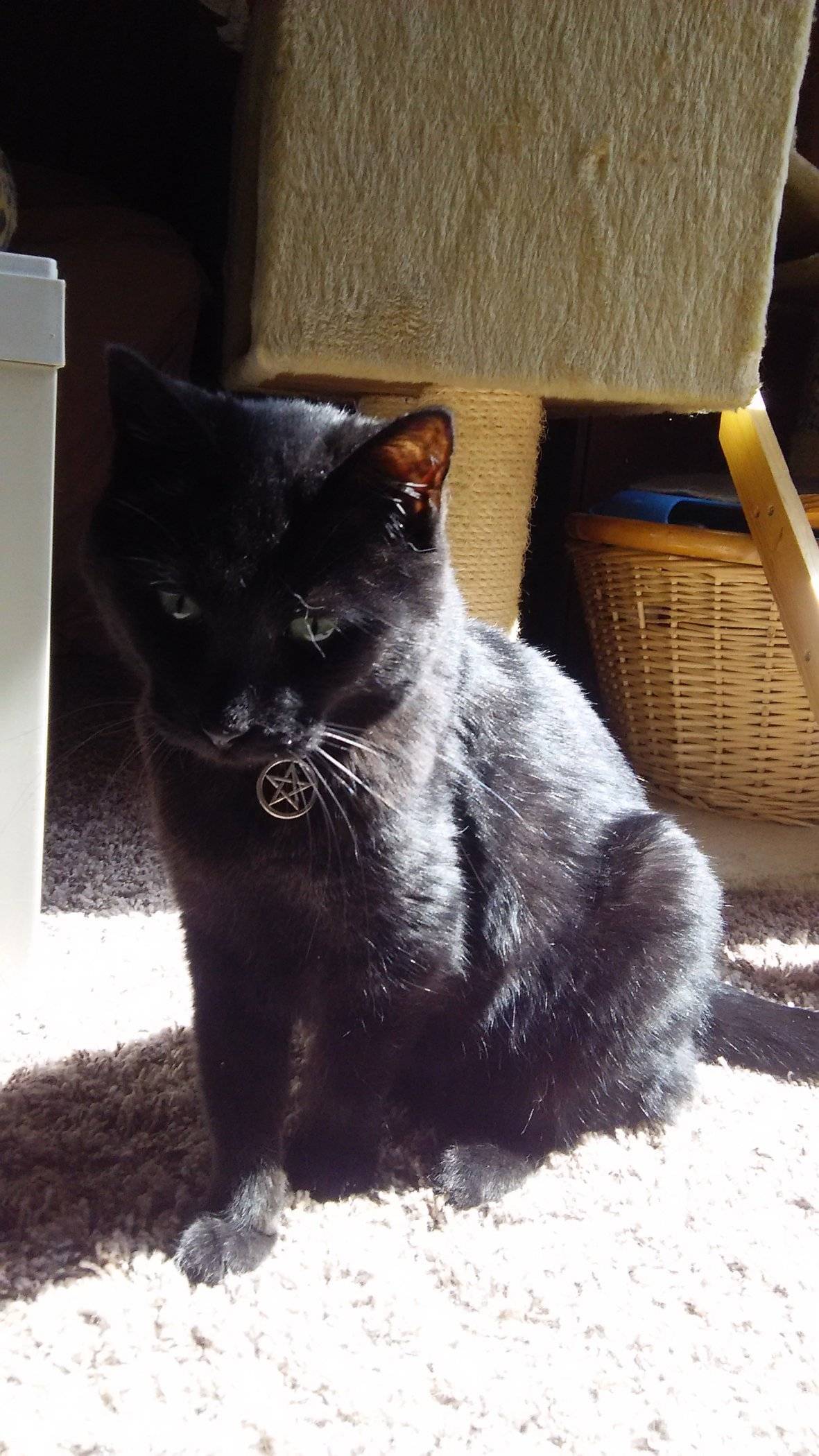 Now Nubia, Rasta and Africa are over 10 years old.  They have a few gray hairs and Rasta’s hips get sore when the weather gets cold.  They still play like kittens and act crazy daily.

I must say, being owned by 3 panthers is the most rewarding experience!  I would recommend it to anyone!

18 thoughts on “Guest Star: A fellow Nubia would like to say hello”