I’ve been so looking forward to this, as this is one of the most famous and revered cat artists!

Swiss-born, multifaceted Steinlen—at once illustrator, painter, printmaker, and sculptor—spent most of his life in Montmartre, the picturesque epicenter of many avant-garde movements.

His best-known work—the cabaret advertisement La Tournée du Chat Noir, the 1896 poster featuring a black cat silhouetted against a burnt orange background—is now an icon of the “poster craze” circa 1900, and you can see it everywhere in Paris!

Steinlen experimented with a range of styles, such as Realism, Japonisme, Art Nouveau, and Post-Impressionism, over the course of his career.  As an artist he was not merely a commercial success but showed great sensitivity toward social issues. Besides illustrating advertisements for a variety of products, Steinlen was famous for his posters of cabaret and music hall performers. He also contributed a large amount of drawings and lithographs to the radical press publications, Pere Peinard, Les Temps Nouveaux and La Chambard.

Steinlen’s lithographs were reproduced upon thin newsprint in the journal by photography and typography with added captions.  His images were critical of social contrasts, which he depicted with a sure handed simplicity, fine imagery and stylistic elegance.  His wonderful use of line and design led to some of the most famous posters of his era.  Known as “the Millet of the Streets”, his influence was vast: among other artists both Toulouse-Lautrec and the young Picasso paid direct homage to his art.

Luckily for those in Richmond, Virginia, USA:  the Virginia Museum of Fine Arts (VMFA) museum is having an exhibition on him and his cats until May 13th 2018.

I was moved by Steinlen’s “Lait pur” poster to create a sketch with my three cats and my favourite drink in it ! 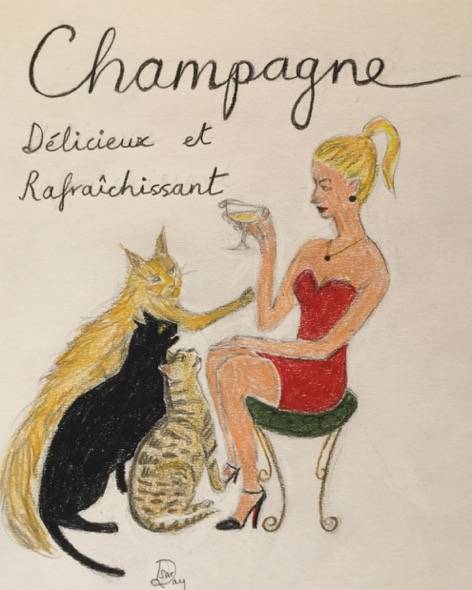