Two amazing cat mums discovered the power of teamwork recently when they raised their litters of kittens together. 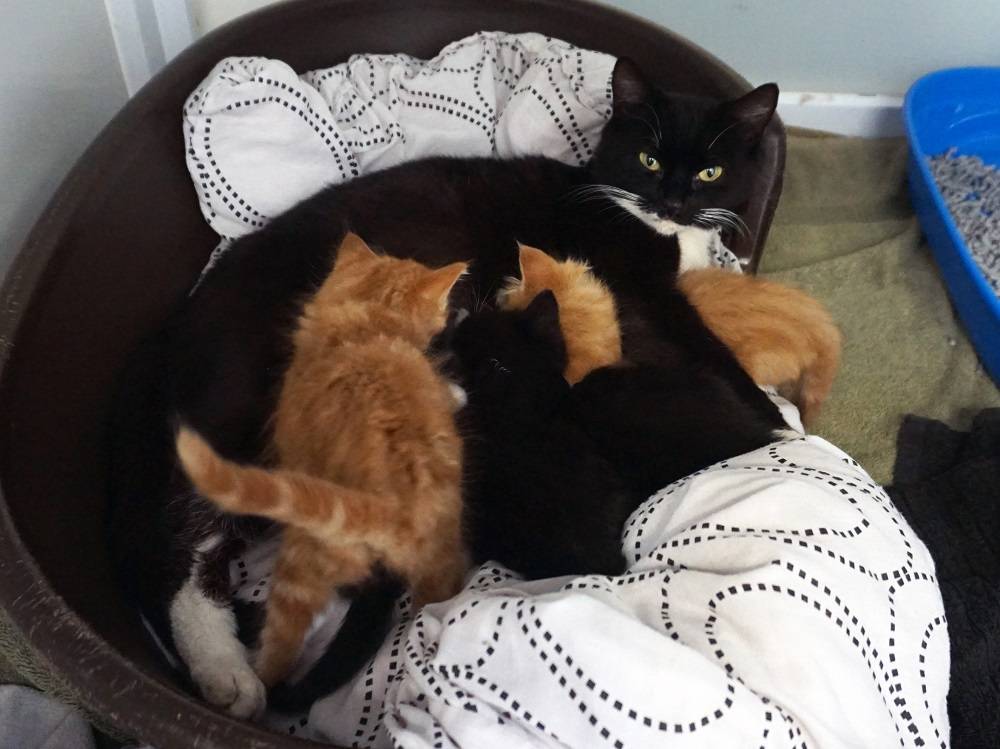 Mayhew Animal Welfare Officer, AJ Ford, said: “As soon as we received the call from the garage, we went over to check on the mums and kittens. The eight kittens appeared to have been born on the same day to the two mums and were all cuddled up together at the garage.” 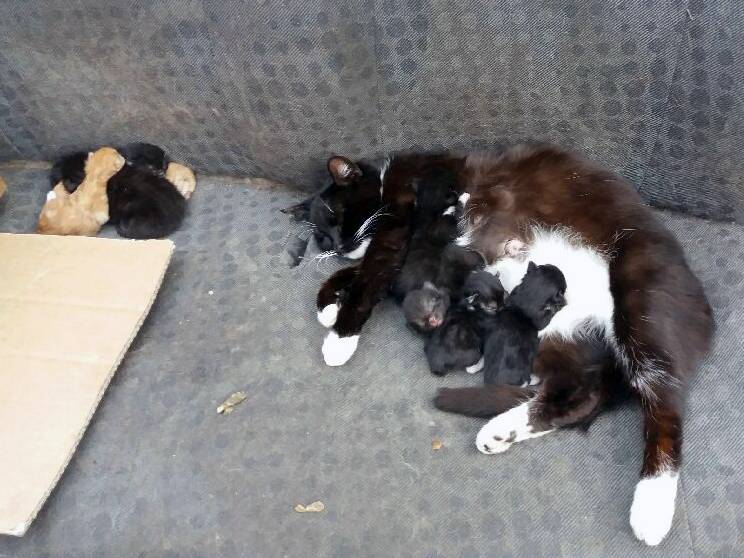 “The two mums, one domestic and one feral, were sharing the feeding responsibilities and it was impossible to tell which kittens belonged to which mum. The mums were very loving towards each other, they were nursing the kittens interchangeably and when one mum needed a break, the other was able to step in.”

“As the mums were coping so well together, we temporarily left them in the safe hands of the garage employees, who had created a safe place for the mothers to raise their kittens together. They had provided plenty of food, water and shelter for the mums and kittens, and had left three large padded seats down for them to live on. We also gave the employees lots of advice on how to care for the mums and kittens and stayed in regular contact with them during the period when they were at the garage.” 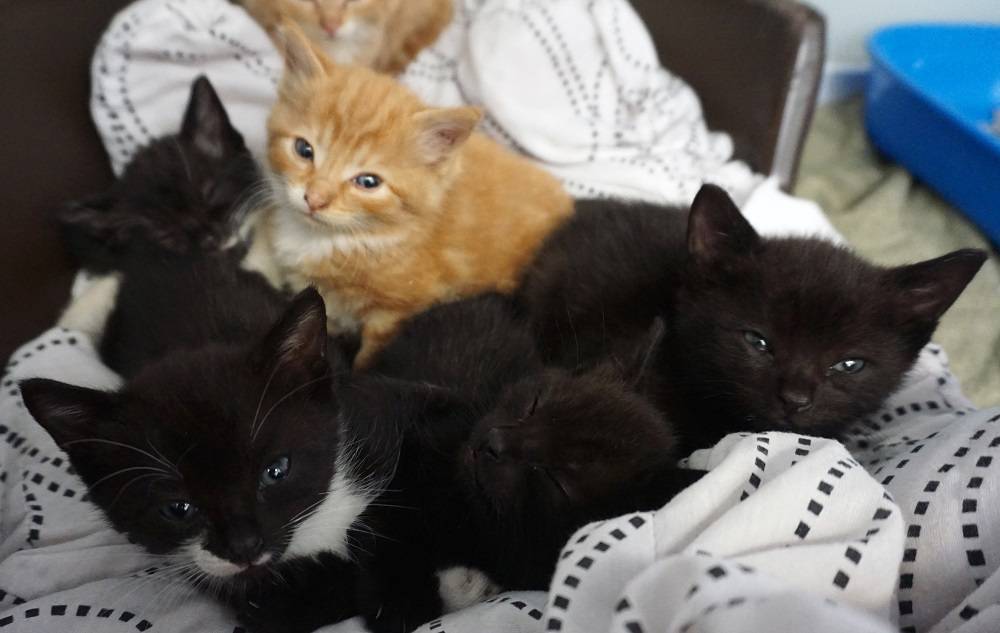 Once the kittens had reached five-weeks-old and were old enough to eat solid food, Mayhew’s Animal Welfare Officers returned to the garage to bring the two mums and eight kittens back to the Home.

The feral mum was neutered and health checked by Mayhew’s Vet Team, and returned back to the garage as a part of Mayhew’s Trap, Neuter and Return Programme, launched by the charity in 1996 to help control and contain the feral cat population in London. As the garage employees had become so attached to the two families, they were happy to continue looking out for the feral mum. 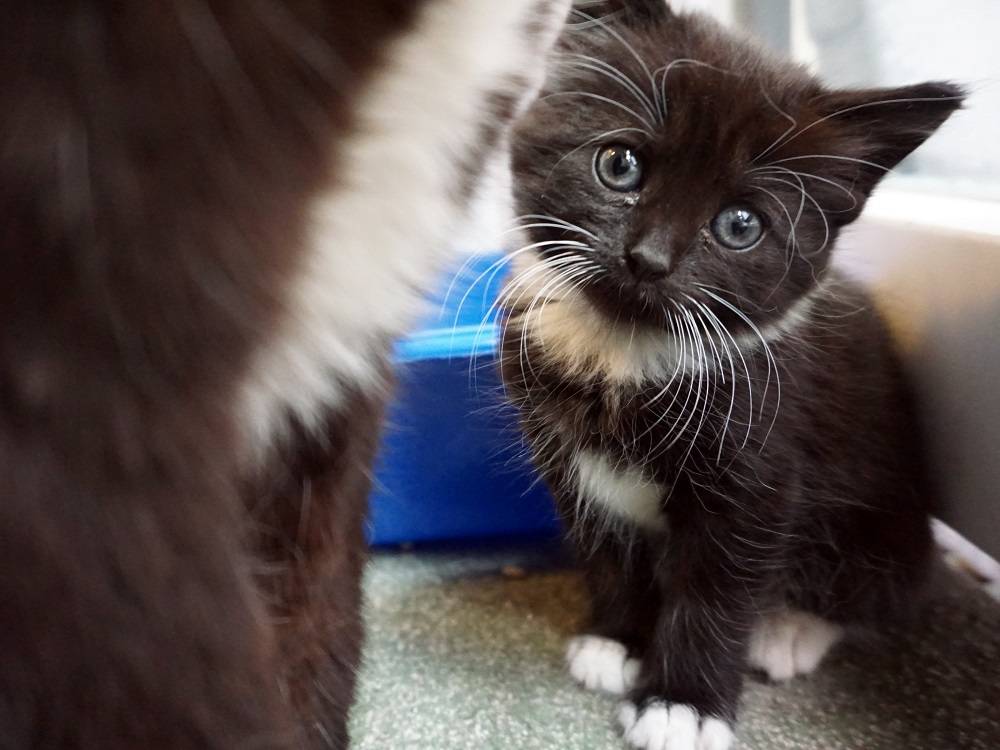 The domestic mum and eight kittens were settled into a comfy and warm cat cabin by Mayhew cattery staff and were given a thorough health check by the Vet Team. Thankfully mum and kittens were all in good condition and were healthy weights, proving that feline teamwork certainly makes the dream work!

As the mum and kittens were such a big family, Mayhew staff aptly named them after the characters in the popular TV cartoon show, Family Guy. The mum was named Lois and the kittens were named Peter, Meg, Chris, Stewie, Brian, Jo, Cleveland and Quagmire. 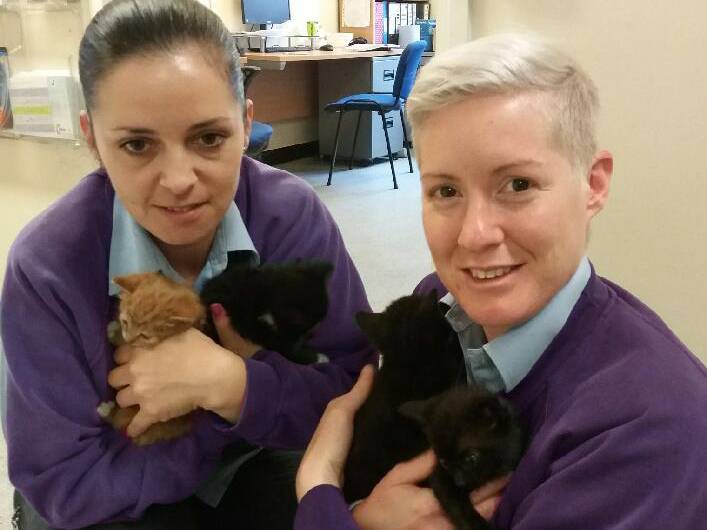 AJ, said: “Once the kittens were old enough to be eating solid food, we brought the mum and kittens in. All of the babies appeared to be in great condition – the two mums had certainly done a good job together.”

“This story highlights how important it is to get your pet neutered. We see hundreds of unwanted kittens coming into our Home all year round like the Family Guy kittens and it’s a growing problem. We encourage pet owners to get their animals neutered, and offer low cost and affordable neutering for cats and dogs at our Vet Clinic, and are part of the C4 Scheme to tackle the overpopulation of cats in London. We also run a Pick and Snip project, which offers free neutering for cats and kittens for some owners who may be eligible, pending circumstances.”

Once the kittens are old enough to leave their mum and have all been neutered and vaccinated, they’ll be ready to start their next adventure with a loving forever family. 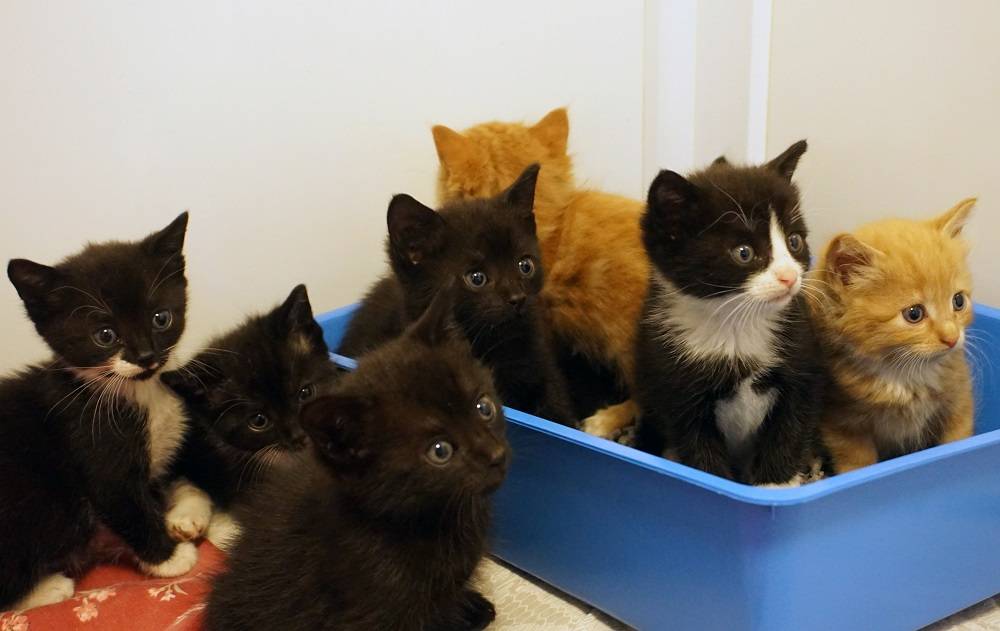 It’s kitten season at Mayhew and it’s quite literally raining cats and kittens. They urgently need more kitten food to feed the influx of furry felines that have arrived recently. Mayhew’s Animal Welfare Officers are bringing in more and more kittens every day, so please consider helping by either buying some wet kitten food from their Amazon Wishlist – www.amazon.co.uk/registry/wishlist/HM48FAT7VDW2 – or donate and drop off any that you have spare. Anything that you could donate will help them continue to care for and feed the overflow of kittens throughout kitten season.