As someone actively involved in rescue I often come across animals in need and am sought out to handle animals others have found. Dogs, cats, puppies, kittens, horses, and mice have all found their way to my place. I generally adopt out as many as possible, keeping only those I’m unsure will find homes or be adoptable.

One of the last kittens I fostered stayed because he has a rare genetic condition called Congenital Hypothyroidism (it’s actually fairly common in humans and puppies, but kittens rarely live long enough to be diagnosed and are often misdiagnosed). Most veterinarians will go their entire career without seeing a case. All that to say of course a congenital hypothyroidism kitten would come my way. Meet Wee Baby Seamus! 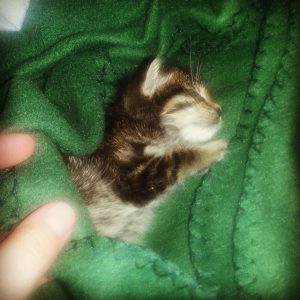 He appeared to be a normal, if very weak, 4-week old kitten. The previous owner had waited at least 2 days (during which she had not been able to get him to eat or drink anything) to let me know he was not well. I assumed he was a runt that had not been cared for properly and after rushing the completely unresponsive little guy to a vet, we went home with subcutaneous fluids and vitamin supplements after a mad scramble by the vet to bring him around. The veterinarian, the animal rescue I work with (Southern Cross Animal Rescue – SCAR), and I all assumed he would be ready for life as a kitten in the rescue’s cat facilities in a few weeks. 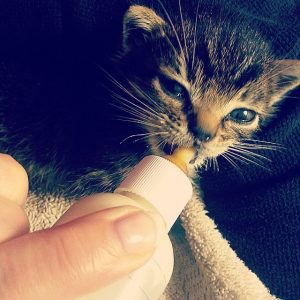 Wee Baby Seamus (AKA: WBS, Weebs, Weebles, etc) was able to go to work with me and due to his precarious state, I fed him every 1-2 hours rather than the 3-5 I generally use with 4-week old kittens.  Having gone through such a long period without food or water I was not surprised that my new little friend was sluggish and slept the majority of the time.  In the next couple days a follow-up exam by the veterinarian was positive, he seemed to have pulled through and no longer needed subcutaneous fluids. We all anticipated a normal recovery.

After a week I started to have doubts. Despite constant nourishment, WBS was not very active. Even though he should have been about 5 weeks old (and kittens that young can vary a little, especially after such a rough start), he still seemed to need to feed every 1-2 hours. He was starting to try and crawl a bit but his joints seemed strange. His legs seemed to sink down behind his feet rather than sit on top of them as a normal cats joints align. He wanted to play but his little legs chased my fingers in slow motion. He spent the vast majority of his time eating or asleep, sometimes falling asleep mid meals. I wondered if the lack of sleep was making me a bit paranoid and the veterinarian thought he was probably a munchkin cat of some sort. His short little legs and pot belly made that feasible. 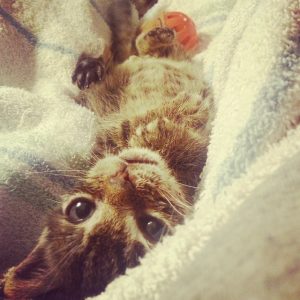 Weeks later WBS was finally able to eat wet food mixed with formula (as he should have been able to do much sooner). He even ate strangely, he would take huge mouthfuls, let most dribble out of his mouth as he tilted his head to the side and ground down with one side of his molars. I noticed his claws hadn’t grown out from the first trimming on the night I’d gotten him. The hair above his little nose was starting to look thin. His coat was rough and thin. I felt he did not look good and I knew he was not developing normally. He was so ridiculously adorable, but I was getting extremely nervous. 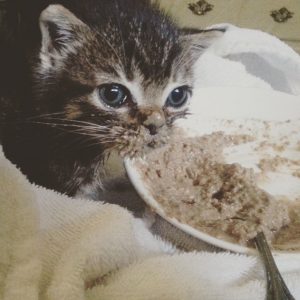 Luckily I had worked at a vet school and was active with a rescue run through the school and still had friends who worked/volunteered there. A wonderful vet tech who has a huge heart for cats watched Weeble on Facebook (he has his own facebook page and I regularly uploaded videos/pictures) and sent me a message to tell me she thought he had a congenital defect. I took WBS to the vet school (3 hours each way) and her initial diagnosis was confirmed. None of the veterinarians there had ever had a congenital hypothyroid kitten case. Weebs was “borrowed” by the vet school for hours as they ran tests and most of the internal medicine (or cat crazy folks) checked him out. Weebs had become a minor celebrity back home (people would come into the store where I was working and demand kitten time) and he received the same treatment at the clinic of the vet school. After the diagnosis, he was put on a thyroid hormone supplement twice a day, and the cat trapped in the kitten started to emerge! Below you can see the little Ewok start to look more like a kitten. 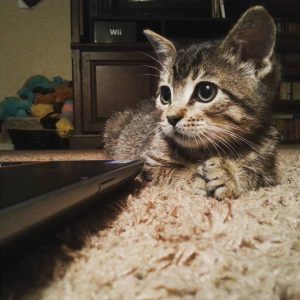 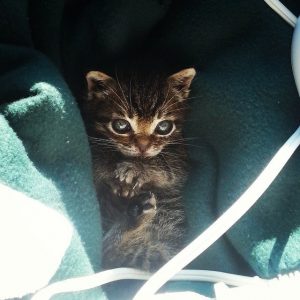 Once his body started receiving the hormones it had desperately needed he matured incredibly fast. He started moving at a more normal rate (zoomies down the hallway were his favorite when he first figured out he could run), his joints solidified and he was able to walk/run normally (although he does have a gunslinger gait), and he was able to transition to strictly solid foods. Unfortunately, the diagnosis and medicine were too late to prevent being mentally stunted. Weebs is extremely unique, he responds to stimuli slowly if at all. Until you know what to watch for he seems to be deaf. He has OCD tendencies and a few strange neurologic symptoms.

However, despite all of that, Weebles is always happy. He’s filled with wonder, everything is always new and exciting. The slightly crazed (or high) expressions below are the way he watches everything. Someone walking across the room is fascinating and fun. Going up and down stairs is one of the best parts of his day even though he does it multiple times every single day. 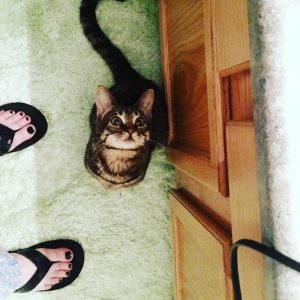 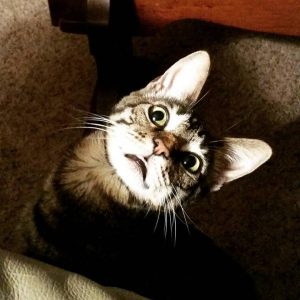 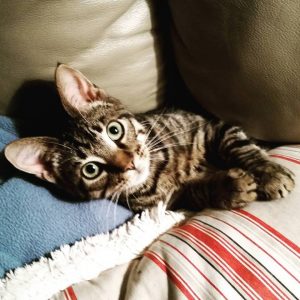 <- He got sucked into the couch and couldn’t figure out what to do about it. So he just stayed there until I finished taking pictures and laughing.

I never adopted WBS out because I was scared that his new owners would not be compliant with his medication and he must have that medication to survive. He requires blood tests and veterinarian visits to make sure his dosage is correct. He can never go outside. We are currently in the middle of an adventure to get him integrated with the rest of the animals in the house. It’s a constant adventure and is very often frustrating, but he is the most fun. Everyone loves him (well…except for the other animals at this point) and he keeps us laughing. He’s a great example for the kids (and adults who have perhaps forgotten) that different doesn’t mean less. 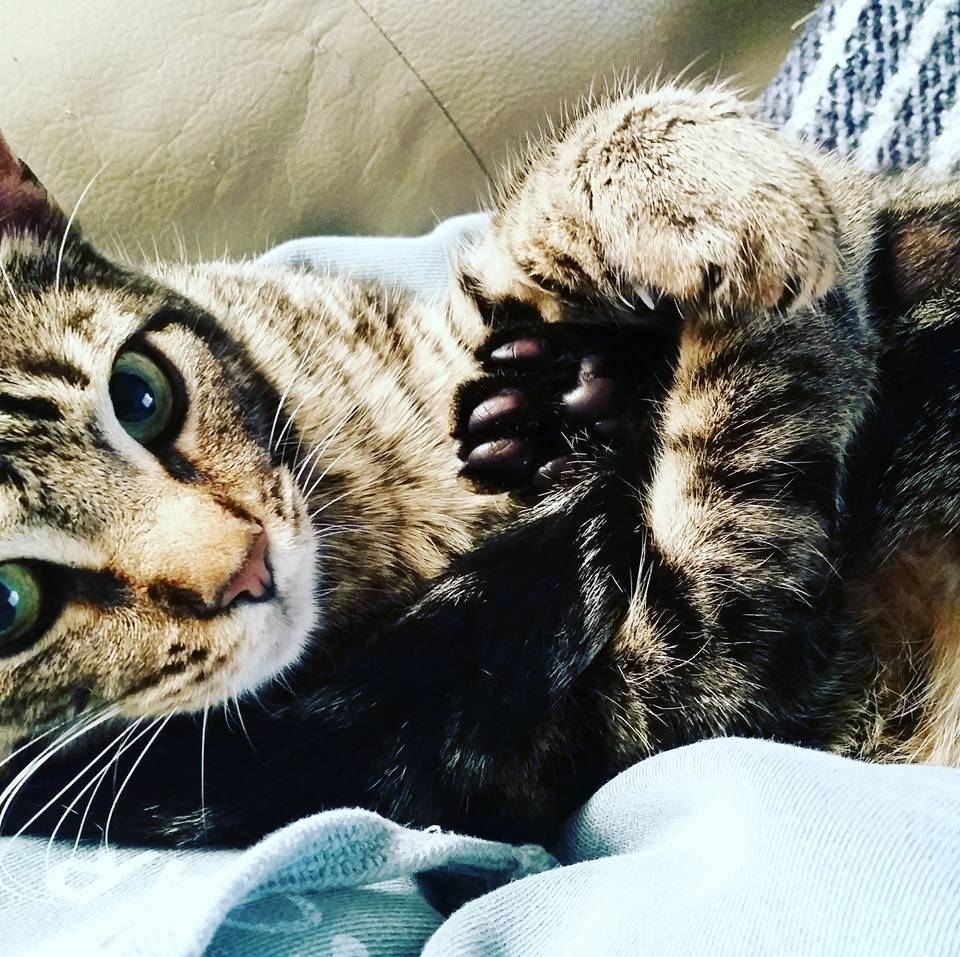