Today we have another heart breaking story from the Mayhew Animal Home which luckily did have a happy ending!

Young Cat Dumped Outside Homebase Starving and Covered in Oil

A terrified and emaciated cat, who was dumped in the rain outside Homebase, has finally found happiness thanks to The Mayhew Animal Home. 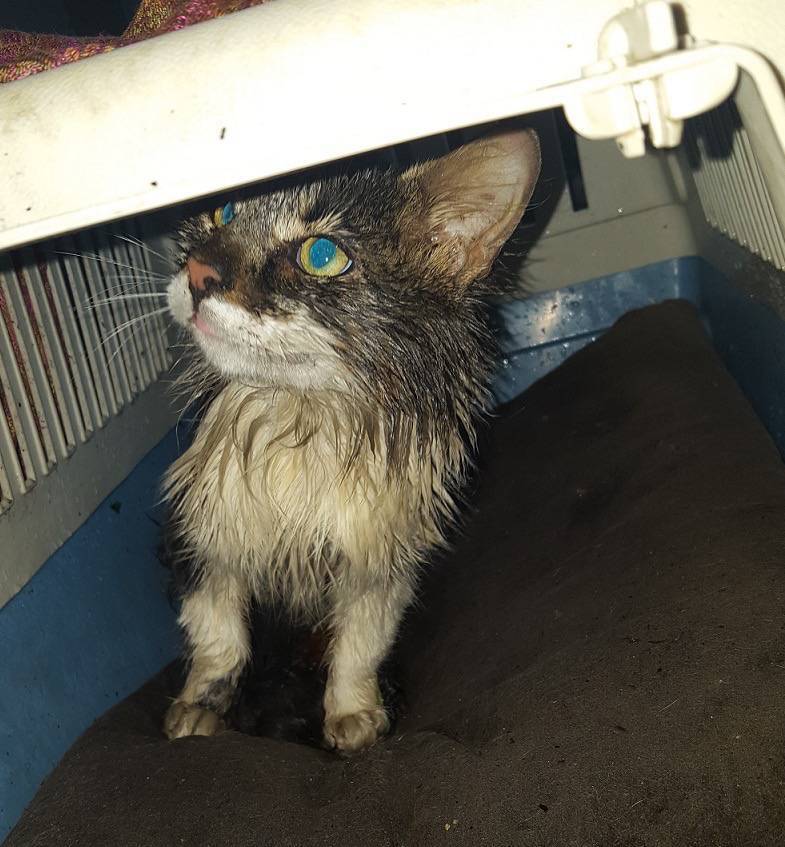 The 13-month-old tabby and white cat, named Kimmie by Mayhew staff, was discovered in a wire top cat carrier by a member of the public in Homebase’s car park in East Acton.

At the time it had been raining heavily, so the local shopper immediately brought the poor tabby into The Mayhew. On arrival, Kimmie was soaking wet, extremely underweight, and looked like she had been lying in engine oil. 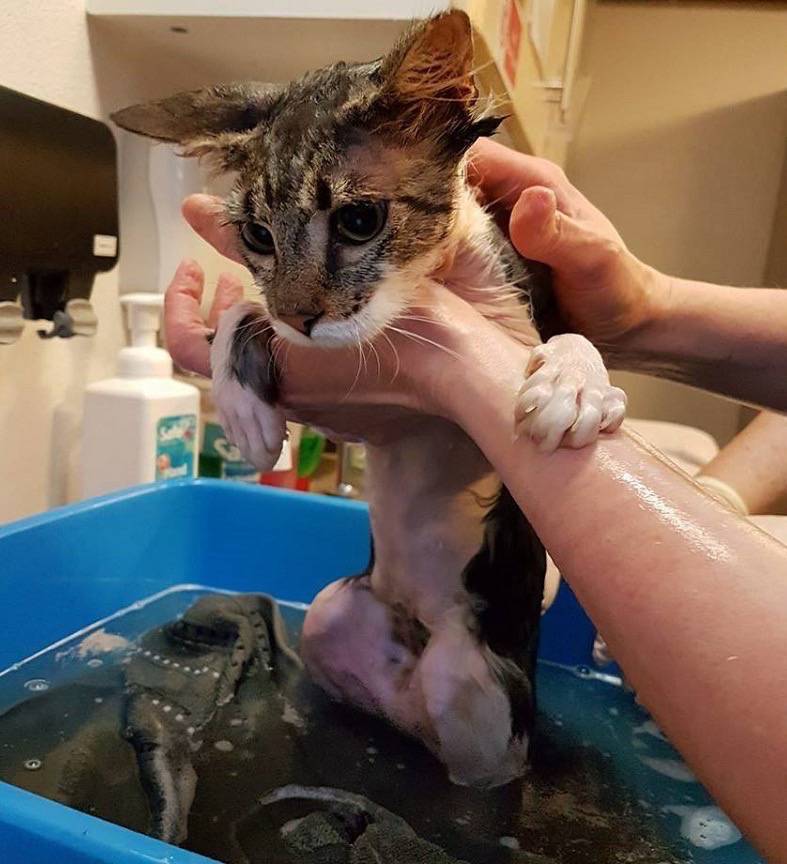 The Mayhew’s Animal Welfare Officer, Tania Mazzoni, said: “We can’t say how long Kimmie had been outside in her cat carrier for, but she was wet, freezing cold, and very skinny.”

“Where pet owners are having difficulty, we urge them to contact us first and we will see what we can do to help. If owners called us in the first instance, we can help in many other ways rather than the last resort of them dumping their pet.”

“As Animal Welfare Officers, our job is to help pets and advise their owners on the best course of action. We are here to help the animal and prevent suffering, no matter what the problem is, we do not judge anyone.”

Seeing that she needed urgent care, our Vet Team got straight to work with checking Kimmie over and making sure she was comfortable.

Our Head Vet, Dr. Ursula Goetz MRCVS, GP Cert (SAS) CVO, said: “Poor Kimmie was in a bad way – it looked like she had been lying in engine oil, she was unsteady on her feet, and very underweight. Her whole body was also twitching, which we thought might have been caused by the intoxication of the oil when she tried to lick herself clean.” 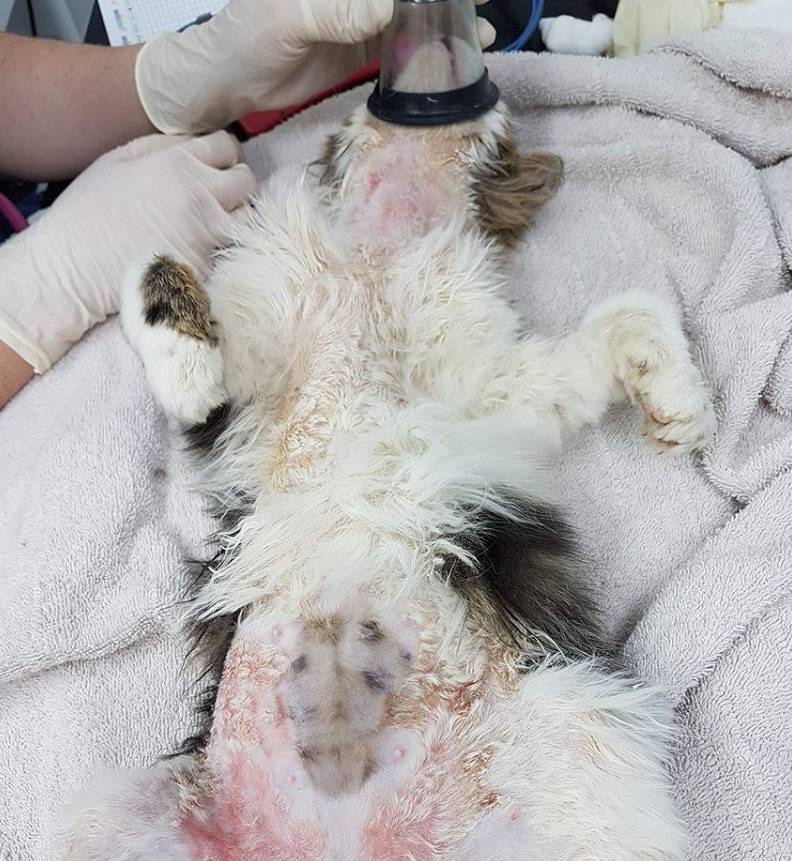 “The oil covered most of her stomach to the extent that she could not move her hind legs freely as it was sticking so tightly to the wounds caused by the oil on her tummy. She had to be sedated, so we could clip and clean her carefully. We delicately eased the sticky fur out of her wounds, freeing her hind legs, so she was able to move and stand again.”

“The skin underneath her stomach was covered in red raw wounds, so we put her on pain relief before she woke up again to ensure she was comfortable while she recovered.” 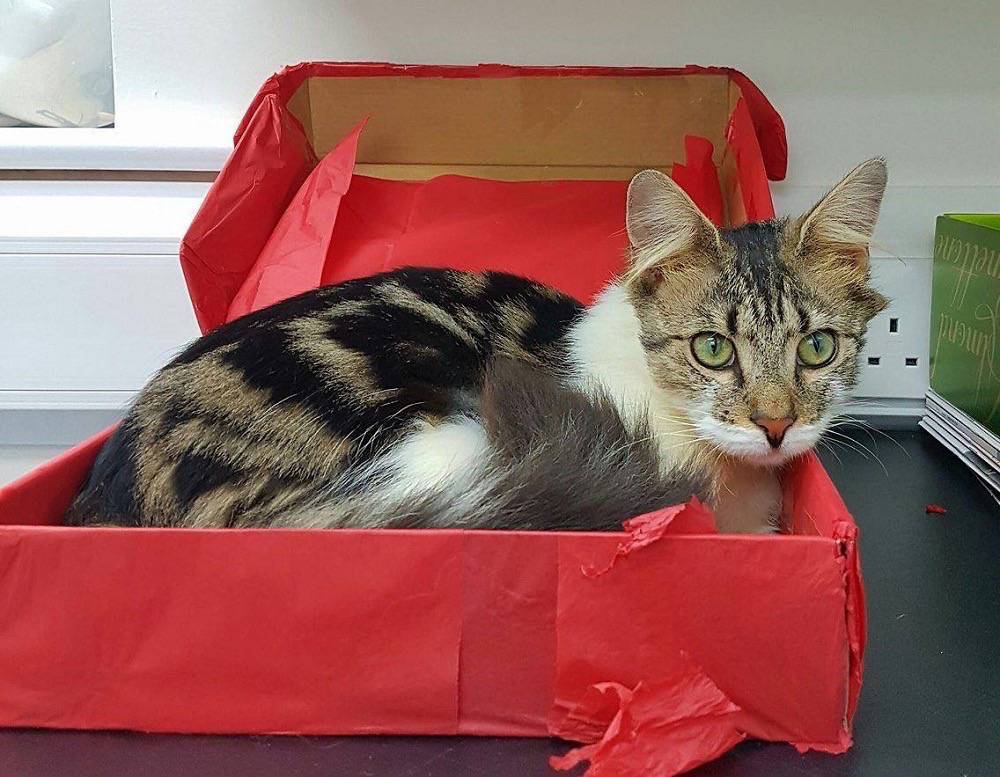 “After she was fully bathed and cleaned, we took blood and urine tests and gave her fluids. During the thorough health check, we discovered that Kimmie had also developed ulcers in her mouth, most likely caused from the oil she had been cleaning off herself. She was on several different treatments, but it was a joy to see her become cheekier and more confident day by day. Kimmie is such a sweet and affectionate character; she was forever making us laugh with her playful personality.”

“We also continued to bathe and clean her wounds to make sure the skin underneath her stomach healed properly. It took over a month for her to fully recover.” 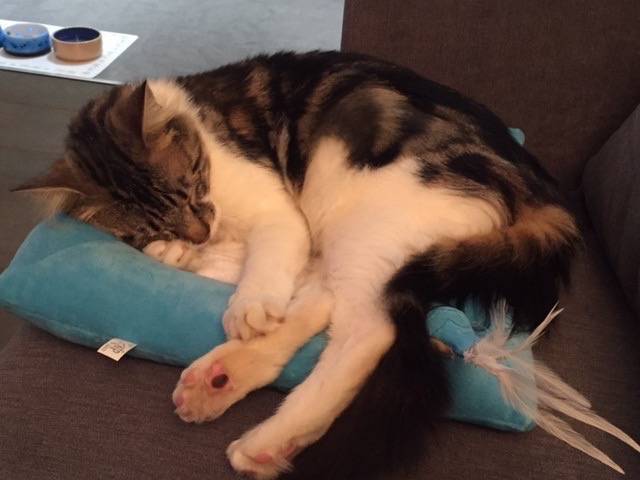 After receiving medical attention from our Vet Team, including vaccinations and flea and worming treatments, our Cattery team then settled Kimmie into warm and cosy cabin and gave her food and water to help her get her strength back up.

As soon as she was neutered and our Vet Team was satisfied she was in good health, our Cat Adoption Team soon found Kimmie the purrfect home.

She has since been renamed Pepsi and is enjoying her new life in her loving home.

Her new owner, Sam, said: “I adopted Kimmie, now called Pepsi, from the fabulous Mayhew Animal Home. She loves her new home, has settled in very well and follows me around everywhere. She also loves watching the TV and chasing shadows.”

Every year our Animal Welfare Officers and Community Vet Clinic respond to hundreds of animals in need and provide ongoing support to carers and pet owners in difficult situations, please consider a donation to help them rescue and help more animals like Kimmie. You can make an instant donation by texting “CATS27 £5” or your chosen amount (up to £10), or by donating on our website https://www.themayhew.org/donate/