by climate change and wildlife programmes 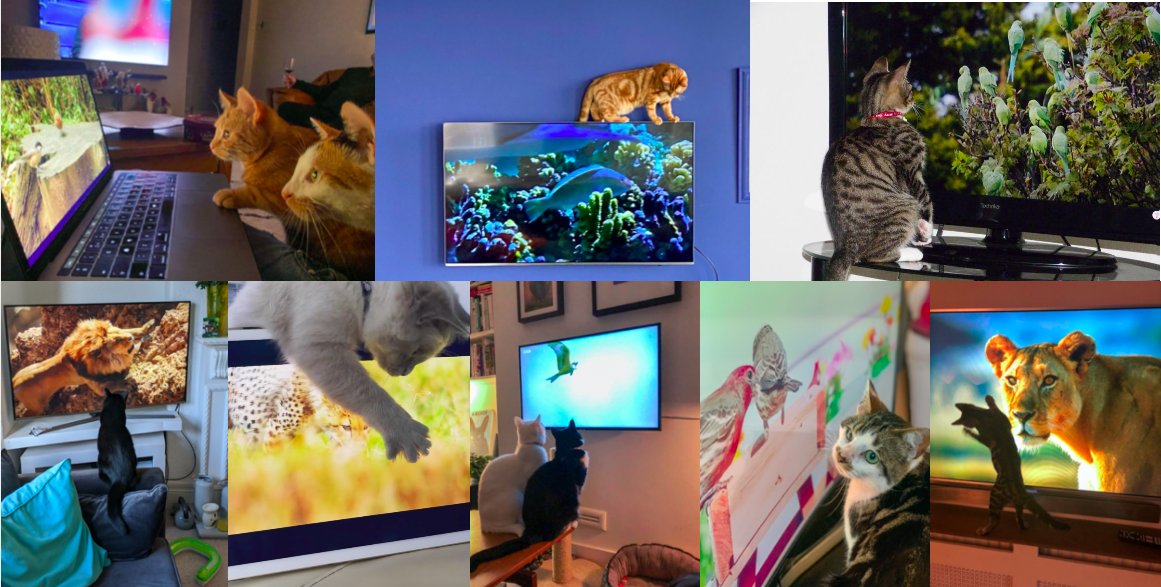 LONDON: Millions have been gripped by boxsets and have devoured documentaries over the past year. And it turns out, humans weren’t alone. While viewers settled down to watch, our beloved four-legged friends were equally enamoured.

With eyes glued to the likes of Our Planet, Seaspiracy and Springwatch, to The Game Changers and Greta Thunberg, over 500 cat lovers from across the country have submitted snaps of their engrossed eco warriors entranced in environmental and nature programmes

The hiss-terical pictures were compiled by sustainable cat litter brand Natusan, as part of a competition to find the country’s most eco-minded moggies captivated by programmes around protecting the planet and curbing climate change.

Rachel Andre, Director of sustainable cat litter firm, Natusan said “After a tumultuous year of feeling helpless, many of us have turned to our televisions, not only for entertainment, but also inspiration – looking for ways we can make a difference in the world and play our part to improve our environmental footprint.

“With sustainability at the heart of Natusan, we wanted to find fervent felines who are as passionate about the planet as we are.”

“Cats are highly visual creatures that love visual stimulation – so it’s no wonder our cats are captivated by television programmes which show the natural world.”

Victoria Winchester, 37, from Swansea, says her five-month-old kitten Delilah loves to playfully paw at the big cats on screen whilst watching David Attenborough’s documentary The Year Earth Changed – going as far to knock the iPad over! 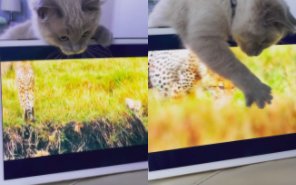 Joe Tipton, 32, also has another David ‘Cat’tenborough’ feline fan, and admits he is too scared to check the television for scratches, as his one-year-old moggie, Ziggy gets so excited watching Our Planet – and also insists on watching from on top of the television.

Kiki Tsoulouhopoulos, from Cheshire, says her cats Esme and Ziggy are engrossed when watching wildlife programmes – so much so that nothing can distract them! 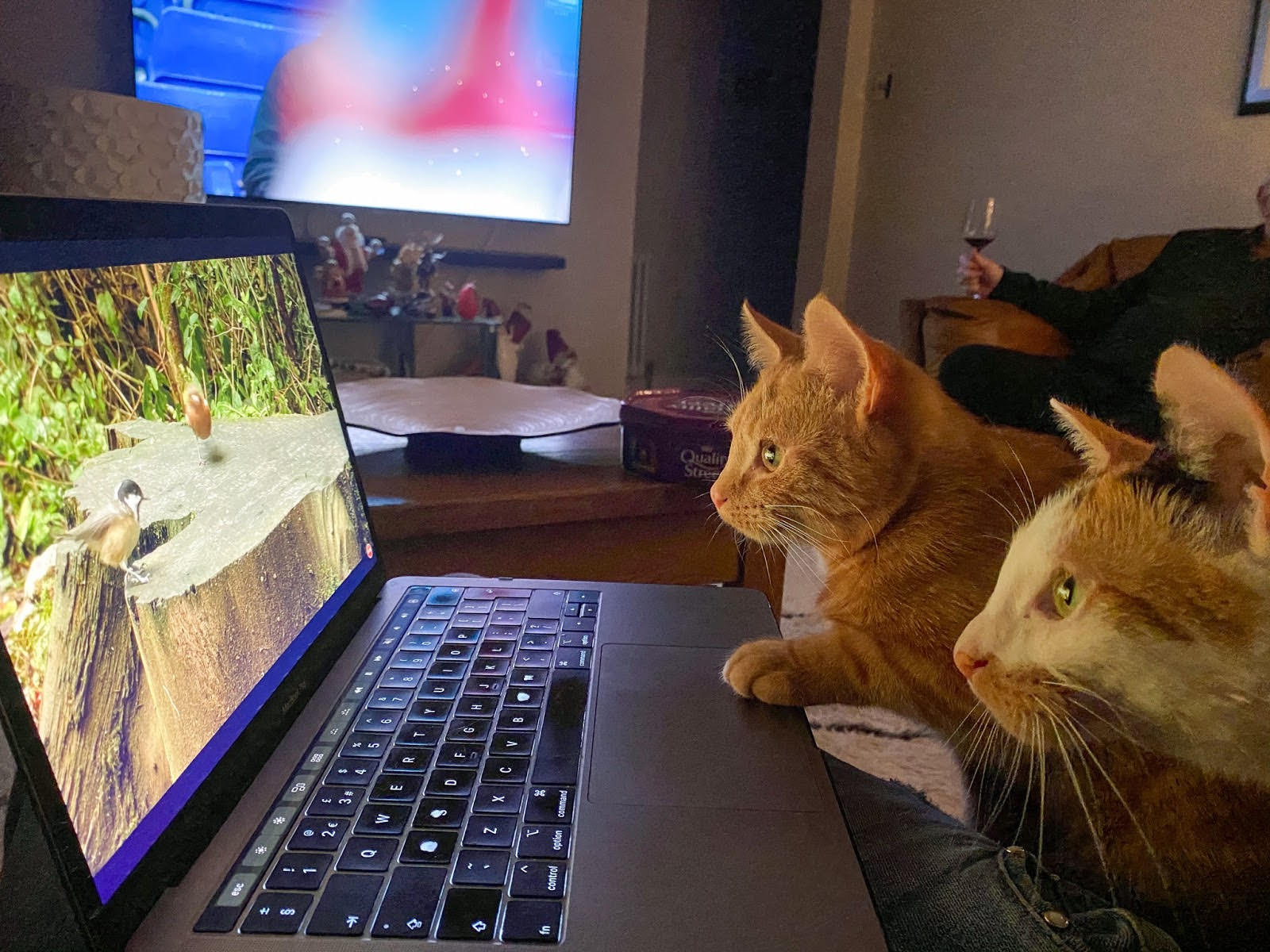 Ramona and Beezus, the domestic shorthair cats, give their undivided attention to the television when watching Dancing With Birds, says Cathryn Harvey, 25. They are also devoted to the David Attenborough series, Planet Earth.

Olly, the domestic shorthair cat from Cardiff, spends his days ‘chattering’ peacefully to parakeets which he watches on the television, says Fran Parsons, 68. Mesmerised by the movement of the birds and their song, Olly often gently paws at the screen too.

Not only is The Lion King a favourite film with us humans – but it turns out that our feline friends are also fond of the Disney classic too – finding the big cats captivating. Kelly Flood, 43, from Whitley Bay, says her black tabby cat Midnight is so engrossed by Mufasa that he often falls off the sofa when watching.

Sophie Pout from Pound Hill, West Sussex, says her British shorthair Indi is also a big fan of The Lion King – and that she loves not only the lions, but the meerkat too. Engrossed Indi tries to catch the big cats on the screen and has even crawled up the television before in a bid to do so.

Pauline Brown has a house full of felines in Thirsk – with her cats Monica, Phoebe, Mitzi and Lizzy all playing nature-inspired cat games on the television – which results in them scratching up the screen! 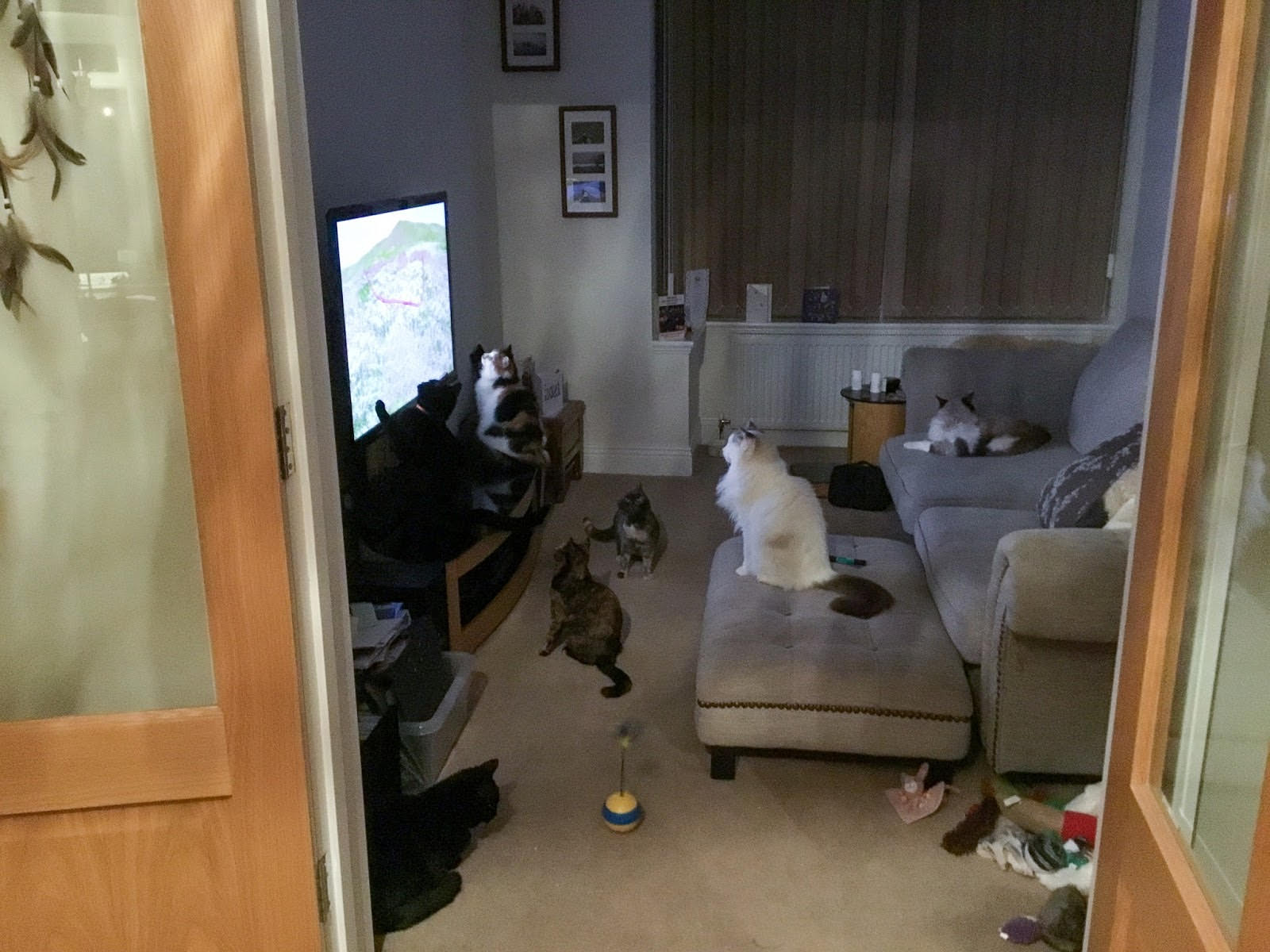 Denise Laurent from London says her oriental spotted tabby, Slinky, loves watching nature programmes – particularly Chris Packham – and will often watch whilst sat bolt upright, directly in front of the screen – blocking everyone else’s view! Denise even had to move the television to stop Slinky from knocking it over.

Tiffiney Kent, 47, said her two-year-old tabby cat, Toblerone, is fascinated when faced with David Attenborough – and can’t quite believe not being able to catch what’s on screen! What’s more, Toblerone is known to accidentally knock the remote off when watching.

Birmingham based student, Eleanor Page, said her cat Peach loves watching birds on the television and gets so animated when watching that she will paw and scratch at the screen. Also, as an indoor cat, Peach struggles to tell the difference between the birds outside flying in the sky and the ones she watches on the TV. All very exciting in Peach’s eyes!

British shorthair cat, Coco, is captivated by Countryfile – and eagerly watches any programmes around nature. Catherine Davidson, from Colchester, says her one-year-old Coco often attempts to climb up and reach the television too.

Domestic shorthair cats, Oscar and Theo, love nothing more than to wind down and watch Winterwatch at home with their mum, Anna Wisniewski, 33, from London. The two peas in a pod are also known to paw at the television when watching.

Holly Monaham from Sheffield, who fosters felines, says singing shorthair tabby, Bryan Furry, loves watching birds on Cat TV and sometimes smacks the screen to swat at them – leaving paw prints on the television. Overcome with intrigue, the curious cat also investigates behind the television – hoping to find the flying birds. 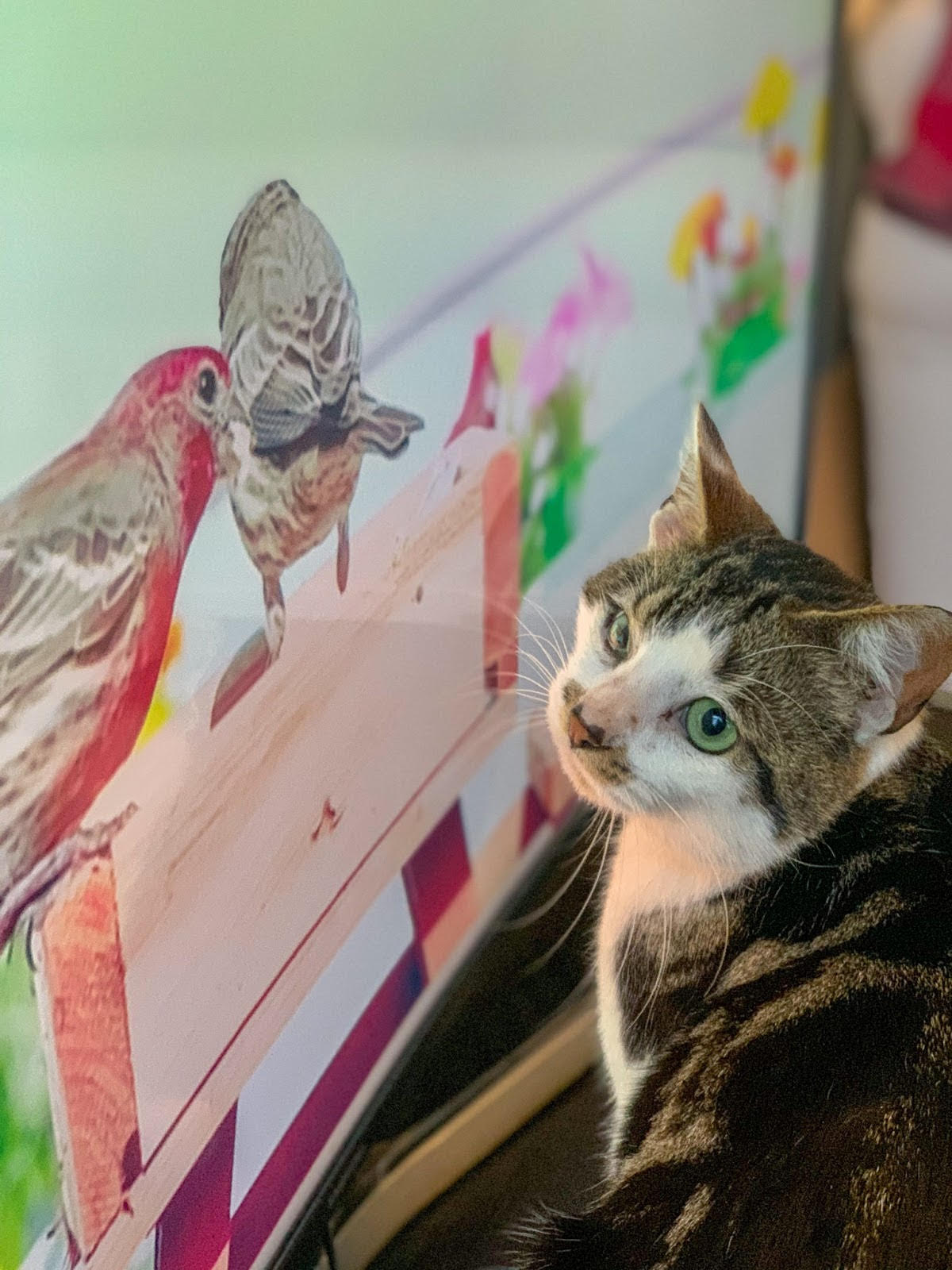 Marie Souter, 47, a nurse from Ipswich, says her feline friend Richmond loves watching BBC Big Cats – and confesses that Richmond often gets so excited that he falls off the edge of the cabinet! 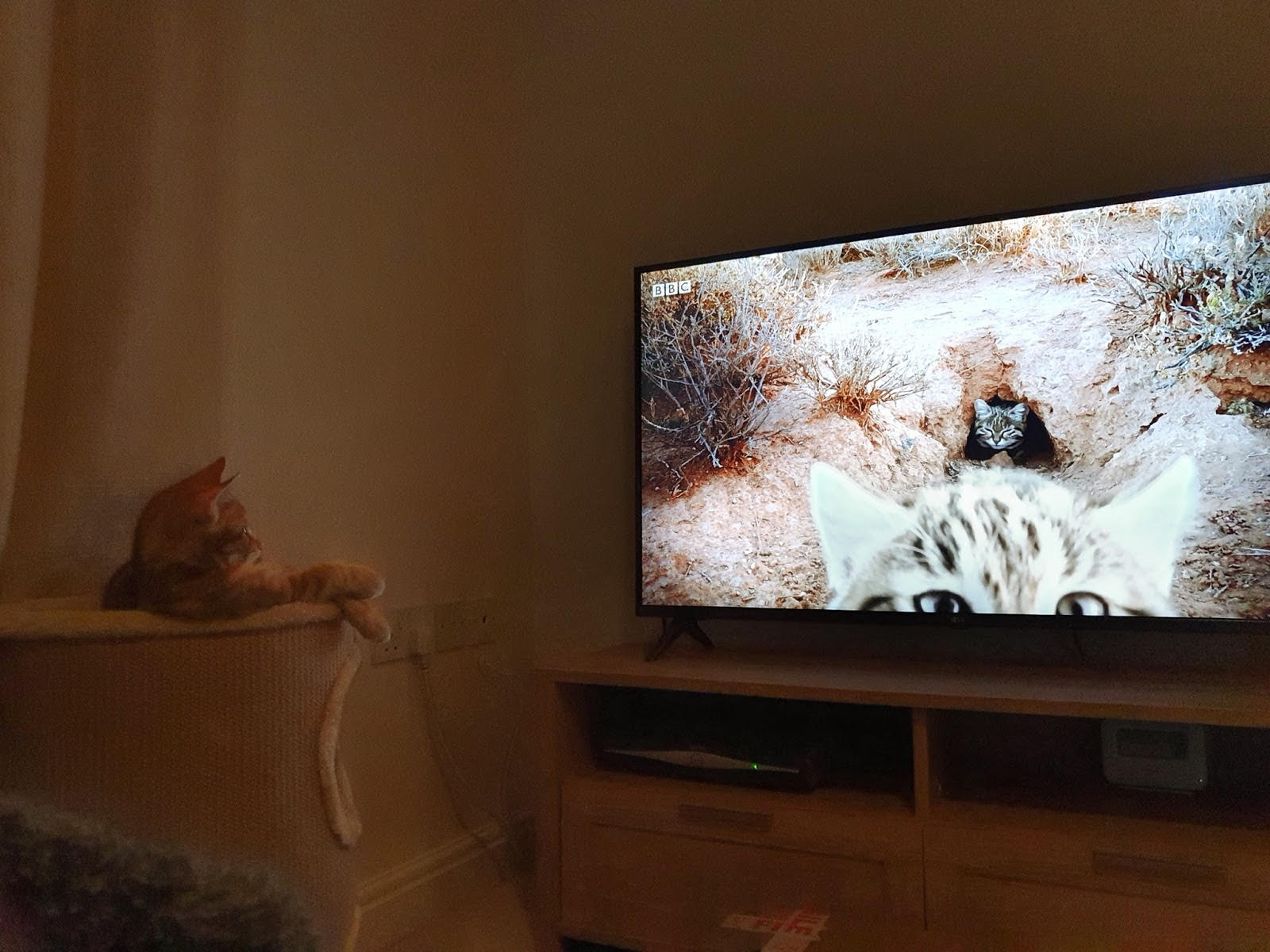 Winner Kiki Tsoulouhopoulos, from Cheshire, won an entire year’s supply of Natusan’s 100% natural and biodegradable cat litter. To find out how much cat litter waste your household produces, complete Natusan’s Waste Calculator and get 50% off your first 10L bag of litter.

4 thoughts on “The Nation’s Most Eco-Minded Moggies”