A nursing cat and her kittens were found nesting in a tree at the back of an industrial site, watched over by a doting tom cat.

When Cats Protection volunteers followed the mother of a newly born litter believed to be at risk, they were shocked to find her three kittens nesting in an old bird’s nest, high up in a tree in Buckinghamshire. There were concerns that the kittens may fall out and injure themselves.

The incredible rescue began when volunteers from Cats Protection’s Chiltern Branch went to investigate reports of a welfare issue with a colony of cats on an industrial site in Amersham.

Welfare team member Ruth Goller said: “When I got there a lady came out to tell us she had been feeding a cat from the colony who had very recently given birth and she thought it was in need of our help. 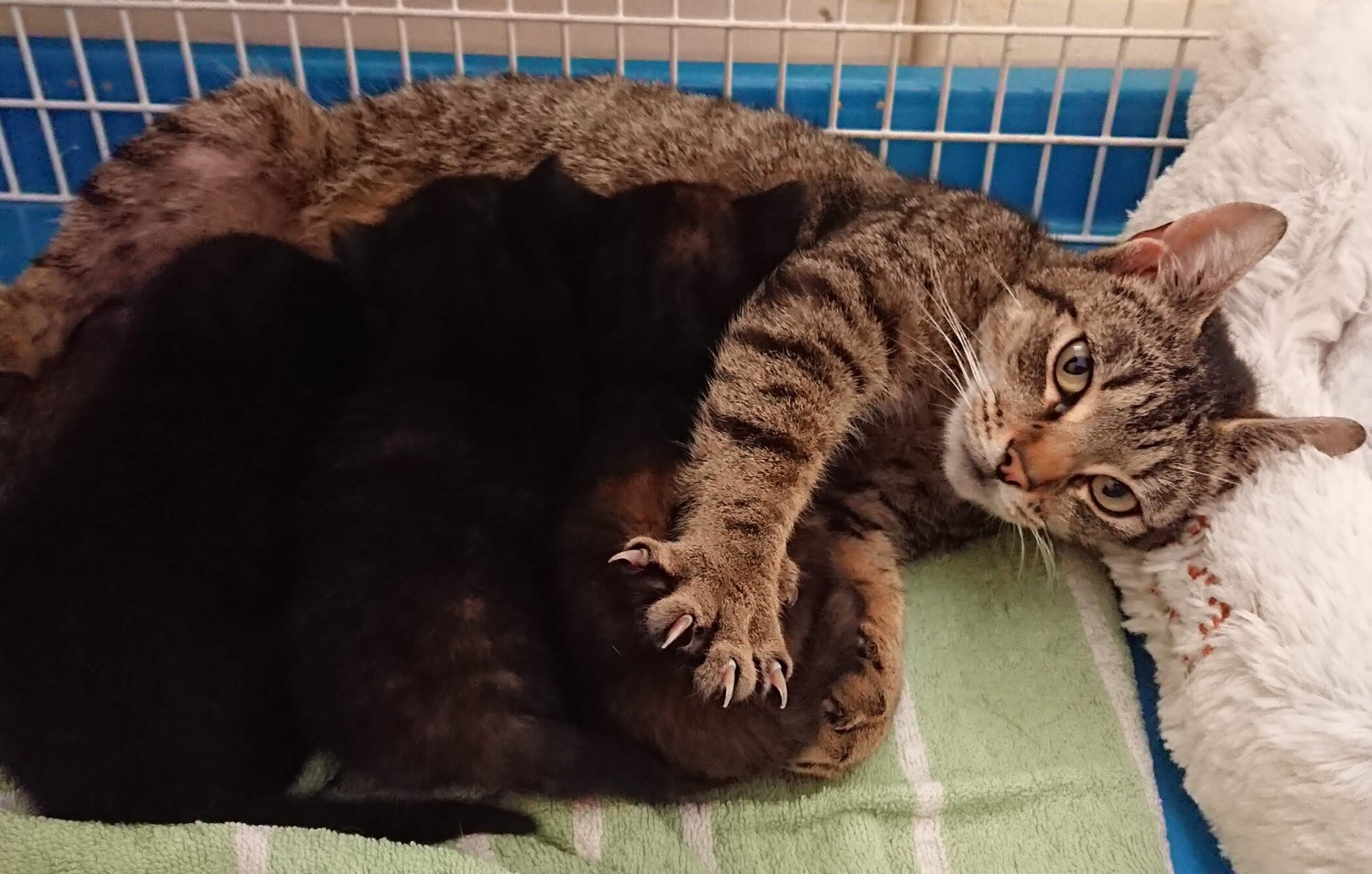 “A newborn kitten, the same age as this litter, had been found dead on a lady’s doorstep, so our priority was to find the mum and remaining kittens as quickly as possible. We spent a week searching gardens, leafletting a huge area and asking residents to keep an eye out for where mum had hidden the kittens. We even set camera traps, but to no avail.

“Then one morning the mum showed up with a male who seemed bonded with her. I watched her eat and it was obvious that she recently had kittens and was still feeding, but we had no idea where she had stowed them.

“The mother and tom were friendly. I stroked them and we had confirmation from site owners and residents that they were part of the site colony. From that first encounter, it was also clear that the tom was injured and needed immediate veterinary attention.”

Having determined that the welfare of these cats was at risk, Ruth knew she must act fast.

When the male disappeared around a corner and the mother called for him, it was clear they were a bonded pair. Hoping that they would lead her to the kittens, Ruth watched as they leapt up a tree at the back of the site.

She said: “I wanted to get a closer look so clambered on some containers and reached up into the tall tree. That’s when I saw a nest with mum feeding three kittens right in front of me. I was so glad to have found them. The male was watching from nearby.”

Relieved by what she found, Ruth set humane containment traps, then backed off and waited.

She said: “I was worried the mum was going to move the kittens as she knew we had discovered her nest. The kittens were still only a week old and really small, so we needed to trap her first safely and then we could carefully pick the kittens out of the nest.

“After a few hours waiting the mum came down and went in the trap. That was our chance. We went back up the tree and, as the tiny kittens were only a week old, it was easy to pick them out of the nest and put them in a cat carrier.”

Safely secured, mum and kittens were checked over and transferred to Cats Protection fosterer Sue Buck.

Once he was also in care, it was confirmed that the tom needed veterinary attention, Ruth said: “He was in a bad way, limping really badly and walking only on three legs. I rang our vet who agreed to assess his injury. It turned out he had an abscess on his foot so he stayed in for a few days.”

Thankfully, the abscess healed well and, after being neutered, the male – since named Willet by his rescuers – has been reunited with the mum Oriole and her kittens Bran, Jay and Lori. The cats were all named after birds.

Sue said: “He is a good ‘dad’ to the kittens, washing and playing with them – although he does get a bit annoyed when they mistake him for mum at feeding time.

“They’re a lovely little family. Willet behaves like a doting dad to the kittens, even grooming them. Oriole and Willet are clearly bonded and we would love to think we could rehome the mum and male cat together.”

Kathryn Graves, Secretary of Cats Protection’s Chiltern Branch, said: “It is very unusual for a tomcat to stick around after kittens have been born. In fact, I’ve never seen it before.”

The kittens are still young and the branch is not taking enquiries about their adoption yet. Updates will be posted on the branch’s Facebook page.

Cats Protection has learned that some years ago former businesses on the site adopted nine neutered cats to help with a rat problem. Shortly after, a number of stray cats attached themselves to the colony, had more kittens and the numbers grew. Some of the cats, such as the mother and tom, remained friendly when fed by local people and were therefore suitable to be rehomed as pets.

Ruth said: “There are still strays there who need our help so we have been discussing their care with the workers and a number of cats have already been trapped and neutered.

“We have to make sure we get only the strays as there are lots of owned cats there, so we have used wildlife cameras, social media and leaflets and we are talking with residents to encourage them to neuter and microchip their own cats.

“It’s difficult for us as a small branch with only a few fosterers to help such a huge number of cats, so we appreciate any support we can get from the local community and businesses.”

Donations to support the ongoing work of Cats Protection’s Chiltern Branch can be made at: https://www.justgiving.com/fundraising/Chiltern-Branch-Cats-Protection2