This article first appeared on iCatCare:

Dr Naima Kasbaoui, a member of our iCatCare Feline Wellbeing Panel, reviews a recent paper by Angelo Quaranta and colleagues investigating how good cats are at matching visual and auditory information from both cats and people – a measure of their ability to recognise emotions.

What was the research question?

For a long time, cats received less research attention than dogs and their cognitive abilities were less understood. In the last ten years, this field of research, i.e. trying to better understand our feline companions and what they are able to do, has grown exponentially. It has been shown that cats are able to recognise other cats, either by sniffing them and identifying their unique chemical profile, or by hearing them. Cats can also discriminate between familiar and unfamiliar humans, recognise human faces and voices, and make the mental match between the two. But are cats capable of recognising emotions, in their feline fellows and in people? Are they able to recognise when a person or a cat is angry or happy? And would they be able to do that by integrating visual and auditory signals? That is what researchers within the Department of Veterinary Medicine at the University of Bari, Italy, set out to investigate.

First, the authors recorded sounds of one male and female cat, each of them in two situations, the first where they would hiss and the second where they would purr. Also, a man and a woman were recorded laughing and growling. Finally, a neutral sound (Brownian sound) was downloaded from the internet. Authors then took photographs of the same cats hissing and purring, and of the same people demonstrating a “human angry face” and a “human happy face”. 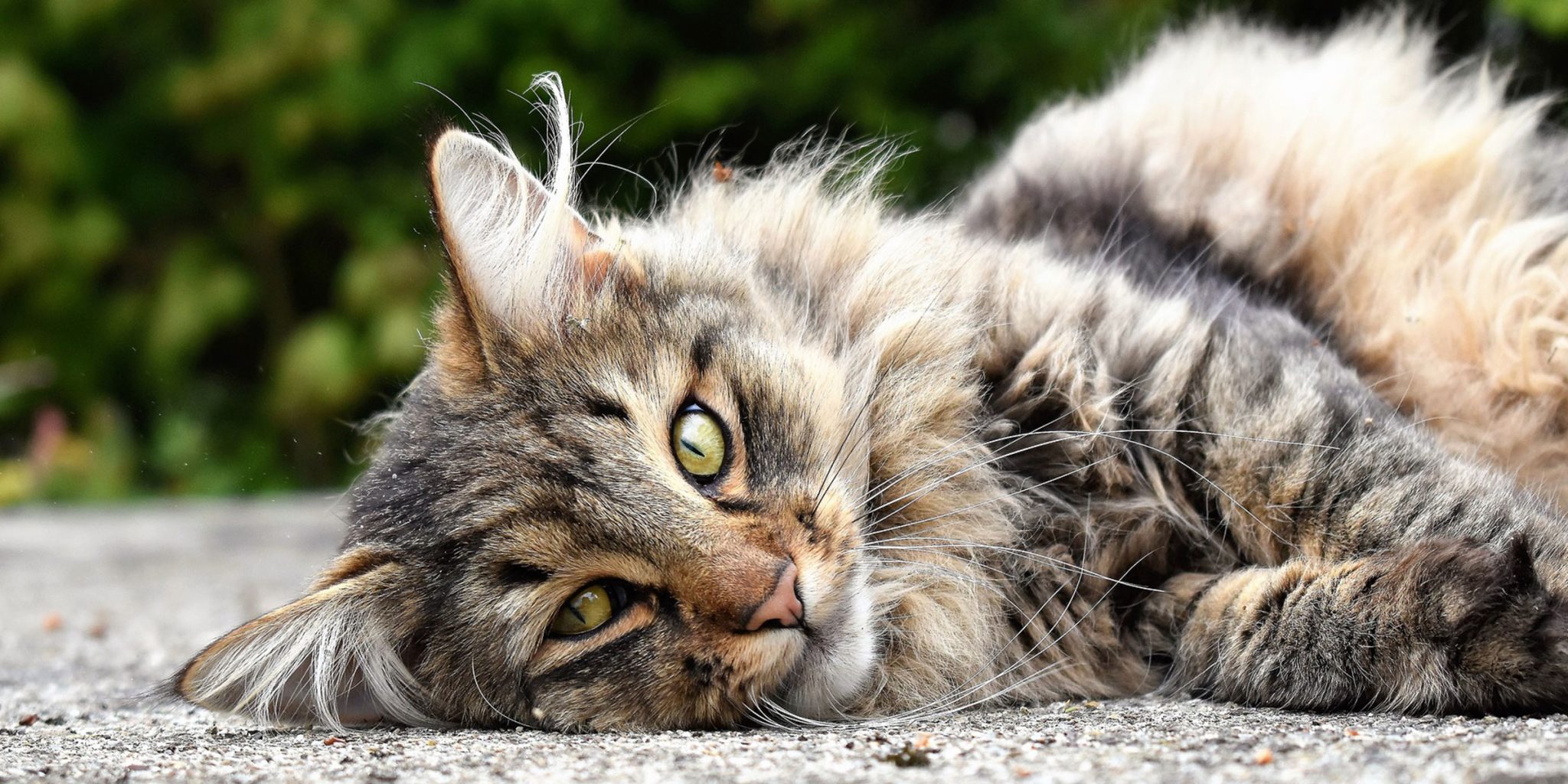 How did the researchers proceed?

Ten cats were tested in their own homes. In a quiet room, a projector and screen were installed, and a speaker was placed behind the screen. Cats were facing the screen, sitting on their owner’s lap.  Each trial consisted of a recorded sound (angry, neutral or happy) emitted by the speaker whilst two faces were simultaneously projected on the bottom corners of the screen. If the sound was hissing or purring, the “hissing cat face” and “purring cat face” would be projected, and if the sound was laughing or human growling, the “human happy face” and “human angry face” would be projected.

The question was “will the cats be able to match sound and face”, and to answer it, the duration that the cats spent looking at each face was recorded, along with a whole range of behaviours that could be considered expressions of stress or discomfort. Every trial was filmed by two camcorders. Researchers looked at what face the cat would look at the longest, using a congruence index: the longer the cat looked at the face matching the sound, the closer the index was to 1. If, on the contrary, the cat always looked at the face not matching the sound, the index would read minus 1.

What were the main findings?

After analysis, researchers found that cats were looking significantly longer at the face whose expression matched the sound they heard, for “cat hiss”, “human anger” and “human happiness”, but interestingly, not for “cat purr”, maybe because there is not an easy distinguishable face for purring in cats. They also found that younger cats (3 to 4 years) were better at this task than older cats (5 to 9 years). Regarding the “stress behaviours”, they found that cats displayed significantly more “stress behaviour” to “cat hiss” and “human anger” than for any other stimuli. Interestingly, no significant differences in stress behaviours were found between “human happiness” and “cat purr” although scores were generally low.

What did I enjoy about the study?

I found this study really interesting because it takes our understanding of cats and their abilities a bit deeper. From previous studies, in cats and other companion species (dogs and horses for example), we know that they are able to match voices and faces, but here it is demonstrated that cats are able to recognise two emotions in human (a positive and a negative one), and that they are able to recognise the message conveyed by a cat hiss and look at the matching cat face. I liked the use of the preferential looking paradigm (i.e. presenting two faces) and the congruence index as I think it would have been harder to draw a conclusion if cats had only one face to look at. They also tested the cats in their usual environment, which is a good thing as cats can take a lot of time to habituate to a new place, room, or even to changes in a room! This paper also put the information in context, comparing to other studies and other species, showing that living with humans has influenced cats, even if society often thinks of cats as more independent animals than other species such as dogs and horses.

What questions do I have and where could the research go next?

I thought that the range of behaviours used to measure stress were quite wide and that it is difficult to be sure that all those behaviours, even during the experiment, could be considered to be indicative of a negative emotion and therefore stress. For example. “braced legs”, could be influenced by the cat’s starting position, and “seeking attention from owner” could simply be that the cat is on its owner’s lap and wants attention, not that it is stressed. In fact, cats do not usually seek their owner’s attention when they are stressed, they are more prone to retreat and hide.  It would have been interesting to go into more detail, for example, to know which exact behaviours were performed when in relation to which stimuli were being presented. If the set up allowed it, I would also have added more subtle stress behaviours such as lip licking, head shaking, and maybe some positive behaviours to see if they were performed during the presentation of positive emotions.

I would have liked to know if some habituation time was given to the cat to explore the room once the setup was in place, although the authors did mention that cats habituated to the whole procedure very quickly.

Finally, I completely agree that the study demonstrates that cats are able to recognise cat and human emotions by integrating visual and acoustic emotional signals, I don’t think that we can go as far as hypothesising that the ability to recognise human emotions could be innate in cats. Even the younger cats in the study had at least 35 months of living with humans to experience a diverse range of emotions and learn to recognise them.

This is an interesting study that helps us to know more about cat’s abilities to navigate the world of human and cat emotions. I am looking forward to further studies that could explore more complex emotions and also explore the difference between kittens and adult cats.

A huge thank you to Naima for interpreting this interesting piece of science for us. iCatCare’s take home message from this is that cats can find negative vocalisations and facial expressions (from cats and people) stressful so in order to protect their welfare, let’s keep our homes and places we work with cats as happy places as possible. In fact, that’s good for all of our stress levels!

Or, if you’re interested in learning more about feline behaviour, iCatCare can scratch that itch with our online, distance-learning courses.

For cat owners, volunteers and enthusiasts, our Introduction to Feline Behaviour course will give you an introduction into the mind of the cat, why they behave as they do and how we can best provide for their behavioural needs. This course is built on information from leading behaviour experts and the most up to date knowledge. Follow the link to find out more.

For cat professionals, our Advanced Feline Behaviour for Cat Professionals course has been designed for cat professionals, be that as a fosterer, breeder, cat groomer, volunteer or staff member in a rehoming centre, or animal behaviourist, to further their understanding of feline behaviour and the implications this has for their career. The next course starts 03/03/2021. Find out more by following the link above.

For veterinary professionals, our Advanced Feline Behaviour for Veterinary Professionals course is the ideal way for you to further your knowledge of feline behaviour. Written by leading feline behaviour experts, Dr Sarah Ellis, Dr John Bradshaw and Vicky Halls, this course includes all of the most up to date science and knowledge and provides a solid professional foundation in many aspects of cat behaviour. The next course starts 05/05/2021. Follow the link to find out more.

One thought on “Spotlight on Science: Emotion Recognition in Cats”