After Blue Cross launched a nationwide search for Britain’s most heroic pet, Carrots the cat proved to be head and tails above the rest!

Leading pet charity, Blue Cross, has announced that blind therapy cat, Carrots, has been awarded the historic Blue Cross Medal – for his role in helping to bring happiness and comfort to patients and their families at a Marie Curie Hospice in Bradford.

Set up by Blue Cross during World War One, the Blue Cross Medal celebrates heroic pets who are changing or saving lives across the UK – with one pet being awarded the winning medal each year. Earlier this year, the charity launched a nationwide search for pets with an extra-special ‘tail’ to tell, in order to find it’s 2020 winner.

Of the 143 nominations submitted, a panel of judges were so impressed with the four-year-old ginger tom cat and his work with sick, unwell and dying patients, that they decided to award him this year’s Medal – which also marks the 80th anniversary of the prestigious award being presented to an animal.

When he’s not chasing after his favourite scrunchy ball, Carrots is a familiar face at the Marie Curie Hospice on Maudsley Street in Bradford, where he is busy bringing relief and joy to those living with anxiety and depression – as well as those receiving palliative care. Carrots first started visiting the hospice almost three years ago when his owner, Katie Lloyd, was diagnosed with an Anaplastic Astrocytoma – but it is not just Katie’s life that he transformed while he was there.

Carrots was brought into a local cat rescue as a tiny kitten with serious eye injuries. Sadly, he lost them both due to a congenital eye defect, but the ginger and white moggy’s warm and confident way with other patients at the hospice allowed him to sooth and comfort them. He soon became nothing short of a furry legend with patients and staff and was visiting twice a week to carry out his therapy duties.

He is the only therapy cat within Marie Curie Hospices throughout the UK, and is the UK’s only blind therapy cat. 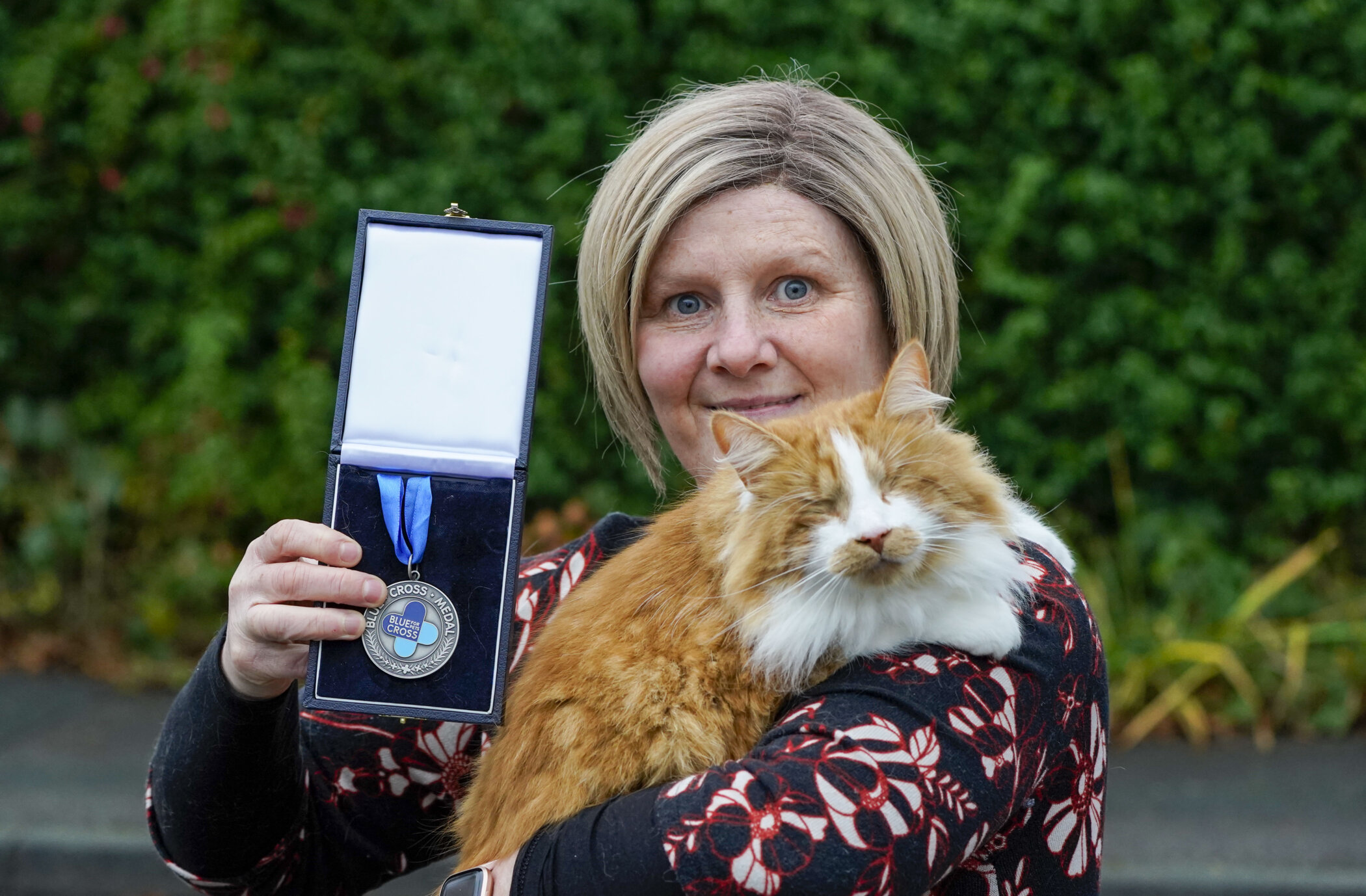 Katie Lloyd from Bradford with her cat Carrots who is blind. Carrots is the proud winner of a Blue Cross Medal for visits he made to a Marie Curie hospice to comfort terminally ill patients.

Carrots’ owner, Katie Lloyd, said: “I’m so incredibly proud of Carrots for winning the 2020 Blue Cross Medal. I’m really humbled and didn’t expect Carrots to get this kind of recognition.

When Carrots first arrived I knew immediately that he was a special boy. He has been my companion for many years, helping me get through some of the hardest times of my life. Whenever I am going through my therapy treatment, he seems to have a ‘sixth sense’ that I need additional comforting and makes me feel so at ease.

He has also been there for everyone at the Marie Curie Hospice in their hour of need and is special to so many people. He loves visiting patients and settles beside them so that they can stroke him and listen to him purr. He touches the hearts of everyone he meets and has a great sense of love and responsibility.

I’ll never forget one evening when we received a call from the Hospice to say there was an older gentleman facing difficult circumstances. He was very distressed and agitated and was requesting a visit from Carrots – so we travelled to the Hospice right away. When he saw me with Carrots on my shoulder at the door, he immediately relaxed. Shortly after Carrots snuggled down on the bed with him, the gentleman fell asleep. It was probably the first rest that he had managed to get in 12 hours.

During the Covid-19 pandemic he has really missed seeing his friends at the hospice, so he’s been busy writing letters to some of the lovely people he’s met through his therapy work. He signs off all his letters with a paw print of course!”

Julia Mckecknie-Burke, Blue Cross Director of Fundraising, Marketing and Communications and one of four judges on this year’s panel, says: “With the Blue Cross Medal we want to celebrate the extraordinary things pets do for us and how they change our lives.

Carrots is a perfect example of this, and we’re honoured to award him the Blue Cross Medal on its 80th anniversary, placing him alongside a long list extraordinary pets that have transformed or saved human lives.”

The idea of the Blue Cross Medal was first conceived in 1917 during World War One and was given to people who helped rescue animals. However, the first time it was presented to an animal specifically was in 1940, to a dog called ‘La Cloche’, for saving his owner from drowning – after a German torpedo hit their ship.

Last year’s Blue Cross Medal winner was self-taught assistance dog, Lily-Rose – an eight-year-old papillon-cross who saved her owner from choking and alerted the owner when her mother collapsed after a heart attack. Other outstanding winners have included a 19-year-old cat called Jim in the 1940’s who saved the lives of his family from a fire, a Labrador called Daisy who trained to detect cancer, a blood donating Staffordshire bull terrier called Romeo, and a young mastiff called Lemmy, who brought his young owner back from depression.

To find out more, visit www.bluecross.org.uk/medal.