Moving with a cat can be a challenge, moving with Bozo was definitely an experience. After living several years in the LA area, I changed jobs necessitating a move from Los Angeles to Minneapolis, MN. The company paid for my relocation (including transporting my car) and gave me a first-class ticket.

Bozo helped with the move … jumping in and out of boxes, slinking along the floor (did he think he could not be seen?) when the cable company staff and movers came, etc.

Because I would be carrying Bozo plus checking luggage and getting a car rental when I arrived, I thought that taking a red-eye would be the most convenient for both of us. This was pre-9/11 and the TSA security lines. A friend took us to the airport. Bozo was behaving very well in his zippered carrying case. Bozo and I boarded the plane and I put him under the seat in front of me, telling him it would be a fairly short flight.

After take-off, snacks were served and then the cabin was darkened. I was relaxing when the man sitting in front of me frantically started waving to get the attention of the flight attendant. When she came to see what he wanted, he said: “there’s something moving on the floor!” I looked down and staring up at me was my gorgeous blue-eyed Bozo! How had he gotten out of the case? I immediately picked him up and considered myself very lucky that the people sitting nearby either laughed or remained asleep.

I put Bozo in the carrying case and kept it on my lap, petting and talking to him.

Need I say it was quite the challenge to get a cart, collect my checked luggage, have Bozo remain in the carrying case (with the broken zipper!), hoping that he did not manage to reopen it.

I went to the car rental and from there to a diner as it was too early to go to my new apartment. They let me sit at a table with Bozo in his case next to me. We then proceeded to our new apartment.

The manager met me, showed me around the apartment and then somehow Bozo disappeared — after several frantic moments, turned out he had gotten in back of the refrigerator. Obviously, he wanted to explore our new place.

Bozo adjusted quite well to Minneapolis, even venturing onto the balcony in the winter to investigate snow. He much preferred the balcony when the weather was warm. He was still my crazy beloved cat – alternating between being sweet and ferocious. 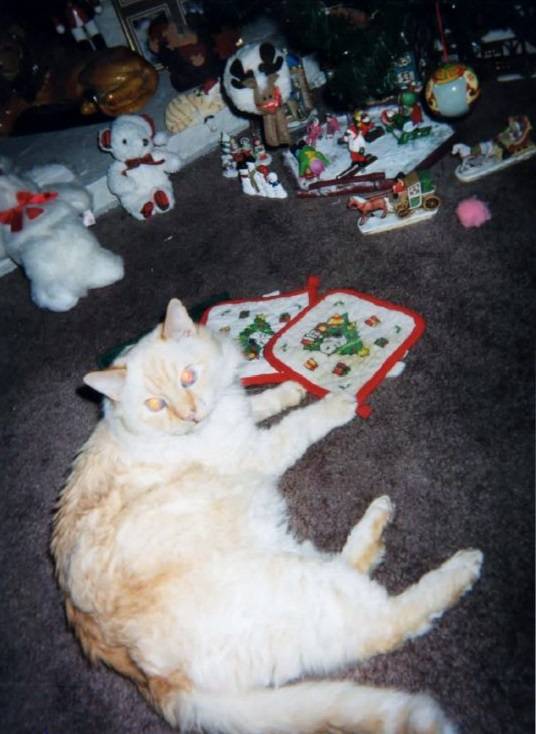 We lived in Minneapolis for two years and then I got a transfer to the west coast.

Many of my posts are about travel but also I write about Cats / Cat Tales, which includes posts/photos of Bozo, Jameson and other cats I have known at www.JourneyswithEileenDiane.com