A year ago Mookie was showing signs of weight loss and loss of appetite.  He was diagnosed with advanced kidney disease with only 25% of his kidneys functioning.  It was a scary time getting the diagnosis, then leaving him at the vets for three days of fluid therapy.  I didn’t know what the outcome would be. 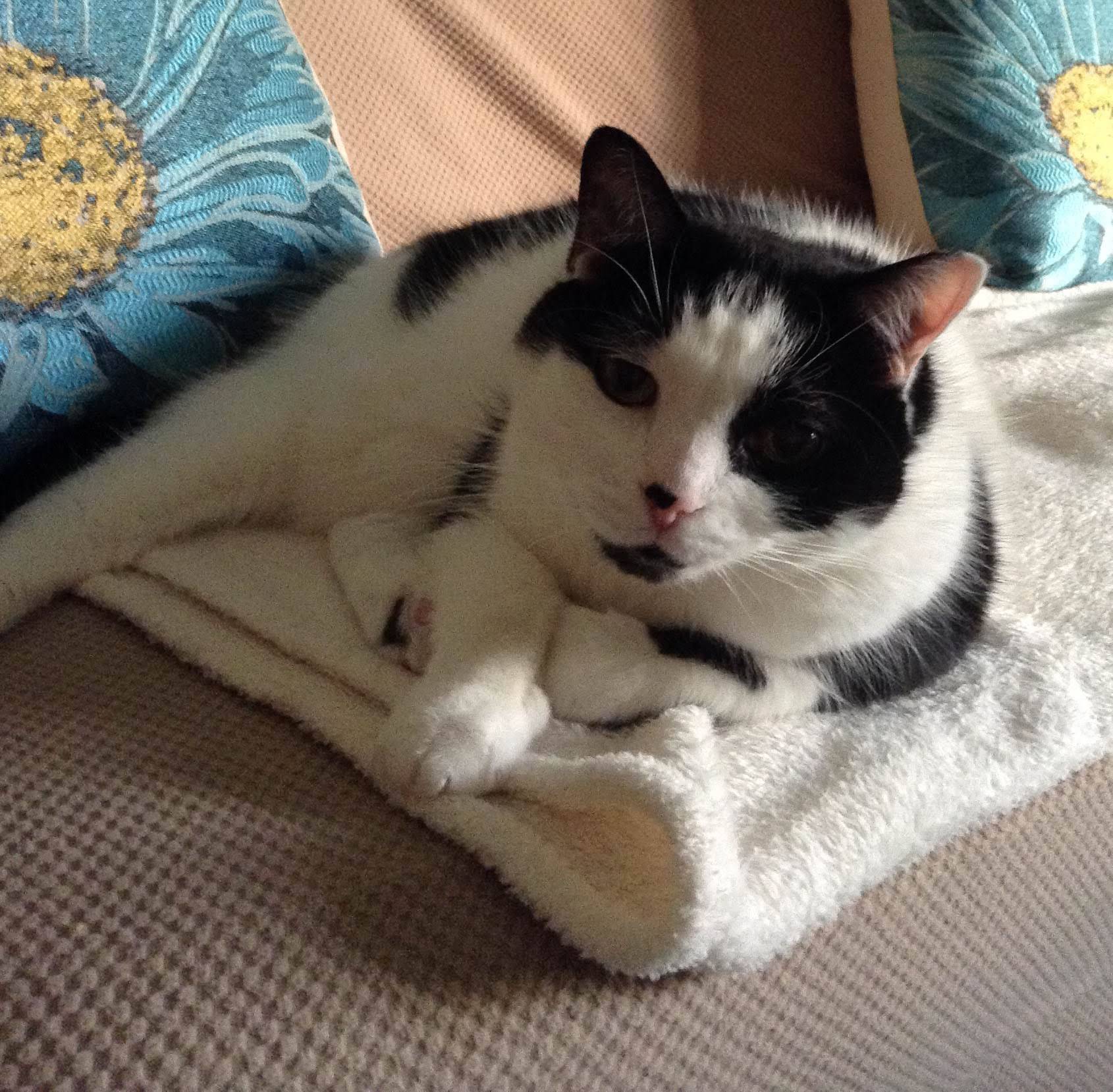 He’s on a reduced protein and phosphorus canned food.  Too much protein makes the kidneys work harder.  There’s a medication to block any phosphorus from reaching the kidneys.  A cat with kidney disease can’t regulate the levels of phosphorus, which can cause more damage.

He was also given medication for high blood pressure, which is common in cats with kidney disease.

Mookie didn’t mind the change of food at first, but soon became fussy and stopped eating.  His food doesn’t have much smell, so probably doesn’t have much flavor either.  He thought his brother’s food looked better.

He was only 6 pounds, so I had to quickly find a way to get him eating again.  I did some research online and decided to try a child’s medicine dropper.

The food had to be mixed with water so it would go through the dropper. My Mom held him while I did the feeding.  The first time was very messy.  There was more food on the three of us than in Mookie’s mouth.  It didn’t take long for Mookie to catch on and enjoy eating this way and it became less messy after a few days.

This went on for months.  He watched his brothers eat from their plates, but he wouldn’t try.  I think he was more lazy than fussy at this point. Then one day I put a plate in front of him on the floor with his brothers and he started to eat and cleared his plate. 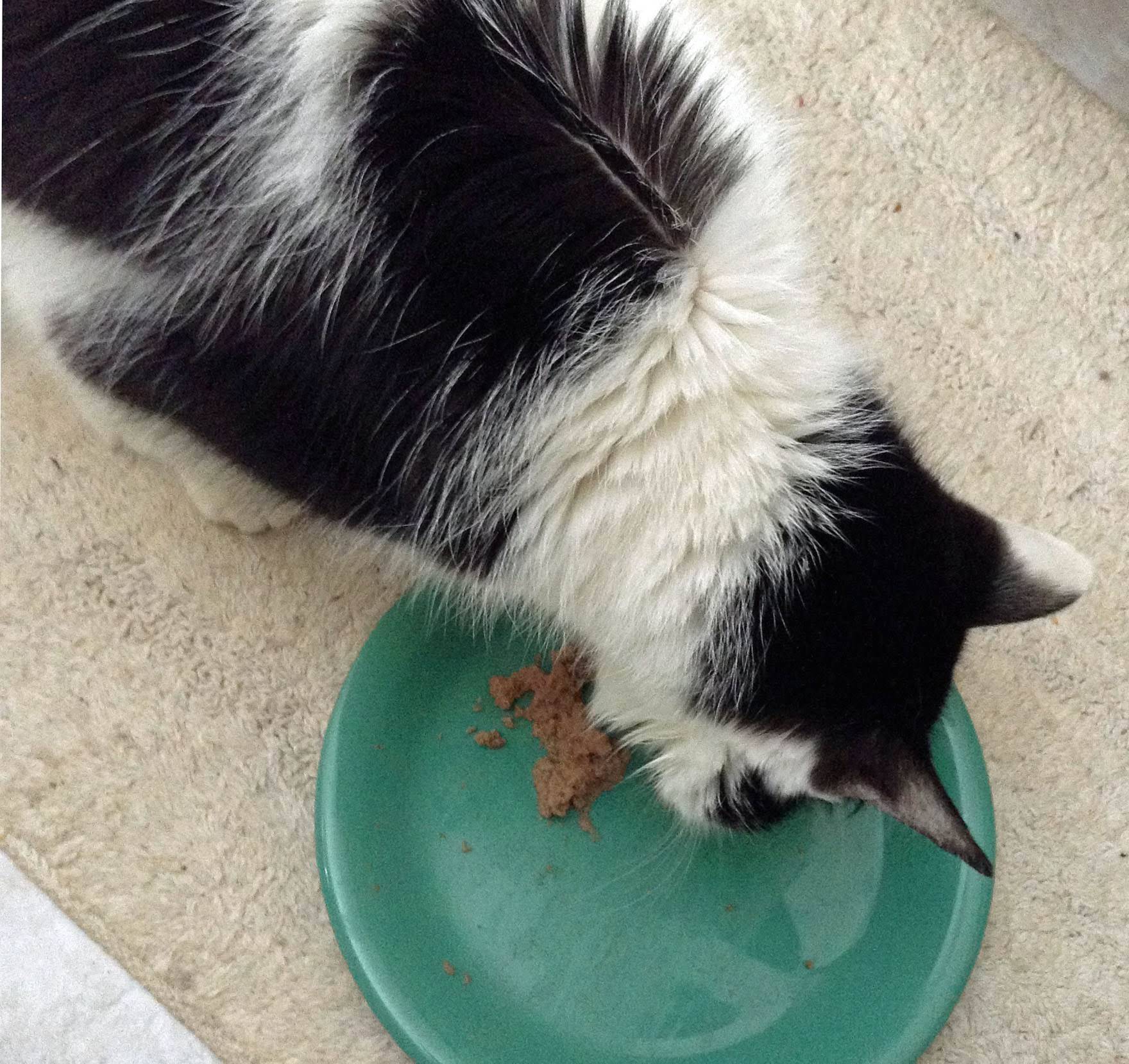 I’ve only had to use the dropper a few times since that day.

Mookie now weighs 5 pounds and has lost a lot of muscle. He has a great appetite, always asking for food, but with a low protein diet there isn’t much chance of him gaining weight. He surprises me with his energy and can still jump to high places. 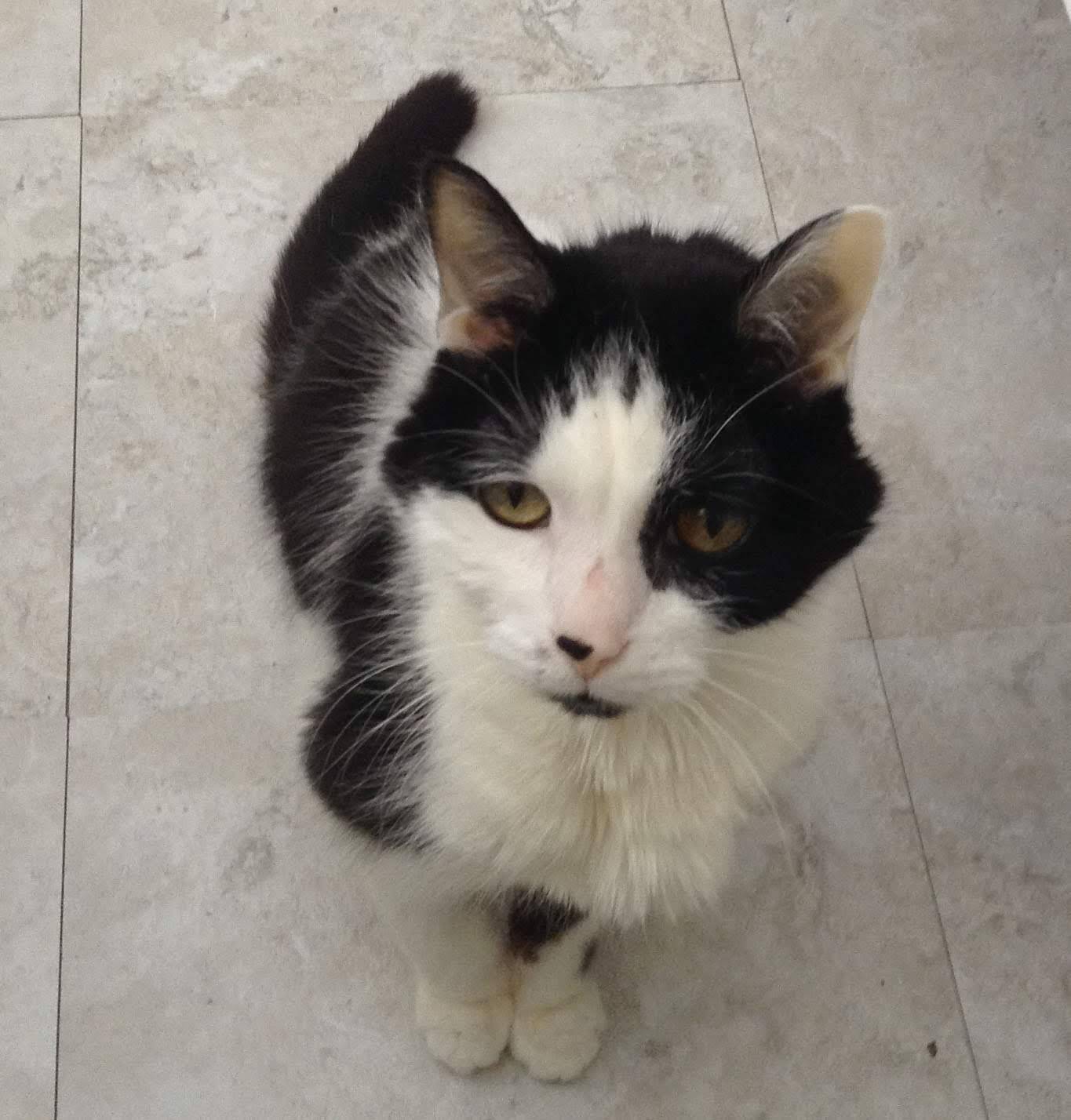 I’ve noticed some changes over the year.  He urinates more frequently, which is common in the advanced stage of the disease.  He also wants to be close to me and my Mom all the time.  As soon as one of us sits down, he’s on our lap. That’s where he is right now as I’m writing this post.

He also likes to snuggle with his brother Teddy. 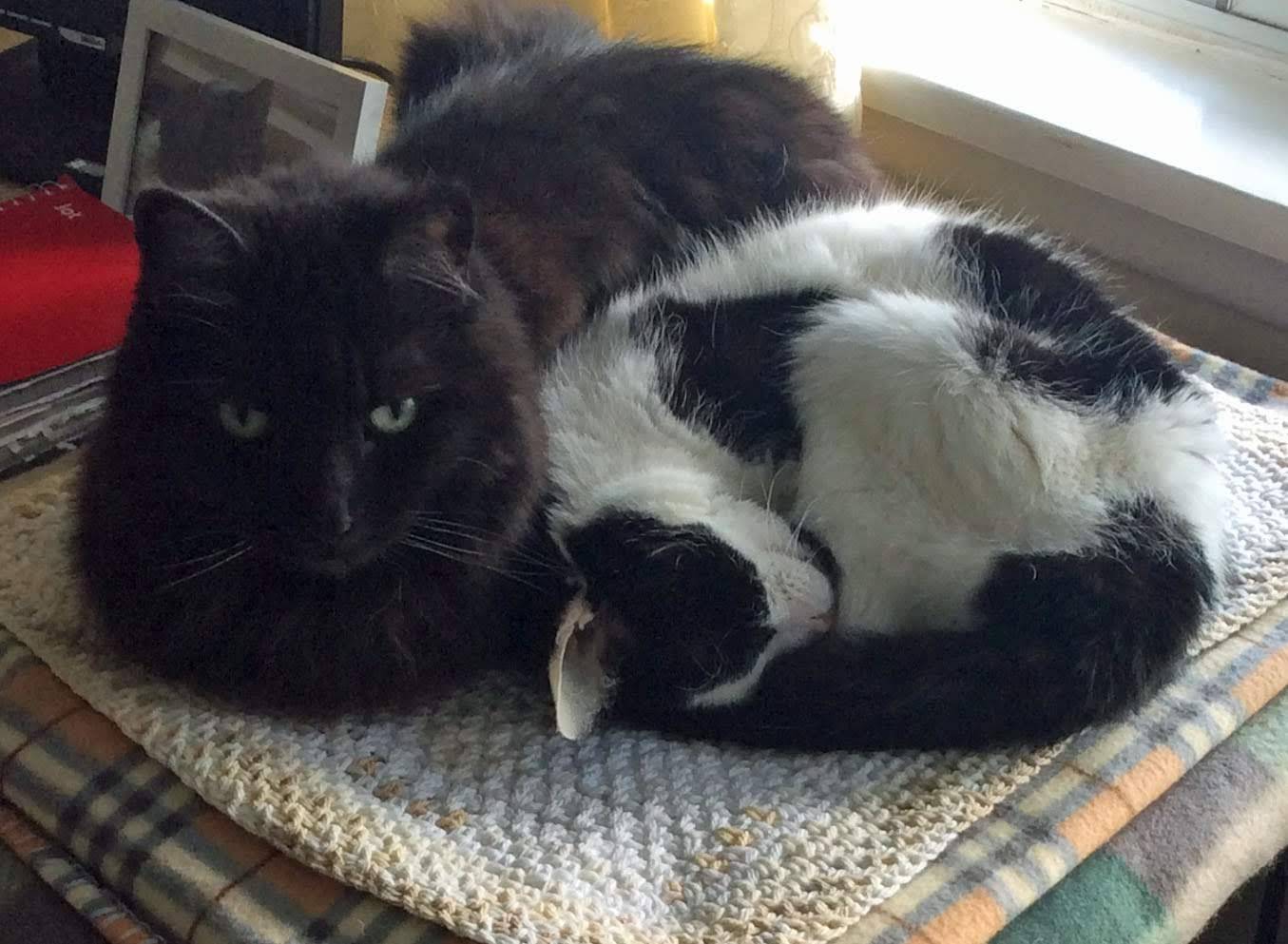 There was good news during his annual checkup last month.  His blood pressure is normal. He is also well hydrated and doesn’t need fluids.  This is thanks to his love of the water bowl.  I also add a teaspoon of water to each meal. 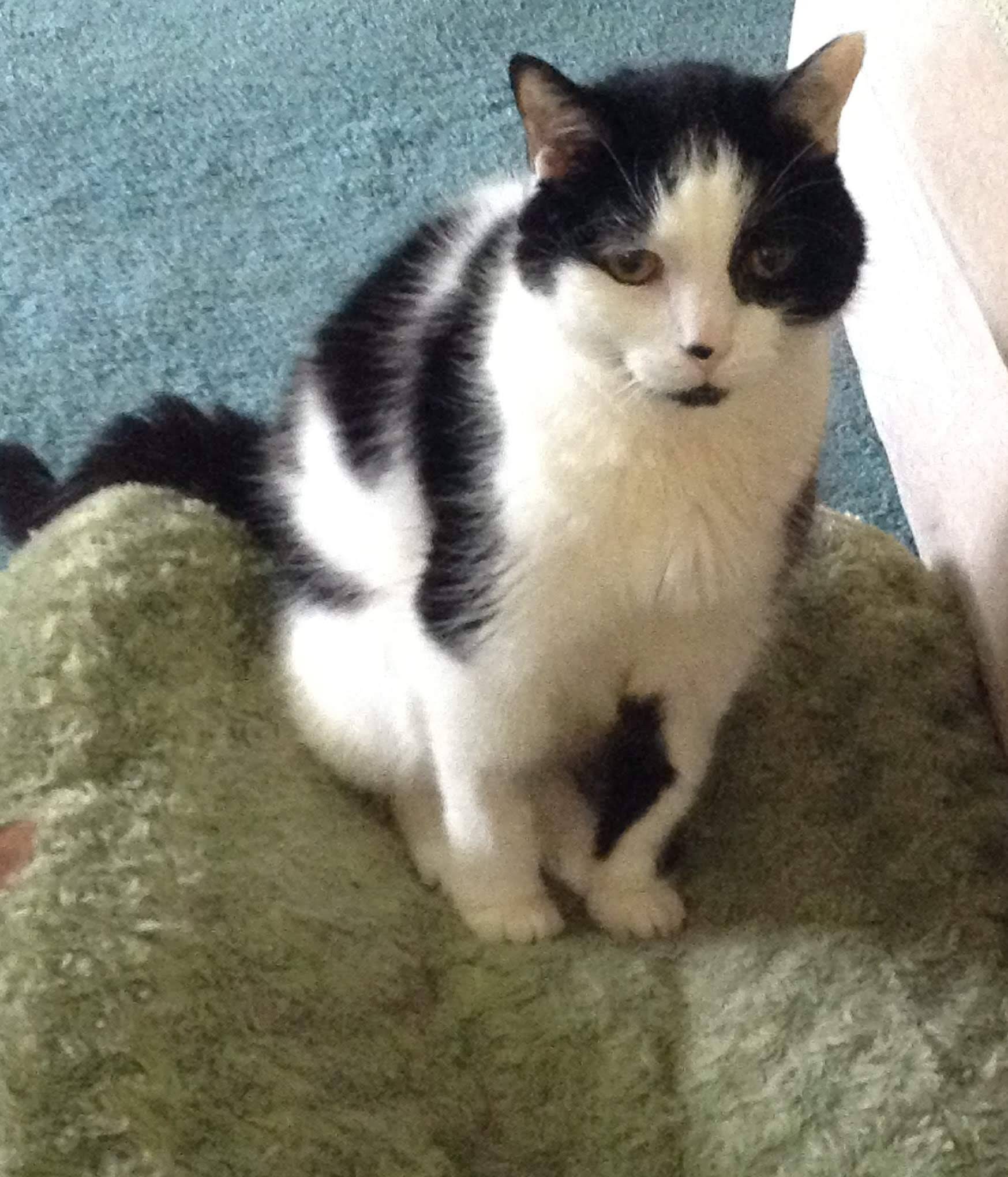 The care for cats with kidney disease has come a long way over the years.  I had a cat that was diagnosed in the early 90’s.  There was no special diet or medication, only fluids twice a month.

A year later and Mookie is doing better than I expected. I don’t want to worry about how long he has with us.  I just want to enjoy each day and give him all the love and comfort that he deserves.