Pearl came into my life with three sisters. All black with tiny spots of white under their armpits and lower bellies. Four friendly females. They had been found in a yard by a lady in Worcester, Massachusetts. Another lady took them from her so she wouldn’t put them on Craigslist, then gave them to Broken Tail Rescue, the group I was fostering for at the time. There is nothing like kitten energy and I needed some. 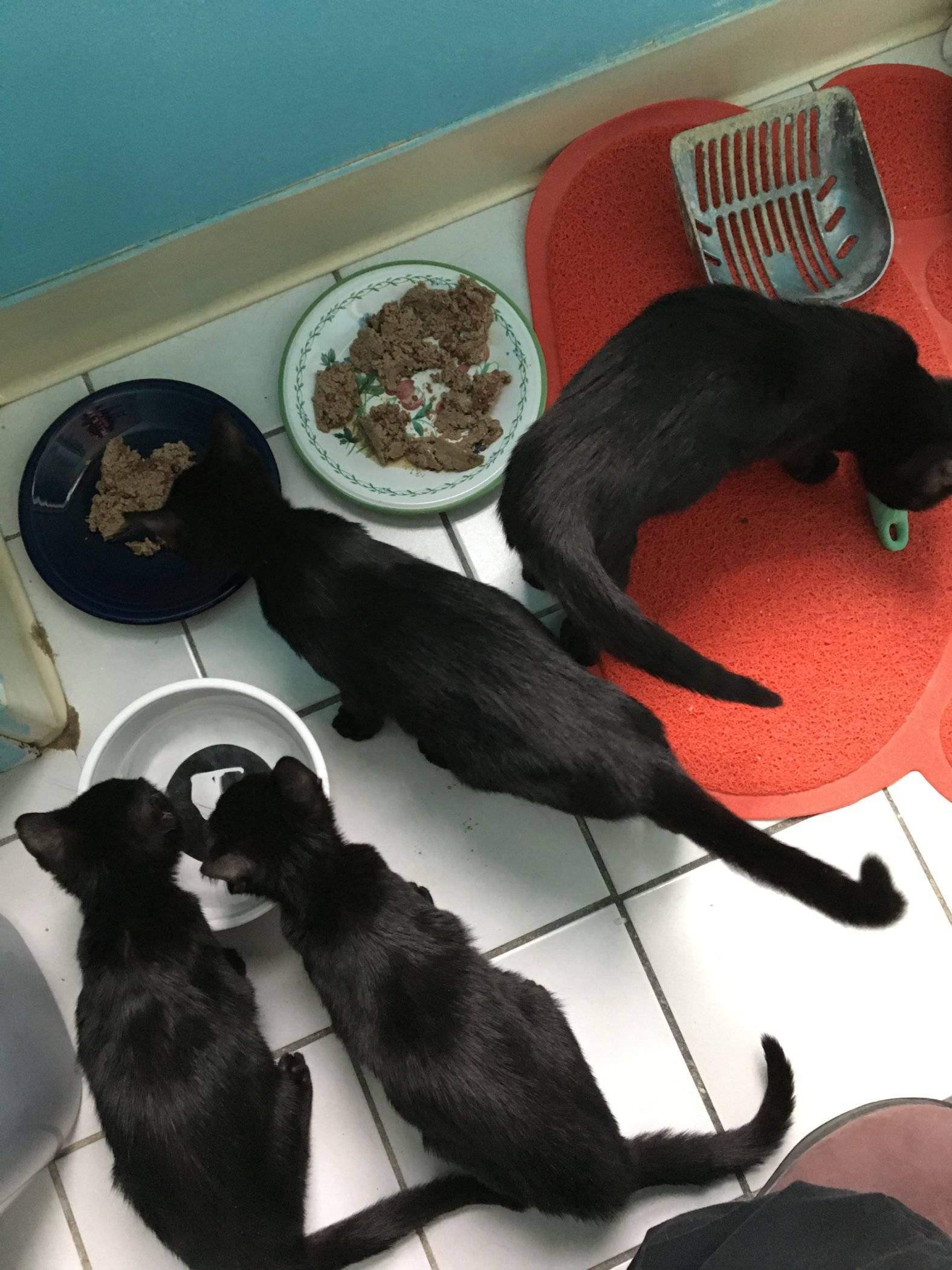 I named them all after jewels: Pearl, Topaz, Ruby, and Sapphire. They were precious jewels of cat friendliness and they crawled all over me. In the beginning they were nothing but eyes. Pearl was the smallest. She and the second smallest, Topaz, liked to ride on my shoulders. The kittens were in the bathroom until their dewormer was sure to work, then they were in the kitchen being treated for an upper respiratory infection. Finally they got the run of the apartment. Pearl would greet me after work by jumping on my shoulders when I bent down to say hi, or else trying to climb me. 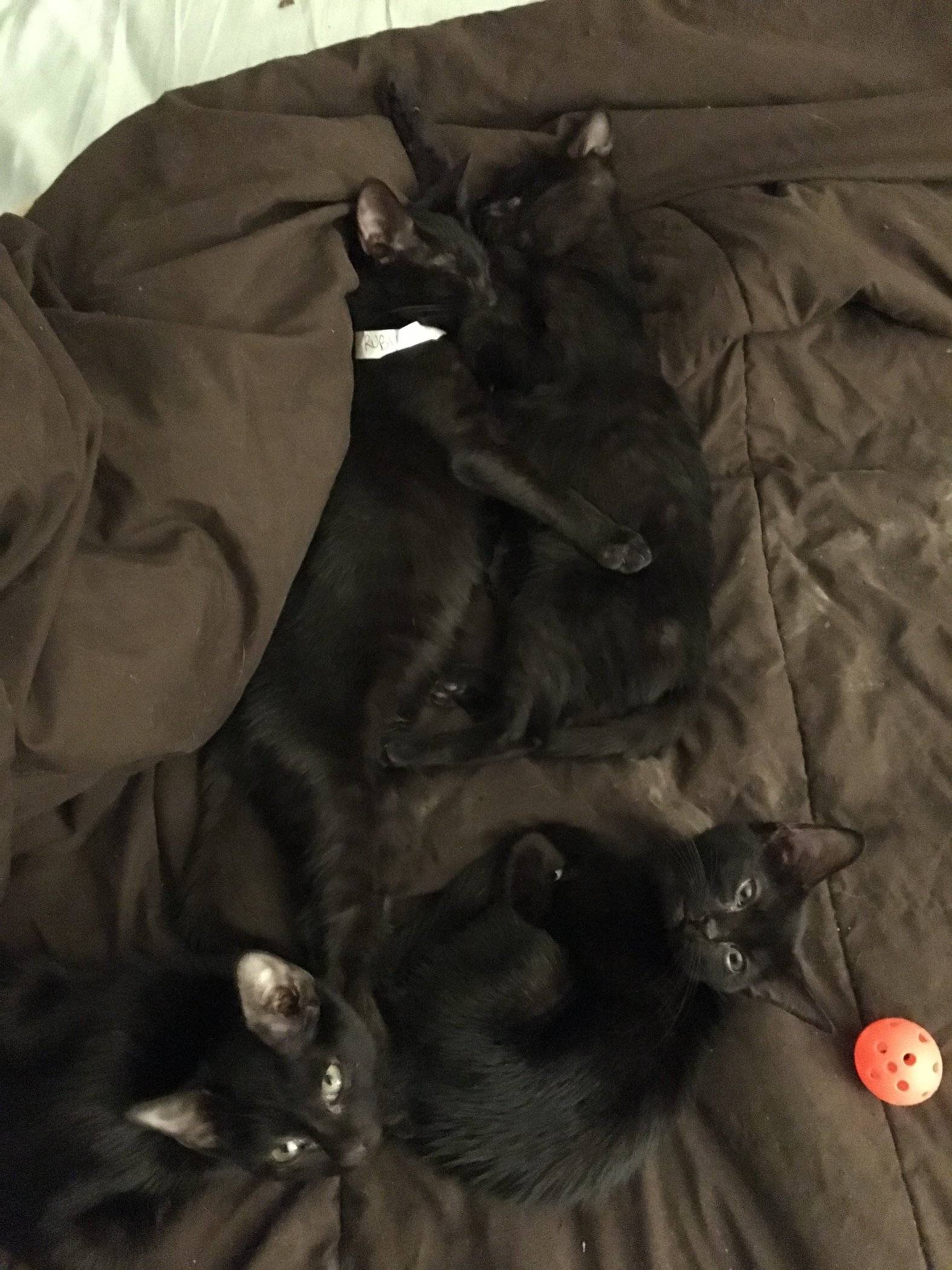 When I took the last two girls to the vet to be cleared of their URI diagnosis, she told me that Pearl had a small indentation in her chest: pectus excavatum. There was a little less room for Pearl’s heart and lungs. I could put my finger in the depression, just the tip. Pearl should probably be in a non-smoking home, and have any upper respiratory issues attended to immediately.

Sapphire and Ruby, the biggest, left my apartment first and were adopted quickly. Pearl and Topaz were next. I got so far as letting Pearl go with Topaz to what we called ISO: the isolation room prior to entering the PetSmart adoption center. This is also in PetSmart but the animals are required by law to be quarantined there for a couple days before entering a place where the public can interact with them.

I knew I had three cats. That was a lot of cats. I probably wanted to continue to foster, too. But Pearl had that motor purr, greeted me, and even tried to wash my hair and neck when I lay down. She made me smile and I felt like I was in love whenever I held her. Of course I could provide her a non-smoking home, but people reminded me that many individuals were out there who could provide her good care. Even my boyfriend said, as he always did, “No more cats!” For days before bringing Pearl to ISO and a night and a day after, my insides battled.

Then I finally disregarded my boyfriend and went with my heart. I wrote my foster coordinator: “I must adopt Pearl.” Done and done! She was able to integrate with my other cats because she was still a kitten, although she occasionally comes to fisticuffs with my Noodle-cat if she gets too close. 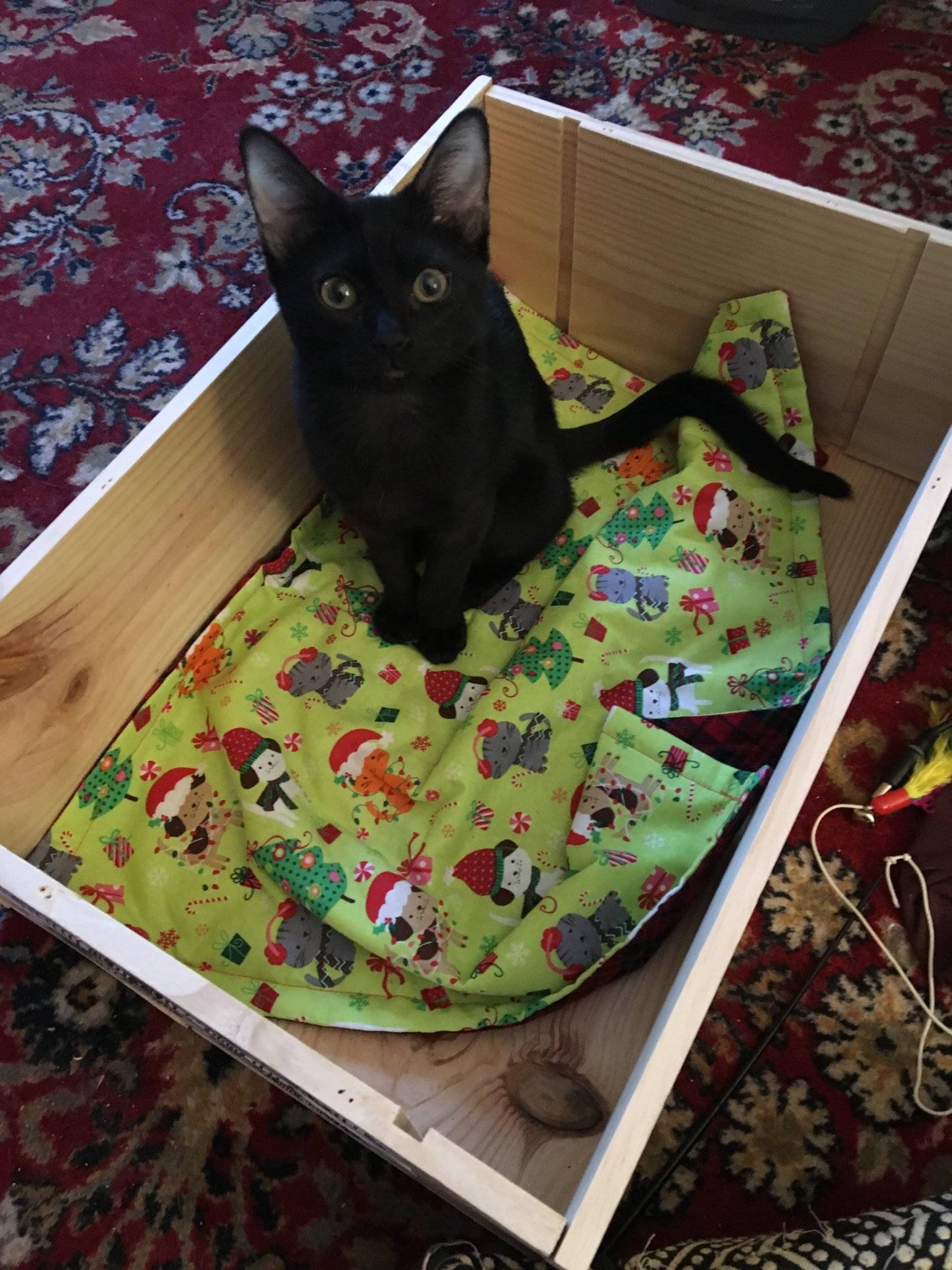 (Topaz was quickly adopted by a family after she got into the Adoption Center although I am a mush and could hardly wait for her to get out of there. As much as it saves cats, I hate seeing them cooped up in cages.)

Pearl is a purrsonality unlike any I’ve met before. She is active and energetic. She burns off all her calories. She sits with one hip up, one down, too engaged in staring at whatever she is staring at to employ proper cat posture. She jumps on my back off of whatever launching pad she can find, or climbs to my shoulders. This isn’t always comfortable and it’s often shocking to feel a cat-bat landing on my back as I wash a frying pan. I recently contacted The Acrocats and let them know I wanted to train Pearl to jump between two stools, and asked where to buy some (turns out almost any big box store has the kind with the round top.)

She murrrrps and meeps and expresses herself–often, before and during her jumping, she’ll make a sound. It’s like a mini weightlifter’s grunt, only this is Pearl throwing the weight of her whole body up on top of the bureau, or towards unsuspecting me.

Pearl doesn’t mind riding in the car and has taken four- to five-hour journeys with me.

She loves being pet but she’s so active that she will circle around while getting pets and then parade off to find the next most interesting thing. My fireplace mantel with its bevy of photographs and shells is no challenge, and many a moon snail shell has been batted to the ground. She is fascinated by water drops coming down the shower curtain and shower wall after I turn the water off. She can fit just about anywhere. She’ll attack a toy from inside the cat tree’s enclosed cave. If I “fly” an interactive toy over her head while she’s on the cat tree/cat tower, she will easily reach for it, mouth open, claws extended, back and forth with half of her body on a lower level and the top of her body emerging through the next level. 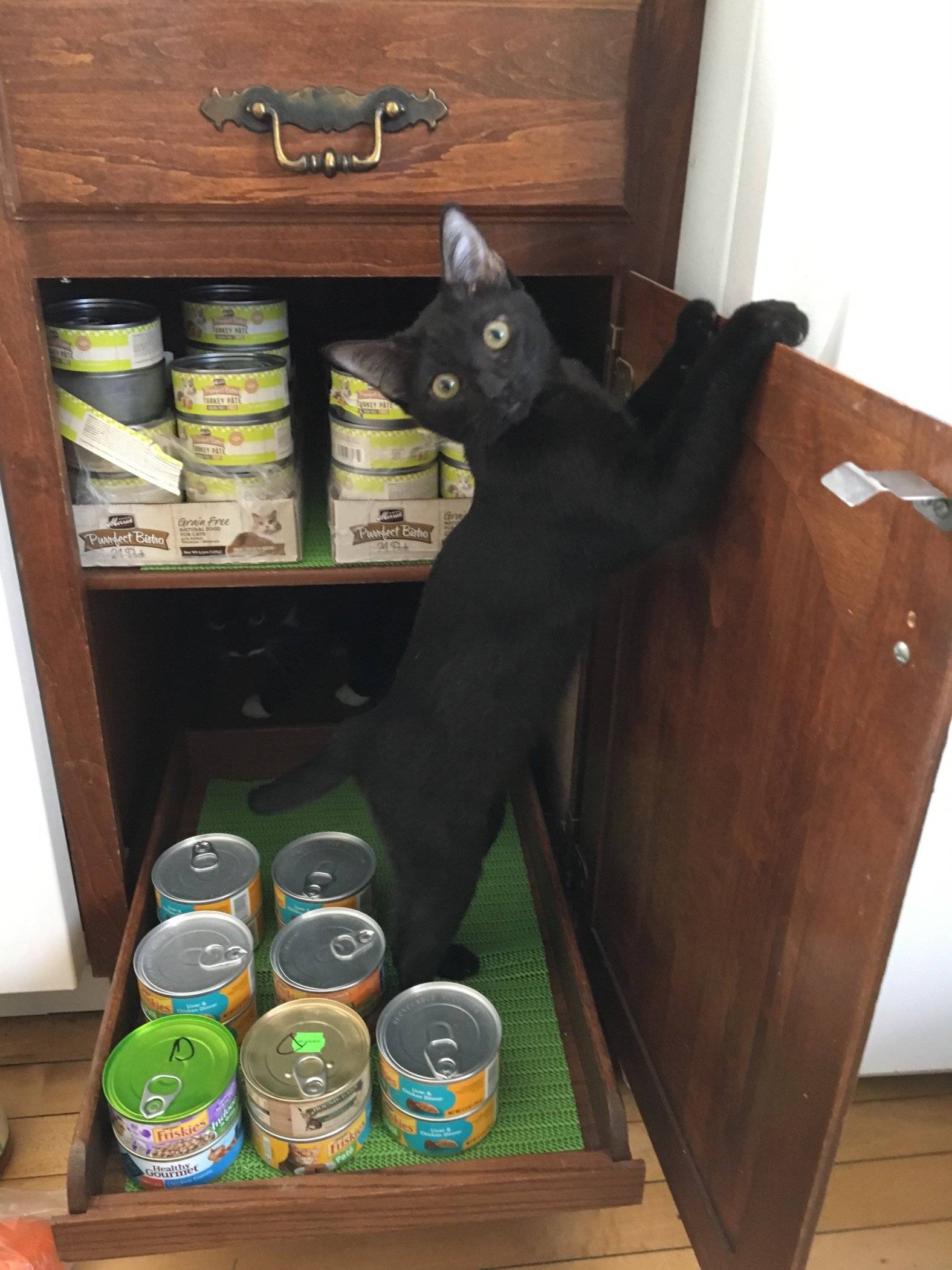 Lately, when I wake up in the morning, she realizes I’m conscious, and this makes her come over, get a few pets, and plop either next to my side or on my chest with her butt facing my face. Butt-face is a sign of trust: if she didn’t trust me she’d need to have her eyes on me so she could ward off an attack if needed.

Every cat has their own rituals with their humans and I look forward to playing with and petting Pearl and hope to find a mentor to help me train her, too. I’m so happy I adopted her. 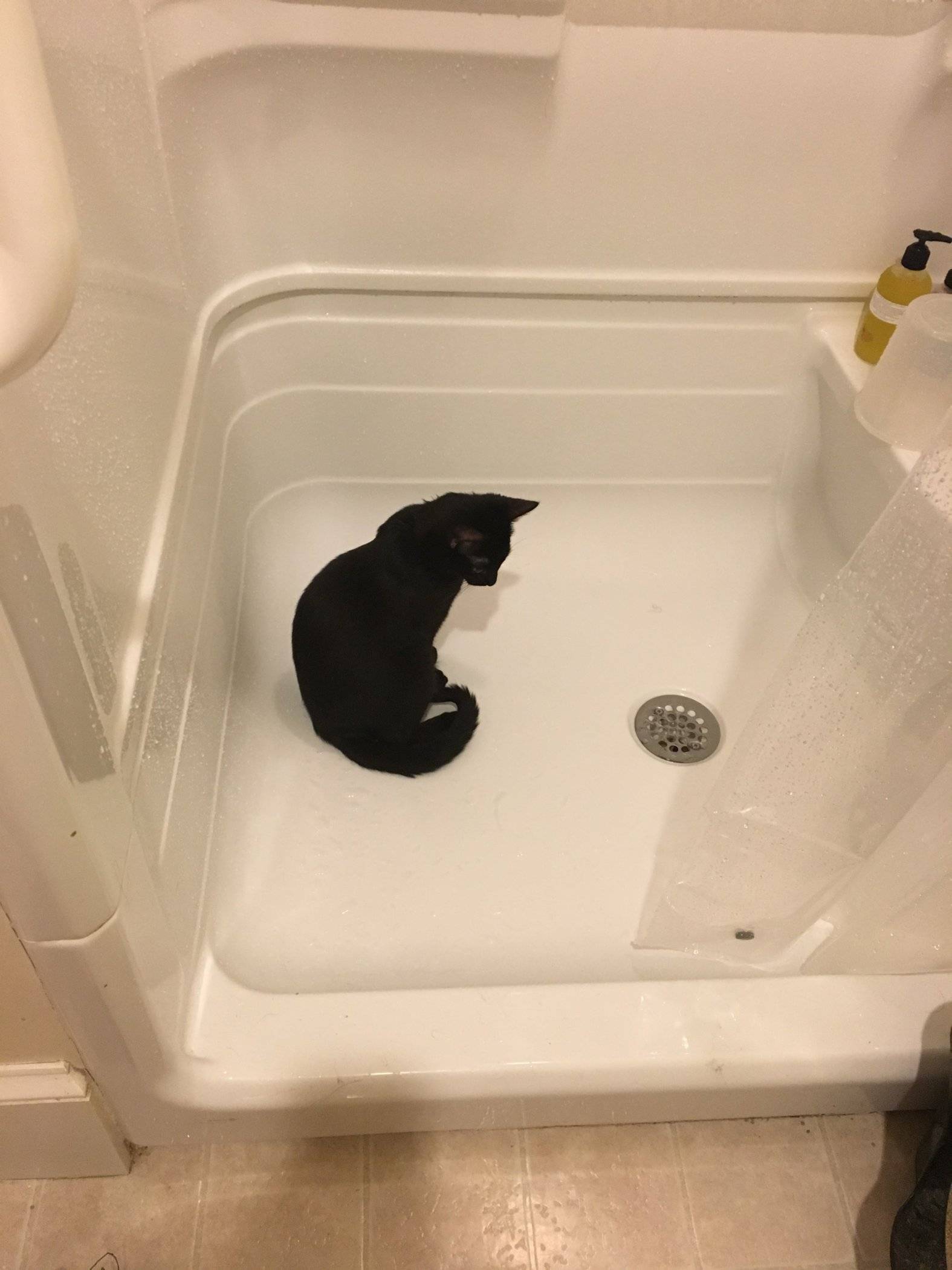