Today’s guest post comes from Anne S and is a story about her cat Sufi:

The Saga of Sufi

She found me as I was riding my bicycle home from work.

It was dark and raining but a warm Florida night.

I heard a little squeak as I rode by the neighborhood food stamp office. The squeak actually sounded like a desparate kitten “Mew”.

I had to stop to investigate because her cries were so pitiful. She was almost hidden in a hedge separating a hostile parking lot and a busy Orlando road.

I picked her up, she was so tiny she fit in my hand and I tucked her against my chest to ride with my remaining free arm to my home.

She squealed and then settled against my chest for the ride.

When I arrived home my 3 cats met me in the kitchen glaring at me with furious outrage. There was already a full house and the queen Audrey was not pleased.

Sufi, my new co-owner, came quickly ran up to Audrey. Audrey was a tabby similar to Sufi. Maybe Audrey resembled Sufi’s mother. But Audrey treated Sufi like an unwanted parasite.

Since Audrey, Eudora and Squidget already occupied my bed as I slept, Sufi went in the bathroom with a bowl of water and food.

She wailed in kitten cries so loud no one could sleep. The other cats were thoroughly disgusted with me and all the caterwauling. I walked into the bathroom and said emphatically, “What is wrong?”

Sufi let out a cheerful chirpy “mow” as of to say, “It’s lonely in here. I just want to be with everyone.”

Sliding to the floor I picked her up for cuddles and was instantly assaulted with rumbling purrs.

The other cats were outraged for a few weeks and I tried to find her another loving home. In desperation I called a coworker whose beloved companion kitty had died a few months ago. I let Sufi yowl into the phone as I explained, “Listen to her, she’s yelling, “Kim! Kim!” Indeed she

seemed to be saying, “Kim!”

My search for another home for Sufi was futile. Eventually the other cats settled down but regarded Sufi as low class and let her know her her status in the household.

Amazingly Audrey succumbed to her charms or her need for maternal attention.

Eventually Eudora and Squidget went to live with my mother. They were both good at rodent control. My parents lived in a large old wooden house.

Sufi screened my dates. She decided Paul was the one by joining us whenever we cuddled or kissed or…

Occasionally Audrey would become very neurotic and my sister would request a prolonged visit from Sufi to “get Audrey to start acting like a cat again.”

Eventually Sufi, Paul and I moved to a house on a lake near downtown Orlando. I found work in Alaska temporarily and Sufi decided Paul was the perfect Cat Daddy. My work in Alaska ended up being permanent and Paul got a job in Jacksonville. 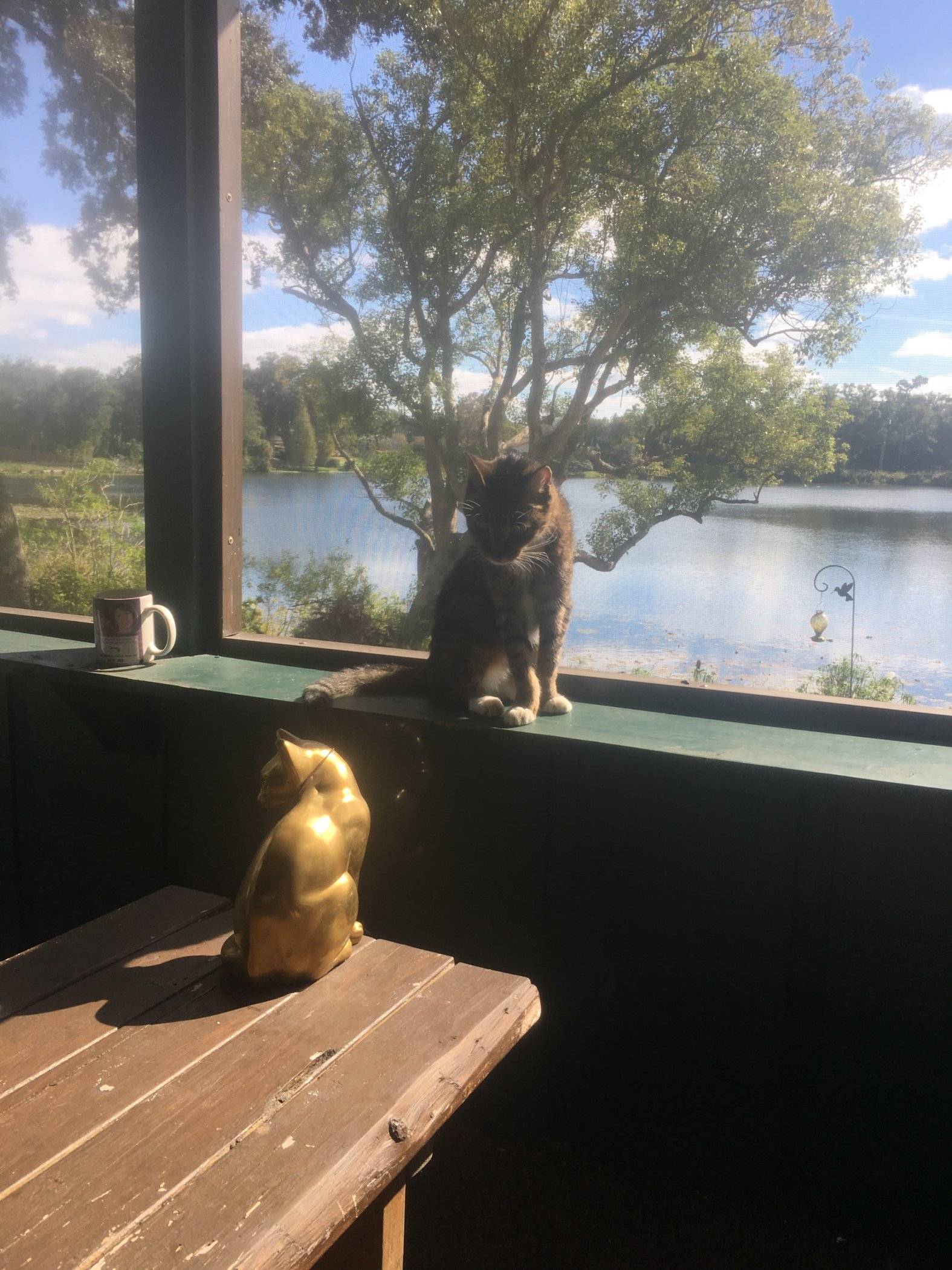 My brother moved into my house and Sufi adopted him as her new Cat Daddy. I wanted to bring Sufi up to live with me in Alaska and my brother said, “No. She is an old lady now and she’s happy to sleep in the house or the porch or run around the yard in the sun.”

I still visit her regularly. One time she was meowing in a demanding way. Her litter box was clean and she had her gourmet food available. “What does she want?” I asked my brother.

He shrugged then got up, picked up Sufi and carried her into his bedroom for a nap. He works from home and naps when he wants to. Sufi seems to dictate bedtime as well. 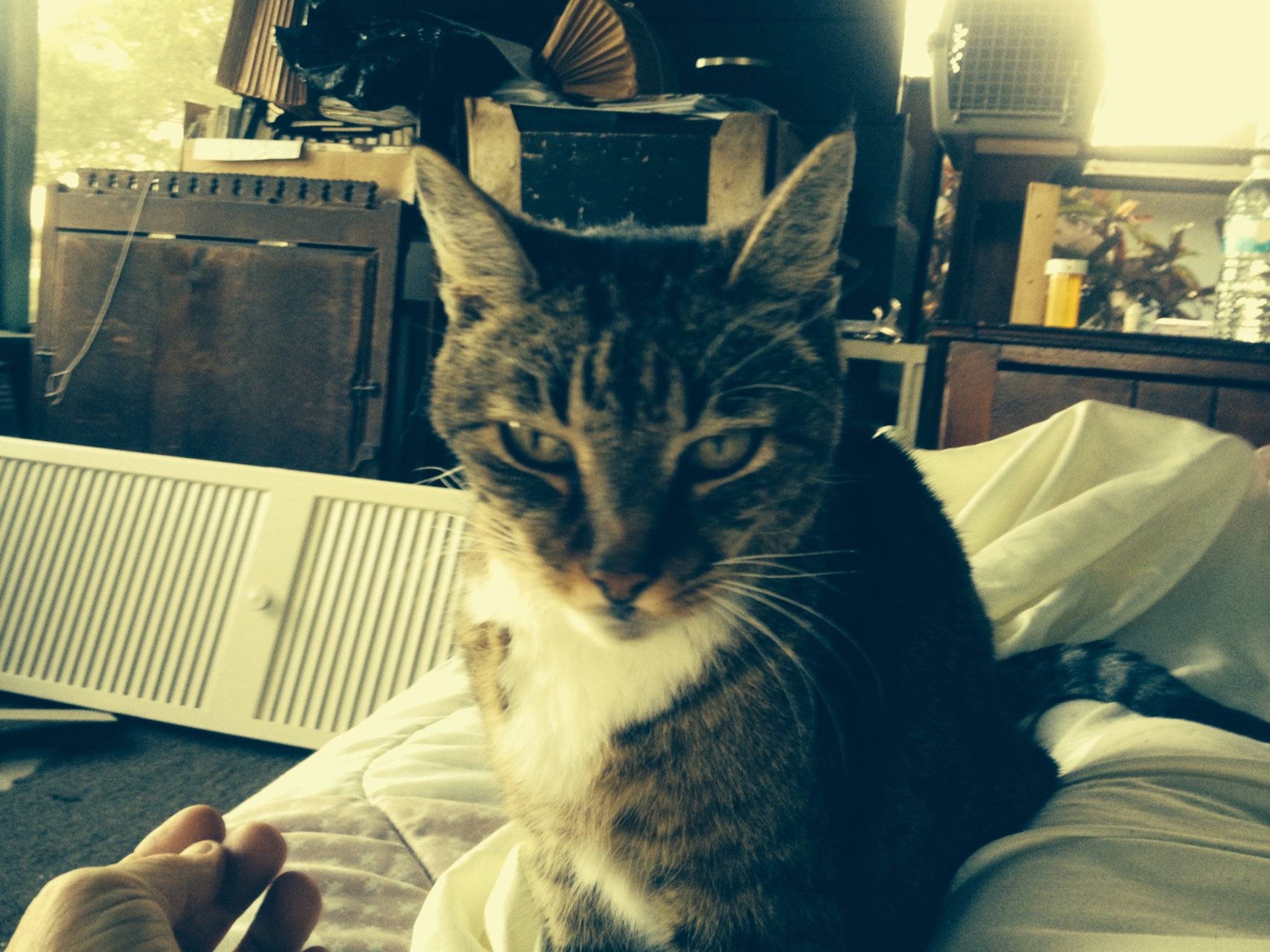 Sufi is 17 years old and still healthy. She spends time in the sun whereever it is available. Occasionally she gifts my brother with (dead) lizards.

I don’t get to see her as much as I would like to but she is happy and usually sweet to me. My brother says she has turned into a fashionista, eating only enough gourmet food to keep her girlish figure.

She takes her work seriously; sleeping in the sun, purring on laps, gracing deserving humans with love eyes, and spreads love to her world.

Have you or your cat got a story to tell? Email us today!

9 thoughts on “The Saga of Sufi”