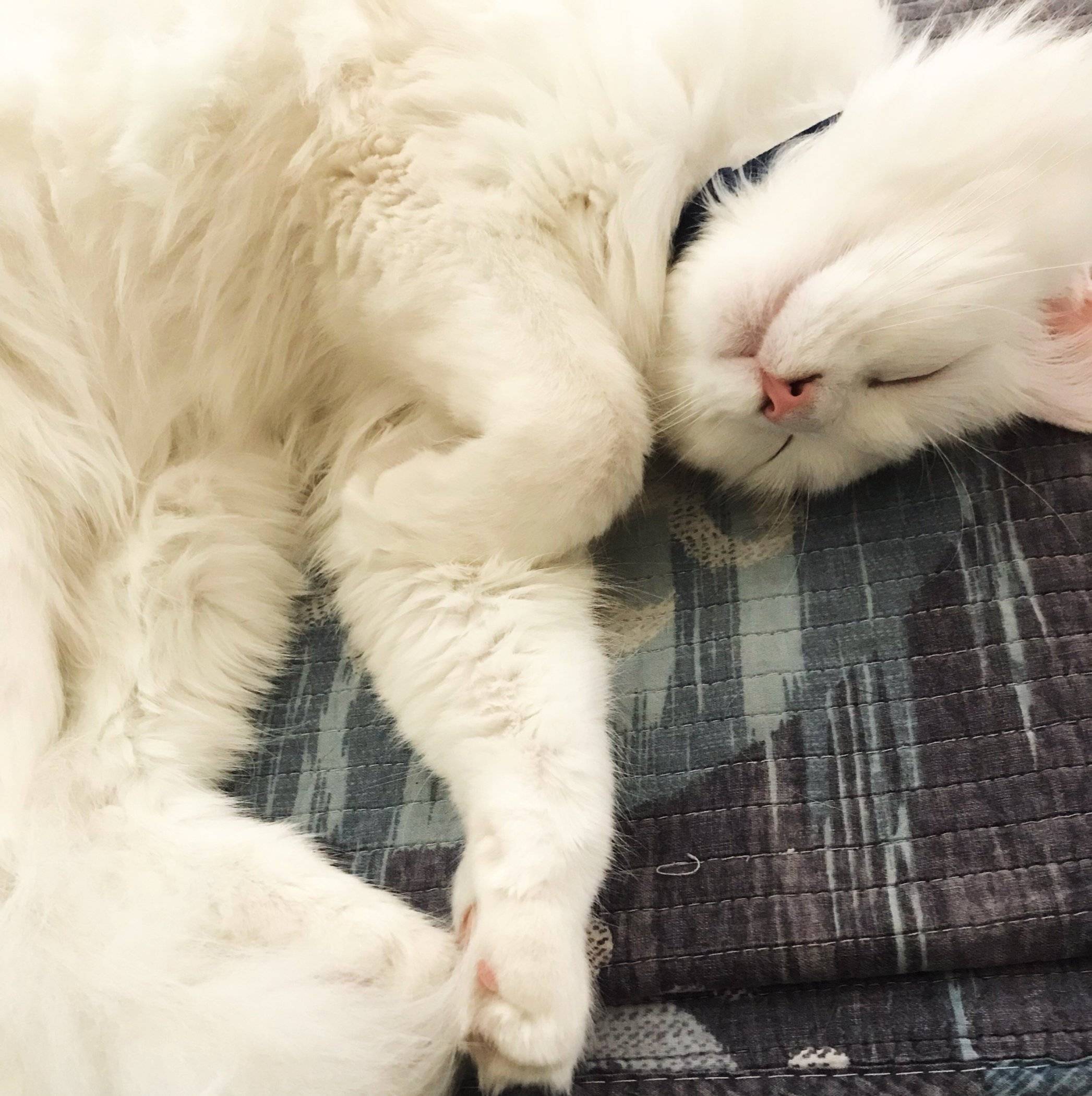 I’ve never been a cat person.  When I was about six years old, I desperately wanted a cat , but that desire was quickly squelched by my dad’s allergies.  All my adult life I have owned dogs and have loved identifying as a “dog person,” with the walkies, cool wet noses, muddy paws, and soft floppy ears.  Enter: Delilah.

Six months ago, while walking my two dogs, a fluffy white cat ambled out from some rose bushes and wanted to play with my two dogs.  I eased their leashes as they sniffed at her with curiosity, and she promptly flopped over and tried to bat at them with a paw.  One excited lunge too many, though, and she backed off a bit, so I tugged on the dogs’ leashes and we headed on our way.  I realized about five houses down that this little floof was, in fact, following us.  The dogs strained at their leashes, wagging furiously, as I paused and watched her amble right back up to them.  This time Oliver and Bailey were even more excited, and soon their gregariousness had her running across the street to watch us from a safe distance.  On with our walk we went, but to my surprise, she again followed.  Back to our side of the street.  Around the corner.  Across many lawns.  Behind bushes.  Around another corner.  Down our street.

When we got home I ushered the pups inside.  A short moment later, I heard yowls coming from our patio.  I opened the door to find an insistent kitty, and the dogs spilled outside, eager to sniff at their “guest.”  After some paw swipes from the outside of the fence the cat decided she was ready for more, and slipped through the slats .  Cue three fur balls charging around our patio together.  When I opened the door to finally let the dogs back in, imagine my surprise when a fluffy white streak preceded the two dogs through the door!  All of a sudden I had a cat galloping playfully through the house, two dogs in hot pursuit through the bedroom, down the hall, into and out of the kitchen, under the couches, over a chair, and under the dining room table.  I texted a friend in helpless alarm.  Uh, I have a cat in my house!  What do I do?!  I reopened the door and let the three-animal bedlam spill back outside, explained patiently to the cat that it was time to go home, and lifted her out of the doorway so the dogs could be herded inside.

Netflix was my main agenda item for the rest of the evening.  Except I heard persistent meowing coming from the patio door for the next couple hours.  I posted a quick snap to our neighborhood message board, thinking someone would like to know where their cat was.  Then, when my curiosity got the best of me, I opened the door an inch or so and tried to peek outside.  This is how my husband found me when he got home.

By this time kitty had abandoned her attempts at getting in the patio door, and had started to wind around my husband’s ankles.  She prettily batted at his key lanyard as he tried to figure out what I meant by a problem and simultaneously leaned down to pet her, while I explained the evening’s antics.

“She’s probably hungry,” he replied finally.  He opened the front door to go inside, and she ran in ahead of him gleefully.  We laughed, and as he put his things down, he offered to go to the grocery store to get some cat food “just for tonight.” 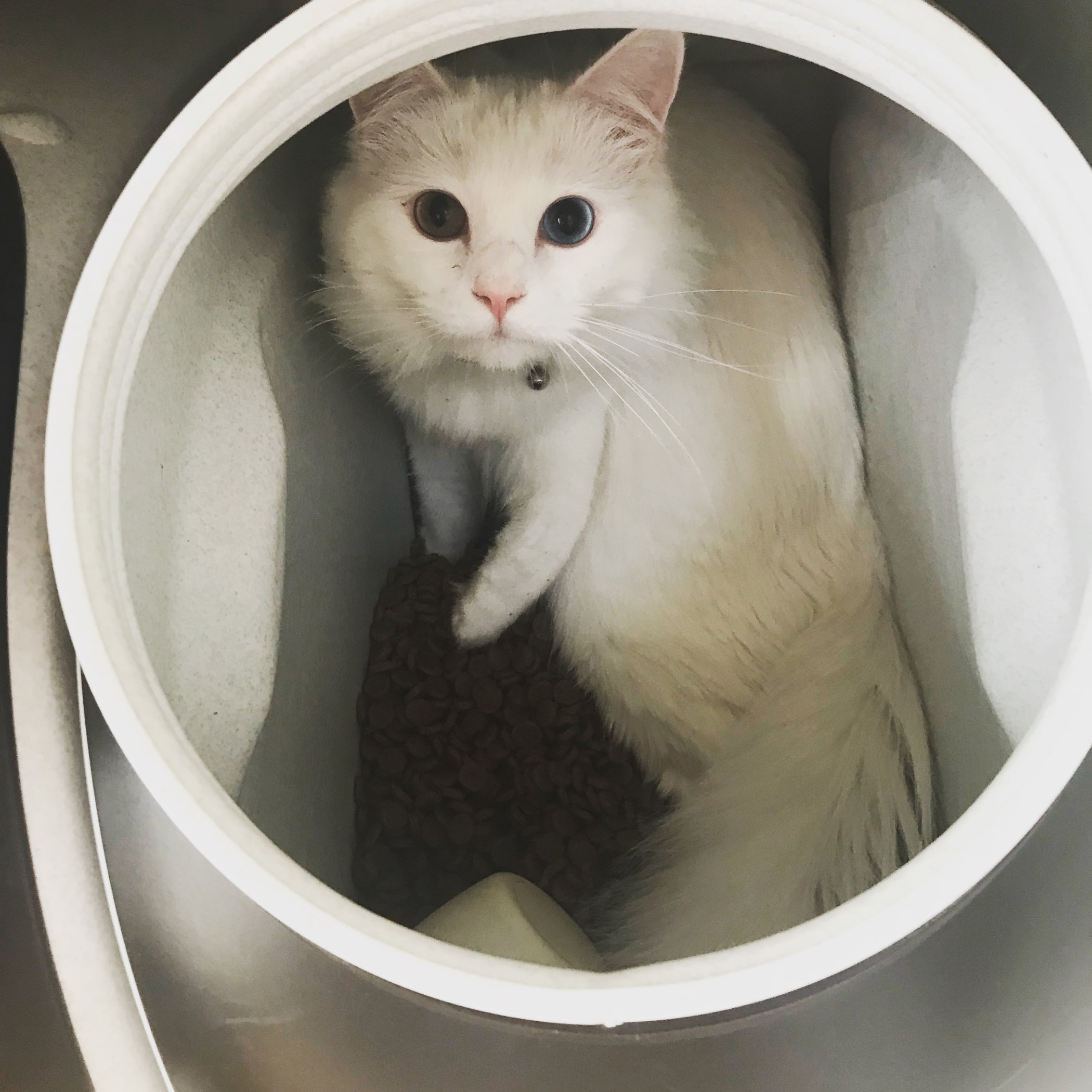 Six months later, she rules our household (or at least, she thinks she does).  She made up her mind that day that we were hers, moved in, and has not left since.  Delilah is a floof queen, an adorable monster, and a happy addition to our household.  Nine small pounds of cat have made my husband and I hopeless cat converts, and I don’t see us ever going back.  Thank you, Delilah, for adopting us.

For more of Delilah and her dog brothers, you can find her on Instagram @lifeofdelilahcat.  Alternatively, you can read her human mom’s blog posts at www.pinkgreenmusings.com.