For some of us this surely must be a dream… to propose to your partner in a cat cafe!

That’s what it must have been like for the two volunteers of Pause Cat Cafe in Bournemouth.

Pause Cat Cafe is a non-profit cafe in Bournemouth that is home to 12 rescue cats, offering a relaxed environment for cats and people to enjoy each other’s company.  The cafe promotes animal welfare, ethical eating, volunteering and community projects and relies on the help of volunteers.

The cat cafe volunteers, now both 22, came to Bournemouth separately for University in 2015; Hazel was studying Archaeology, Anthropology and Forensic Sciences and Stephen was studying Archaeology. Their eyes met across trowels and mud in an archaeological dig in their first year, they shared some lectures and started dating in the November afterwards.

Hazel started volunteering at Pause Cat Cafe in October 2017 and has tried her hand at every aspect of the cafe, from waitressing and making coffees to cheffing, but her real passion is looking after the cats and she now supports and trains the other volunteers to provide the best possible care for the rescue cats. Stephen started spending time at the cafe with Hazel and soon fell in love with the cats too, officially joining as a volunteer at the start of 2018.

It seemed purrfect for Stephen to propose in the cafe as it has been such a big part of the couple’s lives during their time in Bournemouth, both have remained in the town since graduating saying they can’t bear to leave the cats yet.

The rescue cats who live in the cafe are attended to 24-7, with volunteers taking it in turns to stay overnight with them.  Hazel and Stephen stay one night a week and Stephen chose this weekend to pop the question, although he has had the ring for a while and had been thinking about the best way to make the ‘pawposal’.

Petrus is a cute grey tabby who was handed into Spring Corner Vets as a kitten, he was in poor health with a skin condition. He’d scratched most of his fur off and was very skinny.  Spring Corner nursed him back to health and asked Pause to take him in.  Petrus and Hazel have a strong bond and love spending time together. 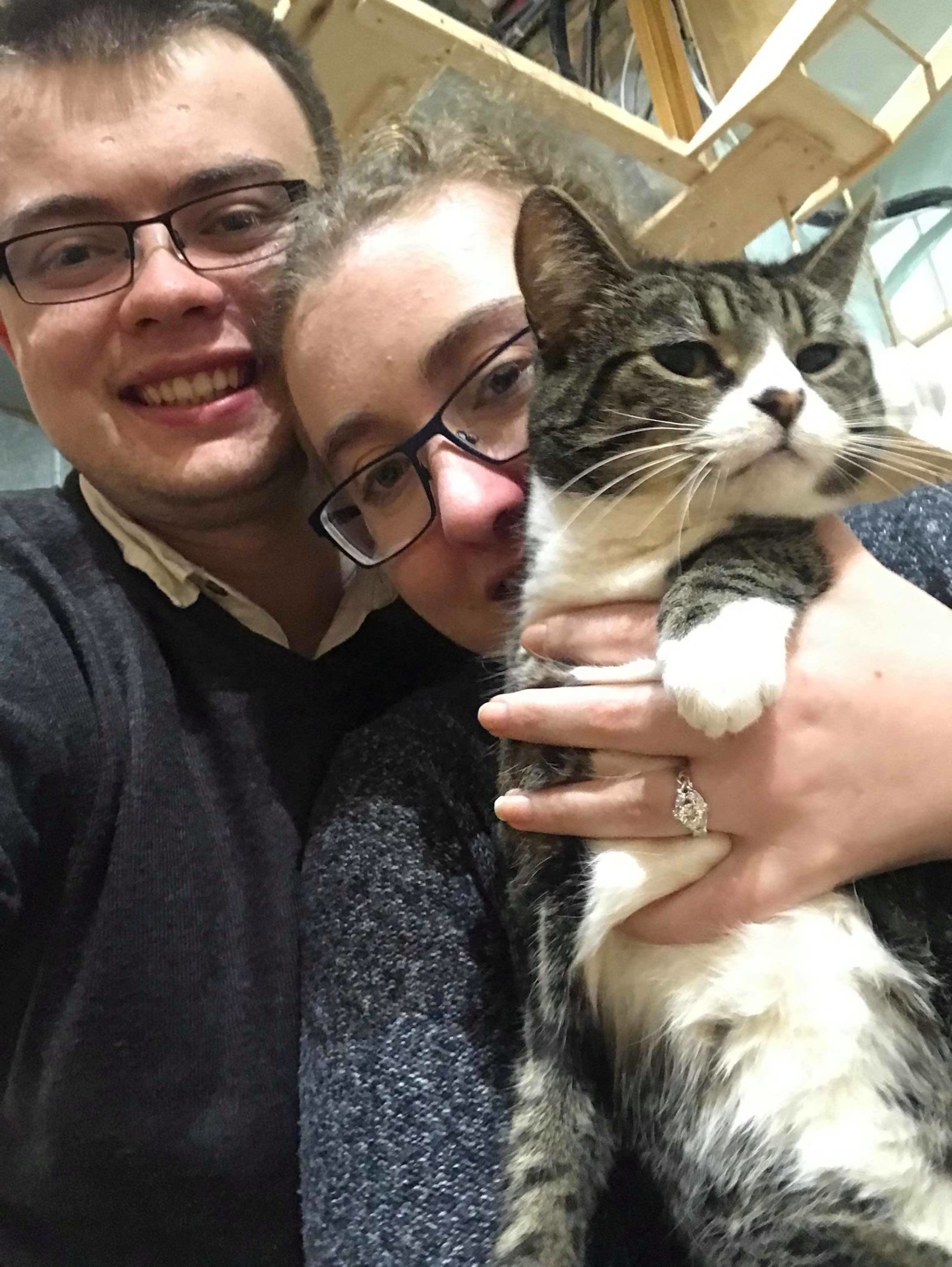 “Petrus is my favourite, but don’t tell the other 11!” says Hazel

Initially, Stephen had planned to attach the ring around a collar on Petrus’ neck, but the cats in the cafe do not usually wear collars and as Petrus was stray, he’s not used to wearing a collar. Stephen knows the cats well and could tell that Petrus wasn’t keen, he didn’t want to cause Petrus any distress so he had to rethink his approach.

Each cat has their own individual bedroom at the cafe, protected by microchipped cat flaps. This enables them to get away from visitors or other cats whenever they want some me-ow time.   Stephen waited for Petrus to retire to his bedroom, placed the ring box alongside Petrus and asked Hazel to check on her favourite cat. Luckily she found the box right away and Stephen got down on one knee to ask for her hand in meowage.

“It was the most purrfect proposal and I am so unbelievably happy!” says Hazel

“Petrus gave us so much attention all night and refused to leave us alone after Stephen proposed.”

Hazel continues “Soon all the cats cottoned on that we were so excited so they became super excited but didn’t know why. We had hyper cats for about an hour!” 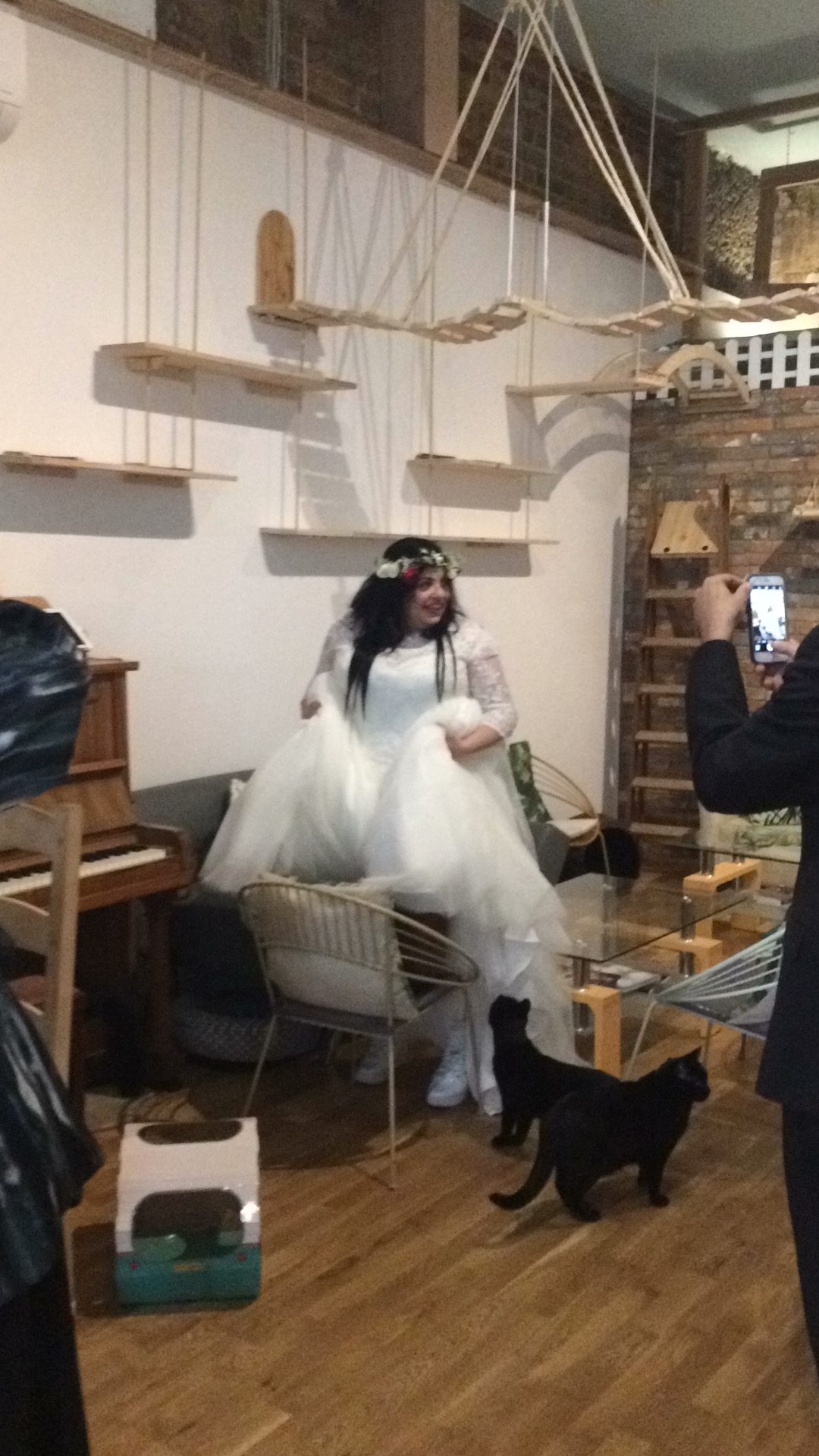 This isn’t the first time the cats have been involved in ‘meowage’ festivities, as a couple came to visit on their wedding day last summer.

11 thoughts on “Who Wouldn’t Want to Get Engaged in a Cat Cafe?”