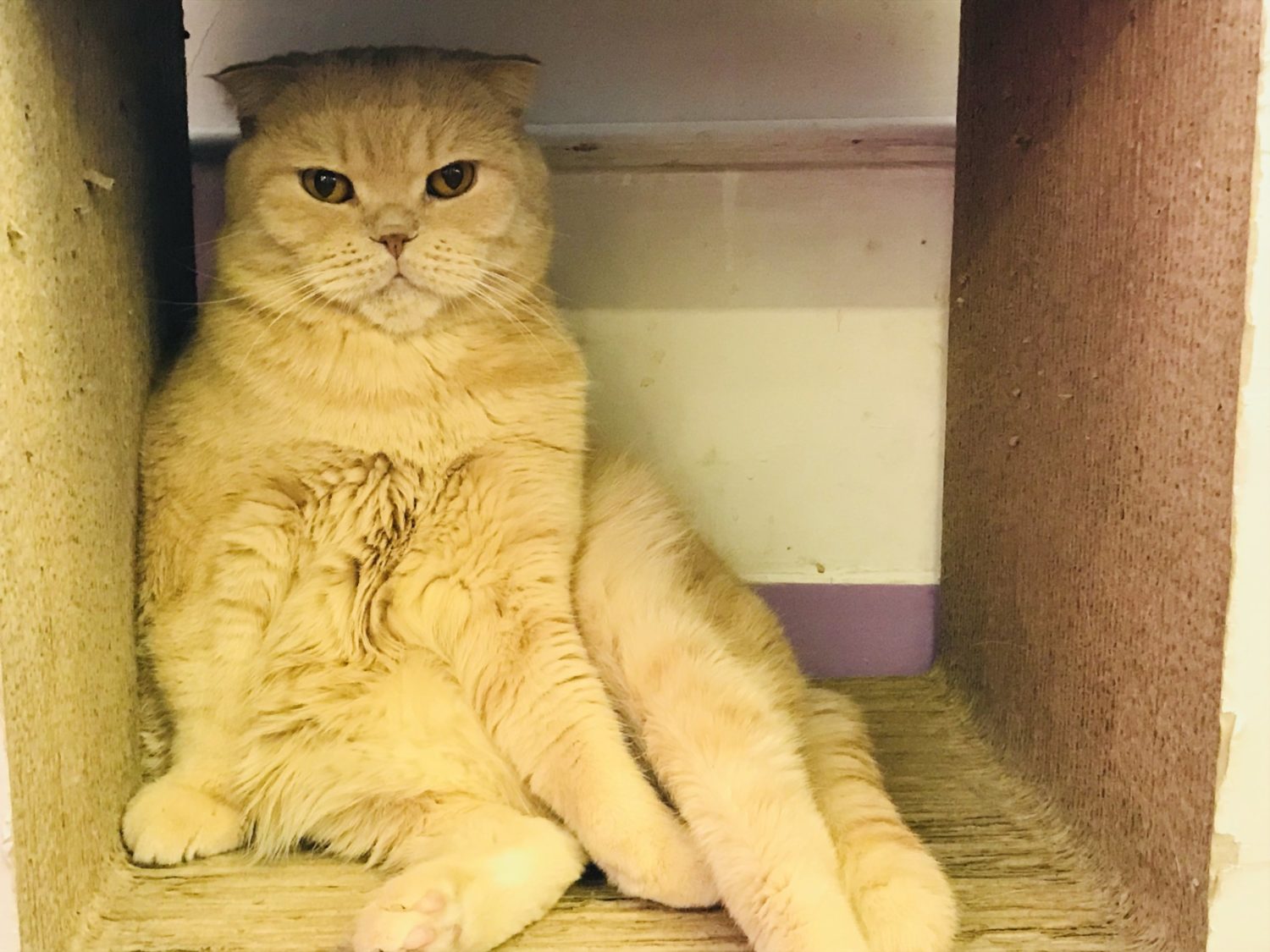 Hong Kong is one of the most exciting international cities in the world.  Despite the energy-sapping heat and humidity, it teems with vitality, from ultramodern Hong Kong Island and its architectural skyline to mysterious Kowloon with its lively neighborhoods and street markets.

Hong Kong is distinctly Chinese, but feels more global with a large expat population and British colonial era infrastructure.  But the melting pot of crowds and hot climate aren’t the only reasons Hong Kong gets your pulse racing.  Now, you can add cat cafes to the list.

Just like the city, these feline emporiums are diverse and often crowded- full of people, cats and unexpected discoveries.

The Neighbor’s Cat visited eight Hong Kong cat cafes in May, 2018 and I have profiled five of the best.  One word of note if you visit Hong Kong (or China) seeking out cat cafes.  They often close without notice, so double check Google (or The Neighbor’s Cat) before making the trek. 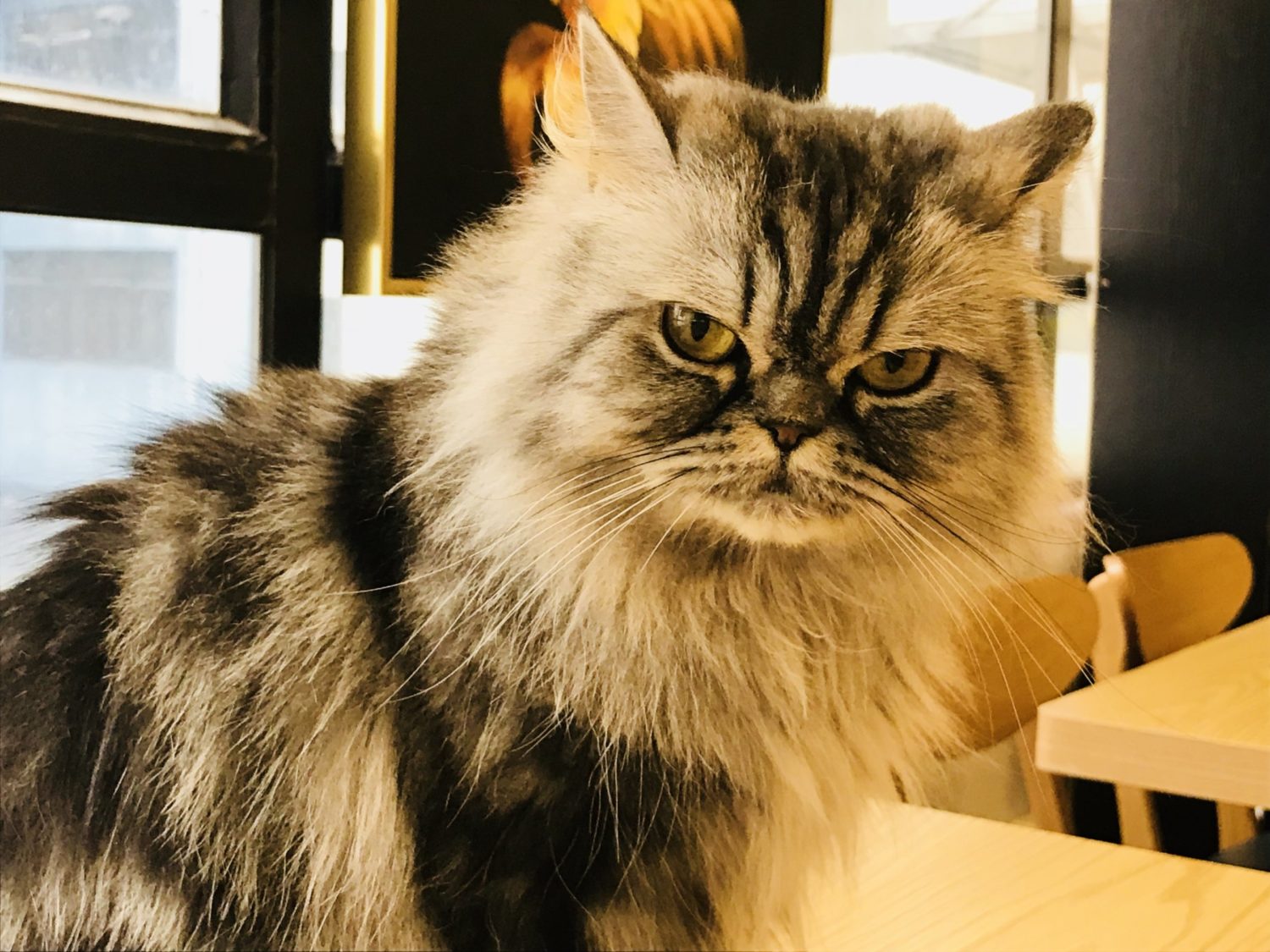 Located in the frenetic Mongkok neighborhood, Cafe de Kitten serves as a welcoming escape.  Serene, bright and clean with friendly staff and memorable felines, it stands out among the best cat cafes in the city.  In fact, it was my favorite.

After exiting Mong Kok metro station, I battled my way through a gauntlet of people on main thoroughfare Nathan Road before turning onto Sai Yeung Choi Street and Pakpolee Commercial Centre, located behind Sino Centre (a mall famed for anime merchandise).  I caught my breath while waiting in line for the elevator (tip: stand on the left side) to the 14th floor.

Despite the crazy street scene below, it was quiet Monday afternoon when I entered the cafe.  I was greeted at the counter by friendly college age host who explained the minimum order requirements.  After ordering a floral green tea, I was seated in the main cafe area.

There were six cats on the premises, most with pedigreed backgrounds.  I later discovered I was in the presence of two Hong Kong cat celebrities, as Egg Yolk and Pineapple Bun have starred in various commercials and print ads.

Even before I was given the scoop, I definitely picked up the vibe that these were not your typical felines.  Pineapple Bun, a brown tabby Persian, hopped up on a table near me and stared intently, as though studying my features.  Across the room, I did a double take as Egg Yolk,  a cream colored Scottish Fold, posed in a curiously languid position while gazing at me with piercing golden eyes.

His name also inspired a list of the coolest cat names from cat cafes around the world.

It’s rare to experience so many strong personalities at a cat cafe, a testament to the love and care lavished upon these posh pussycats.  These were extroverted kitties- active, inquisitive and smart.

The cats are the stars here, and reason alone to visit, but the lovely tea service, friendly staff and pleasing space make a visit to Cafe de Kitten an absolutely unforgettable experience. 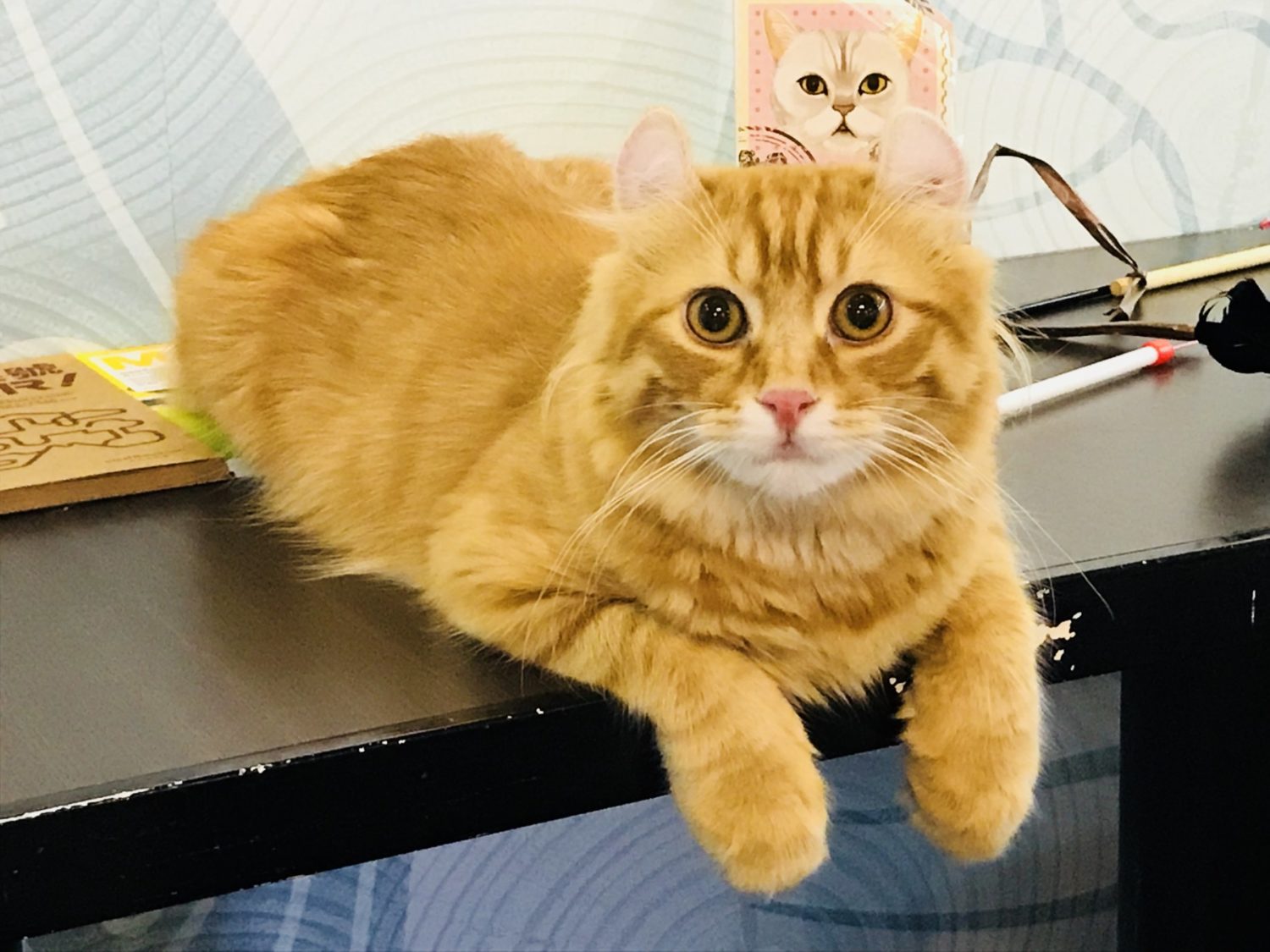 Located in the same building (Pakpolee Commerical Centre) as Cafe de Kitten, it’s incredible luck that both are such fine cafes.  The vibe has more of a proper restaurant feel than cat cafe, but with seven spunky cats, Cafe Idea is no slouch in the feline department.

It was a busy Saturday when I visited and after standing in a very long line, found the stairs to the fifth floor.  Hint:  If you don’t want to climb the stairs, there are two elevator banks with the left side for higher floors and right side for the lower.  Stand on the right side for Cafe Idea. 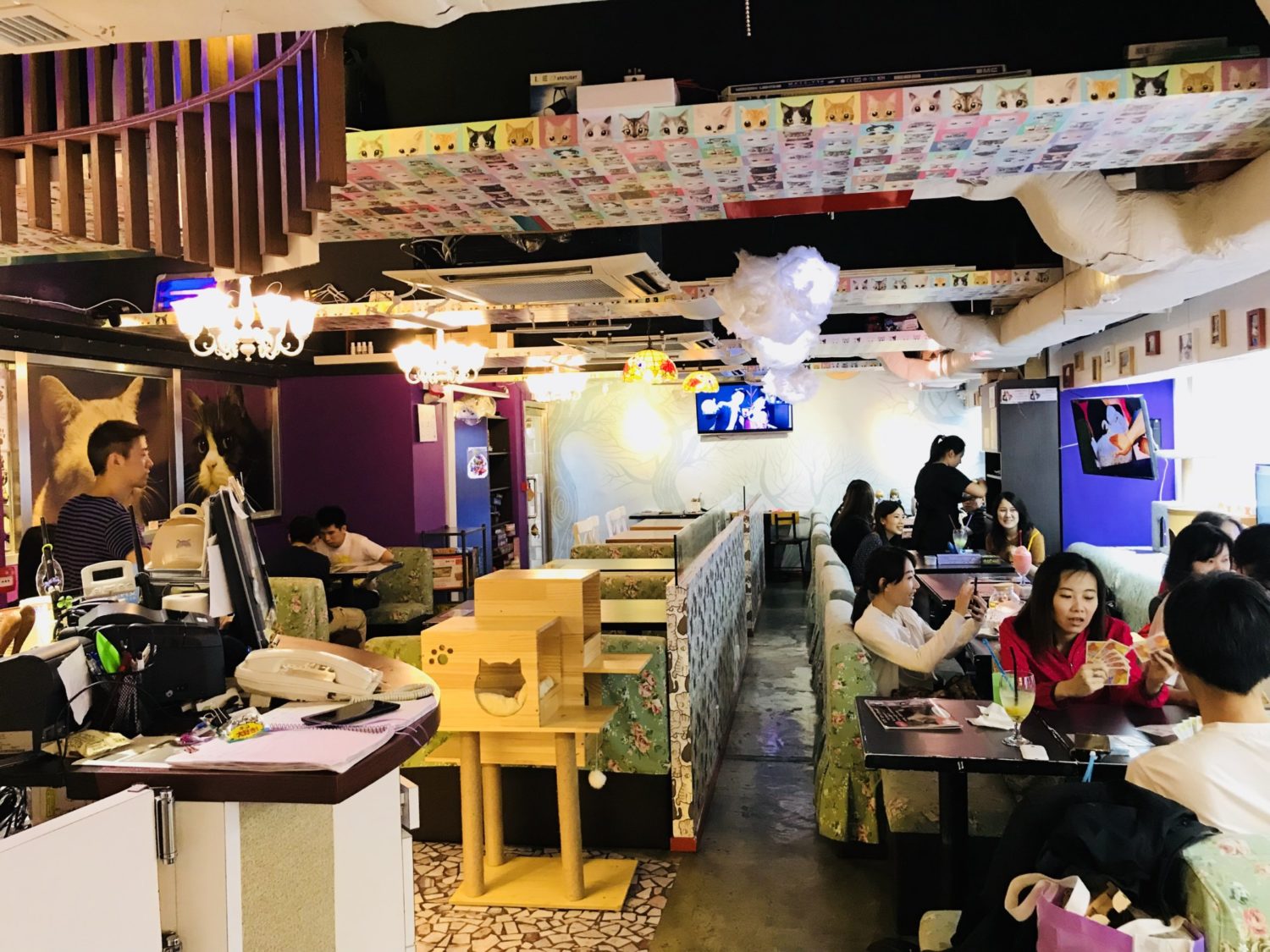 I was promptly greeted and after pondering the menu (there is a minimum spend requirement) ordered a frozen strawberry smoothie with a texture more like a daiquiri like than milkshake.  There are many fine food selections to be had, including appetizers, salads, pasta & rice dishes, as well as lots of desserts and ice cream specialties.

A few sips later I turned my attention to the cats, a combination of American Curls and British Shorthairs.  The cafe started with three cats, the owner’s original crew from home, and has grown to seven.

My favorite was Silo, a rambunctious ginger Curl who entertained the cafe with his run-around antics and Dow Dow, a curious silver shaded British Shorthair who perched near my shoulder inside a wicker basket-type tower.

While snapping photos, I was able to visit with the friendly owner and staff in English, which I greatly appreciated.  They were able to tell me stories about the cafe and the cats.  Turns out they are a real hub for cat lovers and unlike most cat cafes, allow you to bring your own cats to the cafe for special events, such as birthday parties.

The cafe space is clean and colorful with bright walls and cat-themed accents and the day I visited, the atmosphere was quite jovial with most patrons smiling, laughing, visiting or playing cards as the cats frolicked nearby.

I found my visit to be exceptionally pleasing and highly recommend a stop when in Hong Kong. 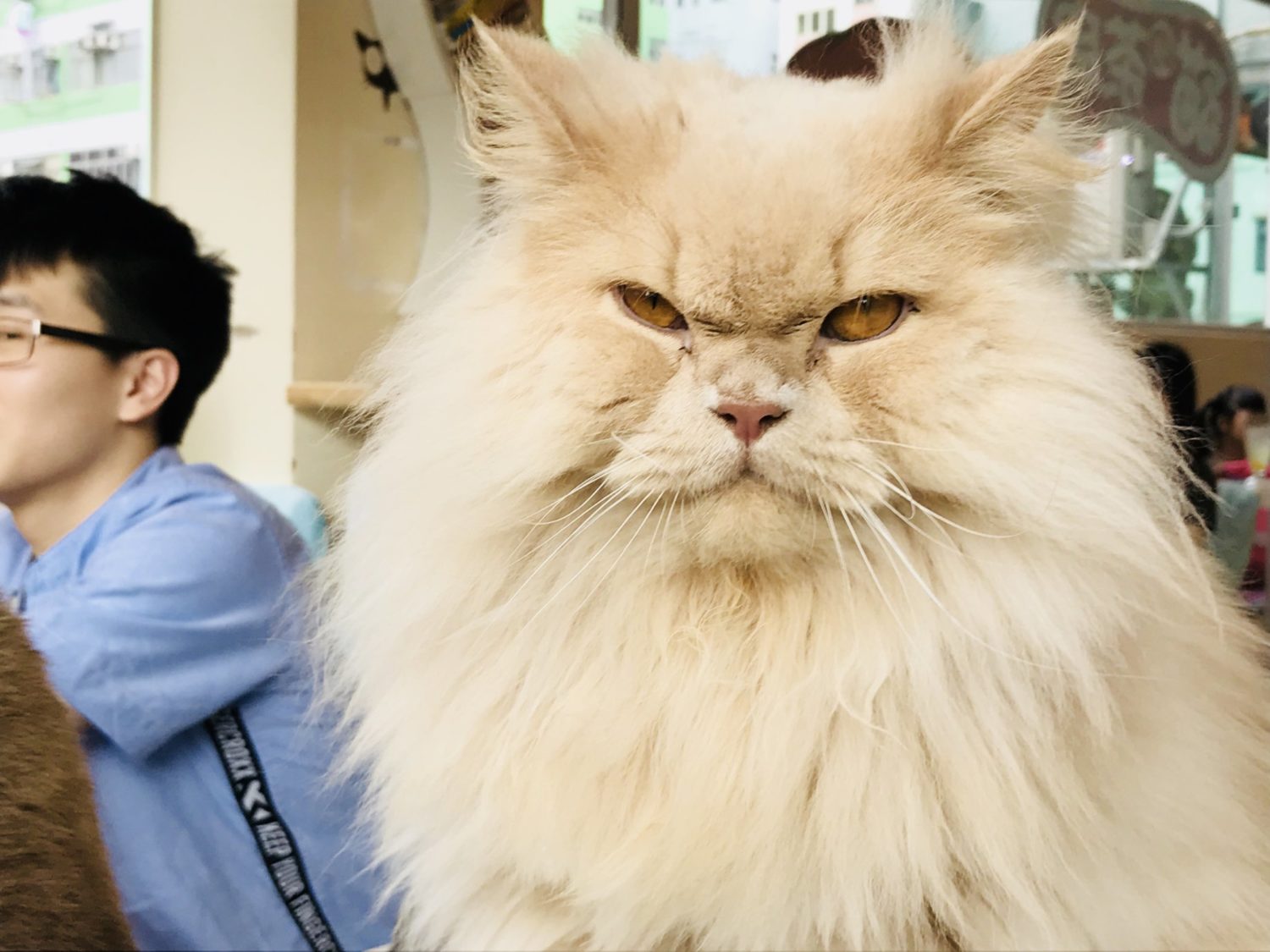 Located a bit outside Kowloon in Tsuen Wan neighborhood, at the end of the red line, The Cats Tea Room is worth the travel effort.

First, there are SO many beautiful cats.  I counted over thirty, and while that would normally cause me a bit of concern, the space is so large that it seemingly did not affect the equilibrium.  The space is set up to encourage the kitties to engage with you with plenty of small, low tables on the floor with pillows to sit on. 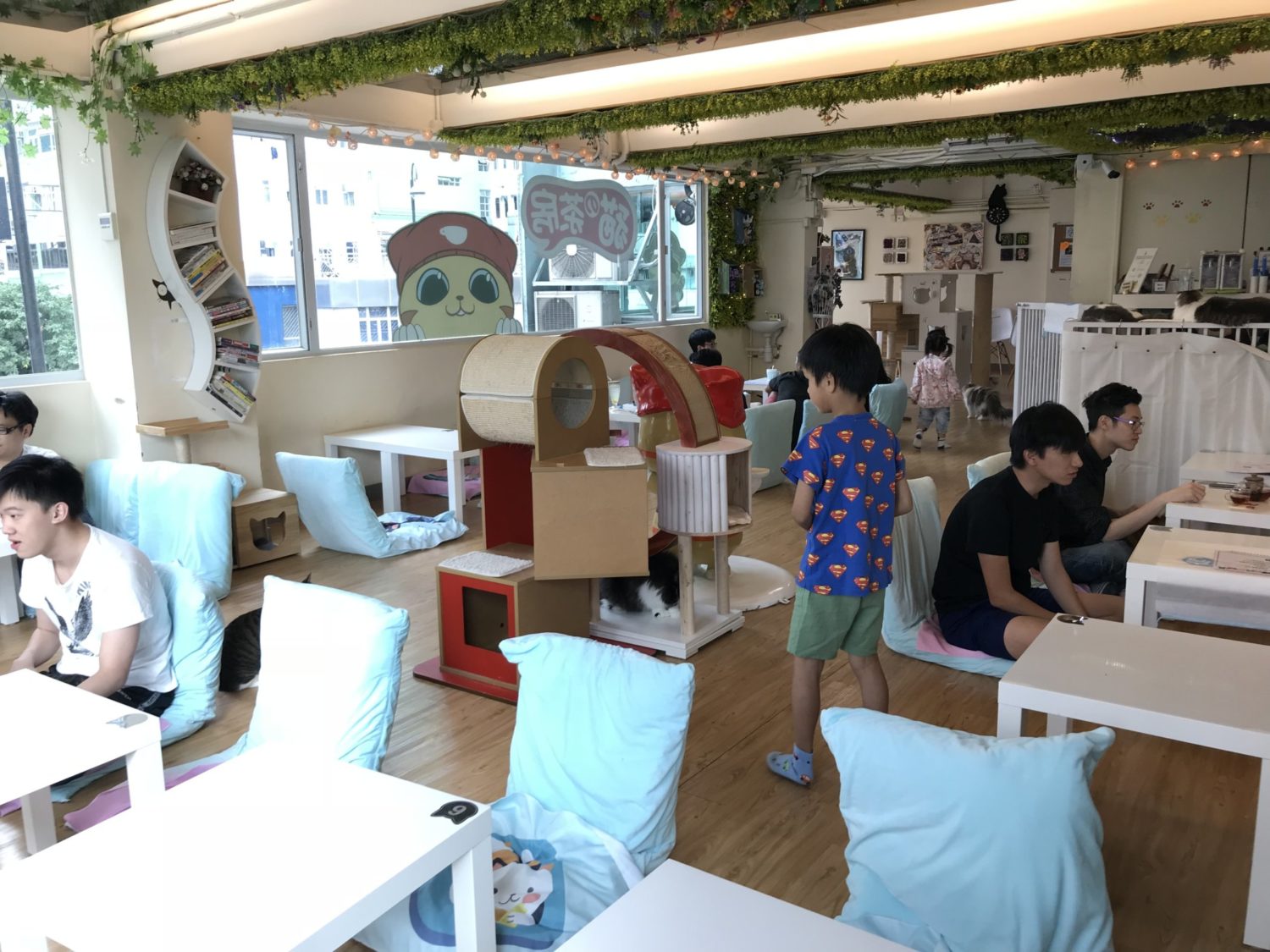 The food service was decent and so is the room, which isn’t posh, but is bright and clean save for a hint of cattiness.   My advice is to come here strictly for the cats.  With all breeds and personalities in attendance, you are certain to find a favorite.  Mine was a blue-eyed Siamese with the sweetest temperament, but I also fell in love with cream colored Maine Coon that was so big, I thought he had a bit of a recessive lion gene going on.

Some cats were not particularly social, but most were affectionate with some even climbing into the laps of patrons, to their delight.

I would like to give a shout-out to the staff, who are friendly, and the day I visited, so were the patrons.  We shared goofy grins and took turns taking each others photos, including one sweet little girl with her mother.  She appeared to be about 2 or 3 years old and she had mittens on her hands which were meant to keep her interactions with the cats (like my little Siamese buddy) gentle.  Genius! 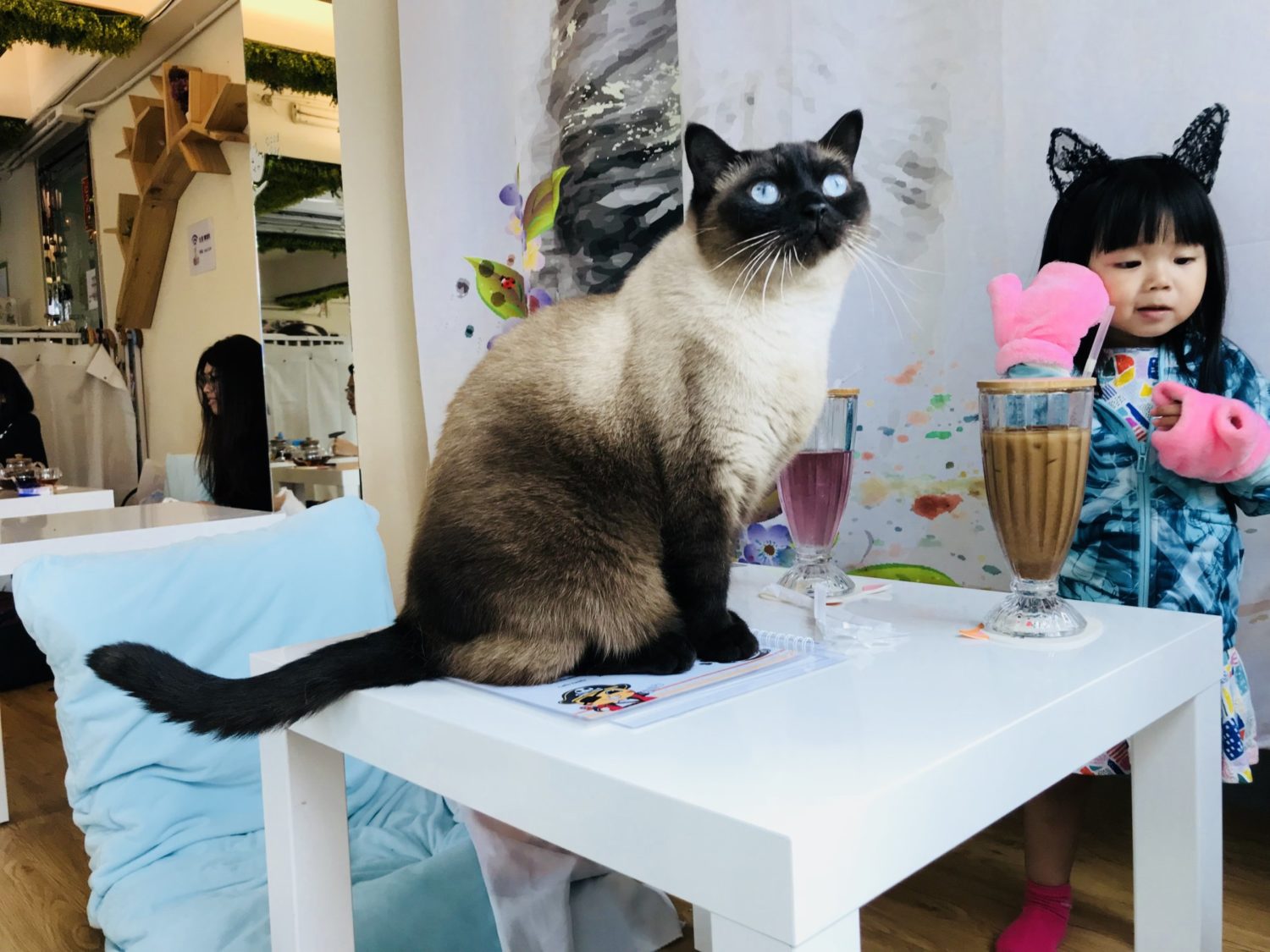 The cafe also has partnered with the Stray Cat Home Association and appears to have some rescues in permanent residence.  They also promote rescue and adoption with patrons, which is not common in Hong Kong.  Only one other cat cafe, Plum Cats featured rescue cats and promoted adoption.

Consider supporting these cat cafes for the good work they do in promoting animal welfare as well as having a great time with the kitties! 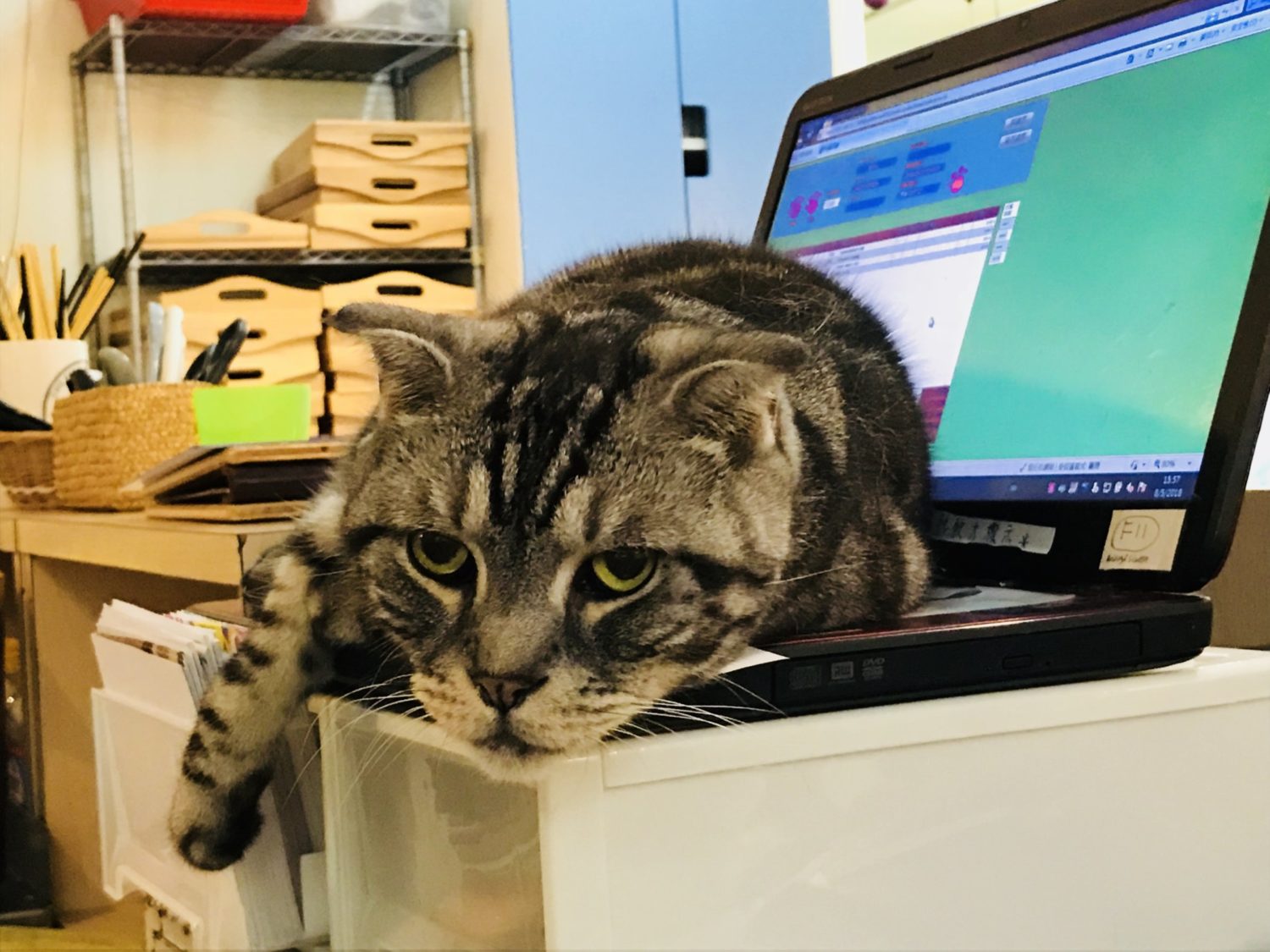 One of the oldest cat cafes in the world, Cat Island Cafe (formerly Ah Meow Cat Cafe and Cat Store) has been in existence 18 years.

The location was a bit difficult to find (Po Ming Building, same as Mr & Mrs Cat Cafe) but once inside, we were treated to warm and personable service.  It was late afternoon, normal kitty nap time and only one cat was awake, glancing at us warily as he roamed the room, seemingly aware of the longing stares directed at him.  My partner and I decided to focus on our coffee drinks and catch up on our sightseeing plans for the balance of our Hong Kong trip. 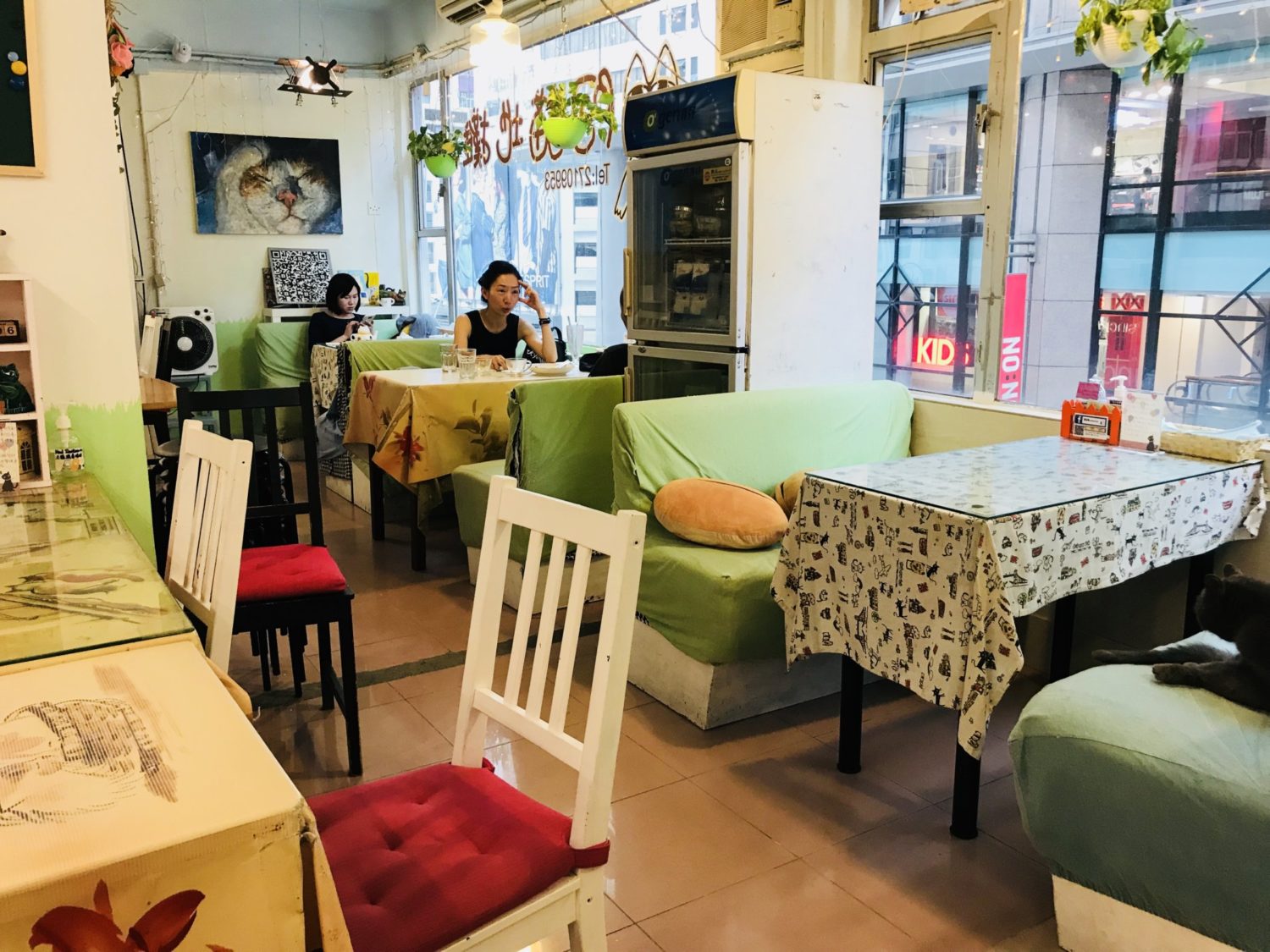 It was pleasantly busy at the cafe, a diverse mix of tourists and locals.  In the corner, a couple was having an intense conversation.  Next to us sat a group of German ladies enjoying a cheerful catch up along with coffee and cake, while cross the aisle, two young teenagers sipped milkshakes and tried to coax the awake British Blue in their direction.

The cafe was comfortable and cheerful, but I particularly enjoyed my coffee, which was better than average for Hong Kong cat cafes.

All in all, a great choice when visiting Hong Kong. 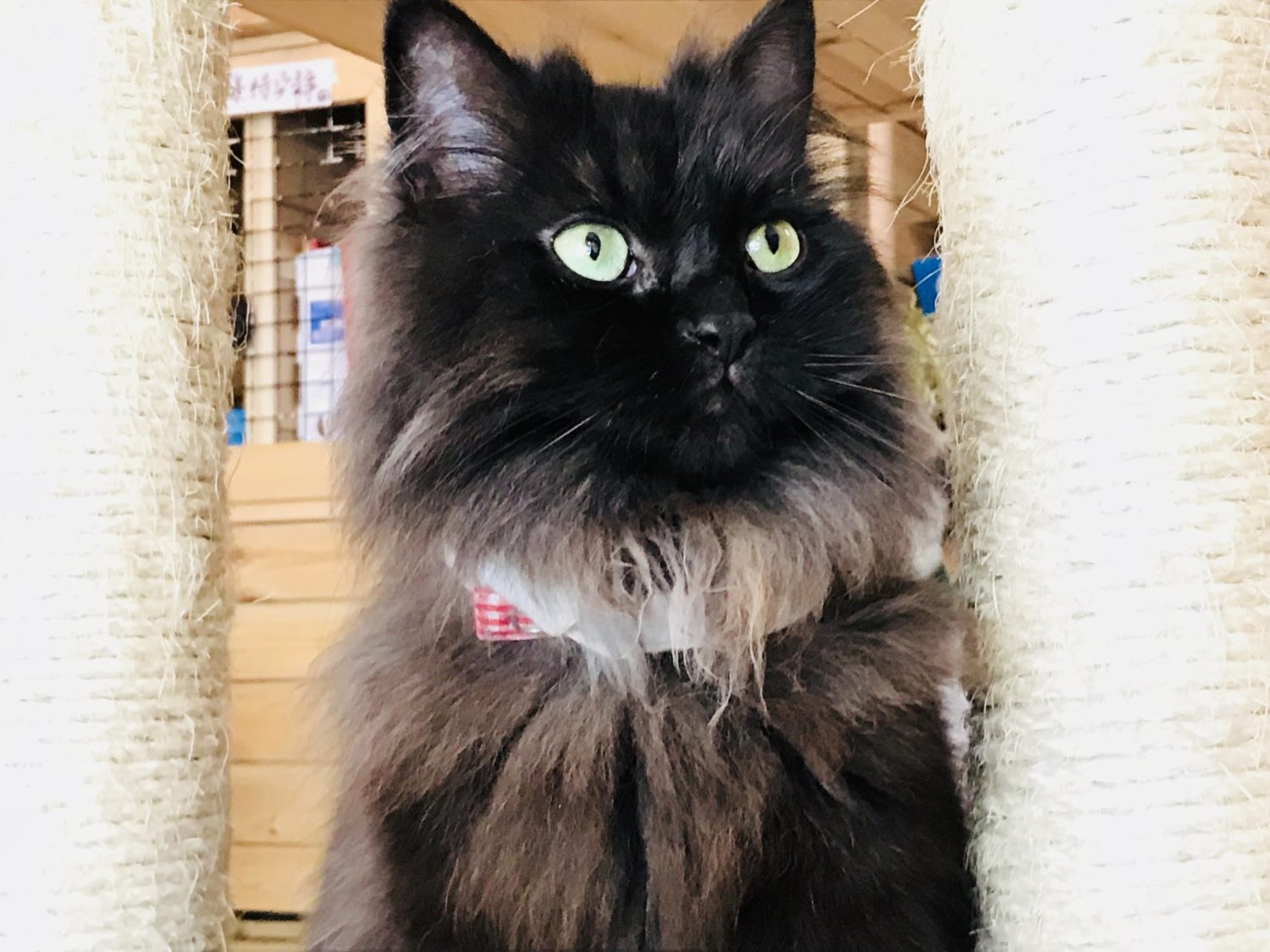 Mr & Mrs Cat Cafe is not easy to find, but this small feline emporium is delightfully quirky and worth the effort.

Located on Hong Kong Island near the Causeway Bay metro stop, we kept circling Foo Ming Street and Lee Garden until we determined we were looking for the Po Ming Building.  The cafe is up one floor from the ground level and of note, is not the only cat cafe in the building- the other being Cat Store aka Cat Island Cafe on the third floor.

We were promptly greeted by the personable staff and seated at one of the cafe’s six tables.  It didn’t take long to see that the cafe’s main attraction is the bevy of beautiful cats in residence.

From pouty Persians to serious British Shorthairs to mischievous Munchkins, the ten kitties of Mr & Mrs Cat Cafe all have oversized personalities, but Pineapple Baby takes the cake.

We aren’t sure why, but cats named after food are very popular in Hong Kong.  I found the name Pineapple Baby tickled me so much, that I snorted out loud when I read the card with her photo on my table.  Insulted at the implication, PB refused to look in my direction when I stood up to take her photo.  I guess I deserved it. 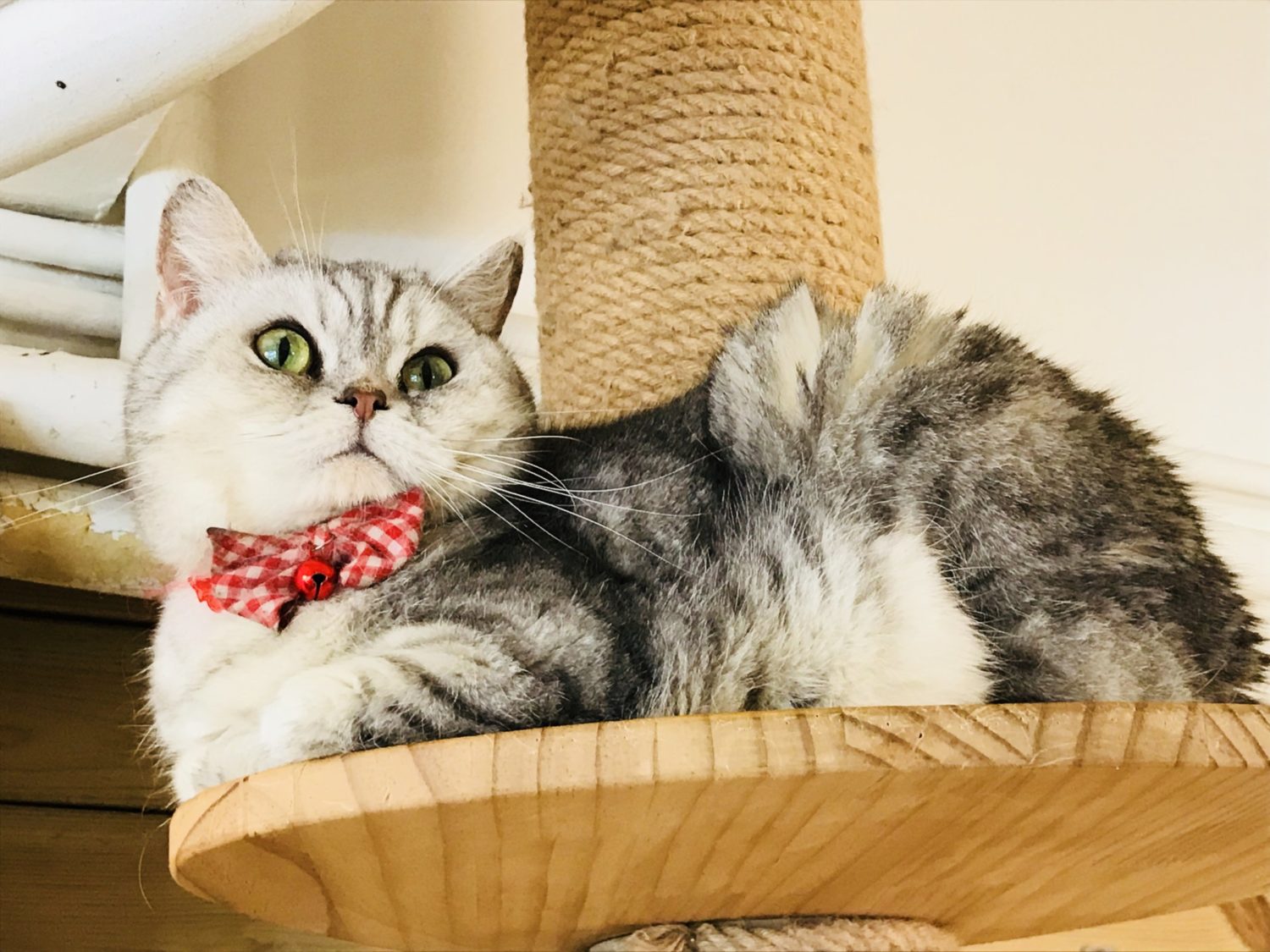 Her name also inspired a post about the coolest cat names from cat cafes from around the world.

Food-wise, we enjoyed a gooey chocolate lava cake and lattes, all extremely delicious.  The coffee was the best of the eight cat cafes we visited.

The space can get a bit crowded, but the tight quarters means better proximity to the cats.  Overall, it’s a great way to spend an hour or two getting your feline fix in Hong Kong.

The Neighbor’s Cat is the alter ego of Paula LaBine, an itinerant cat lover who writes about cat cafes, cat travel and rescue/adoption/TNR.  She is visiting every cat café in the world, 197 in 28 countries so far!   Find her at theneighborscat.com or on Facebook/Twitter @catcafeviews.

The Neighbor’s Cat is the alter ego of Paula LaBine, an itinerant cat lover who writes about cat cafes, rescue/adoption & TNR, and has been featured in Miau Magazine, Katzenworld Blog, The Catnip Times and Taiwan Scene. She is currently on a quest to visit every cat café in the world, 217 in 29 countries so far! Find her at theneighborscat.com or on Instagram/Facebook/Twitter @catcafeviews.

17 thoughts on “The Five Best Cat Cafes in Hong Kong”