Please find below a guest post from Christine and Cloud the Store Cat!

Cloud is the slender, gray and white kitty who lives at The Book Rack in downtown Mocksville NC.  She thrives in her life as a store cat and foster Auntie to abandoned kittens.  She loves it when people come in the store!  She’ll run up to you, greet you at the door and meow “Hello!” with surprising enthusiasm.  She’ll rub on you, follow you around the store, and if you try to ignore her, she’ll meow at you some more!  Her friendliness and enthusiasm fast made her a popular attraction to passers-by in the area.  Many people note how unusual it is for a cat to be so completely open and friendly to complete strangers.  Her adoration for people of all ages, shapes, sizes and colors is even more surprising when you know her full story. Some people have noticed that despite her friendliness, Cloud will sometimes flinch if you reach out to her the wrong way, particularly from above her head.  People familiar with animal rescues recognize this as a telltale sign of abuse in the animal’s past.  We don’t exactly know what happened to Cloud before we found her.  But we can make an educated guess about her story, since it is one that can be told and retold by many cats across the country.

She showed up at my daughter’s house around November of 2011, a lanky teen with very striking markings we estimated her to be about 6 months old.  She was quite well acquainted with the neighborhood strays and outdoor pets and we knew we’d not seen this eye-catching gray and white cat before.  The sad truth was obvious: someone had dumped this young cat as if she were trash.  She was obviously saddened traumatized by the event, and it’s possible that whoever dumped her had also been hitting her. As I said, we don’t know for sure what happened to her, but the effects of her experiences were and still are obvious.  The two females in her home were immediately hostile to Cloud when we tried to bring her in.  The smaller female was especially aggressive and violent.  She was no longer the smallest cat in the house, and she was going to exert her dominance over this new cat!  So whenever they left the house, Cloud willingly went outside.  But winter was fast approaching, and we usually get snow and freezing temps by Christmas.   The final decision to bring her in permanently was made when one afternoon, while Cloud was outside, we were hit by a sudden torrential winter thunder storm.  Cloud took shelter under the neighbor’s shed and refused to leave to come inside when we opened the door and called her.  She looked terrified and desperate, we couldn’t in good conscience leave her outside.  Her husband put on his coat and boots, grabbed an umbrella, and dashed out in to the storm to get the cat and bring her in. The gratitude in Cloud’s face when the warm air of the house closed around her was heartbreaking.  From then on she was put in the bathroom when no one was home. 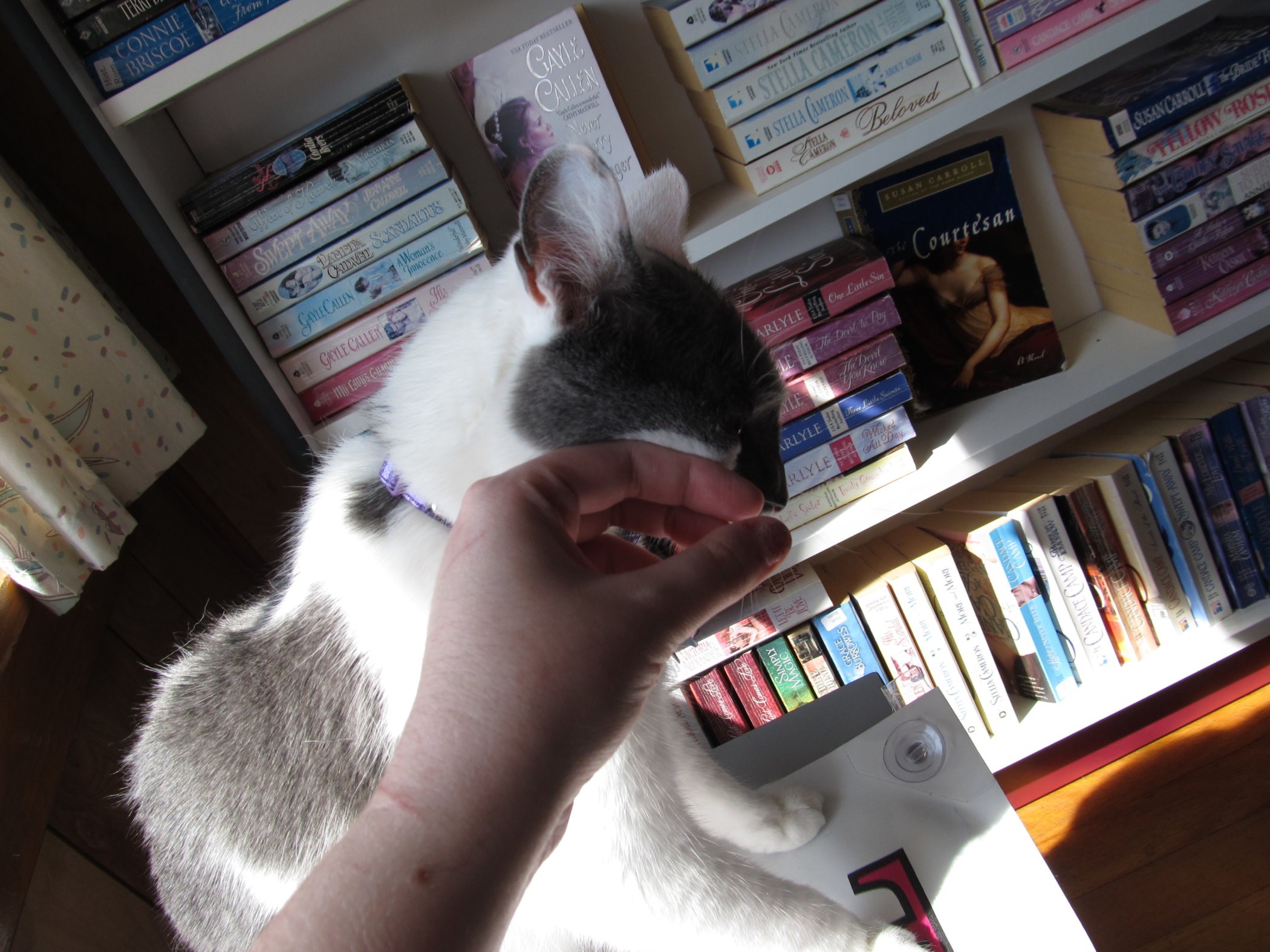 I tried to introduce Cloud to the other cats at my house… sadly it didn’t go over very well, to say the least.  Cloud seemed to like my mother very, very much, which made her Tuxedo, a big, former feral turned loving house cat very jealous and aggressive. The days turned to months, with relations between Cloud and the aggressive cats in either household not improving. Cloud had a big problem.  In our home, and in my daughter’s home, she faced an implacably aggressive opponent.  Nothing helped, and she was so cowed that she didn’t even try to fight back.  She would just scream and run away and end up cornered.  It wasn’t fair to Cloud.  She deserved to be happy and freed from bullies.

We discussed it as a family, and finally decided to see if she’d like living at our second-hand book store.  We cleared it with the landlord, and Cloud June of 2012.  She was timid at first and spent a lot of time catching up on some much-needed peaceful sleep. But she adjusted to life at the store much, much faster than anyone anticipated, and her adoration for customers was very unexpected!  After just a few weeks she realized that “Customers will pet me!”. When people pass by our window Cloud would meow at them!  She’d run to the window and put her paws up and meow!  And if they dared pass by without coming in, she’d growl!  It took us a while to figure out why she would suddenly be growling out the window, it was pretty funny to witness. She kept this up for a few months and then finally accepted that not everyone came in, much to her disappointment. Cloud soon became our mascot, with people coming in special, and bringing friends and family, just to meet her. She would follow people around the store, we assume making book suggestions, but probably begging for pettings. 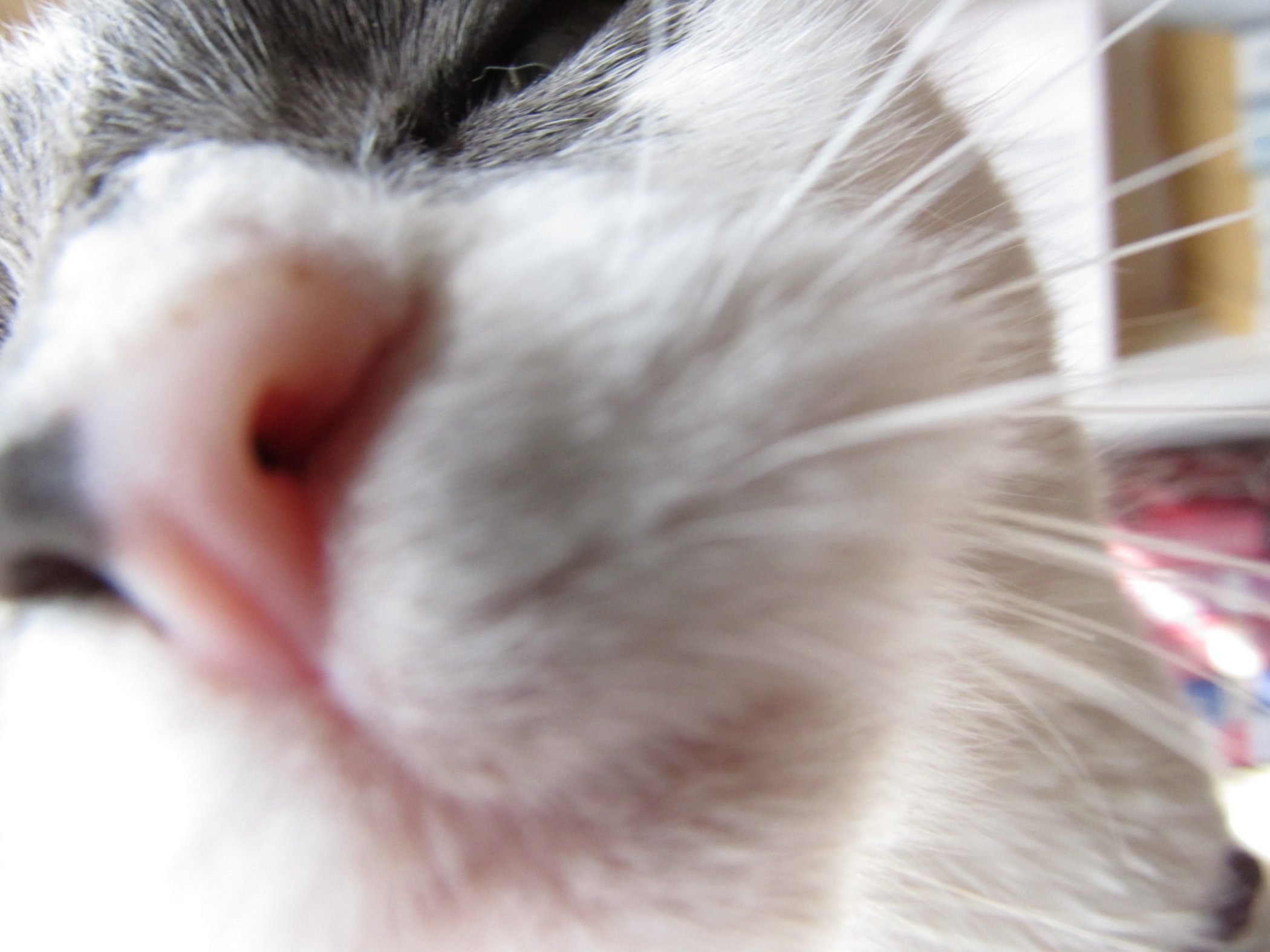 Later that summer we took in a kitten brought to us by a customer. Cloud immediately took to the sickly kitten and became a wonderful “Auntie”. The little tuxedo kitten named Hershey became our second store resident and Cloud’s fast friend. With this success we became fosters for our county and began taking in kittens officially. She would take on the role of teacher to these young ones and show them the rules and behavior of being a good house cat while Hershey ran around like a nut playing with her new frisky friends. The following year we started fostering medical rescue and injured stray kittens for Cloud’s vet. And in 2015 we began working with a private rescue, taking in young mommies and their newborn kittens. Not a fan of adult cats in her store, Cloud seemed to have a soft spot for these poor kitties; and would tolerate these new baby-mommies. She even helped these young strays become loving pets and continued the duty of teaching the babies when they began to be on their feet and getting around (mostly chasing after Aunt Hershey and her tail). Over the past 5 years, with Cloud’s help, we have successfully placed some 40+ kittens in loving homes.

Regular customers get greetings with purrs and kisses, especially when they bring her gifts on her birthday and donations collected for the kittens. She keeps us rodent free and does security patrols; carrying on conversations with the city police walking the nightly downtown beat. She has become such a fixture that the few times we have had a middle of the night issue the first thing to cops say is that we must go in and check on her.

Cloud went from a life of possible abuse, to one of unimaginable loneliness and struggle, to one where the bullying of other cats repeatedly shattered her hopes for a peaceful life indoors, to finally one where she has the love and adoration of dozens of people! This is just fine with her as there’s nothing she likes more in all the world than attention.