Our little Shylee is our problem child. He’s our challenge, this untouchable boy, who has stretched the knowledge of his rescuers. But we’re adapting…verrrrrrry slowly.

We feed the ferals outside. And in return, they gift us with little kittens. Lots of them. And the house is full now. We simply don’t have room for more. So last summer I decided it was time to take action. We needed to start catching them in live traps and taking them in to get fixed. Our local organization participates in a Trap-Neuter-Release program. If we catch them, we can take them in to get fixed, they get ear-tipped, and then we bring them home and release them.

Our first catch was a nursing Mama, so we had to let her go so she could feed her babies under the house. Our second catch was a little gray tabby that was too young to take in yet. But he was also too old to want to live with humans. We estimated he was about 8-10 weeks old when we caught him.

We brought the very unhappy little boy in and kept him in a cage, isolated from the others for about a week. When there didn’t appear to be any health problems, we decided to let him out so he could roam the house and stretch his legs. Our mistake. He was off like a flash, never to get caught again. (Except for once.)

He didn’t have a name yet, and after several weeks of him being an elusive little boy, hanging about on the fringes, we settled on ‘Shylee.’ 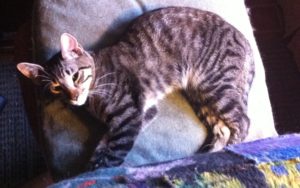 The other kittens we’ve rescued from outside have all been younger – most from 3-4 weeks old, and a few in the 4-6 weeks age bracket. The younger ones adapt to us – oh, in about 12 hours, faster when they’re hungrier and we’re feeding them. The older ones might take a few days. Shylee – well, eight months later we’re still working on it.

We had two other little boys from two different litters and once they were all three old enough, we made appointments for them. I had the cages ready and marked Shylee’s ‘semi-feral’. We wondered how we were going to catch him to take in the next morning. He solved the problem for us. He wandered into one of the open cages to snack on some crunchies. We slid up to the cage and shut the door. The two sisters that typically slept in that cage at night got to spend the evening roaming the house.

We did the happy dance all night long, excited that we had the little boy. Until the next morning. We opened up the cage door and put the carrier up to try to get him in. He leaped over our shoulders and was gone! We spent over an hour trying to catch him. At that point I had to leave with Stache and Cooper otherwise I’d get there too late and we’d be out the money for three neuters, instead of just losing one.

He’s a challenge, this little boy. But we’re making progress. Everyone gets their soft food at bedtime. Following the advice of one of our idols, Jackson Galaxy, we play/chase the prey – we eat – we sleep. And it works wonders. 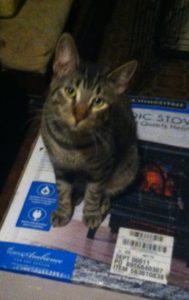 Shylee won’t eat on the floor or down low. But he’s picked two different places he’ll eat. His favorite place is on top of one of the 6-ft bookcases. Usually, when I start bringing out the dishes and sitting them out on the counter, he’ll run from where he’s at, around the living room and up the path to the top of the bookcase, getting ‘in position.’ If another cat has already claimed that spot for a snooze, Shylee heads to his second favorite spot – on top of a large cage that sits on the pool table. (Yes, we have a pool table. No, we don’t play anymore. It’s strictly for holding a cat’s bedtime cage now.)

I can touch Shylee’s front paw now. Usually. If I let him sniff my finger first, then I can lightly touch his front paw. Sometimes he lets me pat him several times. Sometimes not. If I waggle my finger in front of him, sometimes he’ll play patty-cake with me. And sometimes if he’s underneath the pool table, as I walk by he reaches out and snags my slipper as if playing a quick game of ‘tag-you’re it.’

No, he’s never going to be a lap cat, this little boy. But that’s okay. He’s still our little Shylee and he’s ours for life, whether we can pet him or not. Maybe by the time he’s an old man?

3 thoughts on “Our Shylee Challenge”