Parker and the swat
Eventually we adopted another cat, this one we named Parker for his short gray fur, which looked like it was parkerized. He was another one who adopted us, asking my partner for a place to stay. He was fairly well mannered, yet somewhat timid. Orion mentored him. This involved training in household rules and the occasional swat when he needed it. I found it a little odd, because Parker was an unaltered male, but Orion knew who was truly master of the house, and his lack of fuzzy pompoms meant nothing. He still had muscles of steel when he needed them, and he beat Parker at wrestling every time.

Once, Orion caught Parker sitting in a window he wasn’t supposed to be in. With a single smooth motion, he grabbed Parker with his paws and threw him bodily out of the window seat. It was the most amazing display of kitty-judo I’ve ever seen. Even though he became a little enforcer, Orion was still gentle when he needed to be. I often saw him washing Parker, gently tussling with him, or sleeping with him in a ball.

One day, though, our cats had cause to worry. Parker had come to us with worms, so they all needed to be treated. My partner and I both anticipated trouble. Orion would probably deal with it fine, but Parker and Cassiopeia were growler-yowlers when it came to pills. Yet, the pills needed to be administered, no matter what, so we came up with a plan. We’d use a towel and a syringe of water so that ever-popular pill would go down. First, we tried it the nice way, holding the cats on our laps and talking to them gently, explaining why we needed to give them the odious pill, and telling them they wouldn’t be hurt. Parker was first, and he didn’t listen at all. Instead he tried to scratch us. With no choice left, out came the Towel of Doom. Now he really acted like he was being murdered.

As Parker was struggling and yowling, I saw Orion come up behind him. I was surprised by what Orion did next. Instead of sympathy, he delivered a hearty whack to Parker’s towel-wrapped rear end! It was as if he was saying “calm down, you idiot!” We pilled Parker, then wrapped Cassiopeia up. She started howling and doing the same things Parker had. Orion gave her a whack too, but not as hard.
Now it was Orion’s turn for the pill. I looked at him, standing there, not running away or hiding. I asked him “are you going to take your pill like a good boy?” He still didn’t run, so I took him onto my lap and gave him his pill with a minimum of fuss, without even the need for a syringe of water. No scratching, no biting, not even one yowl. He still trusted me. I petted him and told him he was a good boy. 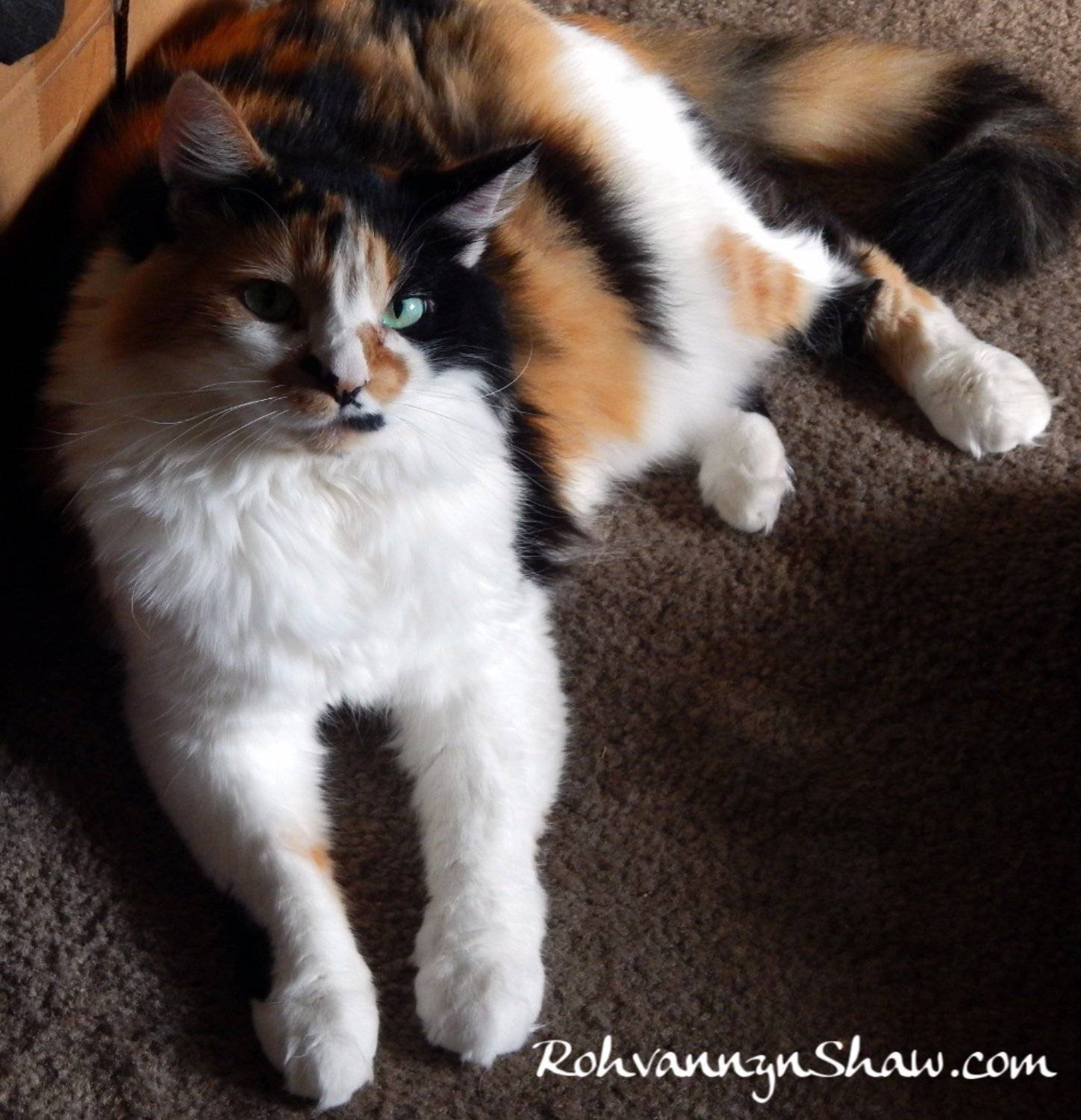 The Fall of Basement Cat
We had several good years together. When we discovered Lolcats and the Cheeseburger Network, we decided that Orion must really be Basement Cat. He didn’t seem to disagree, but only gave us the Evil Kitty stare that he’d perfected, as if to prove our point.

Eventually our fortunes changed. My partner, Orion, Cassiopeia and I moved first to Nevada, then Arizona. Parker had to be re-homed. We’d lost our house and had nowhere to go but south. So south we went, in search of work and warmth.
Arizona was lovely, very different than damp Washington and dry Nevad. We were lucky and found someone who let us camp in their yard, while I was waiting for my first paycheck from my new job. Cassiopeia was doing all right, but Orion fell ill. He’d probably gotten a case of Valley Fever, most likely from when he had his first ecstatic roll in Arizona dust. Valley Fever lives in dust, and it’s a fungal infection that can be fairly difficult to treat even with veterinary care. My boy would have needed strong antifungal medications and probably IV treatment. No vet would talk to us, however, and with my recent history I couldn’t qualify for carecredit. We grew desperate. Orion stopped eating and lost weight no matter what we did. Despite our best efforts, and my partner’s attempts at CPR at the end, Orion passed from this world at about two AM in December, cradled in our arms.

His loss tore me up inside. I sobbed all night, inconsolable. In the morning, we laid him in the ground, digging through the hard Arizona soil, laboriously making a hole large enough and deep enough for his body to be protected. My partner wrapped him in her favorite sweater, that he’d so often liked to sleep on, and we said a few words over his grave. We put him under a tree where birds lived, bred and chattered, where he’d loved to watch them. I told my mother and she donated to a cat charity, putting the gift in his name. A big part of my life was gone. Now I’d lost my home, and my best friend.

We both mourned him for a long time. We missed him so much – he had been such a 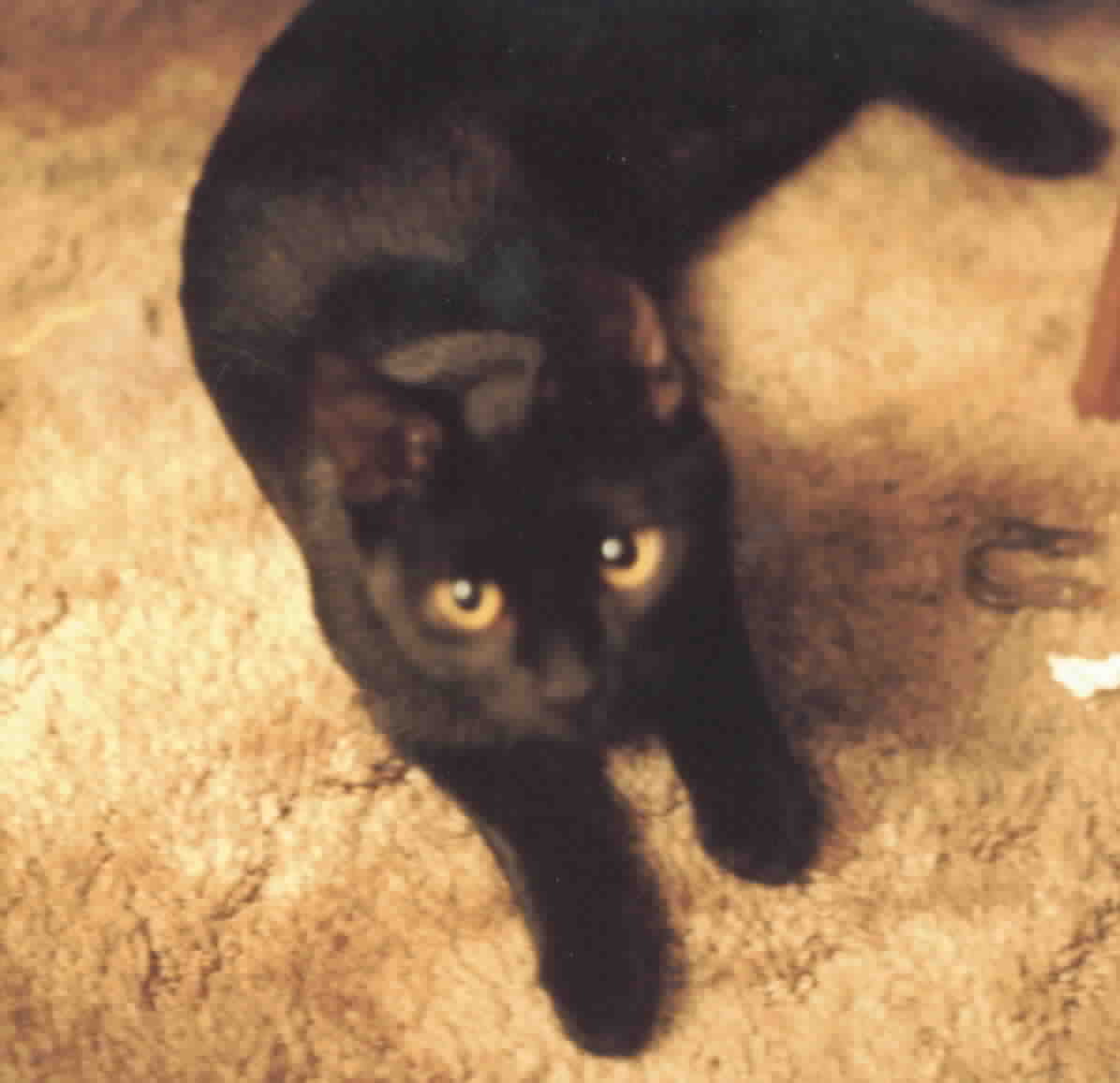 vibrant presence in our lives. Gradually as the pain faded, we realized he wasn’t truly lost. His body might have been in the ground, but his spirit was still with us. We felt him curled up at our feet at night, or stropping against our legs during the day. With his physical form gone, he was set free to follow us where he willed. Cassiopeia had mourned him just as much as we did, but we’ve caught her playing with his spirit too, late at night. Every once in a while they’ll still have one of their chase-games.

Hope Springs Eternal
We found an apartment, moved in, settled down. I got used to my new job and realized it was better working in this town then where I’d come from, and the pay was better with lower cost of living. We started to see there was hope. At the same time, we discovered more things about our Cassiopeia when she embraced her role as Only Cat.
For one, we noticed that her skull was rather highly domed, with plenty of room for brains in there. As she grew older and wiser, she began really showing her intelligence. We learned that she liked the sound of Japanese better than English, so her name morphed into “Nezumi,” which means “Mouse” in Japanese, because she liked that better than either Cassiopeia or Mouse. We learned she could throw her toys, sometimes quite high. We also learned how well she understood us, and how much she missed Orion. We heard her imitate his meow, and sometimes wake up late at night, calling for him. 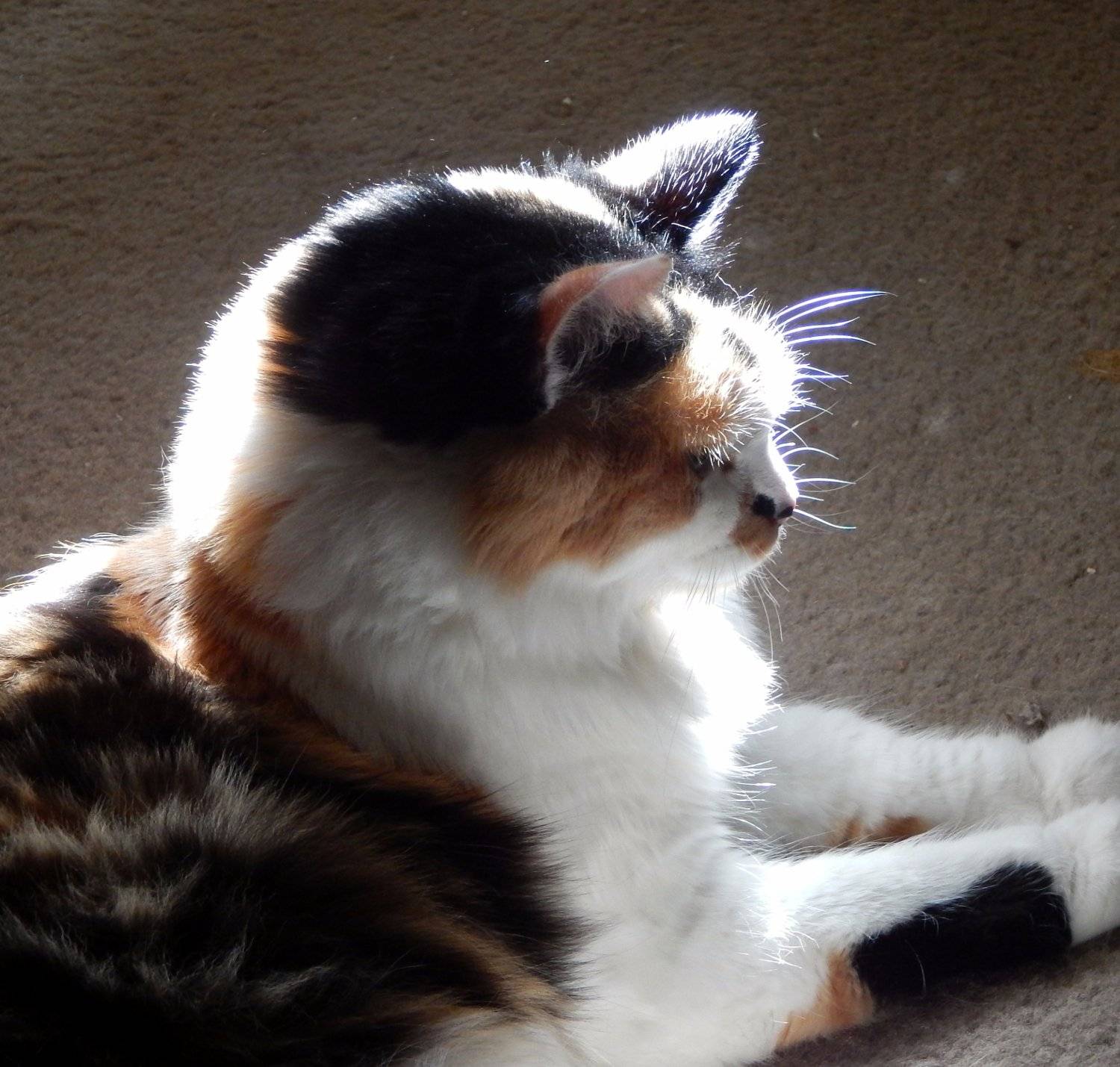 Nezumi took over Orion’s old duties, putting us to bed when it was time, and watching for me when it time for me to come home from work. Later, she learned her own tricks, like patting us on the knee or cheek when she wanted something, or wrapping her tail around one of our wrists to hold hands. She discovered eat lettuce which she loves to eat, and she is an inveterate hunter of moths. At one point, she even learned the command to lie down! It’s not a trick, but rather her understanding of our request and complying with it. She can even tell time. You can say “Nezumi-chan, one more hour. Bother me then.” She’ll understand.

Now she’s our artist’s cat. She oversees all writing and drawing in the house, watches over our computer use, monitors my blogging. She’s also happy to pose for photographs.

Into the Future….
We moved to a better place with tile floors and wonderful light, and now our girl has a big front window she can see me come home in and watch the birds through. Her legs, once so weak, are strong and staying that way with the help of her daily dose of Cosequin. She’s getting a little older now but is still very full of life. It’s plain she remembers Orion and what he taught her…

… because she still puts us to bed at night, and wakes us in the morning… 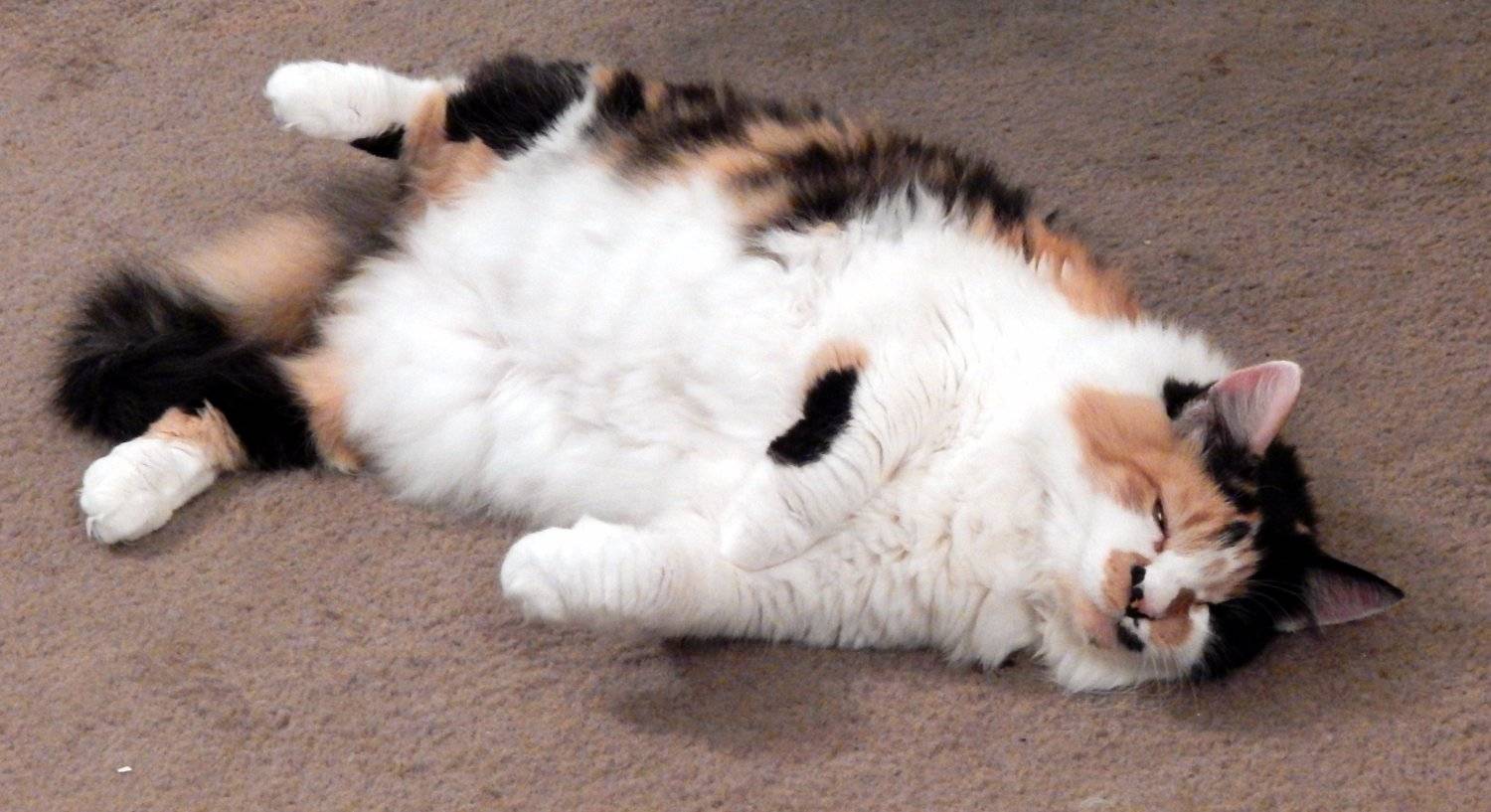 All images and text in this entry copyright Rohvannyn Shaw of Mindflight, used with permission on Katzenworld.

14 thoughts on “The story of Orion and Cassiopeia: Part 2”