It’s no surprise that the Internet offers an abundance of content that involves cats. In line with that, cats are also the most viewed animal on the World Wide Web. They basically rule the Internet and humans revere them like gods. Humans love cats so much, they probably wished they were feline groomers for the rest of their lives. This is probably due to the positive effects that cats have on pet owners and on people who view images or videos of the majestic creatures online. The following are some cat-related memes that serve as proof (as if we needed any) that felines have somehow taken over the world wide web.

LOLcats are image macro of cats with captions that are grammatically incorrect or misspelled. Said manner of speaking is called “lolspeak” and this is how humans imagine cats talk should it be possible for the latter to communicate. Seeing that LOL is an abbreviation of “laugh out loud,” these image memes are intended to be funny plus the clumsy caption adds cuteness to the already-cute cat in the image. There is even a tradition which involves posting LOLcats on Saturdays which is aptly named “Caturday.” 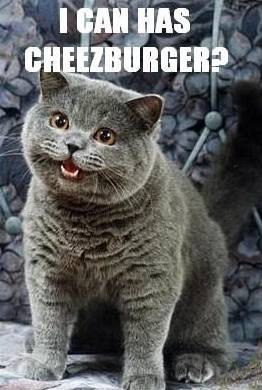 Nyan Cat is a cartoon of a space cat with a pop tart for a body that leaves a trail of rainbow as it travels. The animated image was developed by Christopher Torres from Dallas, Texas when he decides to merge the suggestions of 2 different people from a Red Cross donation campaign – one recommended Torres to draw a “pop tart” while another mentioned “cat.” It was also inspired by Torres’ pet deceased cat named Marty. Youtube user SARA JUNE used Torres’ pop tart cat animation on an uploaded video with the song “Nyanyanyanyanyanyanya!” as background. “Nyan” is the Japanese equivalent for “meow” in English and the song was a cover of singing voice synthesizer Hatsune Miku by Momomomo.

Grumpy Cat is the name of a snowshoe cat who is popular for pictures of her annoyed face. Her real name is Tardar Sauce and her grumpy look, hence the name, can be attributed to her dwarfism and underbite. Her facial expression is usually used as reaction image to anything that a poster finds irritating. Other cats with displeased facial expression have been previously used as image macros but none of them rose to fame like Tardar Sauce did. Her face is sometimes used with quotes of irritable fictional characters from movies, music, and other media. Despite her seemingly unapproachable appearance, most people would still pay a fortune just to have the opportunity to groom her. 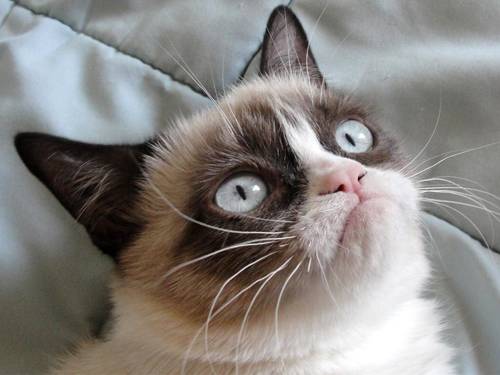 Maru is yet another proof that cats have taken over the Internet. He is basically the most popular cat in the world, relying not on captions but on his playful nature comparable to that of an adorable child. Videos of the Scottish Fold cat playing, jumping or even just lying around have been uploaded on Youtube by his owner who goes by the username mugumogu. Maru lives in Japan and his name is Japanese for “round.” He has been featured in many prestigious online publications and has also been given awards numerous times, sometimes even for consecutive years. In Japan, he has been featured in commercials and he (or his owner) has published his own photobooks and DVD compilation.

Most certainly, this is not the last time we hear of our feline friends rising to popularity. There will always be another cat (or a cat-related idea) who is destined for greatness. Who knows? The next internet sensation might be your very own cat!

When Kim Cabatuan is not idly staring at memes of cats on the Internet or playing video games, he is busy trying to be a responsible adult by working as a freelancer for Open Colleges. He is doing what he can to help people pursue a career in Animal Care, which is actually not a bad career choice to be perfectly honest.

32 thoughts on “Cats Are The Rulers of the Internet”