Many of the cathedrals in the UK have local resident cats which of course help keeping them mice free!

Louis (left) – Who is the resident cat of Well’s Cathedral however faces a new enemy in his kingdom, a local tabby cat named Pangur (right)! 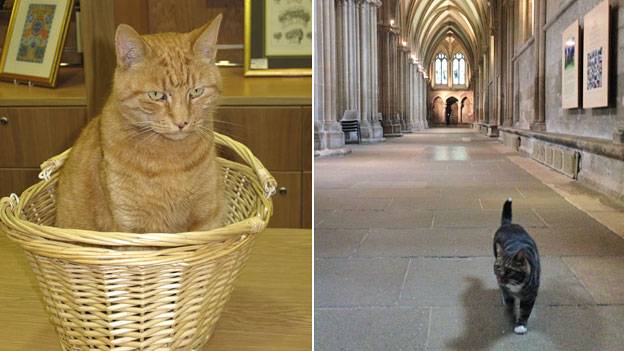 One would think that surely a cathedral is large enough for both of them to find their own space? Not for these two… they seem to favor the same spots! 🙁

More on this story from the BBC:

A turf war looks set to break out at Wells Cathedral, where the resident tomcat is facing competition from a tabby interloper.

Ginger Louis has become one of the most photographed features at the cathedral since staff adopted him 10 years ago.

But his fur has been ruffled by local tortoiseshell Pangur, who has taken to roaming the pews and sitting in front of the altar during services.

Lindsay Mann, from the cathedral, said Louis was not “enormously impressed”.

Pangur is owned by Philippa Collings who lives near the cathedral, but he prefers stealing Louis’ food to eating at home.

‘Not best friends’
Ms Collings said: “He’s just decided he likes the cathedral and the cathedral shop much better than he likes me, his poor owner, and he very, very rarely comes home.

“Two and half months will go past and he won’t come back. He’s just got far too much going on in his life.”

Ms Mann said both cats appear to favour the same spots in the 12th Century building.

“Louis is quite firmly entrenched at the cathedral. He has his own basket in the shop,” she said.

The 17-year-old tomcat is said to be “aloof” but so far there have been no major spats between the feline pair.

“The cathedral’s quite a large place but they do tend to favour the same areas and I wouldn’t say they are best of friends,” she added.