Hello my name is Bolle and I want to tell you the story of the  “6 Racker vom Wagrain”, 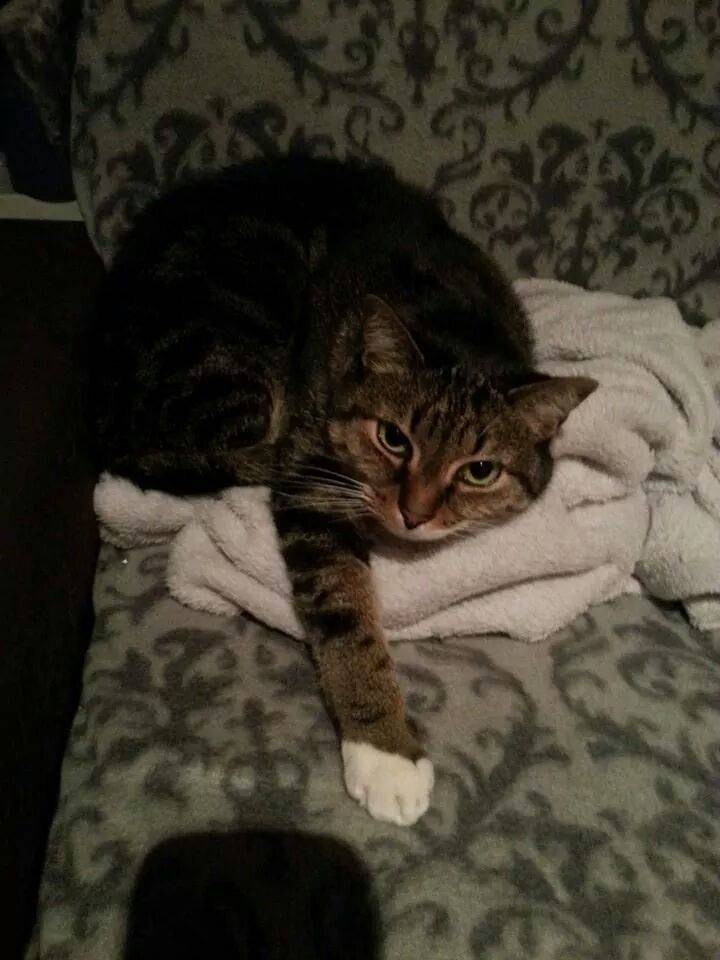 I am 6 years old (Also the oldest cat of the group! :D) and how we all got together with our family! 🙂
July 2008 my now family (Mummy + Daddy and daughter Jenny) went to the local animal shelter. The plan was to just have a “look”. Right at the entrance to the cat area they saw me and 3 other little kittens squashed together in a small rabbit cage. Mummy kneeled down and started talking to us! Her voice was so calm and friendly. This was when I streched out one of my little white paws and she got to stroke me… That was so nice and I never got a human to be so nice to me!

Mummy started talking to the lady that run the shelter to find out more about me! She found out that the shelter had found me stuck in a gurkin glass which made her cry. This was when they decided to take me home but not just me! They also took home another cat called Carlo who was 12 years old.

And below is a picture of tiny me and big bro Carlo: 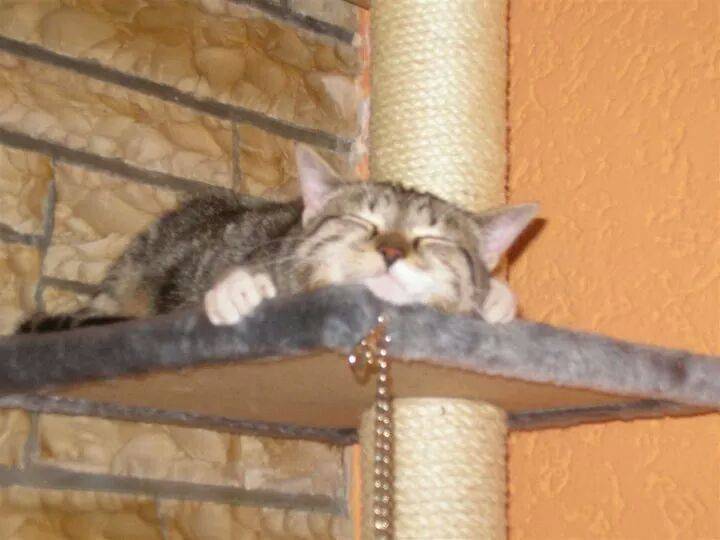 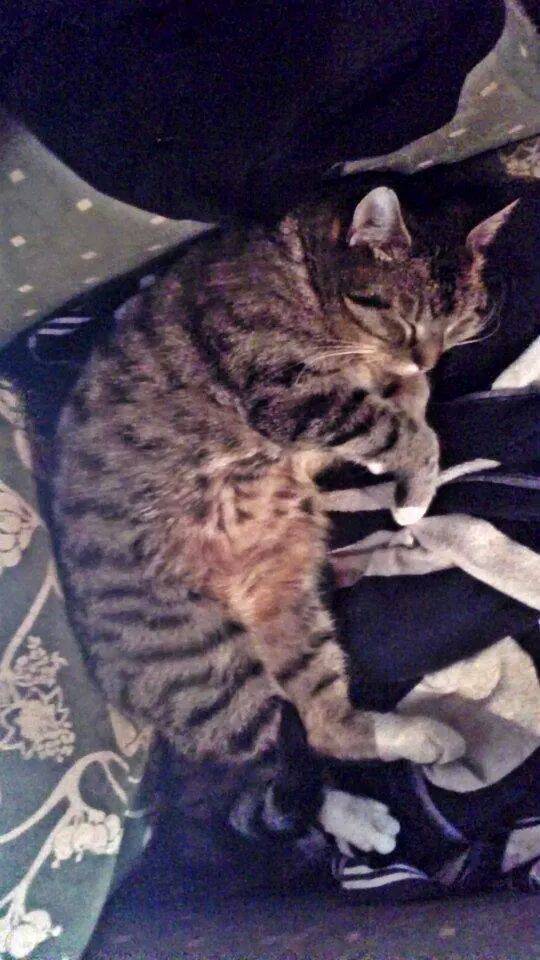 Carlo and me became best friends but unfortunately in 2012 we lost him because of a car accident. 🙁 My human parents and I were very sad and crying for days! I lost my big brother and felt a bit lonely.

Shortly after this sad moment in time, Mummy found out about a woman who bought pedigree kitten cheap over the internet just to resell them on eBay! Mummy’s friend also told her about a small Norwegian forest cat that was stuck at the place of this woman. According to mummy’s friend, he had totally sealed eyes and looked otherwise very unhealthy. Mummy was very worried that this woman would harm the lil boy, especially because she is very engaged in animal welfare! Therefore she drove to this place immediately and rescued this poor little kitten. Luckily it was just a bad case of conjunctivitis. But can you believe that the evil woman reported our mummy to the police for rescuing him! He was so thin and afraid but we managed to nurse him back to health and he became my best friend! Loki is now 1.5 years old. 🙂

You can see some photos of him below! 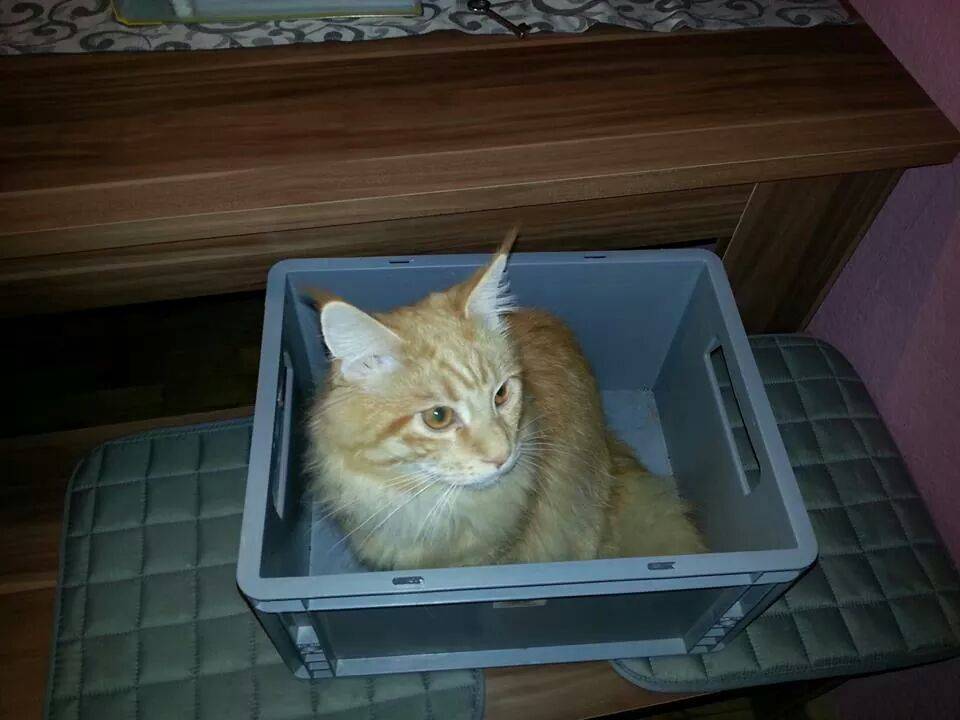 (In a box! Not that you hadn’t already realised how much cats love boxes =0) 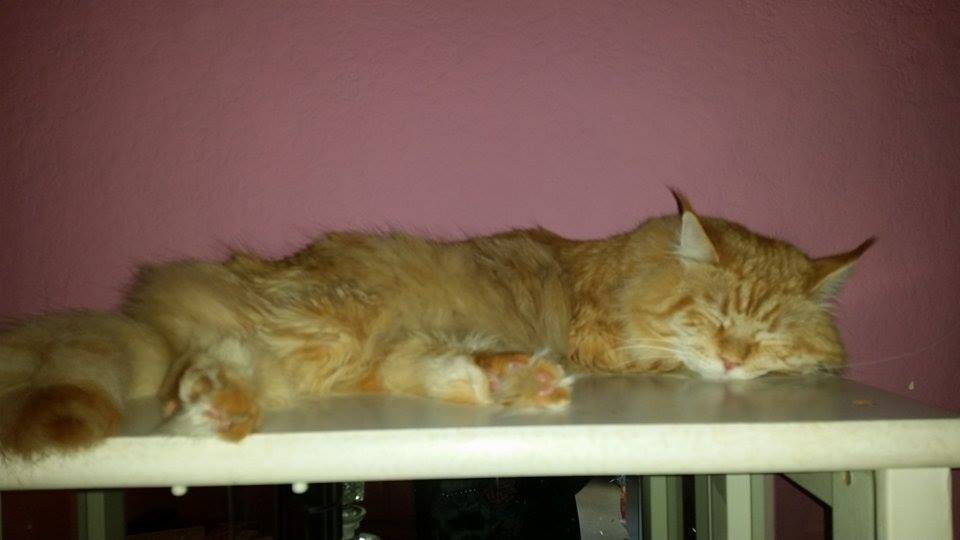 (And isn’t he cute on this photo) 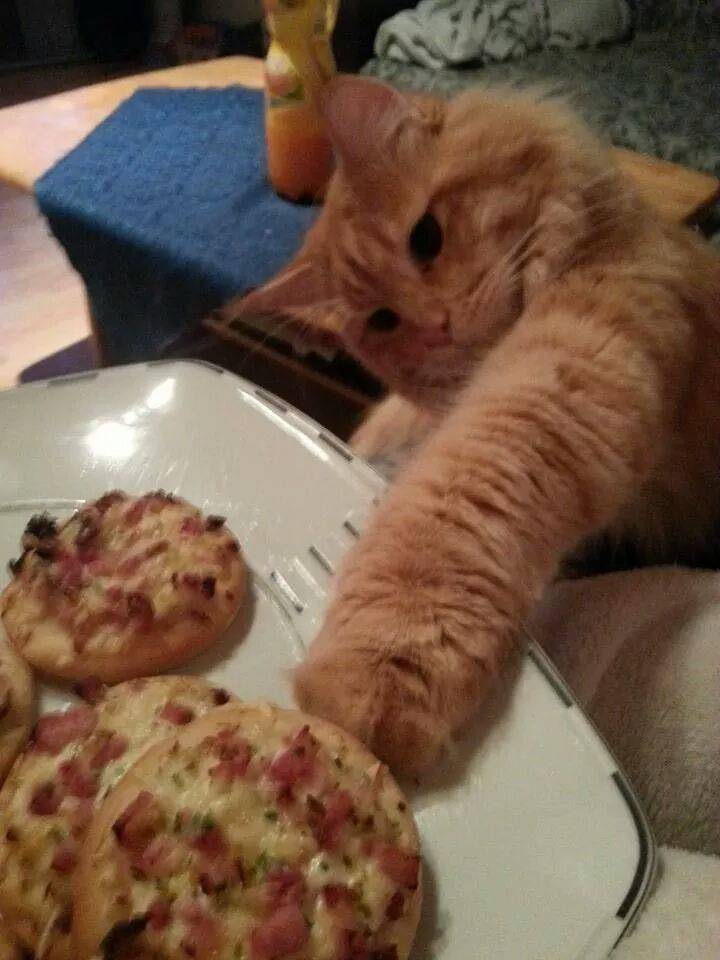 (Right well… up to no good obviously! LOL)

May 2013 Mummy found out from our local cat charity that there was a small flat with over 30 cats in it! June 2013 she managed to get to the flat as the police and cat charity were emptying the house. The situation in this place was just awful! Not one cat was neutered and the poor girls were constantly pregnant. Endless amount of new kitten without hope and love. Mummy therefore decided to rescue another cat! 🙂 She took home a small longhair cat which at this point had almost no fur and was just skin and bone. She took her straight to vet! It turned out that the poor thing was completely infested with flees and her ears were black from all the ear mites… The vet treated her and continued with her examination. It turned out she (now called Luna) was deaf. He also realised that the poor girl was pregnant but due to her condition at the time the vet recommended against an abortion as it would have more than likely killed her. 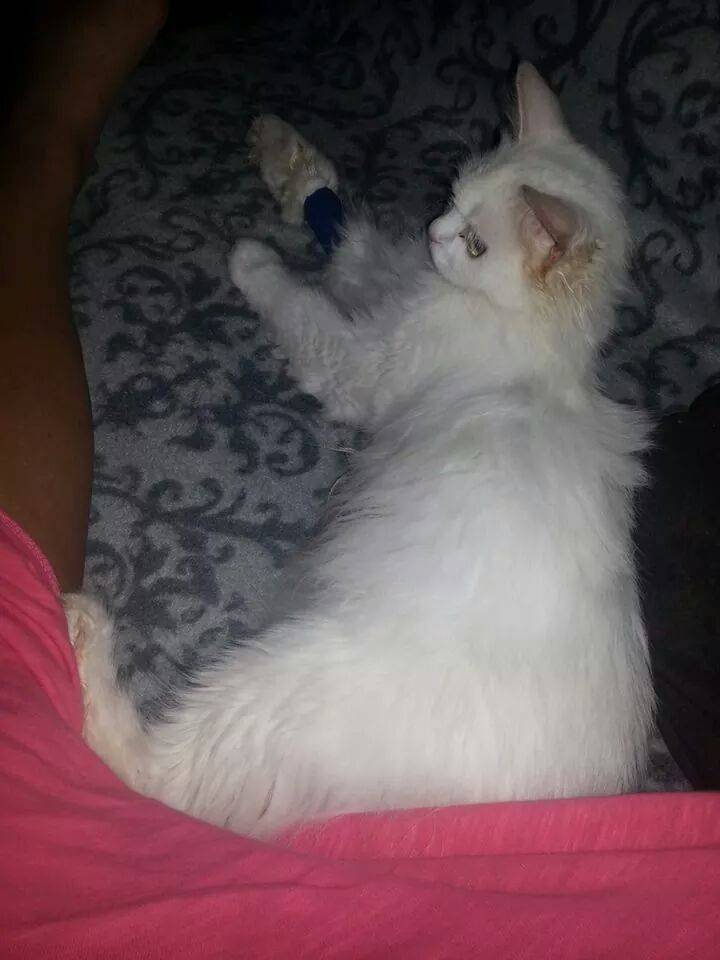 (Luna when she first joined us) 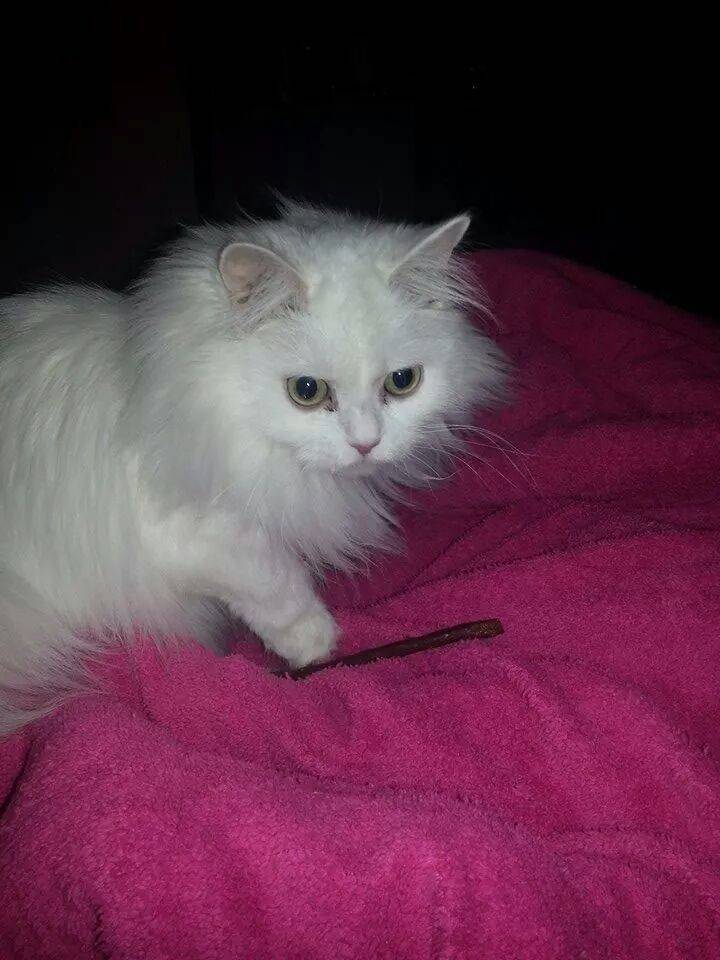 Luna too is now 1.5 years old! We nurtured Luna and on the night of the 13th to the 14th of July she gave birth! As Luna was still a bit weak the birth was very difficult and Mummy had to be the midwife. Luna gave birth to three little kitten, a boy called Spikey and two girls called Zoe and Josie. The first day after the birth went fine. Luna slept a lot and let her babies drink. Unfortunately though, Josie didn’t survive the second night 🙁 And this was when it became a disaster. On the second night Luna was unable to produce more milk for her kittens. Our human parents did everything they could to safe the little kittens that were no larger than a mouse! Despite both of them being in full-time work they fed them every 2 hours and even their 13 year old daughter Jenny helped with everything she could. And their hard work payed off! The two survived. 🙂 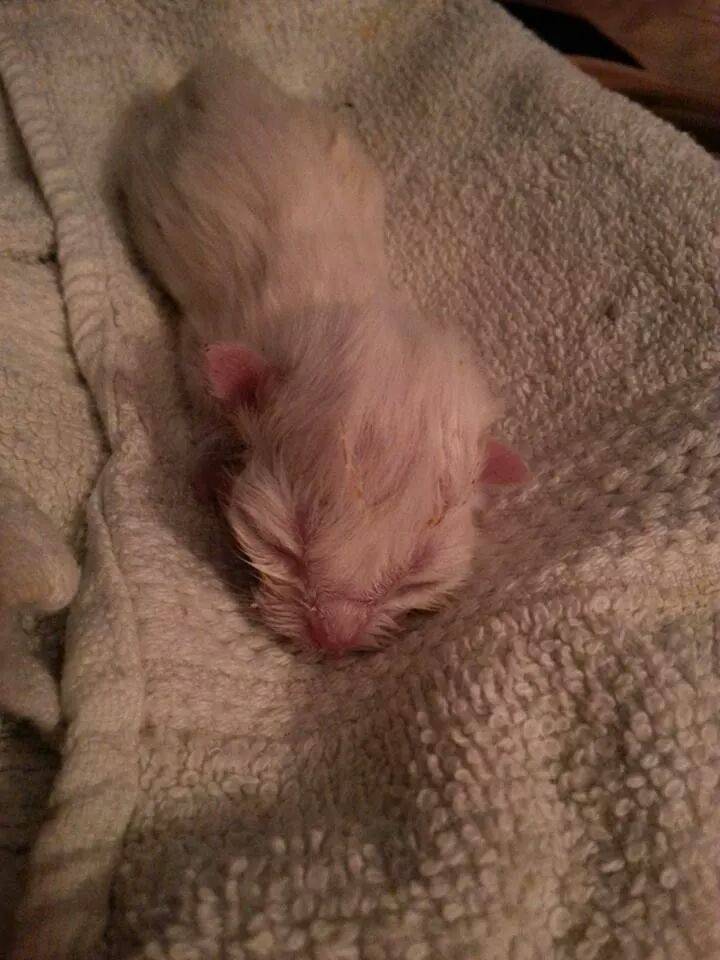 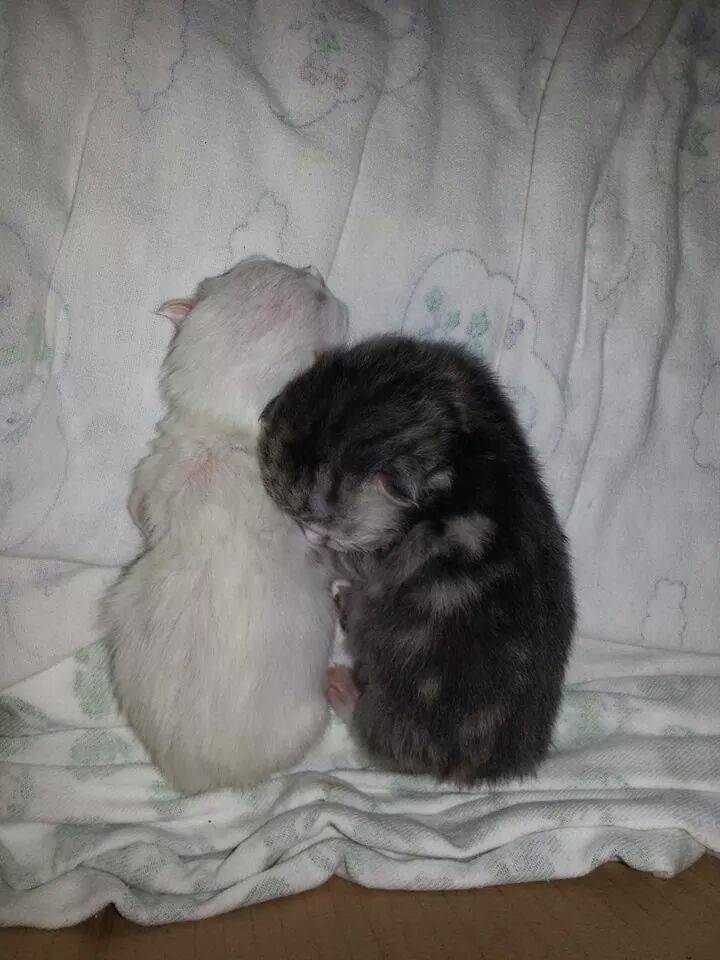 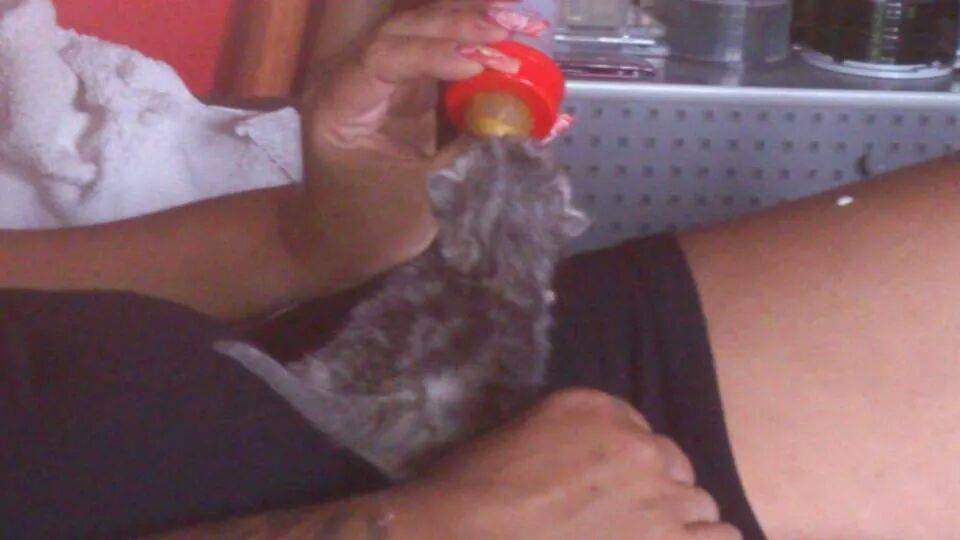 Because of the many cats in the flat that Luna came from the kittens had different fathers and looked very different! Zoe turned out to be a white longhair cat. While she was born with hearing she unfortunately was born with a defected heart which the vet said would have to be operated on at a later point. Spikey looks like a proper Whiskas cat and is totally healthy 🙂 Of course our parents could no longer part with the 2 kittens and within this short time our feline family grew from 2 to 5. 😀 Oh and don’t forget Zoe and Spikey will have their first birthday soon so please send them some presents 😉 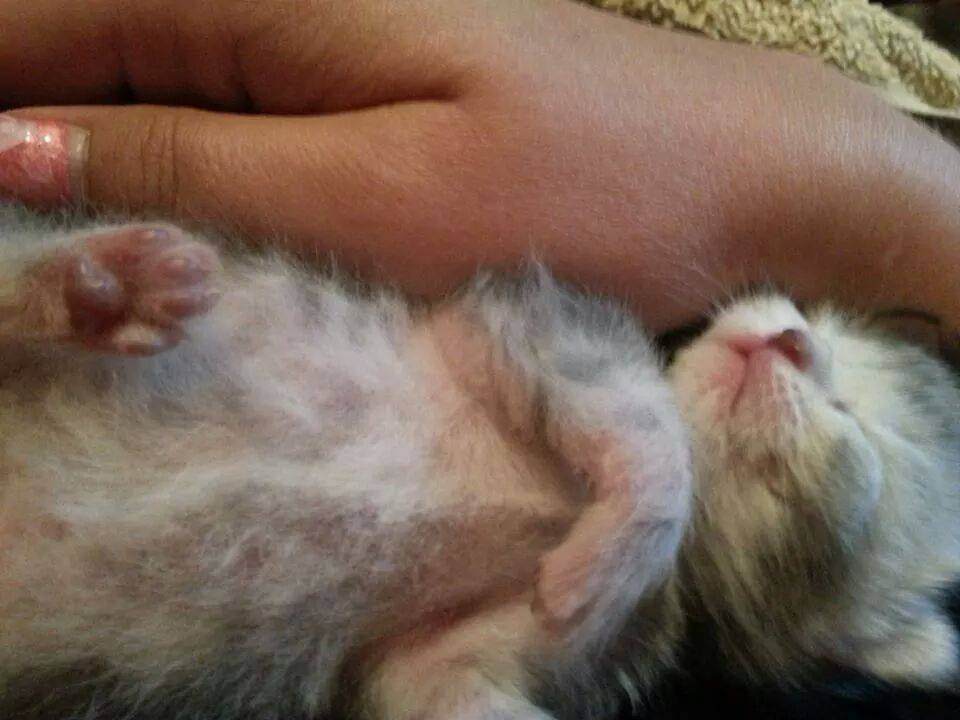 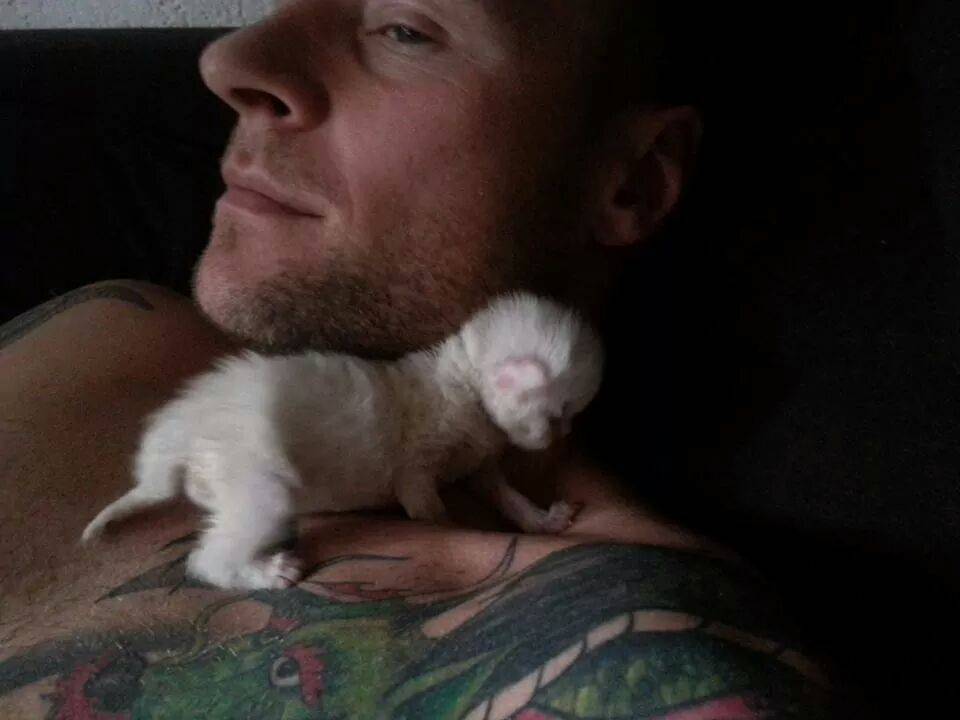 (Exploring and climbing up on human daddies shoulder 😀 ) 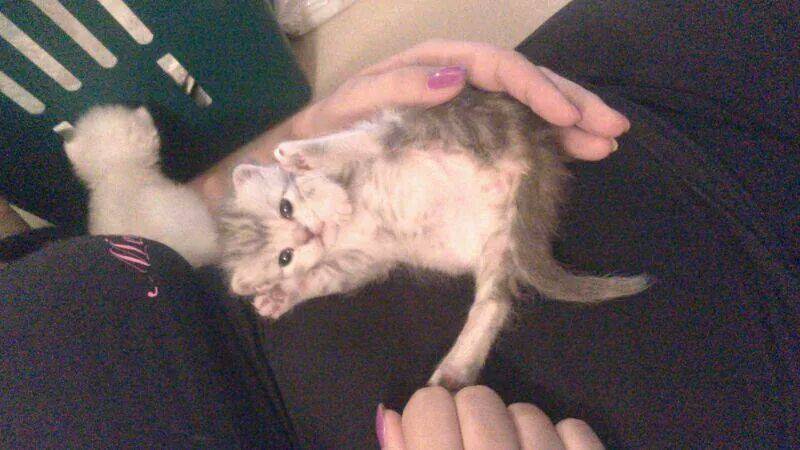 (Play with me Spikey says or I shall scratch ya with my mighty paws =D !!!! ) 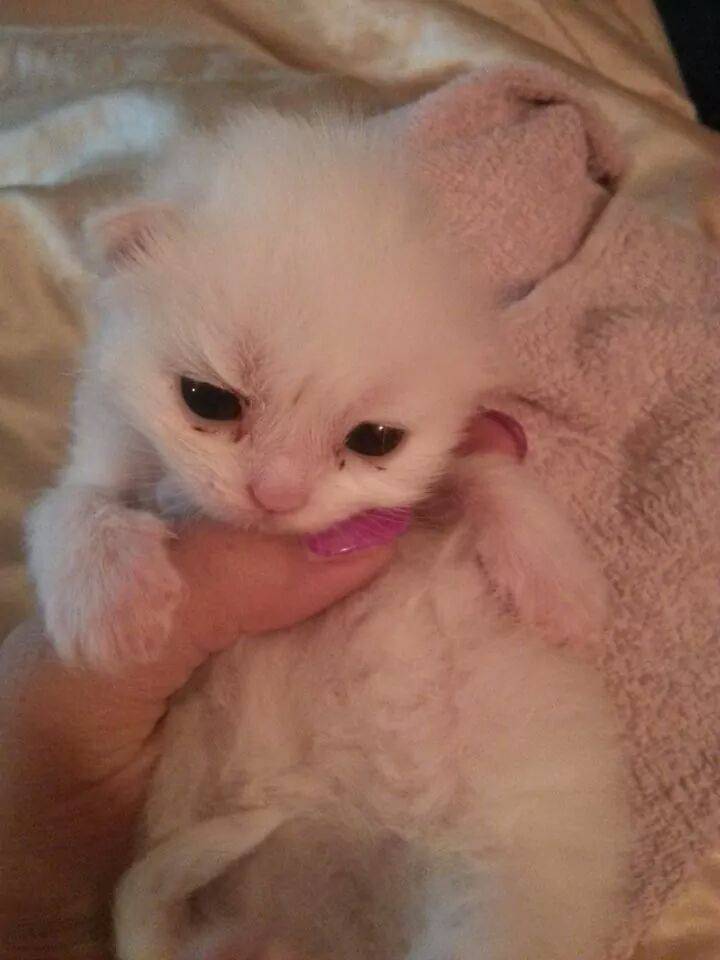 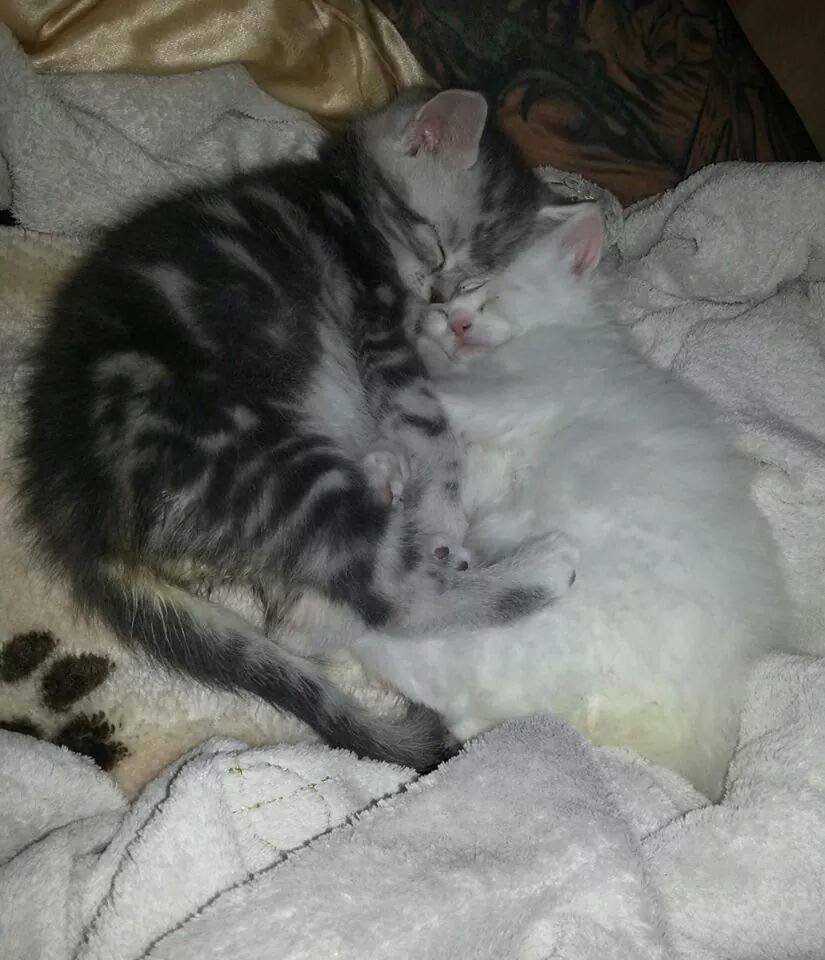 And now you wonder why we are 6? Well 3 months ago number 6 joined us! Her name is Peaches and she too came from the small flat with the many cats. The poor girl was re-homed to a bad location and the cat charity had to get a German lawyer to get her returned. Due to the incest in the flat she too was deaf btw! 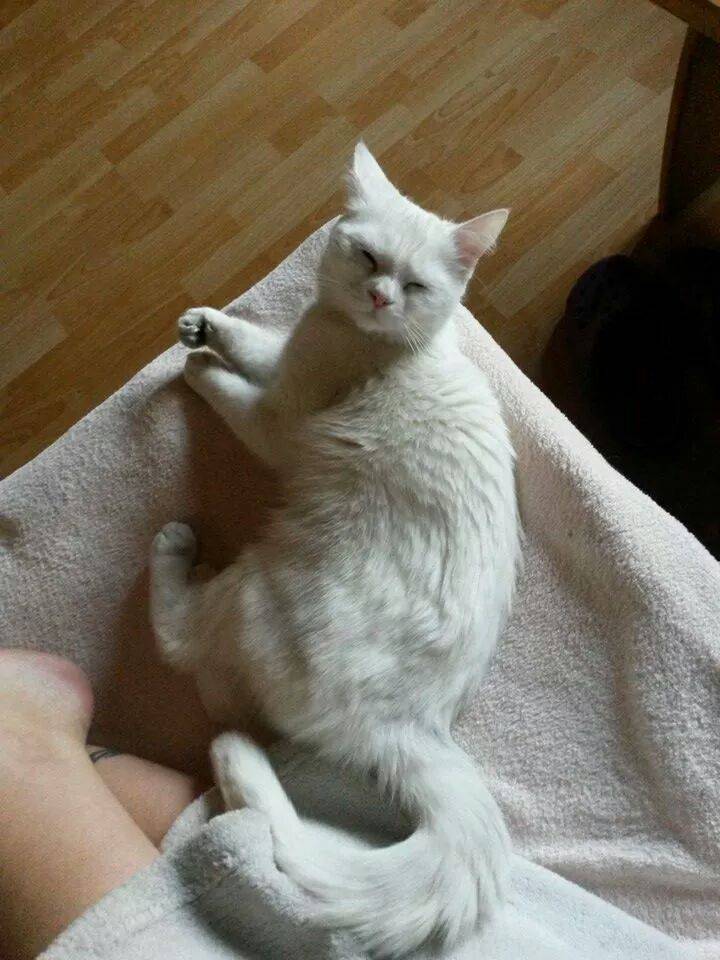 Apparently she was kept in a basement without light, toys or humans… When Daddy heard about this he immediately decided that she too had to come and join us! 😀 Daddy was like she is a relative of the 3 of us so we must help her! And let’s face it “she is only a half portion anyway” (or so the German saying goes =o) She is now about a year old and has perfectly integrated into our clan! 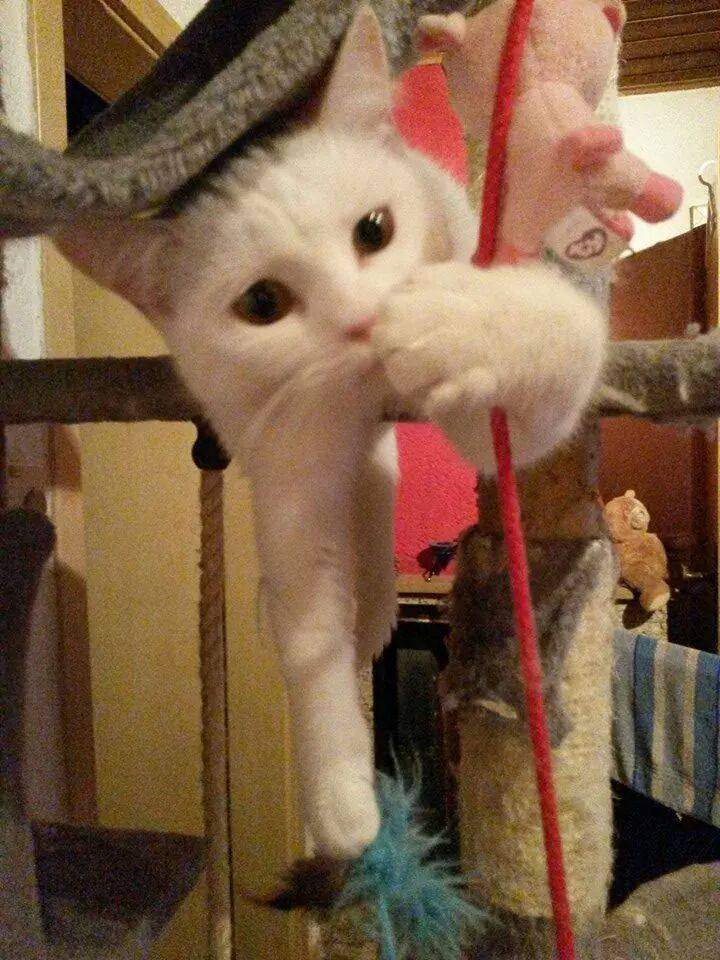 (Peaches playing with our many toys ^^)

And this is it for now of our happy feline and human family! We all love each other and are so happy that our human parents adopted us. While we may not be proper house cats we don’t really mind this and Mummy and Daddy do take us out in the garden supervised and in fact are planning for a proper safe outside area for us all 🙂 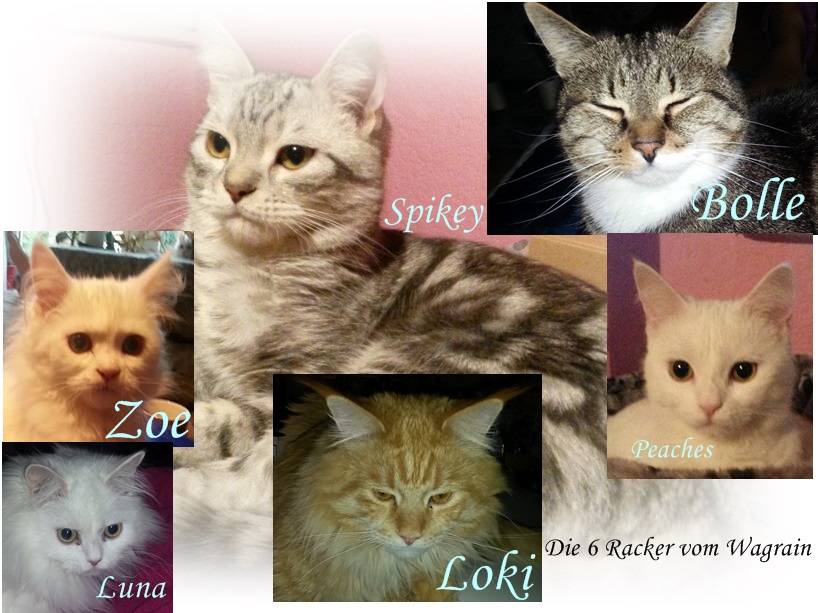 (All of us together!)

And that is it from me Bolle for now! I shall have to take a break as my paws hurt much after all this typing.

But I shall be back soon and thank you so much everyone at Katzenworld for re-posting my story!

If you want to see more pictures of me and the others please click here for our own page. 🙂

15 thoughts on “Guest stars: The story of the “6 Racker vom Wagrain””