Have you ever wondered what the house cats are thinking during the Zombie Apocalypse? Because Clutch the Calico has a lot to say about her humans and their survival skills (or complete lack thereof). It’s Cats VS Zombies in the cute and sarcastic world of Zombies Don’t Eat Catnip! 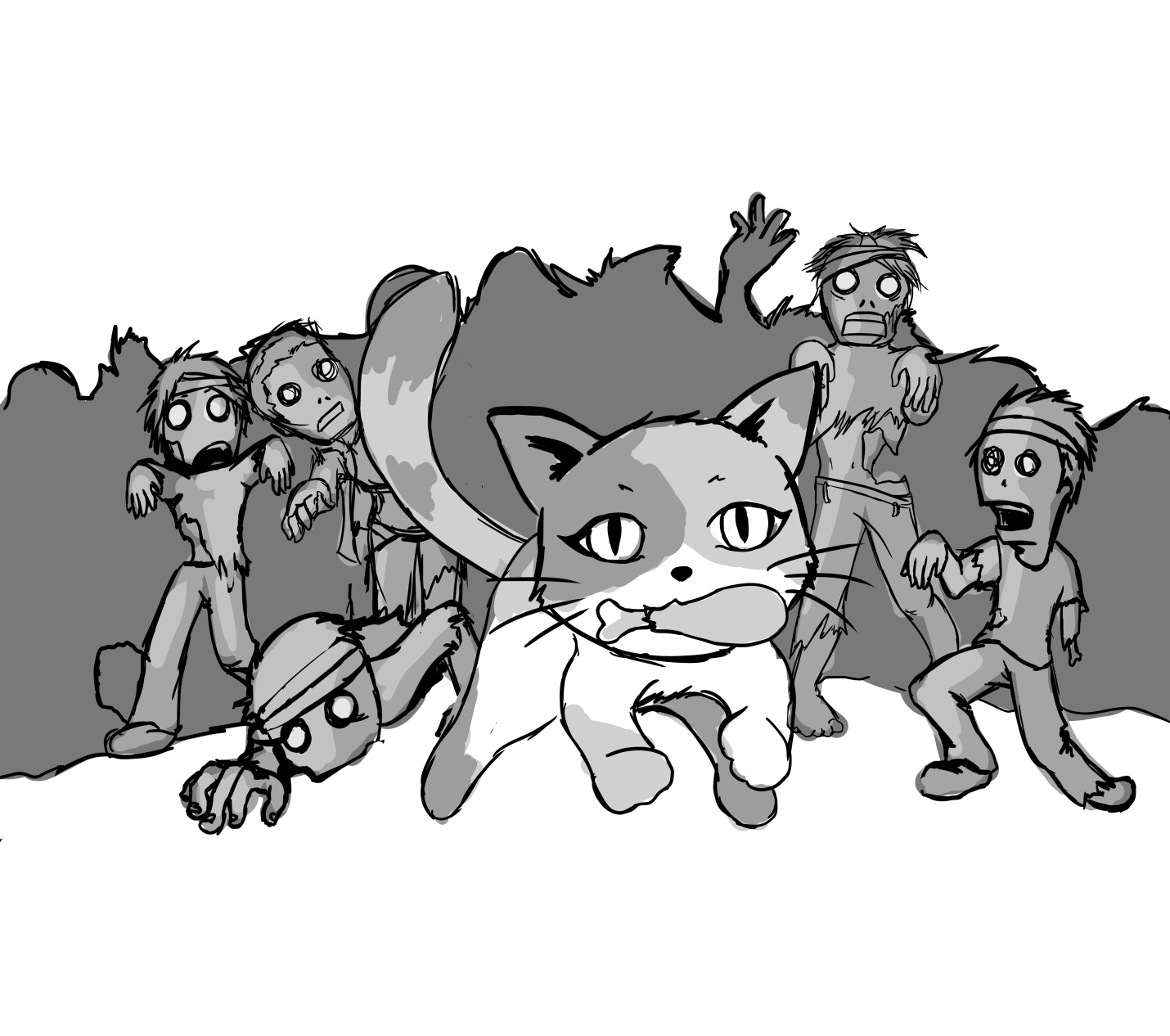 It’s been less than a week since we encountered the first pickled men, but it feels like it’s been years. Just as I had feared, these laughably slow, oozy humans somehow convinced my slightly less slow humans that I’m not allowed to play outside anymore. My harness has been collecting dust, and with all this lounging around, I’m not sure if it even fits anymore. Plus, the birds have been running wild ever since, landing on my lawn all willy nilly with no one to stop them. I tried mewing at Greg to tell him how dire the situation was getting, but he didn’t even flinch.

Just wait until a gang of them poops on his car. Then he’ll appreciate how much I did for him.

Normally, I’d just take matters into my own hands and dash out the door when my humans opened it to leave somewhere. The easiest times were usually as my biggest human left for work or my littlest human left for school, since they always had their hands full and they were too distracted to notice that I had slipped out under their feet in the fraction of a second they had the door open. But days have passed now, and neither one of them has gone anywhere.

On the contrary, Greg has been grabbing whole planks of wood and nailing them over the windows, and he’s been pushing heavy furniture in front of the doors. He’s just making a ruckus everywhere. It must be nice not having exceptional cat hearing, because all I wanted to do was bury my head under a blanket and cover my ears.

Once he finished banging around, he installed something like fifteen different kinds of locks on the front door that my thumb-less paws had zero chance of opening. Not only was all this paranoia blocking my view of the outside, but he made it so I couldn’t even appeal to my littlest human as a voice of reason, since I’m pretty sure she can’t open all those locks either.

Or so I thought. But today, six-year-old Ella Mimsy surprised me. Like most surprises that my humans think will be so great and fun, it was absolutely terrible.

The day started best it could, given the circumstances. I woke up at the foot of my littlest human’s bed. I stretched out, first pushing back into a downward dog pose (which should be called downward cat), then stretching out each of my back legs individually, before shaking each of my feet to get my blood flowing again. I hopped off the bed, and met Greg in the kitchen, who immediately greeted me with pats and a can of food. I walked back and forth between his legs, rubbing up against him to smooth out my bed head, while he got the can open.

Today’s meal was Furrtastic Feast’s Ocean Feast with Shrimp. Furrtastic Feast uses full pieces of shrimp, unlike Meow Meow Medley and Kitty Kuisine. The gravy is just the right amount of sweet and savory to perfectly complement the meatiness of the salmon and whitefish, while the shrimps provide little pops of texture. Oh, it’s my favorite.

But while I was enjoying seafood bliss, my littlest human was getting into trouble. I didn’t see exactly what happened, but I imagine it went something like this:

Ella Mimsy crept to the door. The days of being stuck inside had pushed her over the edge, and her brand new tricycle was sitting there, right in the middle of the yard, at the mercy of Slow Walkers and birds alike. She just wanted to play on it for a couple minutes. A couple minutes. That was all. Surely a tricycle was faster than a slow walker, so what did she really have to fear?

She peeked out the mail slot. The coast was clear. She glanced behind her. No sign of Greg. He was still in the kitchen with me, watching the news on his phone with one half of his attention while washing the dishes with the other. This was her chance.

Ella dragged a chair from the dining room to reach the locks near the top of the door. She could barely reach the highest lock, even on her tippy toes with her arm stretched as far over her head as she could. It took her a couple of well-timed jumps, but eventually she was able to get it free. One down, fourteen more to go.

She slid and turned and separated each lock with relative ease. Most were quick and simple so they could be locked again with the least amount of downtime. The only one she was worried about was the padlock at the bottom. That was the most complicated of them all, needing three numbers and just the right amount of spinning. But she had watched carefully when Greg put in the combination the day before, when he stepped out to get more wood and nails.

I only know this, because she had been petting me at the time, and she was so distracted watching Greg that she accidentally started petting my whole face. Apparently she’s good at memorizing numbers.

She spun the dial one way, then the other, then clicked the last number into place. I heard the “Pop!” from the kitchen as the lock came right off, followed by the sound of Ella cheering semi-silently to herself.

She climbed down from the chair and scooted it away. One more peek out the mail slot. Still clear. She turned the door knob and nudged open the door, one centimeter at a time.

This was about the time that it dawned on me that I might need to go investigate. I meowed at Greg, hoping he’d figure it out, then headed toward the door.

I arrived just in time to see Ella sprinting for her trike. That shiny red frame seemed to be the only thing her eyes could focus on. In one fluid motion, she threw a leg over the black plastic seat and planted her feet on the pedals.

“Ella! What are you doing?!” Greg shouted from behind me. He rushed to the doorway, shouting loudly enough to shake the little human from her tricycle riding trance. His voice was frantic. And I can’t blame him. She was completely oblivious to the Slow Walker just three feet away.

“Get back inside! There’s one right behind you!”

Ella turned her head to look, shrieking when she came face-to-half-rotted face with the undead. The monster had no legs and only one arm. It dragged itself along the lawn at the speed of snail.

My littlest human pumped the pedals on her trike as fast as she could, practically throwing her front wheel into a tree root, and launching herself onto the gardenias. She was too scared to make any decisions that actually made sense, and her flailing and crying had given the Slow Crawler enough time to catch up. Its bruised and decayed claw reached for her ankle and caught her shoe.

Ella screamed again as she tried to shake her leg free. “Help!”

Greg used his much longer human legs to dart to her aid. He yanked her into the air, not bothering to get her shoe back from the offending pickle man, and he rushed back inside.

But because humans aren’t very good at prioritizing, he made the brilliant decision to set her down and make sure she was okay before slamming the door shut. By the time he realized he hadn’t fixed the situation at all, a zombie had already made it through the doorway.

“Hide, Ella!” My biggest human yelled. His eyes darted around the room, trying to find some weapon to fight off the creature. He was shaking, his pupils dilated, and his mind so panicked, he didn’t see what was right in front of his face. The little human started sobbing. I just heaved a sigh.

I was perched atop the highest shelf, using the higher ground, as everyone should be in a combat situation. Not that I expect humans to understand the first thing about combat. From there, I gave my ceramic flower pot full of cat grass a good hard kick and knocked it over the edge of the shelf. I took an elongated stretch while the pot of grass spiraled down onto the Slow Crawler below me. Its stupid head got smashed like a bug, though not without shattering the pot and ruining all of my cat grass. 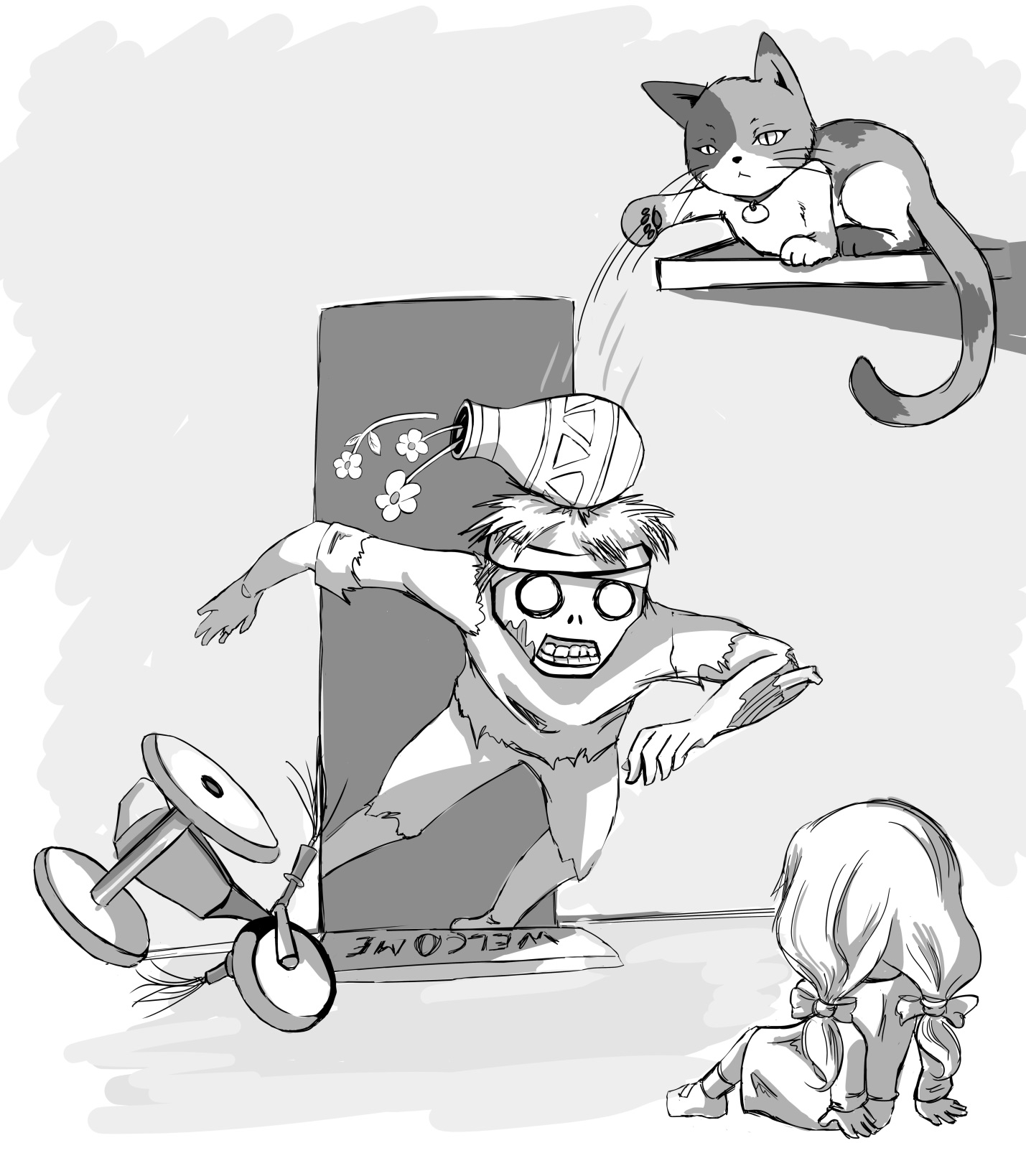 The grotesque thing stopped moving. From its one hand to its non-existent toes, it was completely still, no longer messing up the welcome mat or getting goo on my slippy, slidey hardwood floor.

I hopped off my shelf, covering eight feet to the ground and landing on my feet, then I swatted the undead human with my claw to make sure he was just regular dead now.

My humans just watched, as if they expected me to do the cleanup, too. I shook my head and sat by the door, tapping my tail impatiently.

Feel free to close the door at any time, humans. I mewed sarcastically. No rush or anything! It’s not like there’s an army of slow walkers out there waiting to come inside and steal my chicken and liver.

Greg Mimsy finally got the hint. Too stunned to say a word, he used his bat to push the rancid creature back outside, shut the door, locked all the locks, and went to the kitchen in a trance, hopefully to get me some cat treats.

“About time.” I meowed. Though my humans couldn’t understand me. Clearly they couldn’t understand how to survive a zombie apocalypse either. Actually, I was still amazed they had survived regular life long enough to even get to the end of the world. It must be tough to be born without reflexes and cunning. Though it was also tough to not have the thumbs to operate the can opener for my food, so it would be nice if they’d at least try to take care of themselves sometimes. Protecting my food source from their own foolishness had become a full time job.

But what can you do? A cat’s work is never done. 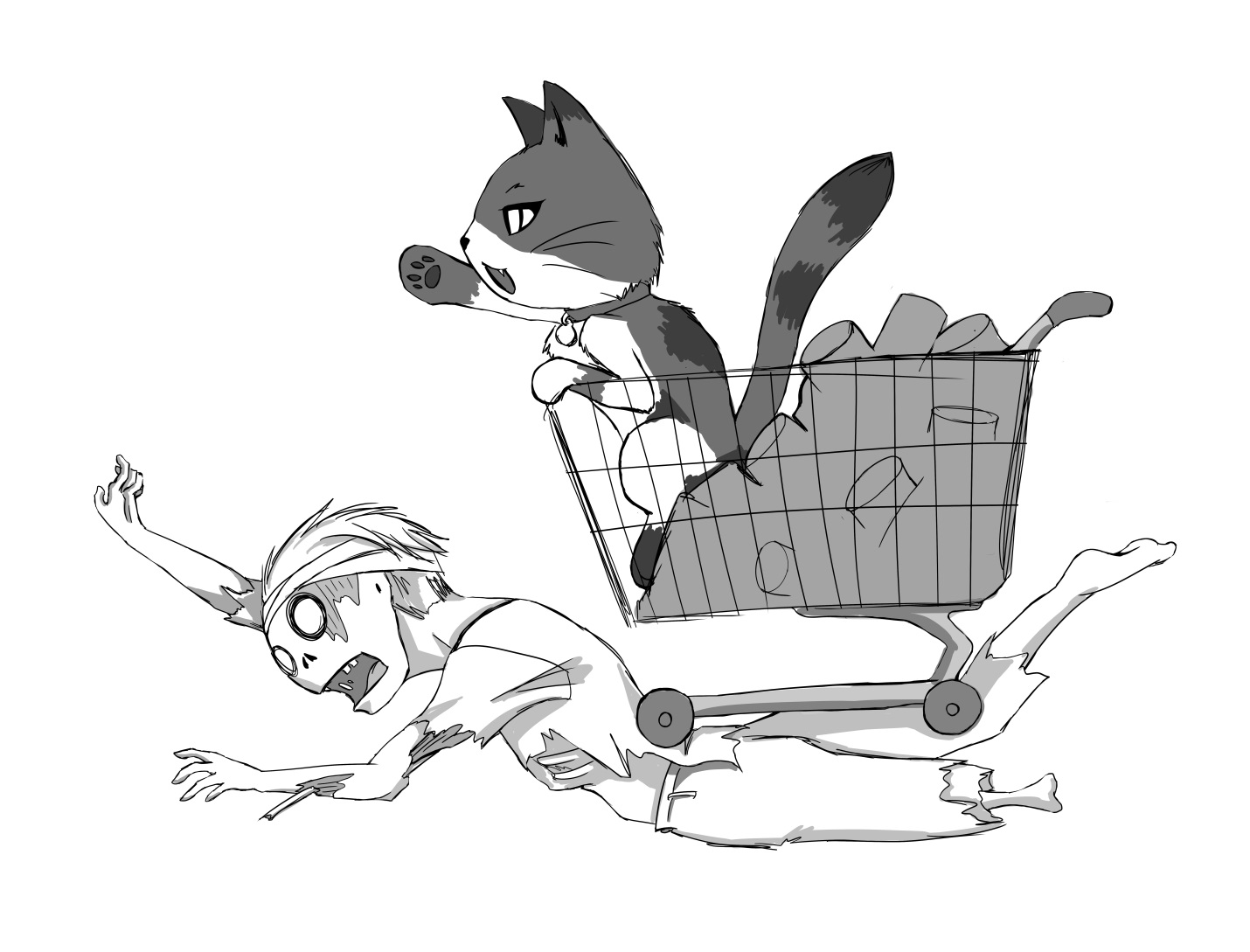 Zombies Don’t Eat Catnip is available now through most retailers!