So you’ve had a cat for a while now, and you’re looking to expand your menagerie – perhaps in a reptilian direction. You’ve heard that bearded dragons are a great beginner lizard – and they are!

They may even be especially suited to cat owners, because beardies and cats have several behavioral similarities that will make cat owners chuckle to themselves when they compare their two seemingly very different pets.

If you’ve ever spent hours searching for your feline friend, only to find out they’d been curled up in the pile of old clothes in the back of your closet the whole time or were lurking on top of your kitchen cabinets, you’re already well-acquainted with the mindset of the bearded dragon.

Like cats, beardies are both predators and prey in the wild, so they have similar instincts – to hide in dark spaces so other animals can’t see them, and to seek the high ground so they can see everything around them.

Having shady spots in their enclosure also helps beardies regulate their body temperature, so you want to simulate their natural habitat – the arid semi-desert areas of Australia – with rocks, branches, and other furniture they can climb on and shelter under. 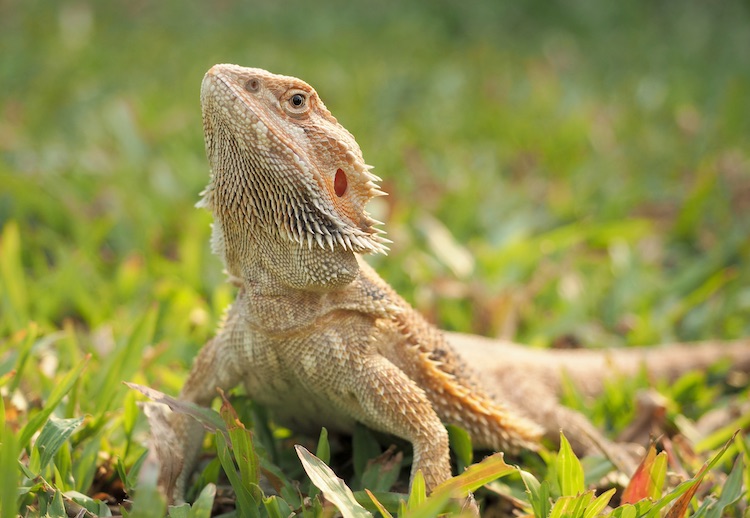 Unlike cats, beardies are omnivorous, and an adult bearded dragon should have a diet of about 75 percent fresh vegetables. However, the other 25 percent is live insects, like crickets or mealworms, “gut-loaded” with extra nutrients.

As a cat owner, you’ve probably already seen your pet devour live animals, and they usually just do it for fun, and then leave you to clean up the mess.

Beardies actually eat their prey – then poop it out and leave you to clean up that mess, too. So maybe they’re actually exactly like cats in the respect. Either way, owning a fierce and furry predator will hopefully ease the transition to owning a fierce and scaly one, and switching from kibble and canned food, with the occasional mouse or vole, to daily live cricket feedings.

While you might find it frustrating that your cat likes to spend all morning luxuriating in the sunbeam that falls right in the middle of your kitchen floor, your bearded dragon will find it eminently relatable.

Like most reptiles, beardies are cold-blooded, which means they need to bask in the sun to keep their body temperature up, then retreat to the shade to bring it down again.

As an added bonus, because beardies live in terrariums, they’ll stay out of the middle of your kitchen floor and instead use a basking lamp and a comfy rock in their enclosure to catch those rays. 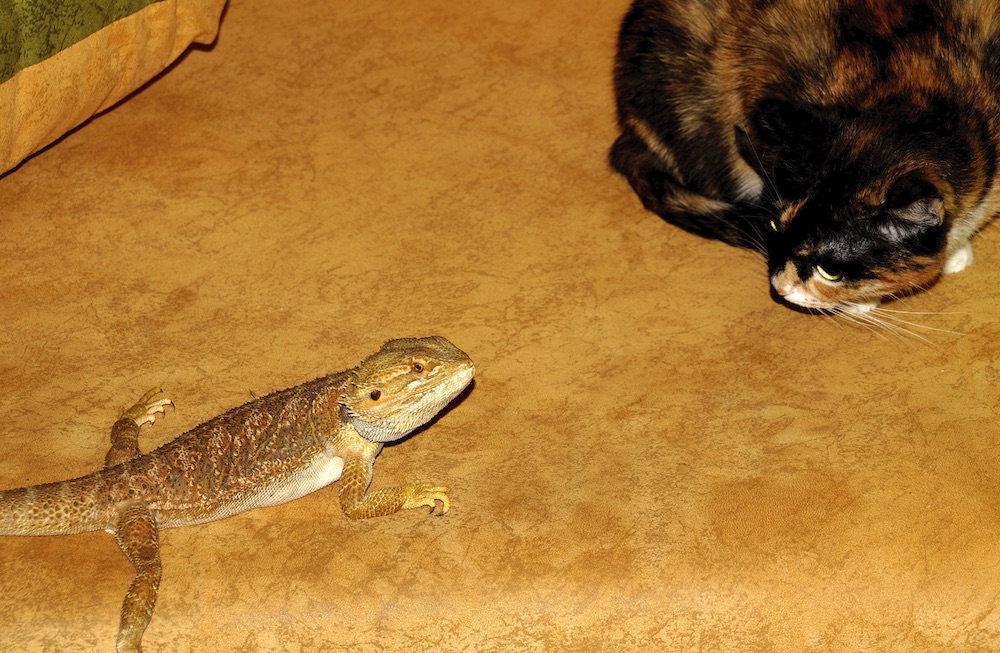 While self-proclaimed “dog people” might tell you they don’t like cats because they don’t care if you’re home or not, these people are a.) wrong about how affectionate cats really are, and b.) ignoring the fact that one of the major appeals of owning a cat is that they’re emotionally low-maintenance.

They absolutely enjoy human interaction (most often when you’re working on something important), but also thrive on alone time.

Beardies are much the same.

They generally like handling and can even be acclimated to riding around on your shoulder, but they still like to be left alone a lot of the time. When you do handle your beardie, make sure to wash your hands both before and after, to help prevent the spread of bacteria, and to hold them flat, supporting all four of their feet.

If you’ve ever lived in a multi-cat household, you know that feline housemates are not always the best of friends.

They might eat each other’s food or fight over the best boxes and nap places – fights which can range from the playful to the genuinely aggressive and dangerous. Bearded dragons, too, don’t always play well with others.

While beardies are generally friendly and docile with humans, they engage in aggressive social behavior in the wild, such as challenging or even fighting one another over food – and unlike cats, they don’t alternate between fighting and cuddling or benefit from socializing and playing with other beardies.

For this reason, beardies should generally not be housed together in captivity, as they will replicate these social structures and could end up injuring each other.