I’m sure most cat owners wonder what their cats get up to when they are home alone. I certainly do! Sometimes I find evidence he’s been playing as there are toys all over the room, other days I find no evidence of any activity whatsoever, apart from eating 😉

For everyone who is tempted to get a camera to keep an eye on their cats, I can recommend the Ezviz C1C camera. I tested version with the 1080 pixel camera (they also have version with a 720 pixel camera) which gives you a 130 degree view and super sharp images!

I won’t get into too much technical detail, you can find those here. Instead, let me tell you about my experience with the camera and why I think it could be useful – as well as fun – for cat owners. And for UK stockists please click here. 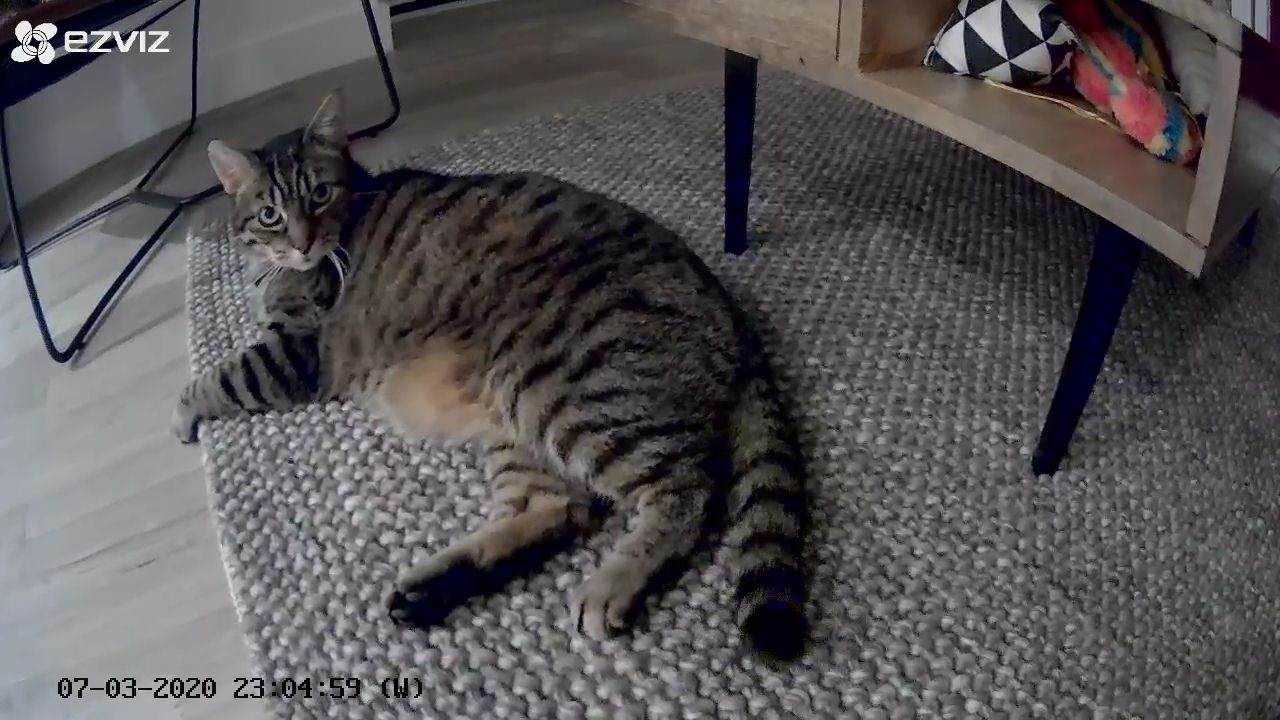 Set up of the camera and the app is really very easy and after that you can place the camera wherever you want. It has a long cable and also comes with a magnetic mounting kit, which make it easy to fix to a wall, bookcase, cupboard or the ceiling. Once you’ve done that, the fun can begin!

Being a novice with this type of cameras, I was really amazed by how sharp the video is and how much of the room you can see. In fact, I cropped some of the images for privacy reason 😉
The app is very user friendly and I found it very intuitive to use.

What is this thing??

With this camera you can also talk to your cat. This is more fun for us than for the cat I image… The first few times I did this Dirk was intrigued and went over to check out the camera. However, after a few times he only moved his head or ignored it altogether. So it’s a fun feature, but after testing it a few times I no longer really use it. This feature is more useful if you’d use the camera to talk to people as it is a two-way feature.

For me, I found it fun to use this camera and that is a good enough reason in itself! If you want to know how your cat is doing while you’re at work you open the app to look at the live feed. If he’s not active at the moment, but has been active while you weren’t looking then you can have a look at the video clips that have been saved. And the camera automatically goes to infrared night vision when there’s little light. Even in night vision mode the images are very sharp. 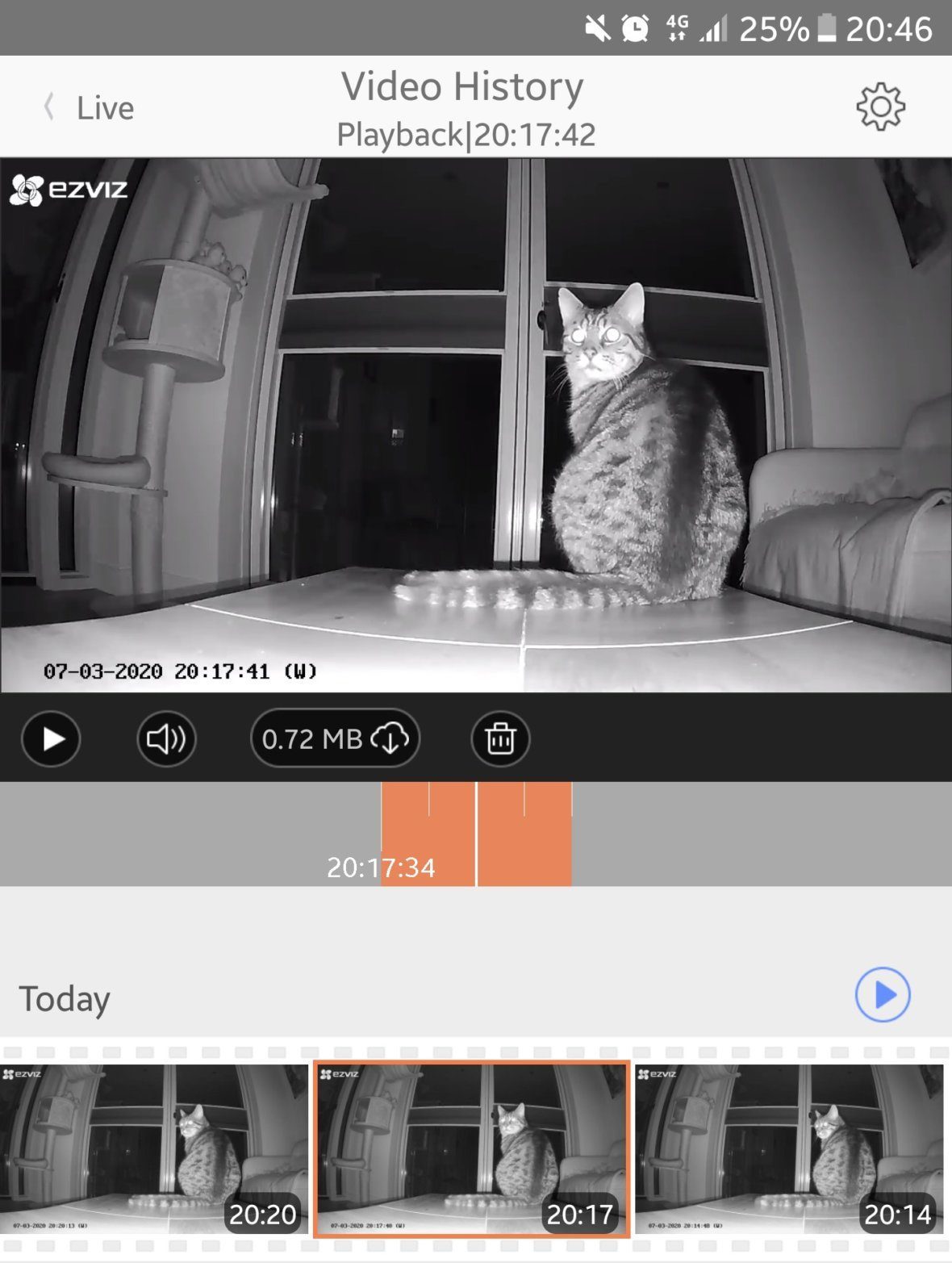 If you want to save video data you either need a micro SD card or you can sign up to use the Ezviz cloud.

However, this camera can also be genuinely useful. I am a cat behaviourist and I could imagine using this camera in a few situations.

For example, if your cat is no longer using its litter tray (and the vet cannot find a medical reason for this!) then you can set up the camera to monitor how the cat is behaving new their litter tray and how it is behaving prior to peeing or pooping somewhere else.

If your cat has separation anxiety, you can see how long this actually lasts. It’s horrible for us to leave the home while hearing the cat howl. You might feel guilty and worry the cat is feeling anxious all day. However, the camera might show you that the cat settles down again after a few minutes.

It can also be useful if you have more than one cat and there are some problems between them. We don’t know what happens when they are away and the cats might behave differently when we are home. At some point growing up, we had two cats named Boris and Binky. Boris was the dominant one and would chase Binky away or pick a fight. However, one night we discovered that at night Binky was actually the one in charge. This just goes to show that if your cats don’t get along it’s not always easy to see which one is being dominant and which one is the ‘victim’. If you monitor them with a camera while you are away you get a much clearer picture – no pun intended – of which cats shows what behaviour and how they interact when home alone.

Some cats live near a ‘neighbourhood bully’. If you have a camera you can keep an eye on cats visiting your garden or. If your cat has outdoor access as well you can keep an eye on their interactions with other cats. If you want to, you can activate a motion detection alarm which will tell you if someone is moving in the garden. I can imagine that the two-way audio feature could come in handy here: if you notice another cat is about to attack your cat then a sudden sound might startle it enough to run away. However, cats have territorial disputes, this is part of their behaviour. If you don’t want your cat to roam around the neighbourhood or other cats to visit your garden then install a fencing system (such as the ones from ProtectaPet).

Those are just a few examples of cases is which having a camera may be useful. Let’s be honest, for the most part it is fun. We all love seeing pictures or videos of our pets when we are away, we wonder what they get up to and most of us really miss them when we’re not home. I loved watching Dirk have his crazy 5 minutes on camera. For the most part though, it just confirmed that Dirk is basically asleep between 9am and 4 pm 😉