Sweet Nezumi, queen calico and loyal fur-daughter, has passed from the mortal realm.

In other stories about her, I’ve told how she found us as a tiny injured kitten who was driven away by her mother and how she quickly became a surrogate daughter to my spouse and I.  I’ve told how she grew into a fine figure of a queen cat, nurtured by the loyal Orion.  I’ve also told of how we lost Orion to Valley Fever and how Nezumi carried on his duties by herself.  She even wrote a few entries on my blog, Mindflight.  She was a wonderful girl, a staunch family member, often hilarious, and always lovable.  She liked to eat lettuce and pull the stems off of cherries.  Lately, her health has been failing and we’ve finally lost our final battle. 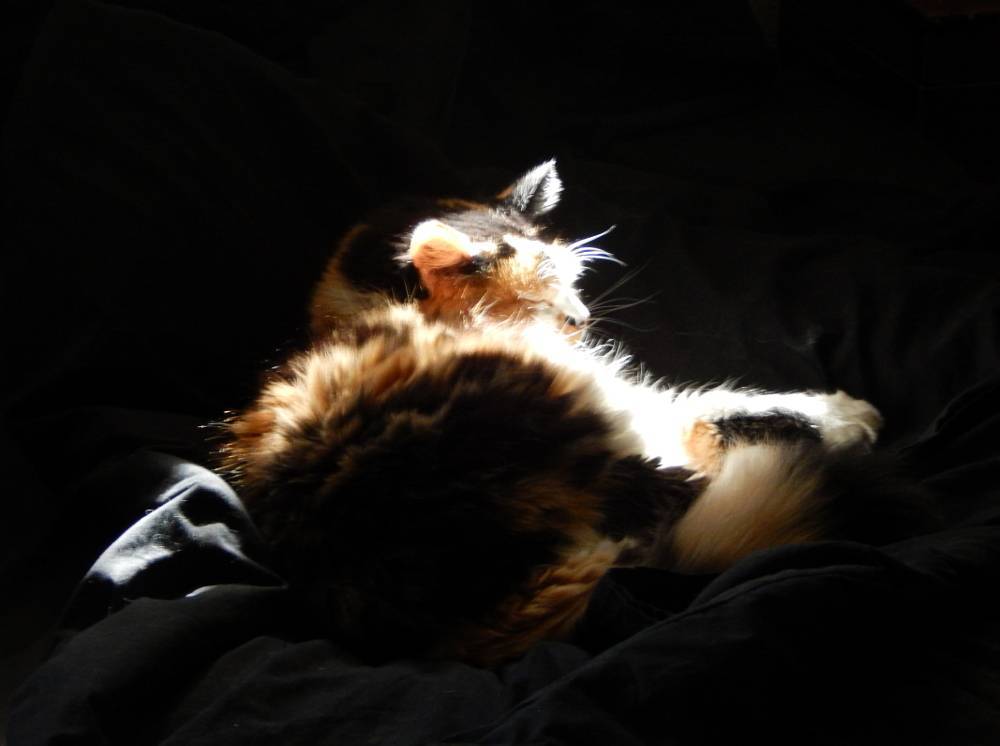 It started a few months ago when she started becoming even pickier than usual and we thought there was a problem with her mouth.  She started drooling and rubbing her mouth on things, so it made sense.  We also wondered if she had a hairball that wouldn’t come up.  We decided to take her to the vet after she didn’t perk up, the way she always had before.

Our kind vet, Doctor Strickland, found a mass near her intestines, but since it wasn’t blocking anything we thought she might be okay.  Perhaps the mass would be benign, perhaps we could encourage her to eat, perhaps we could control the swelling with steroids and find out it was just IBD.  We did blood work, got good news on her organ function.  She was put on some anti-inflammatory medication and something else to control nausea.  Since Nezumi’s teeth looked good, the theory was that nausea was preventing her from eating.  I love our vet office, by the way.  They let Nezumi walk around inside the exam room, sniff everything, and have always been gentle with their exams.   They also listen to our concerns and are responsive to the fact that we know more about medicine than the average pet parent.

In any case, we got a bit of a reprieve – for a time she seemed to be getting better.  Then she took a turn for the worse.  She stopped eating again and fought tooth and nail when we tried to syringe food down her.  Back to the vet.  The news was bad, likely large cell lymphoma that was by its very nature inoperable.  So we changed our strategy and just focused on keeping her comfortable.  That meant daily injections and transdermal opiates.  Nezumi tolerated the injections far better than she ever had tolerated a pill.  Even with all this care, Nezumi went from around twelve pounds to a mere five and a half.  I wrote an article about how to coax cats to eat, since I’d had to try so many things with her.

A couple weeks passed.  Nezumi’s normal meow changed to a little squawk, she lost her coordination, and she wasn’t able to jump up on the couch anymore.  Still, she loved attention and would ask to be picked up so she could be near us.  Then she’d paw me every time my attention started to falter.  She loved being brushed, too.   I still saw a soul behind her eyes.  Normally so gentle, she covered my arms and hands with inadvertent scratches.  As I look at the webwork of scabs, I find now that I want to rub ink into them so I can wear them forever.  Her sweet face and personality created instant love from the first moment I saw her as a tiny waiflike kitten.  Her pawprints will forever be found on my heart. 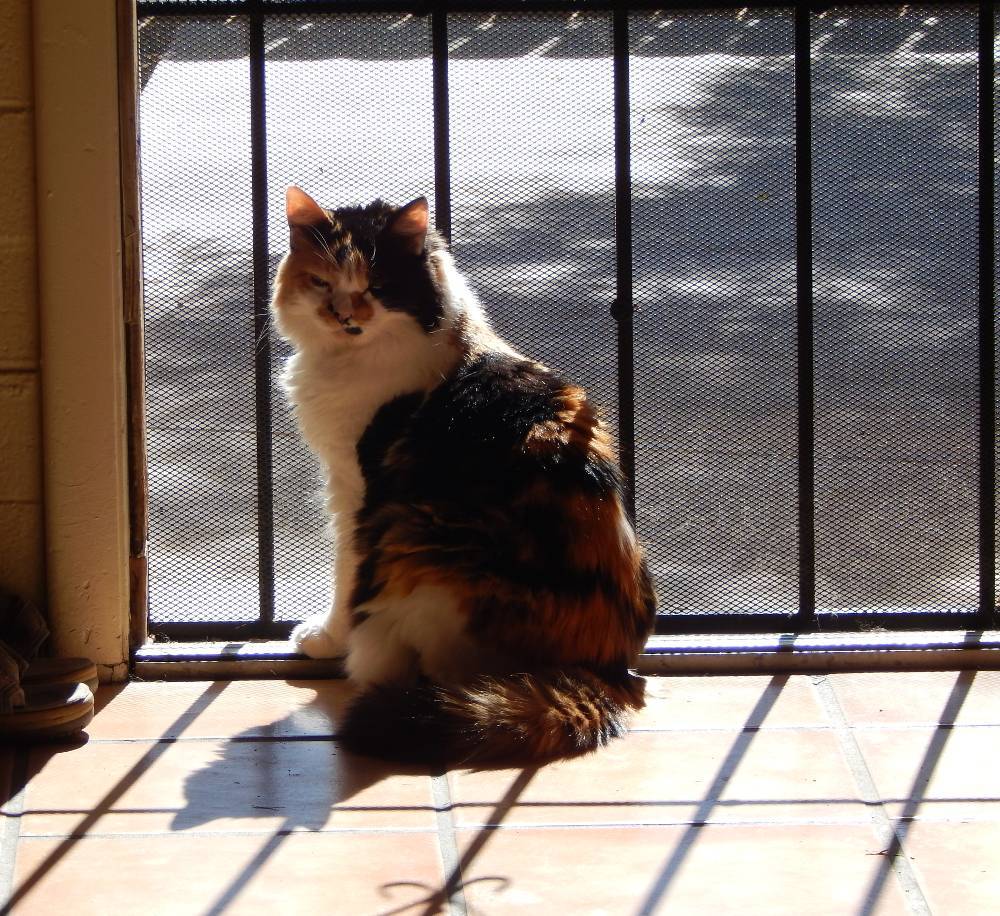 That was why it was so hard to have to schedule her end – however, my spouse and I agreed that she should go when she still had some dignity left, instead of us selfishly trying to eke out the last drops of life until she passed away in pain and terror, no doubt on a weekend when we wouldn’t be able to get her help.  So, even though it seemed cold and unnatural, I also scheduled an appointment with a crematorium for shortly after her last vet visit.

I had to take a Benadryl on her last night so I could sleep, and still sat up petting her.  My tears were a river that has still not run dry.  In the morning I gave her some brushing, which she loves, and offered her chicken broth for breakfast – normally her favorite – which she wouldn’t touch.  Instead, she kept patting me and looking into my eyes.   Her poor thin face reminded me so much of when we’d first met, just about thirteen years ago.  I brushed her one more time, something she enjoys.  I thanked her for being such a good girl, and for having given me such joy.  I told her that while her soul would always be welcome with us, if she wanted to leave I’d let her go with my love.  I told her to find Orion since he’d show her the way.

When it was time we loaded her in the carrier and took her back to Doctor Strickland.  The assistant laid Nezumi on a blue and white Southwestern blanket to make her comfortable.  The vet gave her one more exam to make sure nothing had improved, and then the venous catheter was placed and we said goodbye.  Shortly after, Nezumi was gone.  I felt a cool wind blow through me, around that time, though for the life of me I can’t remember exactly when.  After a few more minutes we took her body away and laid it, ever so gently, in the back of the car.  I’ve never driven a hearse before but that was what it felt like.

The people at Tucson Pet Cemetery were very kind. The office lady was quiet yet compassionate, neither adding nor detracting from our grief.  The office cat, a fat, bob-tailed Cymric cat, offered cuddles, headbonks, and purring.  The office lady went over the options with us, not trying to upsell but just responding to our questions.   We placed Nezumi on a sort of table under a window, in a shaded room with comfortable chairs so we could say our final farewells.  Then we left her husk behind.

I find that as sad as this all was, in fact, our hearts are truly breaking, I couldn’t ask for a better end myself.  I hope that when the time for my end comes, I can meet it in peace, with my family around me.  We’ll make a place in the yard for her ashes and set up a cat statue in her memory.  I know that she’s beyond all pain now, and I hope she’s met up with Orion so he can show her the ropes of being a spirit being. 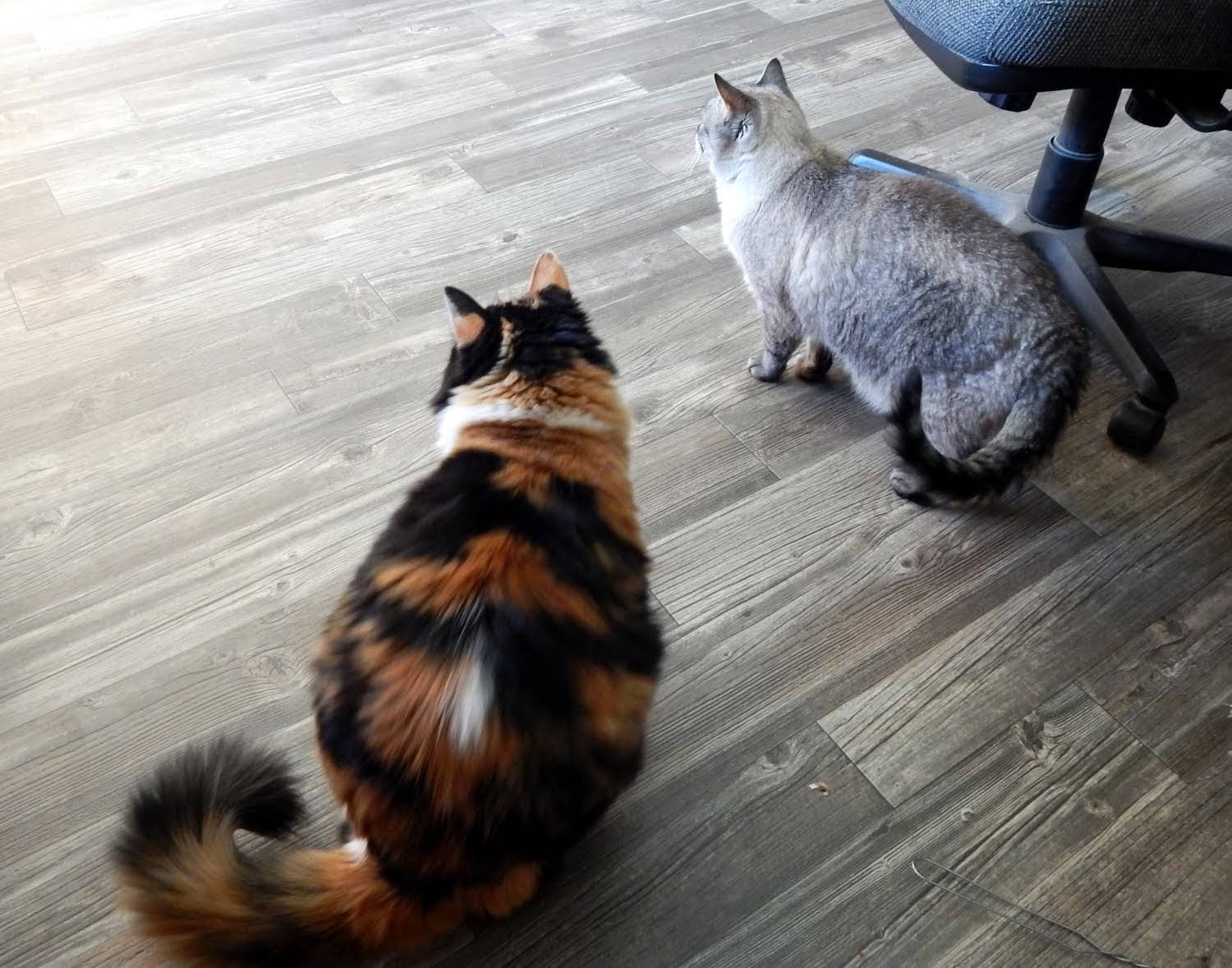 For now, we’ll comfort Shinji as he’s an only cat, yet again.  He’s seen a lot of people die and so we want to be gentle with him.

when I feel you’re gone,

my heart pours out misogi

Other stories of Nezumi can be found here and also at https://mind-flight.org.

27 thoughts on “A Tribute to Nezumi, Queen Calico and Loyal Fur-Daughter”