Two Moroccan Road Trip Kittens, and an Amazing Blind cat Beauty are Looking for Homes in the UK

We finally had the paperwork. 4 kittens and a blind cat had passed their Moroccan government health checks. Their microchips, and vaccinations, blood tests and a clean bill of health were all in place – it had been a long journey but there was a still a far longer one to come.

Such was the case for Beauty, who was found with severe eye infections and is blind, Foxy, abandoned at 3 weeks old alone in the medina, Zien and Zweena, dumped like rubbish on the tip, and Sabine, who was found at 5 weeks old, being devoured by parasites.

After a few hours at the ONSAA veterinary offices in El Jadida, Beauty sat comfortably in his Sleepypod, the 4 kittens in their cages, and 5 bills of health were in my hands. We were relieved at the sight of them as a few days later we were to embark on an 1800 mile road trip to transport the kittens to the UK in order to find them permanent loving homes through the work of Catfest which was sponsored by Agria Pet Insurance this year. 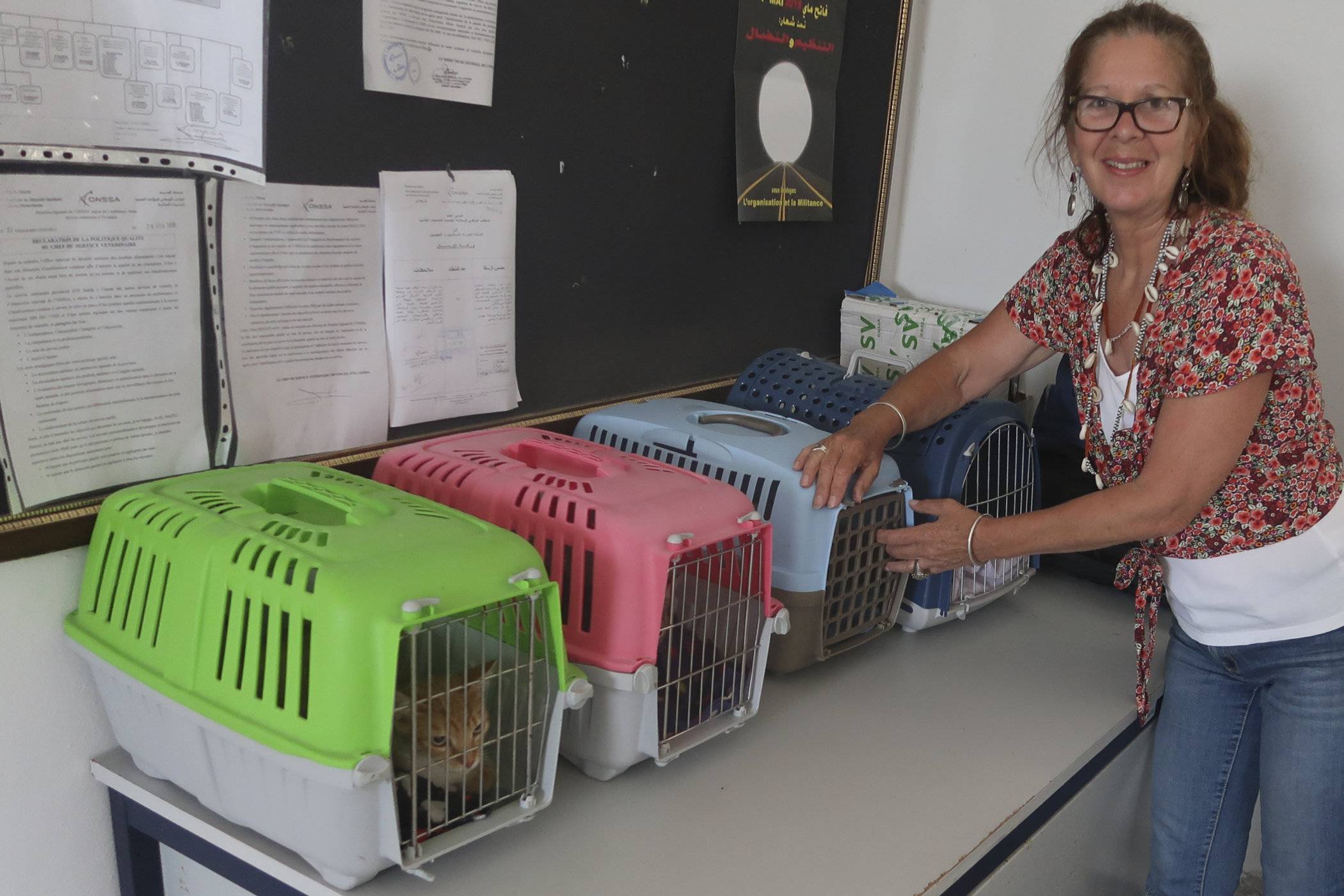 The kittens had been fostered by the wonderful Zahra while the necessary UK entry requirements were attended to. On the 22nd June 2019, she helped us load the cats into the car, shed a tear and waved them goodbye. Eilir, my trusted co-pilot for the journey and I had no idea what lay ahead. How would the cats be? Could we manage the long hours of road travel? Would people along the way be helpful? And most importantly…. have we got the paperwork right!! These questions had no answers, so we set off with plenty of hope that things would be fine, and if things became difficult, we capable women could sort it! 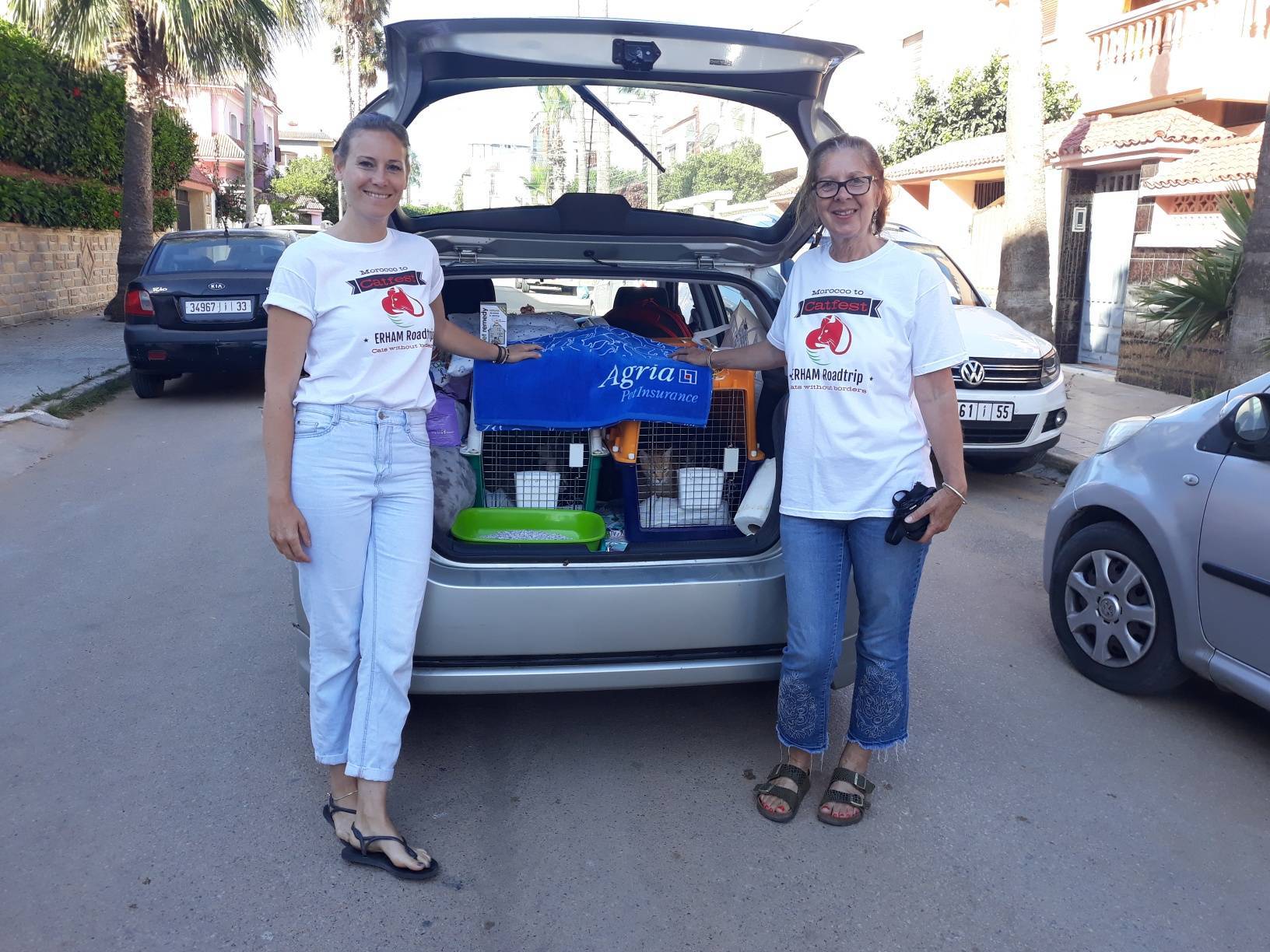 We drove the 280 miles from Azemmour to Tangier in 5 hours, and were virtually jumped on by people selling tickets for the ferry boat to Spain. Luckily we manage to catch the next ferry which was leaving 20 mins after our arrival, but not before all life forms were taken from the car while it was laser scanned. On the sea crossing from Morocco to Spain, the trip suddenly felt very real – these poor kittens, would mostly likely have died had we not rescued them. Now they were on their way to new lives in the UK.

Passing through customs into Tarifa Spain, was the first time we had to put our paperwork to test. The official was amused to find we were importing 5 cats and enquired as to my marital status. We roared with laughter when he suggested that perhaps I should get married!

One of the best things about this road trip was that each night we managed to find friends along the way who were able to offer us a bed, and weren’t put off by the thought of 5 cats in tow! We settled into Tarifa by early evening and the cats excitedly explored my friends home. 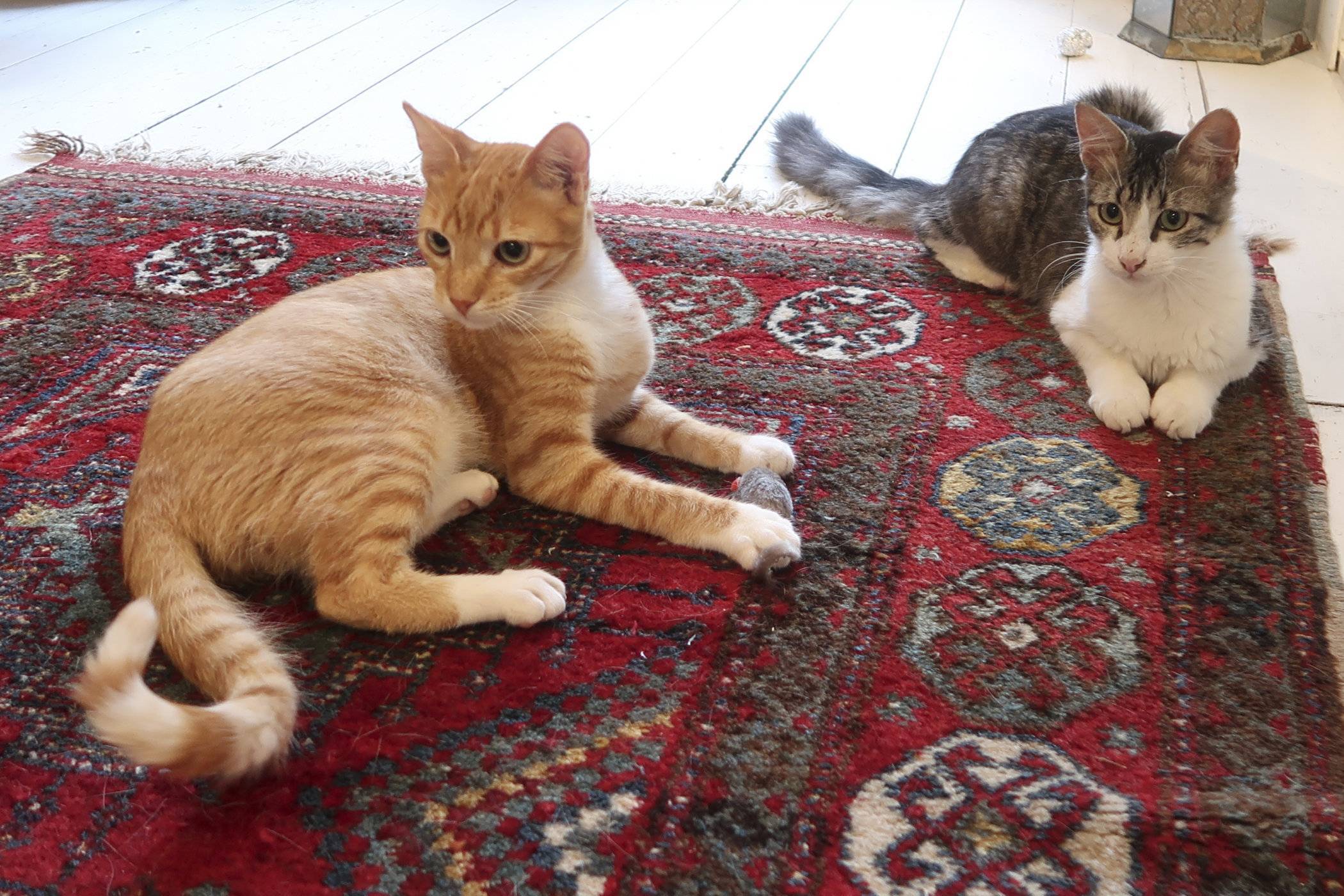 The following day after rounding up the cats and persuading them back into their travel cages, we had a 450 mile drive to the Valley of Cherries! The cats were travelling quite well, but Beauty was a star! He didn’t like to stay in his Sleepypod all the time (although he loved it) but preferred to sit in-between us in the back, so we started to make a bed for him there and he was so content we’d often find him treading and purring.

We were welcomed into the home of Carmen and Rocio, (friends of friends) with armfuls of cherries which we were instructed to eat…. eat! The cats had a huge garage to run around in, which was already prepared with litter trays., food, water and toys and they were thankful to be able to get rid of some of their full-on kitten energy! We were then treated to a historic walk around the village and a trip to the cherry orchard where we picked cherries to take with us the next day. Such kindness of strangers!

An early start the next day as we had 660 miles to drive, to another friends delightful home in central France. In the evening we sat in the garden with wine and food, watching Beauty confidently explore the garden until he feared he might be alone, then he yelled at me for reassurance and to guide him back to his Sleepypod.

The long and tiring drives were coming to an end on the 4th day – we were heading for Calais and the final and most important test of our preparations to bring the cats from Morocco, a high-risk rabies country and a non-participating country for the Pet Passport system, to the UK. We knew they would be strict, had heard stories of failure, and I must admit I was feeling rather nervous when we entered the Pet Reception at Eurotunnel. I kept hearing no, no, but quickly realised that one of the staff was in training and the no’s weren’t being directed at our paperwork! 15 nail-biting minutes later, we were delivered our papers back with our 5 cats on board official sticker and I nearly cried. 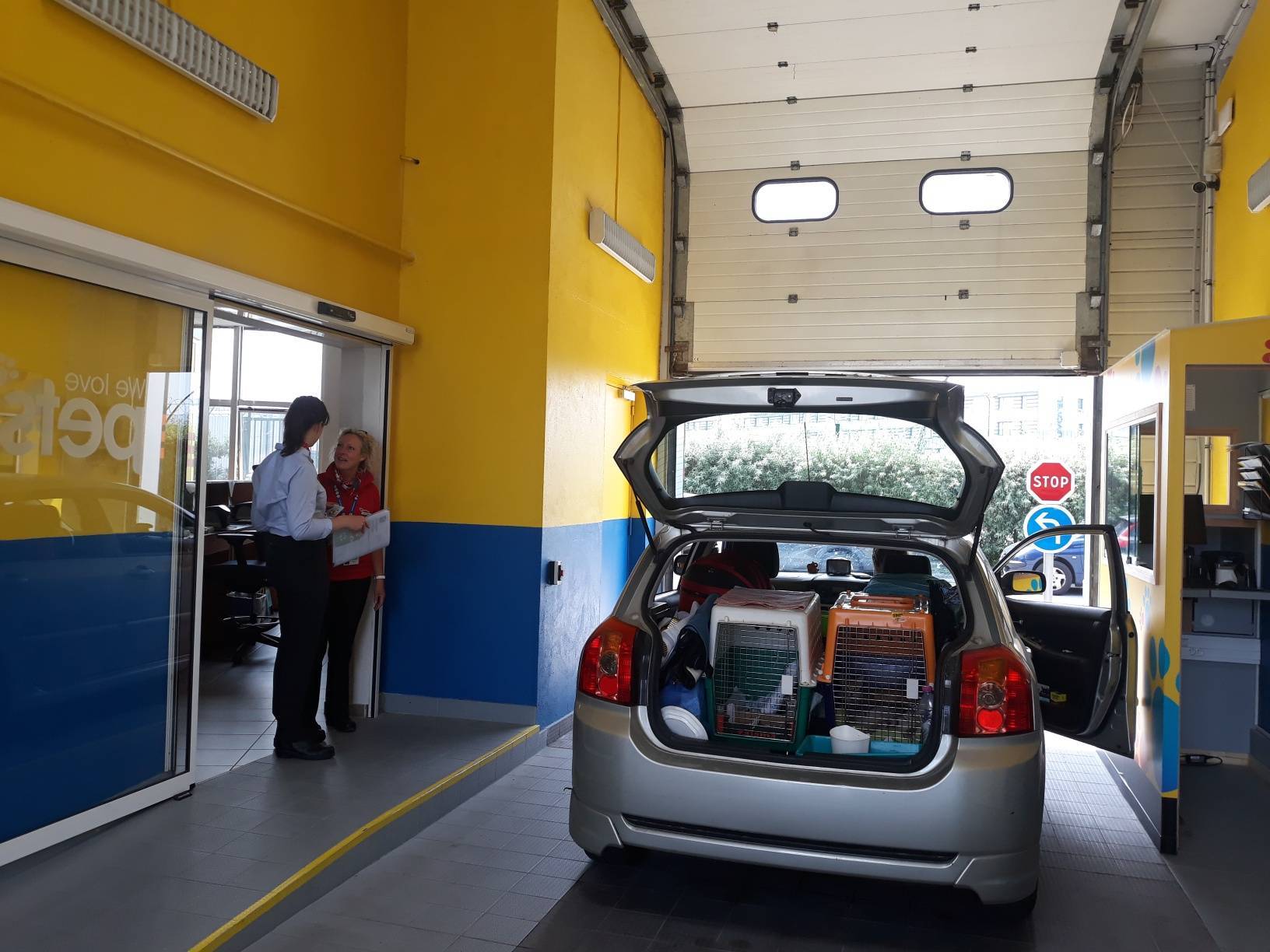 Home in London, the cats were very happy to be released from their cages and welcomed (well sort of) into my home by my resident cats Sabi and Pickle.

This was an amazing trip; long, tiring and expensive, but will be remembered with great fondness for the people who helped us along our way. For these little kittens this journey means life and that makes every struggle, every hardship and every penny spent worthwhile because their lives are priceless.

2 kittens, Sabine and Zien have already been adopted and are currently charming their new owners and cat buddies. Foxy and Zweena had also been spoken for but a change in the adopters circumstances means that they are again available for adoption. Beauty, who is blind is still looking for his perfect home, which would include lots of affection and a secure garden, where he loves to spend his time. He would also love to be reunited with his best friend Shadow who is still in Morocco awaiting paperwork to travel. 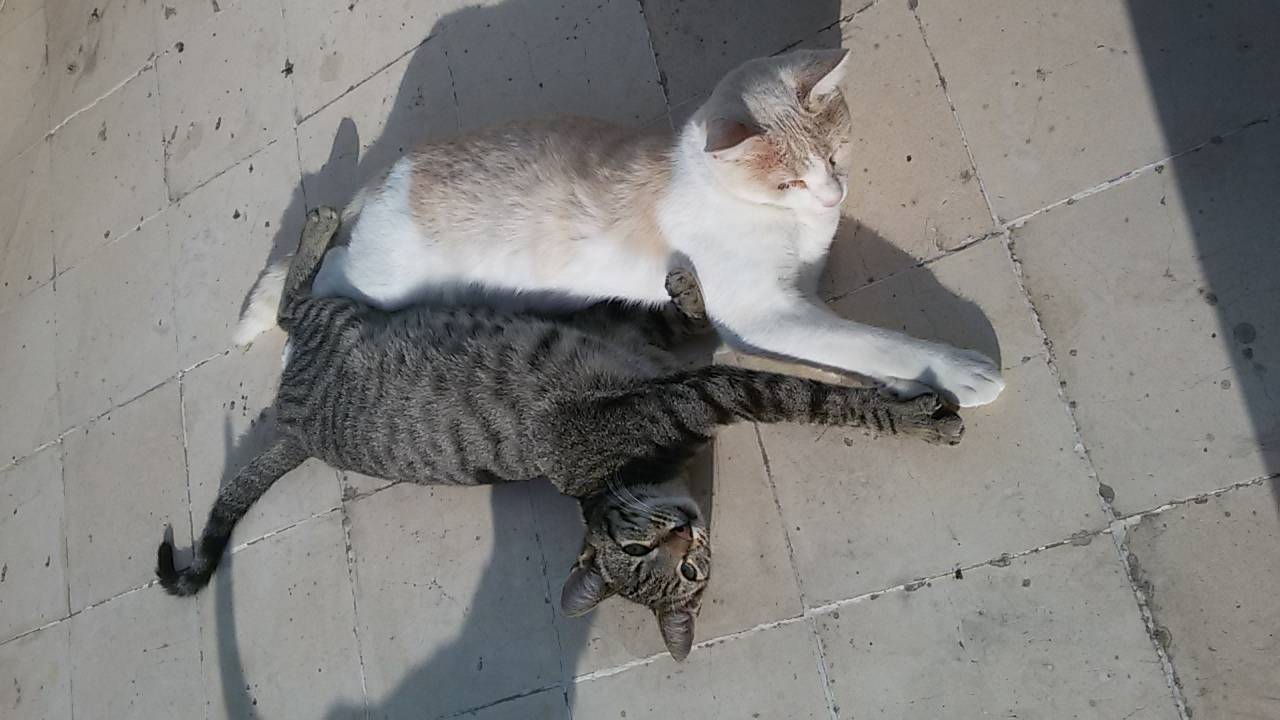 These were the lucky kittens who had been rescued but many more remained on the rubbish tip and need our support.

You can help by donating here: www.justgiving.com/crowdfunding/erham

4 thoughts on “Two Moroccan Road Trip Kittens, and an Amazing Blind cat Beauty are Looking for Homes in the UK”