Warning – This post contains visual images & a video of suffering kittens that may not suitable for everyone.

I’m watching an emaciated kitten desperately trying to find the last drop of oil at the bottom of an empty sardine can. It seems too young to be away from its mother. I see another – it’s eyes swollen and infected – a known complication of cat flu. Suddenly cats and kittens are everywhere – all running in the same direction towards a lady carrying a bag of what turns out to be fish heads – Fatima has arrived and the cats are hungry.

That was a few years ago when the determined Fatima seemed to be coping with the many kittens that were heartlessly abandoned on the rubbish tip without food or water; left to their peril. She constructed cardboard box shelters for them and fed them with whatever she could find – mostly couscous, fish heads and milk. I watched her tear open plastic bags containing left over food that people had thrown towards, but not into the rubbish bins, so the cats and kittens could more easily scavenge for anything edible inside.

We became friends, and sometimes in the early morning I would go with her on her cat feeding rounds. Once she’d fed and cared for the rubbish tip cats, she would walk to her sisters house for tea, met on every corner by expectant hungry cats and kittens; her routine having become familiar to them.

Back in Azemmour 2 weeks ago, having heard that Fatima’s beloved husband had recently died, I went to the rubbish tip to find her and offer my condolences. She was clearly changed and utterly overwhelmed with the amount of vulnerable kittens that had recently been dumped there. There were approximately 60 of them. Two were disabled, some were and under 4 weeks old and motherless, many were sick. There were also 4 corpses. It’s was utterly heartbreaking and Fatima was desperate for help.

Over the next few days I took food for the kittens to the dump and alerted my cat loving friends to the crisis. Most of them were members of ERHAM  (Arabic for ‘take pity’) which is a small Moroccan based charity I founded a year ago. ERHAM has started to tackle the overpopulation of cats and the subsequent suffering of unwanted kittens by offering a free sterilisation program, but it will take a few more years to have the impact needed.

We arranged a ‘clean up’ day shortly after I’d witnessed the crisis. Fatima and ERHAM collected the abandoned kittens into boxes, helped by many local children, and we treated them for parasites and fleas. The sick ones who were kept separately washed infected eyes, often revealing perfect and applied antibiotic eye cream, and the tiny ones were fed with kitten replacement milk. Many of the kittens had been separated from their mothers far too young – some just 3 weeks old – and stand little chance of survival without the nourishment and antibodies present in their mothers milk.  94 kittens were cared for that day.

While we had the kittens under our control we cleaned the area they lived and constructed a 3×3 meter concrete slab, with a tiled area for feeding. We also replaced the old boxes with new plastic covered waterproof homes.

At first we had quite a few loud objections from local people who believed we wanted to encourage others to leave kittens there. But when we hung our banner which read that being cruel to animals was ‘Haram’ (meaning shameful and forbidden behaviour) attitudes seemed to change. The banner also alerted people to ERHAM’s free sterilisation programme.

It made little difference though. Over the next week, more and more kittens arrived; frightened, unwanted and some already sick. Nursing mothers were dumped too and were soon overburdened with more abandoned tiny mouths to feed along with their own kittens.

It filled me with sadness to see new dumped kittens who arrived in good condition being exposed to the viruses carried by the sick ones. Bacterial infections were also a big possibility from the rotting food in the festering rubbish pile on the other side of the tip. We tried to home the kittens as soon as they arrived but it quickly became clear it was an impossible task.

Mustapha, a friend who lives nearby in a small house with enclosed land offered to take 10 kittens into his garden with the hope of finding homes for them in his local community. He now has 19 and counting while his own cat sits on the wall refusing to come home. Another local lady took 4 kittens onto her roof terrace. Occasionally people came to the tip to adopt which was amazing given that most people won’t even come near it.

It’s hard to imagine that people could put the lives of these innocent vulnerable kittens at risk, but with sterilisation being expensive, possibly against their culture and often unheard of, many local cat owners know no alternative. Sometimes, kittens found alone in the street are also brought to the rubbish tip by well meaning people who have heard about Fatima – the lady who takes care of cats.

I spent every waking moment of my last 2 weeks in Morocco trying to stabilise the kitten dumping crisis and put a system in place to help Fatima cope with the problem when I return to the UK.

Fatima and ERHAM members have carried out 3 clean up and treatment days and created a better environment for the kittens to live in. I visited the rubbish tip twice a day to feed up to 200 hungry mouths with nourishing food, while clearing away rotting fish heads and bread, milk and couscous left by seemingly caring locals. We have cleaned and treated hundreds of infected eyes, syringe fed the young kittens and buried the corpses of the ones who didn’t make it.

These innocent abandoned kittens now have a better chance to survive, but I am no longer in Morocco and Fatima desperately needs help to buy nourishing food and medication. 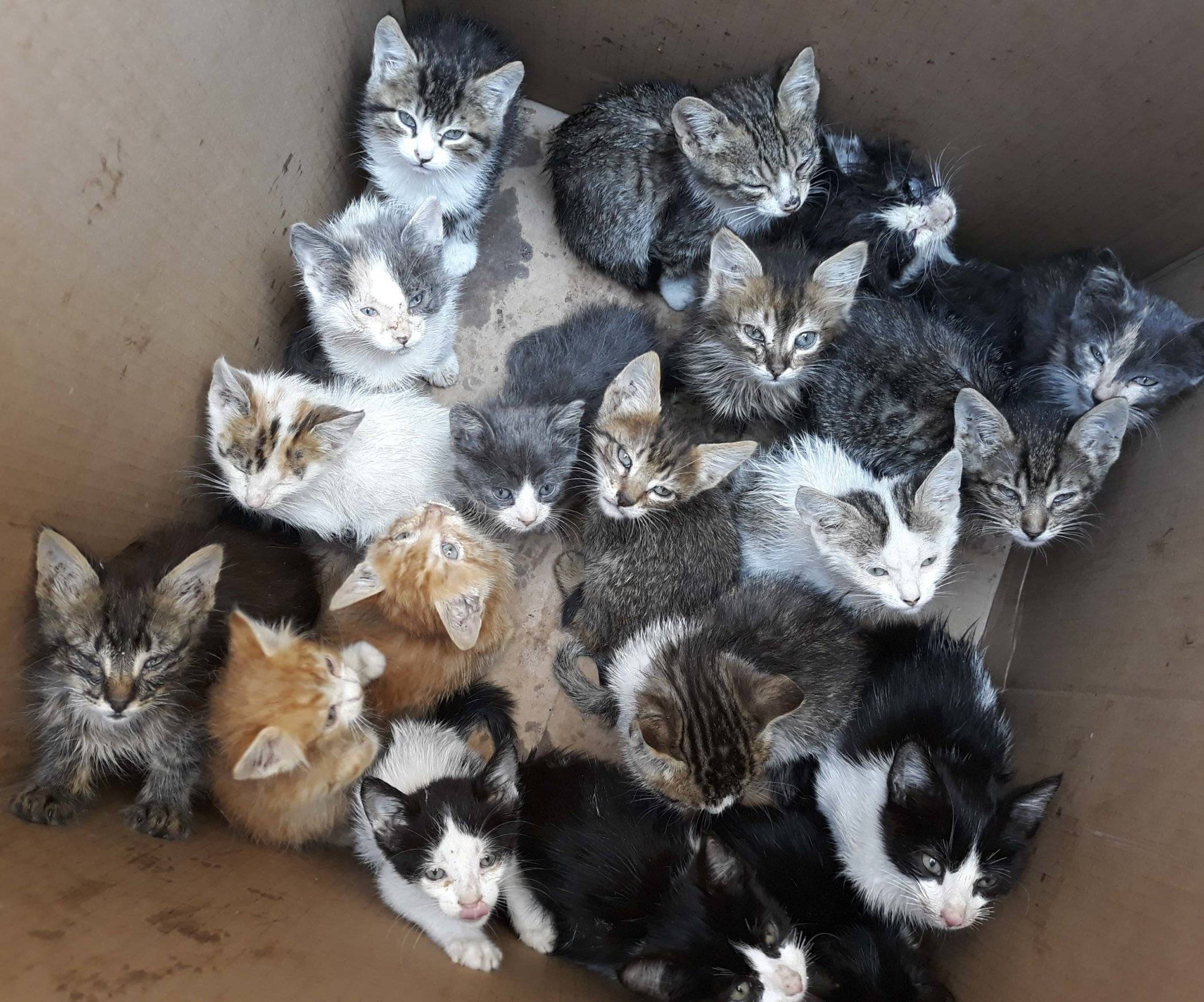