“The cat was a Rainbow in a Dark World”

Anyone who lives with cats is aware of how tender they can be and the magic they bring. A few years ago while living in Los Angeles, I stumbled across an incredible true story about a cat who deeply affected the lives of two men: the homeless man who rescued her and her cat-dad who never stopped looking for her.

Six months earlier, I’d moved from London with my filmmaker husband and our five cats when I saw the headline in a Montana newspaper, which had been syndicated across the country: “Homeless Man Travels 3,600 Miles to Take Cat Back Home”. It was the ultimate love story: a lost troubled man finds a lost cat and takes her on a 10-month journey across the American West.

I adore reading stories about animals and this one had love, loss, adventure, mystery and a bit of fairy dust about it. I was touched by how deeply this drifter who had nothing felt about his furry companion and the way he spoke of her: “The cat was a rainbow in a dark world.” 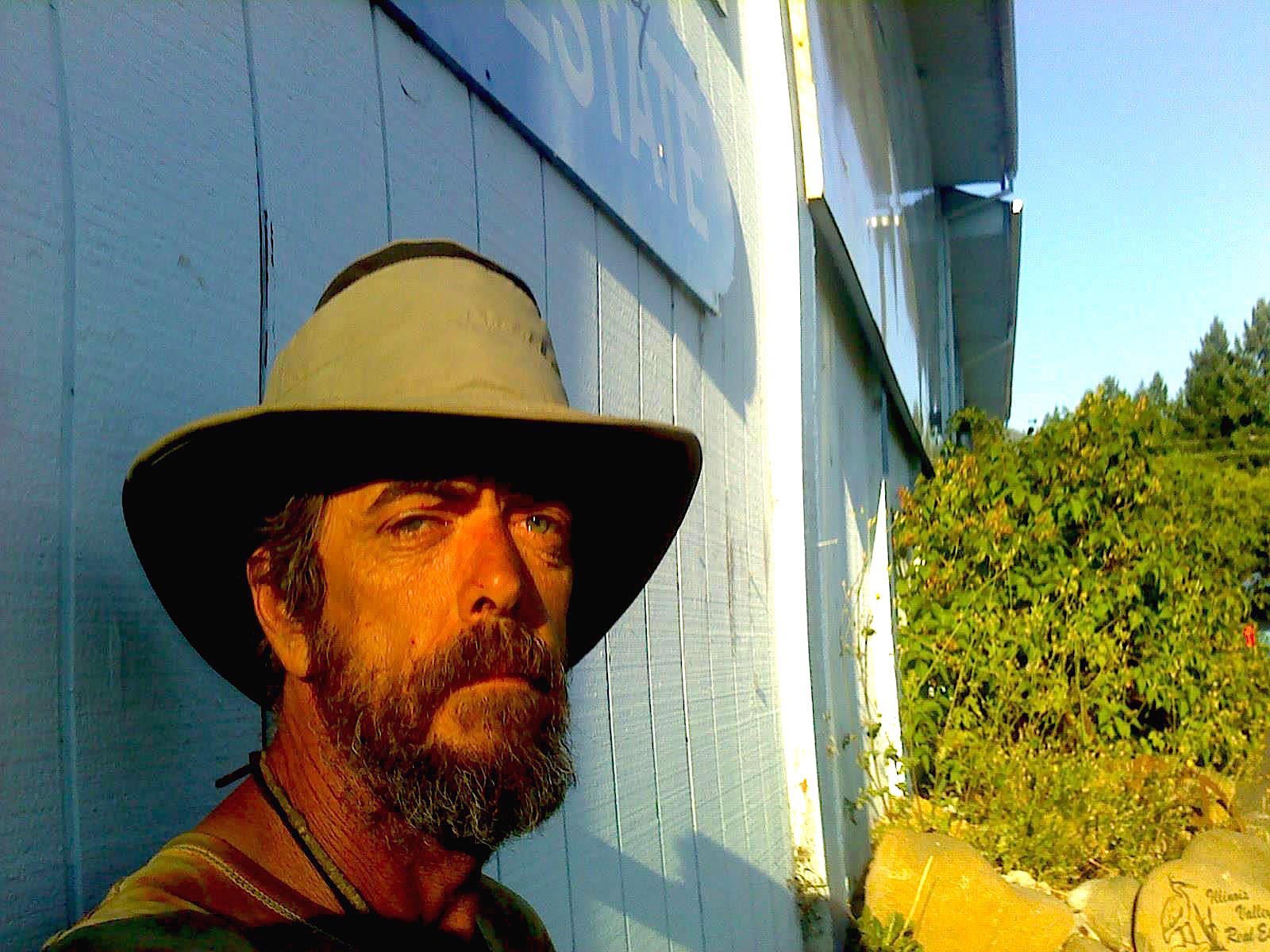 Michael King had given up on his former life as a chef in St. Louis, Missouri. After his partner died of AIDS, he hit the road and, after lightning strikes of bad luck, fell into homelessness. He was depressed, drunk and living in a UPS loading bay in Portland, Oregon when he found a hurt and starving stray he named Tabor. The last thing he needed was a cat since he could barely feed himself but, as Michael would later say, “I fell in love with a cat.”

They drifted with the seasons up and down the coast. When winter blew in, Michael hitchhiked with the cat on his back all the way to California. Along the way, they survived on the kindnesses of strangers moved to help them. Incredibly, Michael protected Tabor from the dangers of the city and the wilderness. There were plenty of harrowing moments: they shacked up in a barn on a deserted horse farm to survive a blizzard; had encounters with bears and armed rednecks; an ambush by coyotes while living beneath a tree on a California beach. In Idaho, while hitching a ride, Tabor refused get into a cowboy’s pickup truck and broke out of her leash, causing chaos on the freeway. Michael had to carefully pursue her along the hard shoulder while the Marlboro man watched, smoking his fag and thinking the cat was a goner. In Montana, stampeding longhorns chased Michael as he desperately clung onto his crazed and terrified cat. Soon after, when Michael visited his foster-father Walter with the cat his shoulder and torn, bloodied arms, he thought he’d been savaged by a grizzly.

The cat in turn saves his life. While camping in Yosemite, Michael drunkenly passed out beside the bonfire. Tabor wailed and yowled in her hard carrier, where she’d been tucked in for the night to protect her from wild animals, to wake him. When he opened his eyes, he saw that he was on fire and his sleeping bag had burned away to his knees.

In the meantime, as Michael and Tabor, whose real name is Mata Hairi, drifted across the West Coast, her cat-dad Ron Buss was mad with grief. He saved Mata and her littermates as palm-sized week-old kittens after finding them abandoned under a neighbor’s porch. He bottle-fed them and gave three to friends. He kept the remaining two Mata and Creto, who would become his sun, moon and stars. Raising them like children, he cooked for them, wrote songs for them, and took them everywhere. So when Mata disappeared, he mourned her daily: crying in the attic, consulting cat psychics and constantly searching for her. Her brother Creto was just as depressed and waited for her on the porch every night the entire time she was gone. Ron was also at war with his homophobic, animal-hating neighbor, whom he suspected of murdering his cat. 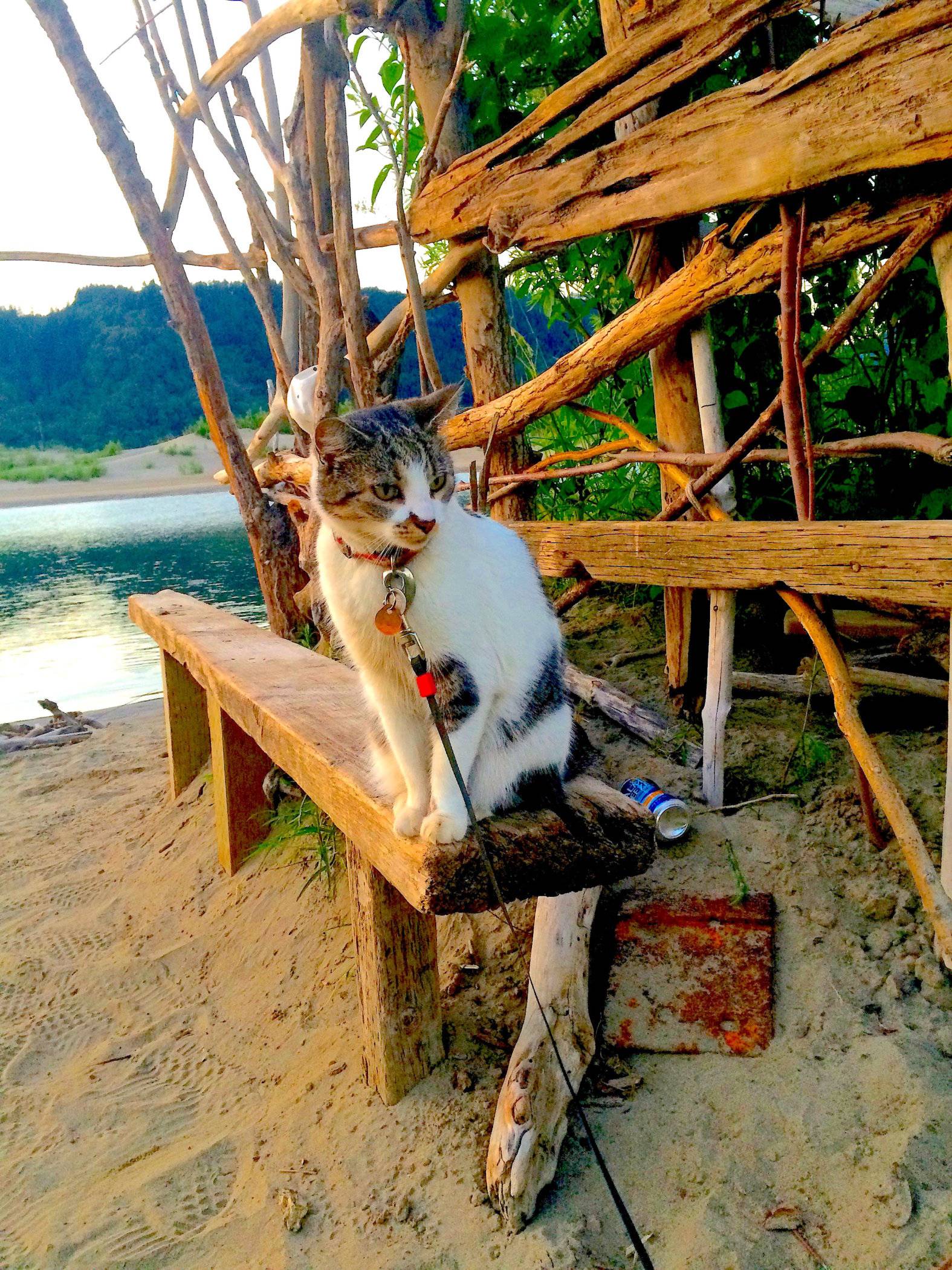 Ron is a guitar dealer and musician, and a Beatles fanatic. He and I had a shared obsession with cats and music — especially the Beatles — who all happened to be cat-mad too. Sure the list of feline-loving rockers is infinite. But Paul McCartney and John Lennon were crazy cat ladies who had as many cats as the Beatles had hits. John’s first childhood pet was a stray girl called Elvis. He and his first wife Cynthia had 10 cats and named one Jesus, likely his irreverent response to the “bigger than Jesus” controversy of 1966 (amusingly, Paul also had a kitten named Jesus). Once during a recording session, the receptionist brought in a box of stray kittens and their mother she found outside the studio. John said he couldn’t take any since he was going on the road. When someone walked in with a black kitten wrapped around his neck, John laughed and said, “Oh now you’ve done it,” and ended up adopting it as well as the noisy white one nobody else wanted. In fact, when I interviewed Paul McCartney he told me that a cat brought him and John Lennon back together after their long fallout. One of John’s seven cats, his favourite, a Russian Blue named Alice, had fallen out of an opened window of the Dakota and died. He was inconsolable and knew that Paul would understand the depth of his grief.

The line between joy and sorrow really is thinly drawn. For many losing our companion animals cuts the deepest, as their love is without expectation — pure and whole-hearted —sometimes transformative. 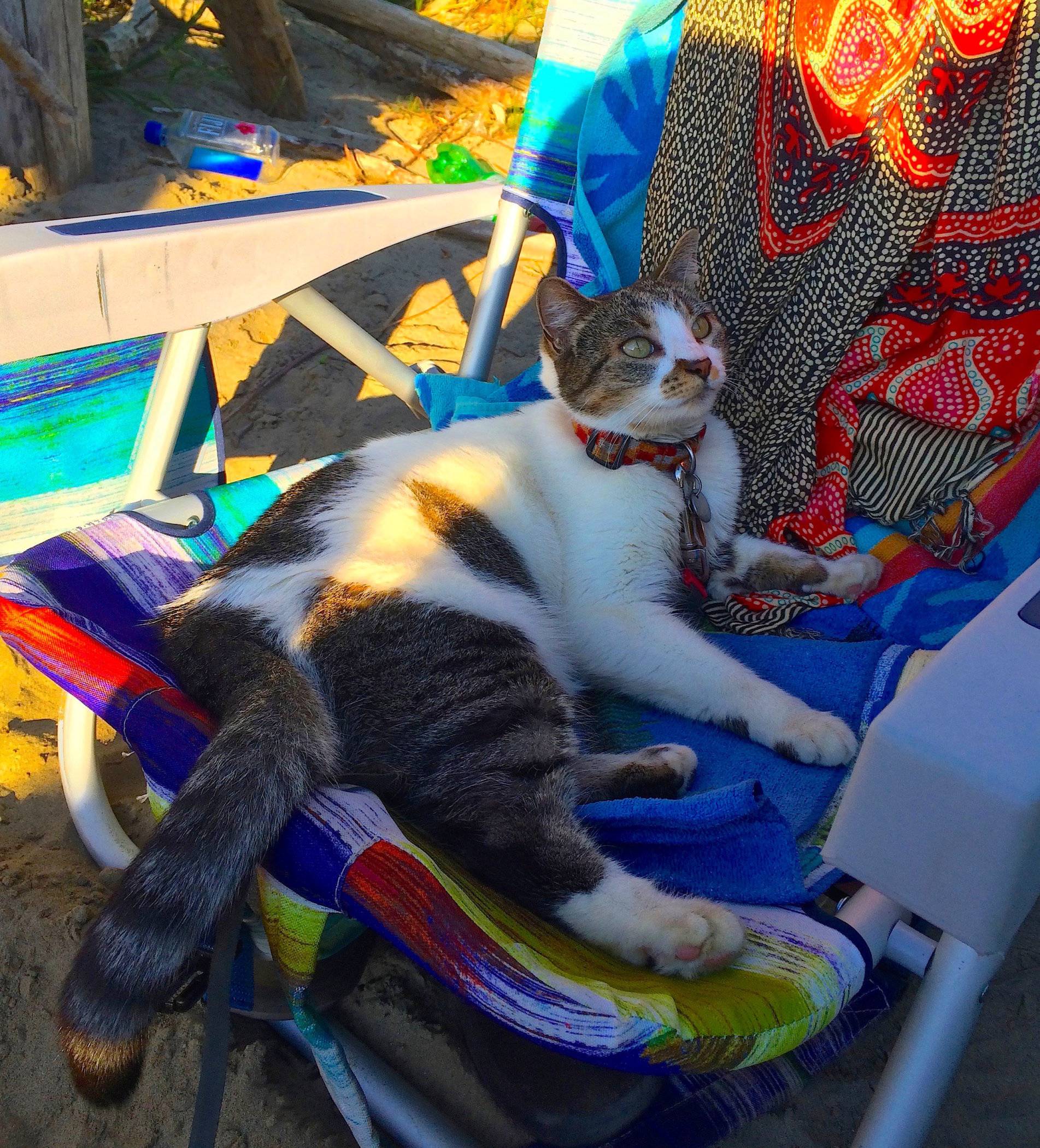 The story of this lost cat and lost man had a very universal message, which is the healing power of the human-animal bond. When Michael, as a teenage runaway, first met his foster-father Walter, an ex-Vietnam vet and recovered alcoholic, he told him “anyone who’s on the down-and-out heals himself with animals.”

Several decades later, after Michael ends up on the streets, he experiences that sentiment in full force after he finds the scared, hurt stray. And, quite unexpectedly, this little cat takes him on an adventure and helps a broken man turn his life around. Yet when he finds out his road-buddy Tabor has a microchip and a devastated owner back in Portland, he does the right thing even though it breaks his heart. 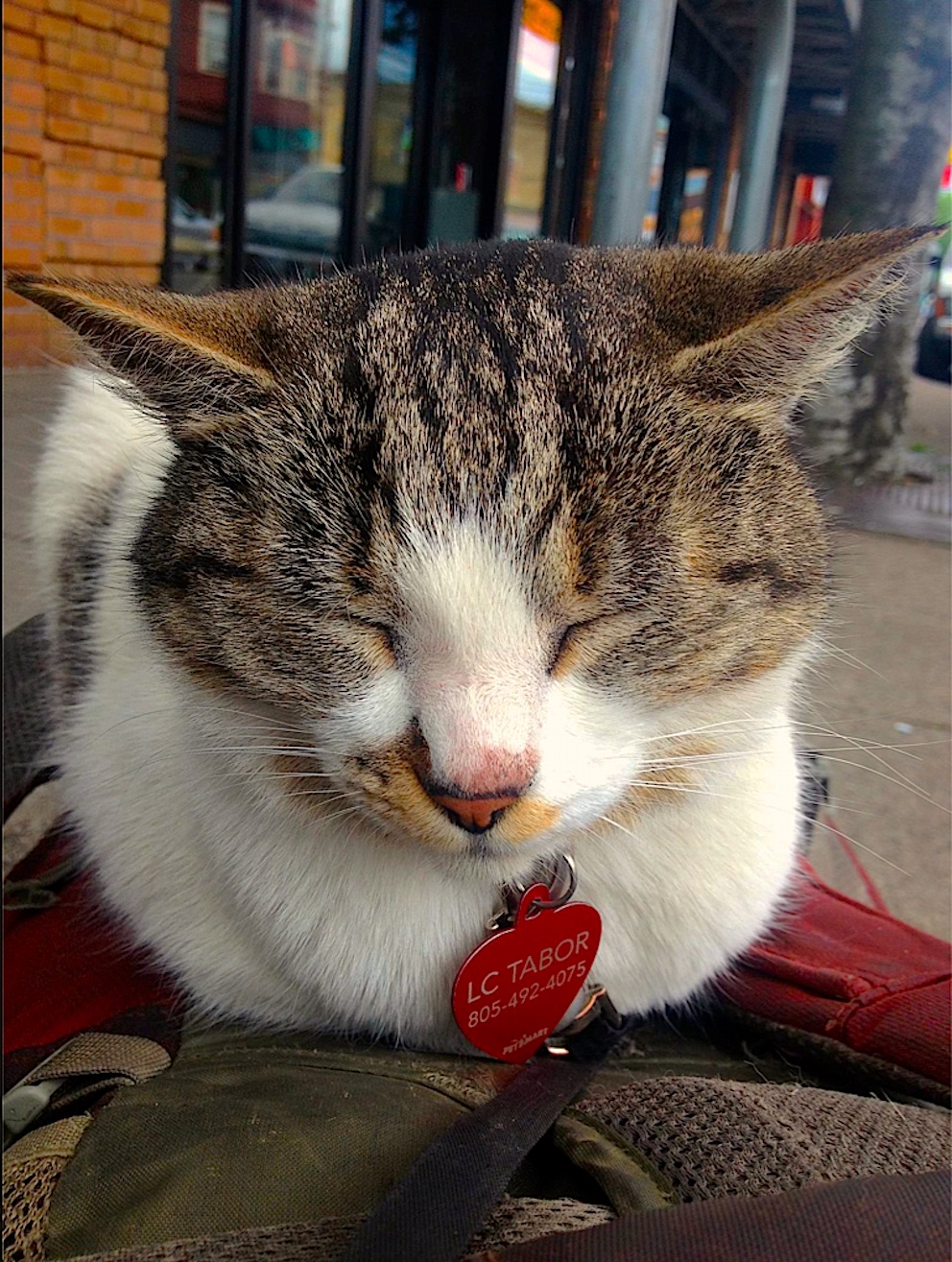 Once Michael brings Tabor back home, she’s distressed after he leaves her. Seeing how sad Mata was, Ron remembered how much she loved music. He plays her the Beatles song, “And I Love Her”. It jolts her memory and she begins to realise she’s home.

Losing the cat for Michael was just another heartache in a lifetime of sorrows. He knew Tabor changed him in so many small but not insignificant ways. After Tabor he rescued a succession of other strays until he found Abbey Road, a scrawny puppy who would become his new road buddy. 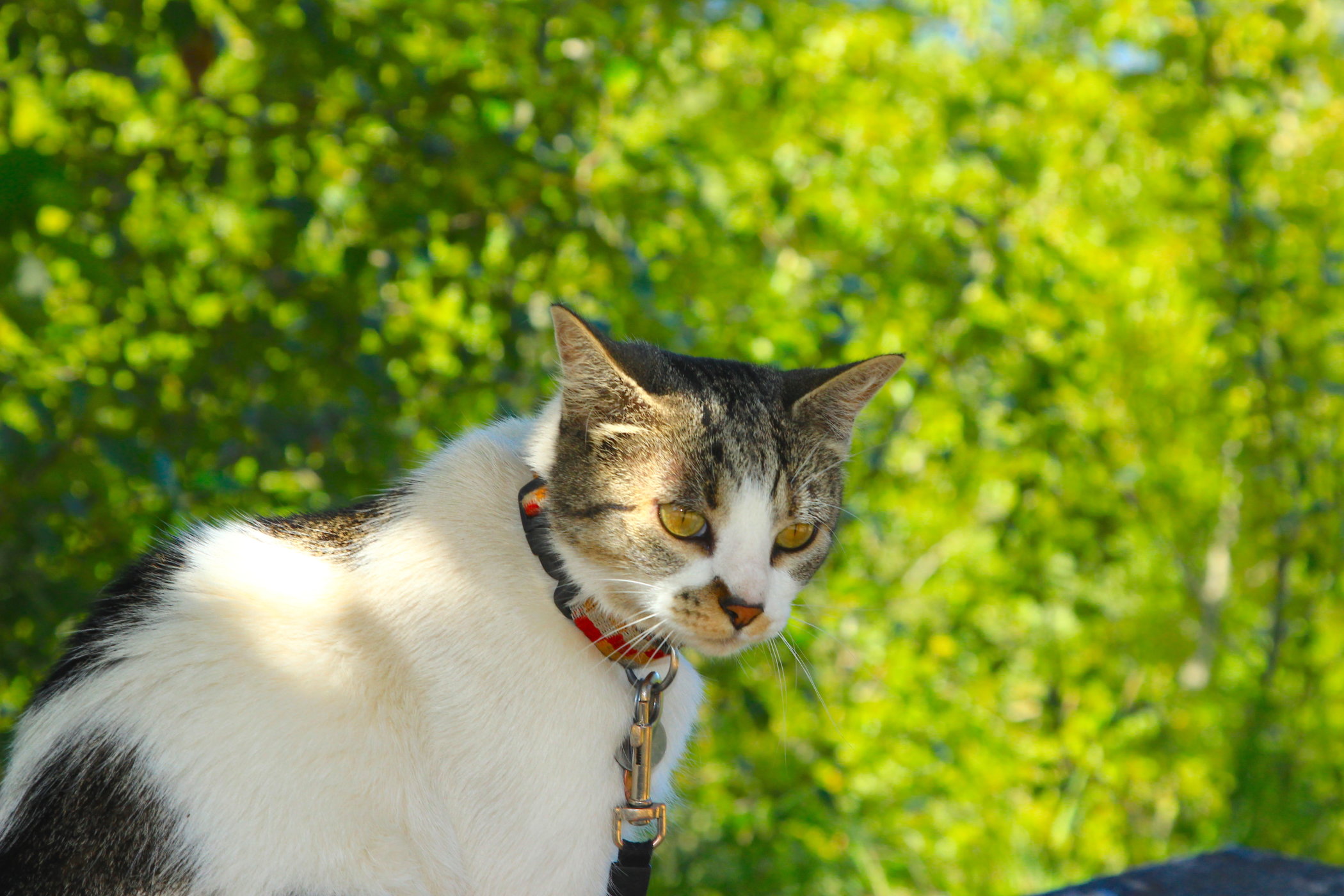 While researching the book, Ron took me to Sauvie Island on the Oregon coast, where he spent summers with his grandparents as a kid in the 70s. At sundown, as we sat on blankets over a picnic with Tabor and Creto, a bone-thin black kitten appeared out of the trees. Someone had clearly left this tiny, starving creature to fend for herself in the woods, where somehow she survived all sorts of predators. Ron took her and Sauvie became a permanent member of his feline family. And Sauvie in her own subtle way became a star when she graced the cover of the Oregon Feral Cats Coalition magazine. 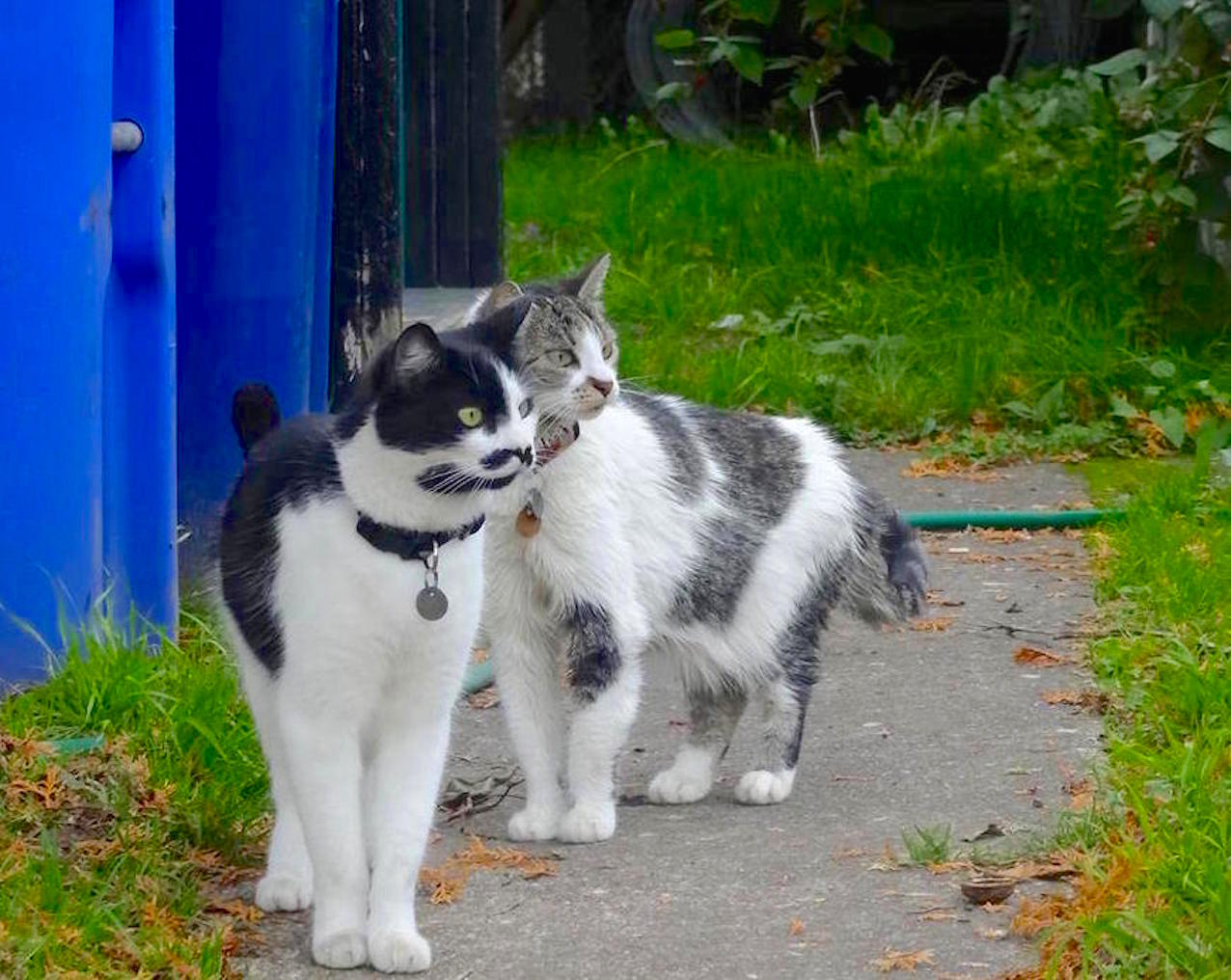 Ron thought it was fate that he and I rescued the kitten. Michael thought he was meant to find Tabor to bring her back home to Ron. And I think I was meant to bring Strays out into the world.

My wildest hope with the book is to inspire people to adopt from kill-shelters or the streets. We have a blurry notion of homeless and feral cats. Like homeless people, street animals are marginalised, misunderstood and sometimes mistreated. The greatest misconception is since cats are predators many consider them wild animals who can fend for themselves. Nothing could be further from the truth. In America, there are an estimated 100 million homeless and abandoned animals, and nearly 10 million in the UK, and those that manage to survive rely on the kindness of compassionate people. 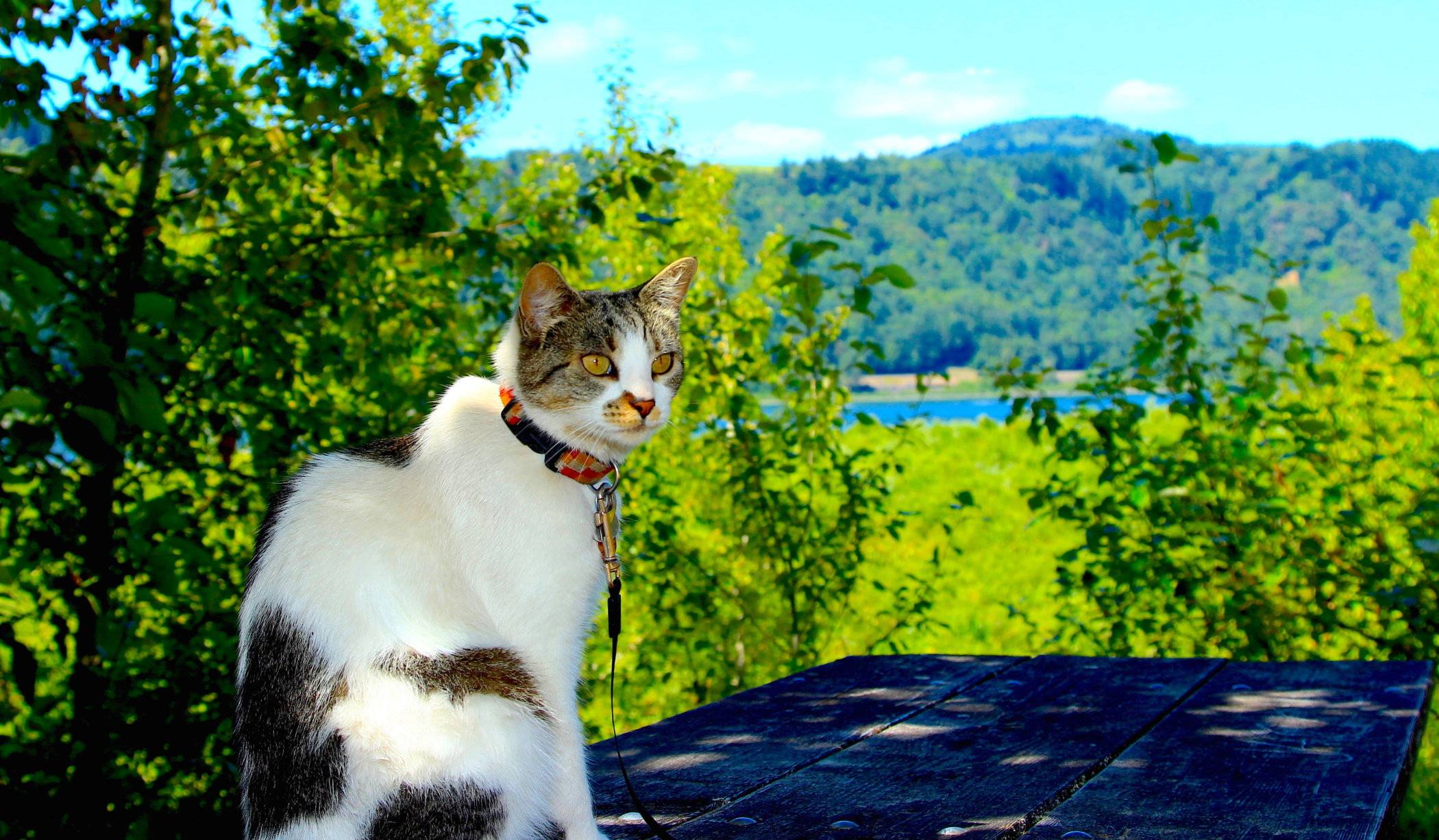 It’s heartbreaking that so many animals are still bought from parasitic breeders and shops, perpetuating appalling cruelty and suffering, while millions are being put to death in shelters. Every time a cat or dog is bought, another one dies that could’ve otherwise been saved.

This is one of the reasons I started Catfest, a festival for cat lovers, to help animals in need, as well as changing a few hearts and minds. 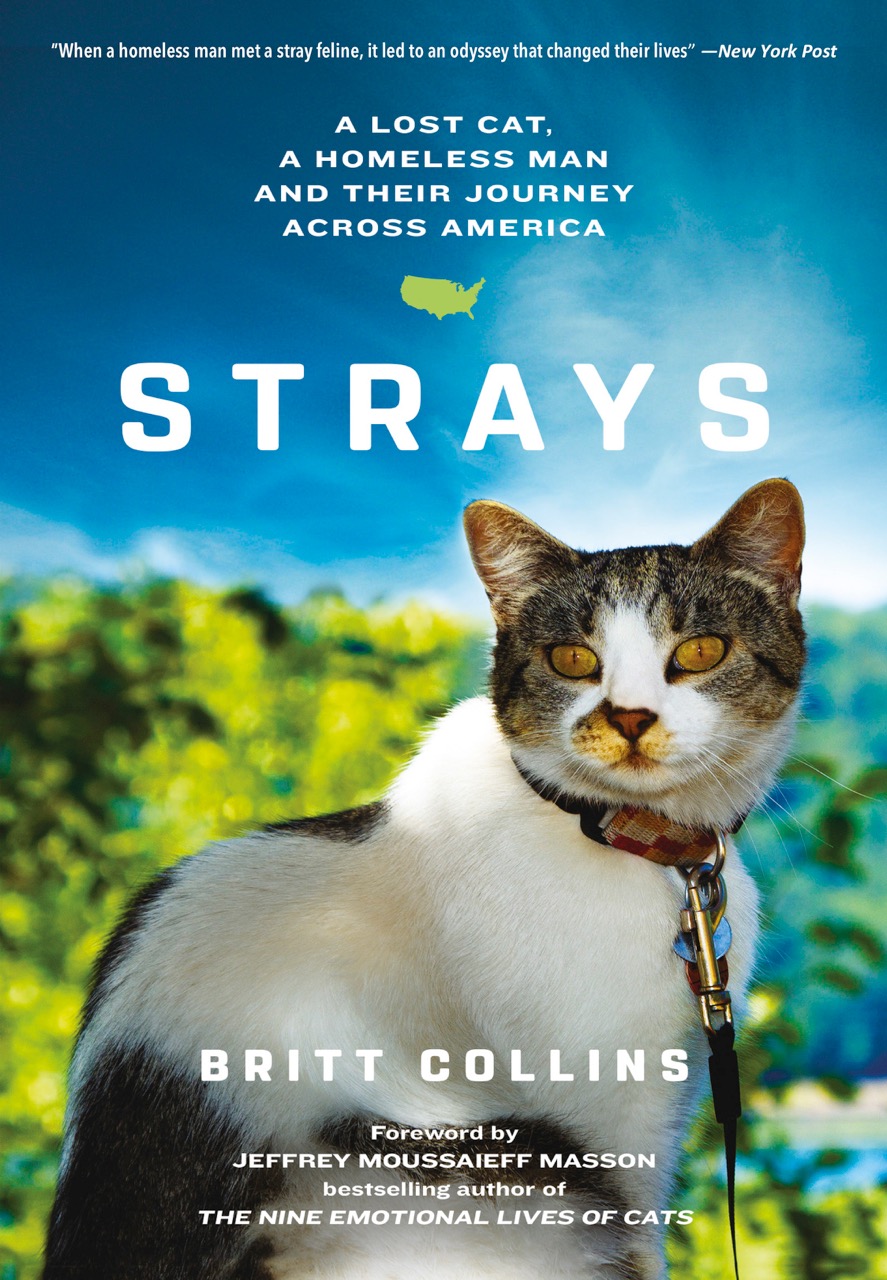 Strays: A Homeless Man, a Lost Cat and Their Journey Across America by Britt Collins (Simon & Schuster) out now

25 thoughts on “LOVE CATS: The cat was a Rainbow in a Dark World”