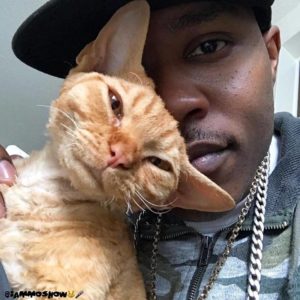 by Mollie Hunt for Katzenworld

Walking into the tiny, Southeast coffee shop, no one could miss the tall man in the colorful clothing, a heap of cat bling looped around his neck. This is Moshow, the Cat Rapper, and I was there to interview him!

What is a cat rapper? You may well ask because as far as I know, there is only one, and he is unique. I asked Moshow what made him begin rapping about cats, and he gave me the perfect answer: “No one made me.” He raps his “truth” which is his cat family, his determined positivity, and his message to follow your dreams. 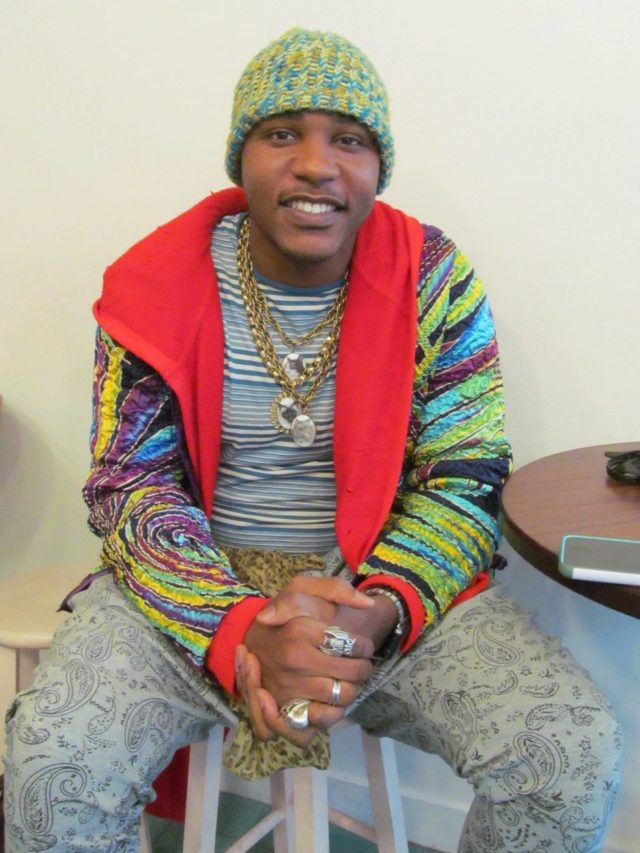 Moshow, also known as iAmMoshow or M$HO, came to Portland Oregon three-plus years ago from the East Coast to find a place he could be himself and work his music magic, and he brought with him his three sphinx cats, Sushi, MegaMam, and their mom, Tali. Portland welcomed him, and especially in cat-centric circles, he quickly made a name for himself. Rapping unabashedly about his love for cats as well as his advocacy for them, he put himself out there where no man has gone before, and it paid off, but not without some initial skepticism and a certain amount of ridiculing. I asked Moshow how he dealt with the scoffers. He replied that there is a fearlessness in not caring what other people think. “You can’t please everyone. I do it for myself.” We are so glad he does!

His cat family increased to four with the addition of Ravioli, and then five when he became aware of the plight of black cats in the shelter system and adopted Black$avage from the Oregon Humane Society. Black cats are often passed over for their more colorful brothers and sisters, and thus left to a dubious fate, especially in kill shelters. Moshow is now actively advocating for the adoption of all black cats.

Moshow isn’t afraid of tackling difficult subjects when it comes to cats. The reason I was contacted to write this post has to do with the most difficult cat subject of all: the litter box. Moshow was approached by Arm & Hammer Cat Litter to endorse their new formula litter, SLIDE, and it’s one of those cosmic things, because Moshow was already using Arm & Hammer products, and had been for over two years. With five cats in his house, smell is a serious consideration. As to the various litters on the market, “I’ve tried them all,” he told me, and Arm & Hammer was the one that, by far, worked the best. He agreed to check out SLIDE  Cat Litter, and if he liked it, to collaborate on a promotion which included a new song and a YouTube video. Well, he liked it, and the result is “Slide,” a fun video with playful lyrics about the dreaded task of cleaning the litter box.

Aside from kitty-stink, Moshow has a special issue with the litter he uses because of his sphinxes. Since sphinx cats have no fur, they get dirty just like people and need to be bathed. (Check out Moshow’s video, “Cat Bath.”) Regular cat litters left a dusty film on the sphinxes’ skin, and within a few days, it was bath time again! To Moshow’s relief, Arm & Hammer SLIDE doesn’t do that. Sounds great, doesn’t it? Even though my cats aren’t bald, I would be over the moon to eliminate litter dust in my house! And we know it isn’t good for kitties to breathe that stuff every time they use their commodes.

Arm & Hammer Slide has another innovative feature, which accounts for its name. The formula doesn’t stick to the sides of the litter pan, so when it comes time to replace it, it’s as easy as sliding it into the garbage can. But why should you read my dry and boring words when you could see a real demonstration on Moshow’s “Slide”? Yes, he’s rapping about the benefits of cat litter, but I guarantee it’s from the heart, and who among us cat people isn’t looking for a better litter?

Cat folks— want another reason to watch this fun video? If the video receives one million views by January 31, 2019, Arm & Hammer will donate $10,000 to Mac’s Fund, a trap-neuter-return cat welfare organization based in Philadelphia, PA. 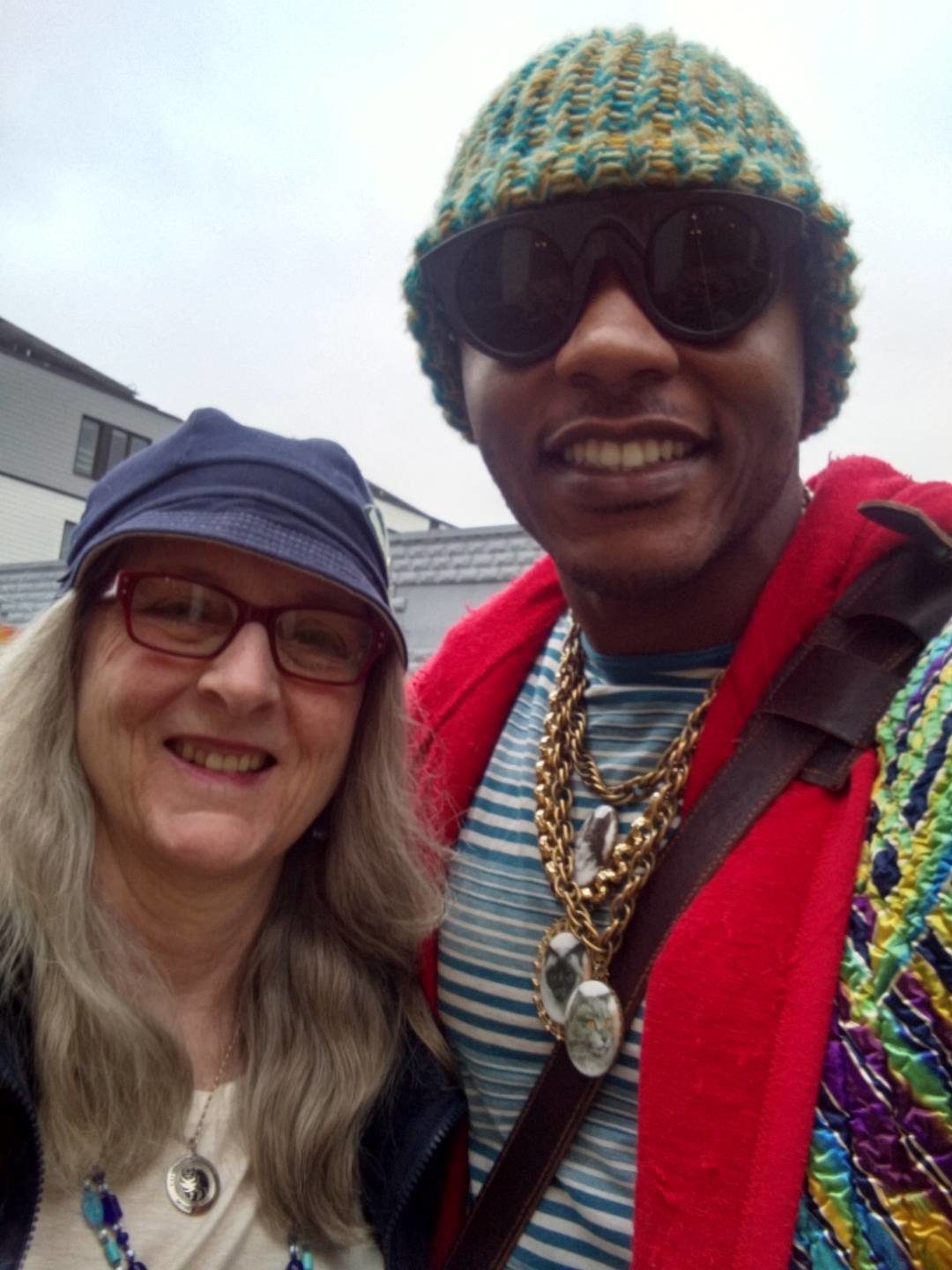 I can’t tell you how much I enjoyed meeting Moshow! He is one of those people that radiates authenticity, well-being, and positive energy.  He’s funny, smart, and doesn’t use profanity in his songs. When I asked what else he wanted my readers to know, it was how much he supports all cat people.

Moshow has a new album coming out this month, and just released a line of cat-themed socks for Sock Dreams. Who doesn’t love cat socks? 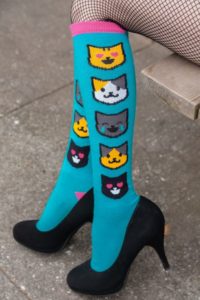 And the question we’re all are asking— does the Cat Rapper really clean his own litter boxes? The answer is, yes, he does! 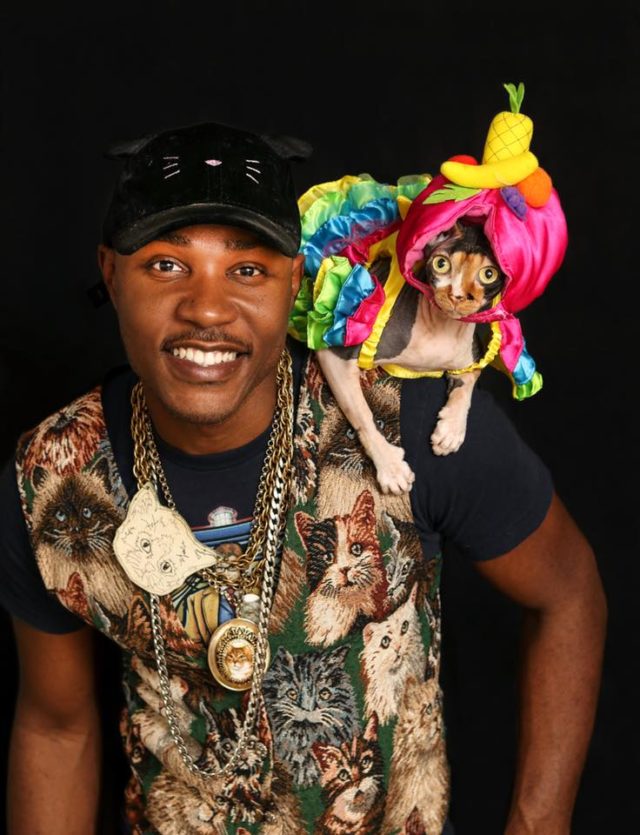 Disclosure: I received a sample of SLIDE Cat Litter from Arm & Hammer for writing this blog interview, and of course I got to meet and talk to Moshow (priceless!)

About iAmMoshow, The Cat Rapper™

iAmMoshow is the Internet’s premiere Cat Rapper. Born and raised in inner Baltimore, MD he combined his passion for rap and cats to defy the odds and build a name for himself. Some of his most popular songs include Cat Bath Rap, Cat Emotions and Cat World and he currently has three albums available on YouTube, Spotify, Google Play, Amazon Music, Deezer, Apple Music and iHeartRadio.

Currently living in Portland, OR with his 5 cats – Black $avage, Sushi, Tali, MegaMam, and Ravioli – iAmMoshow is on a mission to inspire the world, sharing with others the lessons he has learned, to not give up on yourself and follow your dreams, no matter where they take you. To learn more, check out www.facebook.com/iammoshow and follow @iammoshow on Instagram. Don’t forget to tag #BeautifulCatLadyWednesdays.

Like all of iAmMoshow’s videos, he uses catchy lyrics and an infectious smile to spread his positivity and love for cats. In “Slide,” he tackles one topic of cat ownership that is often dreaded, cleaning the litter box.

“Whenever people come to my house they say ‘you have five cats and I don’t smell a thing,’” said iAmMoshow, The Cat Rapper™. “I wanted to write the ‘Slide’ rap because I’ve always been a fan of Arm & Hammer cat litter. Not only is it easy to clean because it doesn’t stick to the sides of the litter box, but it also doesn’t leave dust particles on my cats. SLIDE litter keeps my house and my cats so fresh and so clean.”

With more than 420,000 Facebook followers and most recognized for his Cat Bath Rap, Cat Emotions and Cat World videos, iAmMoshow has built a strong online community for people to encourage and support one another’s fondness for cats. Having just released his third album, his songs help educate and raise awareness about issues related to cat welfare. Topics include, supporting animal shelters, trap-neuter-return programs, the benefits of not declawing cats, adopting verses shopping for a cat and a reminder to consider adopting black cats, which are often overlooked or unwanted.

“iAmMoshow’s work aligns with many of our core values around celebrating the unique bond between pet owners and their pets and supporting organizations dedicated to cat health and welfare,” said Elizabeth Joe, Group Brand Manager, Arm & Hammer Pet Care. “We appreciate the amount of playfulness and fun iAmMoshow brings to his songs which made us eager to collaborate with him. We hope people enjoy “Slide” and it makes a chore like cleaning the litter box more enjoyable.” 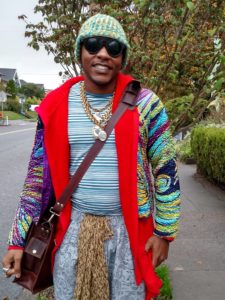 About Mollie Hunt:
Mollie is the author of the Crazy Cat Lady cozy mystery series, featuring Lynley Cannon, a sixty-something cat shelter volunteer who finds more trouble than a cat in catnip. Mollie is a member of the Oregon Writers’ Colony, Sisters in Crime, Willamette Writers, the Cat Writers’ Association, and the Northwest Independent Writers Association. Two of her short cat stories have been published in anthologies, one of which, The Dream Spinner, won the prestigious CWA Muse Medallion this year.

Like Lynley, Mollie is a grateful shelter volunteer. She is a longtime volunteer for the Oregon Humane Society where she socializes sad, fearful, and behavior-challenged cats. She also fosters sick and elderly cats in her home. In 2014, she had the privilege to work with cat behaviorist Jackson Galaxy on a particularly thought-provoking case.

You can find Mollie on her Website: http://www.lecatts.wordpress.com/, her Amazon Page: http://www.amazon.com/author/molliehunt, and her Facebook Author Page: https://www.facebook.com/MollieHuntCatWriter/.

Sign up for her Extremely Informal Newsletter at: http://eepurl.com/c0fOTn.