At International Cat Care we are very excited about an upcoming art exhibition ‘The Complete Cat’, held in collaboration with the Society of Feline Artists (SOFA).

The exhibition will be held 23rd November – 8th December 2018 in the beautiful Rook Lane gallery in Frome, Somerset.

SOFA is a federation of talented professional artists working in a wide range of media and styles but united by their interest in the feline form.

In the build-up to the exhibition, we will be bringing you biographies of the artists involved and examples of their stunning work.

A very generous 25% of the sales of all the artwork will be committed to our work for cats around the world.

We really hope to see you there!

Alex has always enjoyed drawing and as a child was inspired and fascinated by nature.

She studied Zoology at Nottingham University and for many years taught Biology and Chemistry at the Old Palace School, Croydon.

Alex joined the printmaking class at Bromley Adult Education Centre in 1993, where she learnt the techniques of etching, using acid on metal plates, and linocutting. Over the last 25 years she has developed her own individual detailed style portraying  a variety of subjects including landscapes, flowers, birds and particularly cats.

Alex is one of the artists whose work is featured in a book called “The Printmaker’s Cat”. She has been a full member of the Society of Feline Artists [SOFA] since 1998 exhibiting each year at The Llewellyn Alexander Gallery in London and is also a member of Croydon Art Society. 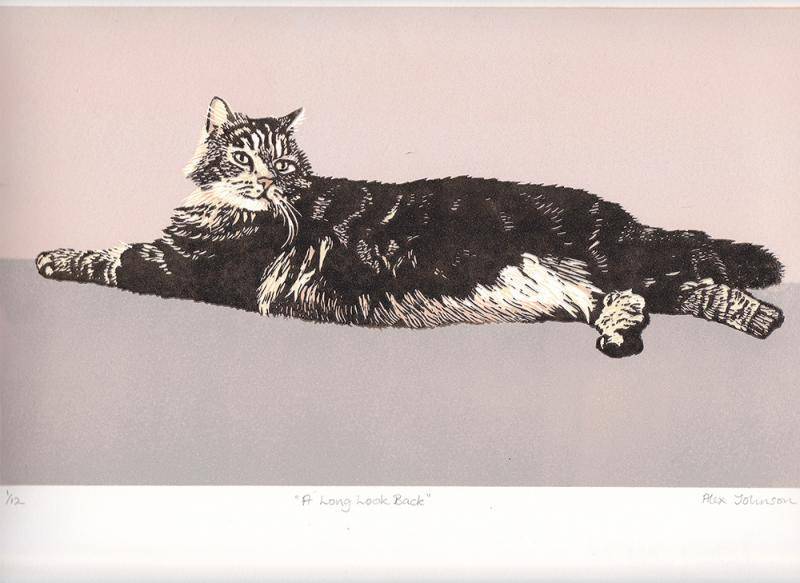 A Long Look Back by Alex Johnson

Astrid graduated with a BA (Hons) in Fine Art Painting from Nottingham Polytechnic in 1991, having previously attended Norwich School of Art.

Previous work was of a figurative nature, using oils, acrylics and other drawing media.

Astrid has always had an interest in natural history, in particular birds and animals. A love of cats has led to her specialising in feline portraiture as well as entering the world of the cat show with success.

Astrid was a founder member of The Society of Feline Artists, formed in September 1994. She has held posts on the S.O.F.A Committee, including General Secretary since it began. She was also on its Selection Committee in the Society’s early days. She exhibited at the National Cat Club Show at Olympia, London, in December 1994, which was the debut exhibition of The Society of Feline Artists. Since then, she has exhibited at Llewellyn Alexander (Fine Paintings), in Waterloo, London, firstly in September 1996 and for the last 21 years.

Other previous exhibitions were with The Society of Feline Artists at Patchings Art Centre in Nottinghamshire in 1997, The Clifton Gallery in Bristol in 1999, the Best in Show exhibition in Kensington, London, at the Walton Gallery in association with Commissionaportrait.com in 2002, and The Little Picture Gallery in Mousehole, Cornwall, in 2007. They currently hold some of her work.

Woodmansterne Publications and Elgin Court have published her work as greetings cards.

She has been featured in several magazines including The Artist, The Lady and The Leisure Painter.

Astrid accepts commissions for quality cat paintings and portraits and has undertaken many. She has now sold work internationally too, as she completed a specially commissioned cat portrait for a resident of Mumbai, India in 2009.

Many of her works feature Devon Rex and Siamese cats for which she has a particular passion. Her work is currently executed in acrylic medium on paper. 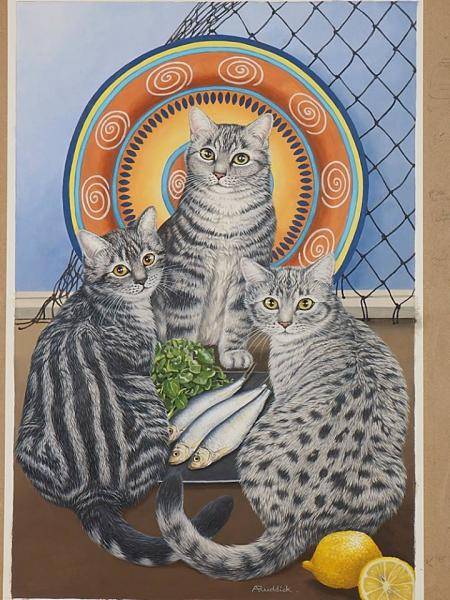 Celia now works in her studio in South London – cats, interiors and landscapes being her main subjects.  She exhibits regularly in group exhibitions and her greeting cards are distributed worldwide. 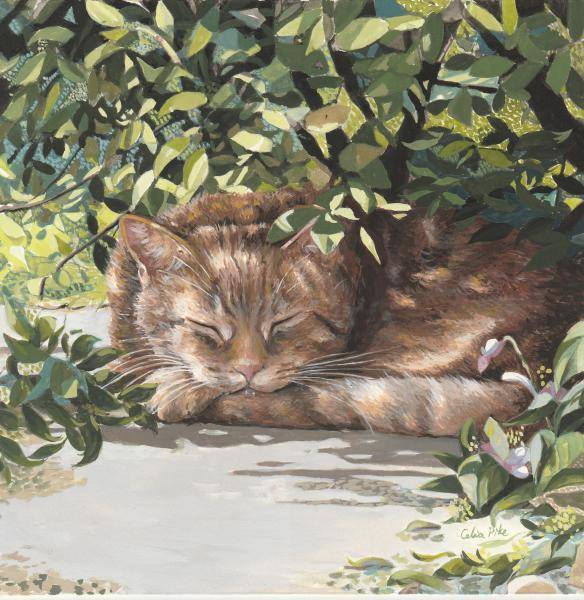 Woody in the garden by Celia Pike