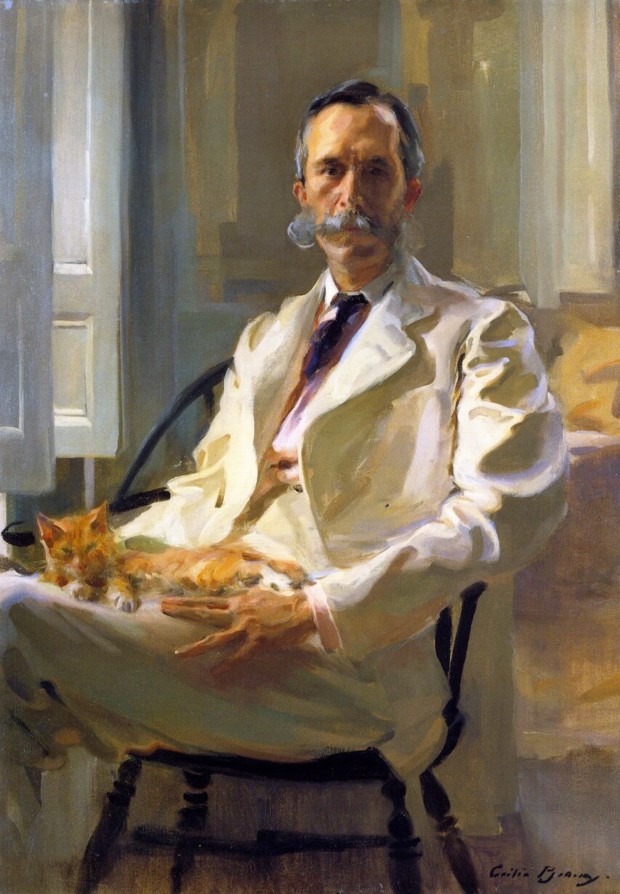 Perhaps you have not heard of today’s artist, the American, Cecilia Beaux?  She has been compared – favourably – to John Singer Sargent, and Mary Cassatt.

Eleanor Roosevelt named her “the American woman who had made the greatest contribution to the culture of the world” in 1933.

A couple of her pictures here illustrate her gift in portraying people with cats.  Her style is very beautiful.

Beaux lost her mother soon after her birth and was brought up by strong female relatives who fortunately valued education.  She began her career painting on porcelain and producing lithographs and portrait drawings.  She later decided that Portrait painting (with the occasional cat) was her métier – very fortunately for us.

She completed her art training in Paris at the Académie Julian and the Académie Colorossi (1888-89). She had the coaching of painters like Robert-Fleury, Bouguereau and Dagnan Bouveret.  When Beaux arrived in Paris, the Impressionists, a group of artists who had begun their own series of independent exhibitions from the official Salon in 1874, were beginning to lose their solidarity. Also known as the “Independents” or “Intransigents”, the group which at times included Degas, Monet, Sisley, Caillebotte, Pissarro, Renoir, and Berthe Morisot, had been receiving the wrath of the critics for several years. Their art, though varying in style and technique, was the antithesis of the type of Academic art in which Beaux was trained and of which her teacher William-Adolphe Bouguereau was a leading master.

Beaux later taught as the Pennsylvania Academy of the Fine Arts’ first full-time female professor. She was also a member of the National Academy of Design.

In 1890 she exhibited at the Paris Exposition.  Influential French critic M. Henri Rochefort commented, “I am compelled to admit, not without some chagrin, that not one of our female artists…is strong enough to compete with the lady who has given us this year the portrait of Dr. Grier. Composition, flesh, texture, sound drawing—everything is there without affectation, and without seeking for effect.”

Returning to Philadelphia, she obtained in 1893 the gold medal of the Philadelphia Art Club, and the Dodge prize at the New York National Academy, and later various other distinctions. She became a member of the National Academy of Design, New York, in 1902.

Beaux was an independent and successful woman at a time when that wasn’t typical, making a very comfortable living all by herself.  She turned down a few marriage proposals, one from Henry Sturgis Drinker, who ended up marrying her sister.

Drinker is the subject of my favourite painting, “The Man with the Cat”.  Here, he is sitting with a cat languidly stretched out on his lap.  The cat has its paws outstretched, so it is obviously very happy to be there, and indeed it studies the viewer with the relaxed, slightly superior gaze of many a pampered feline, with half closed, smiling eyes.  The room is suffused with light from the window which gives the man’s suit an almost angelic glow. 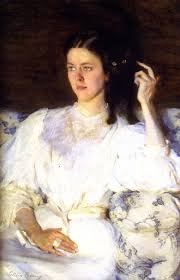 Sita and Sarita : This portrait shows her cousin Charles W. Leavitt’s wife Sarah (Allibone) Leavitt in white, with a small black cat perched on her shoulder, both gazing out mysteriously. The mesmerizing effect prompted one critic to point out “the witch-like weirdness of the black kitten” and for many years, the painting solicited questions by the press. But the result was not pre-planned, as Beaux’s sister later explained, “Please make no mystery about it—it was only an idea to put the black kitten on her cousin’s shoulder. Nothing deeper.”

But the true definition of “Technique” is very simple. A perfect technique in anything only means that there has been no break in continuity between conception, or thought, and the act of performance. –from “Address to the Contemporary Club of Philadelphia Shortly after Sargent’s Death,” 1926