Some of you may have read the piece about Dirk trying to beat the flab 😉 His weight is now down to 5.0 kg and his vet is happy with that.
I guess he’s happy too, otherwise it would have meant even less food.

What is this interesting new toy?

Dirk is quite skilled at using various activity feeders and has another dispenser ball too. It didn’t take long for him to get used to rolling the Catmosphere Dispenser Ball around the house.

Of course this may well be the first activity feeder you try for your cat. If so, you want to maximise the chances of success. You can adjust the opening to make it easier for dry food or treats to come out. I’d start with making it quite easy and using treats – the reward has to be worth it otherwise our feline friends might not even give it a try. I’m sure your cat will get excited! They can roll the ball around and hear the noise of the treats rattling inside. This is really a game for them as well as a meal provider. Once they are used to playing with the ball, you can make the opening smaller and use their regular dry food too.

Initially, I used a large opening so Dirk would get food out fairly easily. I didn’t want him to get frustrated with it as he only eats from activity feeders now.
In the easy setting, a lot of food came out at once, which meant Dirk was quite content to get a fairly easy meal 🙂

This ball is also great for bigger cats with big paws. I know a gorgeous big guy who struggles eating from some activity feeders that use pegs on a board. His paws are simply to big, which has to do with the size and build of his breed. He also has this Catmosphere Dispenser Ball and loves it! 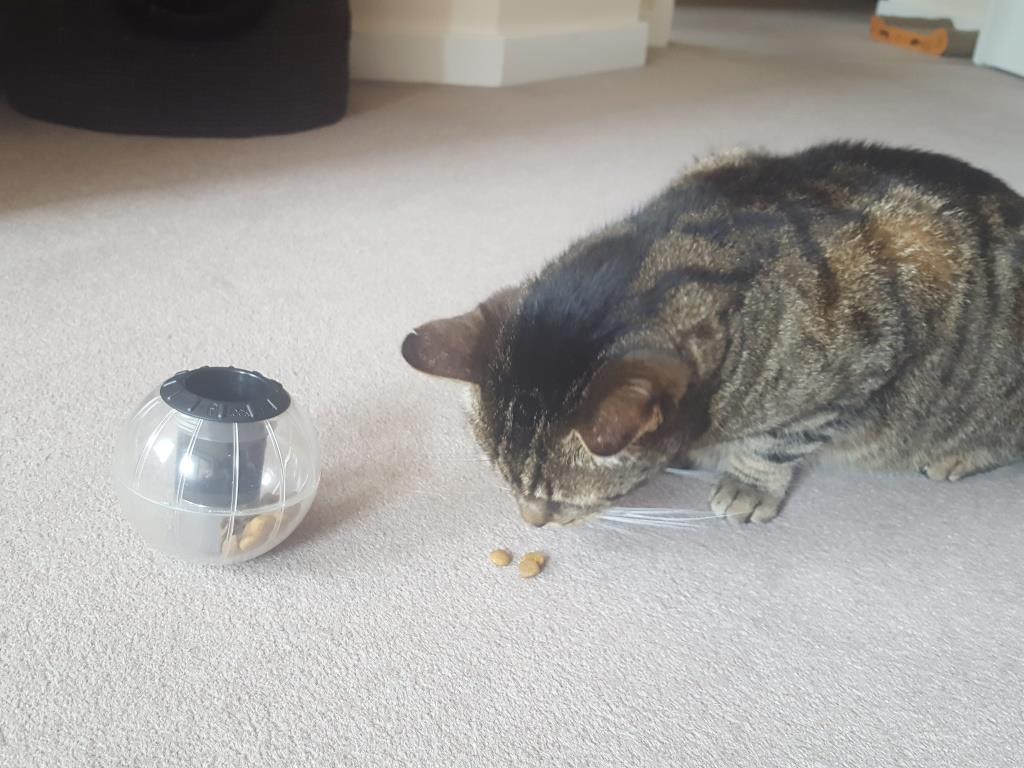 All the hard work paid off: got a snack!

The Catrine Catmosphere Treat Dispenser Ball is available via Animed Direct for a price of £7.12 at the time of writing the post! As many of you following Katzenworld might know it’s the trusted online store for Marc & Iain, thanks to speedy delivery which is even free if you spend £29 or more.

And in case you’d like more re-assurance, Animed Direct has recently achieved over 100.000 reviews with an over-all rating of excellence on Trustpilot! 🙂