By now you all know Dirk loves toys he can kick vigorously! He likes to chase toys too – the fishing rod style toys with feathers drive him mad – so I was quite curious if he would chase his new GiGwi PetDroid Interactive Mouse…

I was a little sceptical myself at first, as these toys usually make a very annoying buzzing-like sound when the mouse moves around. The mouse just runs straight ahead and by the time it reaches the wall I’m usually the one walking over to turn it in a different direction (yes, my cat trained me well LOL).

This one is a little different! I really quite like that the texture of the mouse is not a soft and smooth one, but a bit rough with different textures and fabric lengths. One of the best things about it, though, is that it makes squeaking sounds much like a real mouse. This makes the experience a bit more real and when you switch the mouse on and it starts squeaking, it triggers hunting behaviour in Dirk. He was instantly curious!

Dirk does not actually stalk the mouse much – more on that later – but he loves pouncing and of course kicking it. He seems surprised that the toy does not always respond in the same way when he pounces it: sometimes it stops moving and other times it moves in a different direction.

The front wheel of the mouse can turn so the mouse moves in different directions. This unpredictability helps keep you cat interested for longer. It also stops moving when your cat touches it again so it really tries to mimic a real mouse’s behaviour. I guess it’s the closest our indoor kitties are going to get to actually getting a mouse – unless you have real mice willing to risk their lives by venturing inside your home!

The best part of playing with this toy, for Dirk at least, seems to be picking it up and tossing it away or kicking it.

In the early stages of the game you can of course easily play with the mouse together. Dirk goes through the phases of being curious about the squeaky noise first and observe from a distance. I then pounce the mouse or drag it in a different direction by its tail and the fact that the mouse keeps moving and squeaking keeps Dirk very interested. Inevitably he’ll go into hunting mode as he cannot resist having a go himself. I sometimes try and grab the mouse by its tail when he’s playing with it to get Dirk to go after it, but as you can see he usually does not want to let go of it… 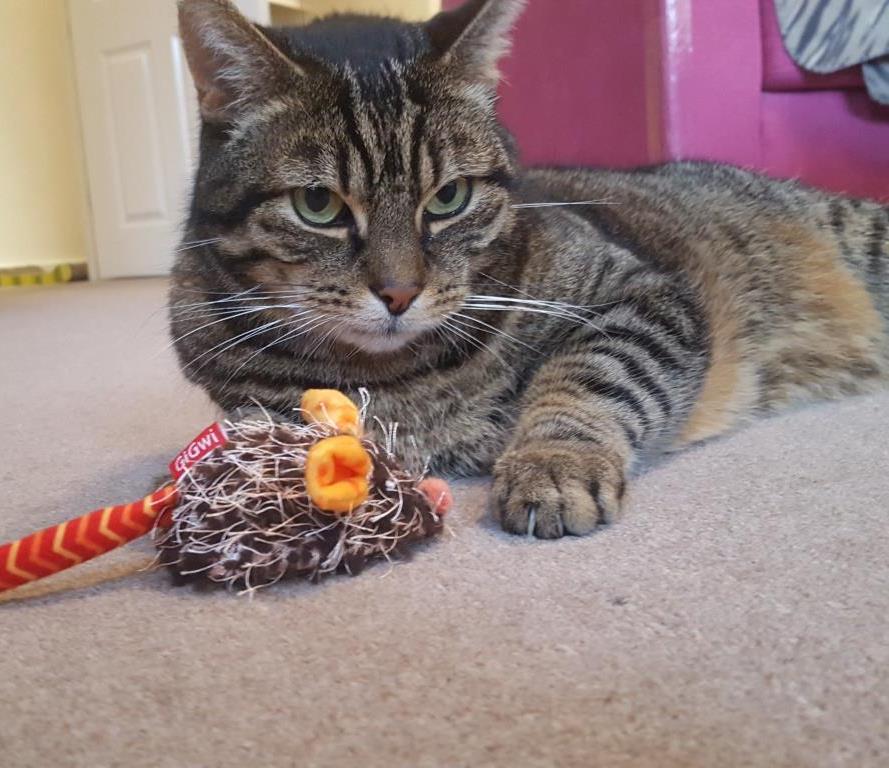 The packaging rightly recommends using the toy on a flat surface and I think laminated or tiled floors (or similar) would work best. I have low pile carpet, but when Dirk is playing with the mouse the wheels seem to pick up some threads and slow down a bit. On smooth surfaces you should not have this issue and your cat may even stalk his prey 😉

The GiGwi melody chaser mouse is available via online pet shops (worldwide) as well as in selected physical stores (UK & US).