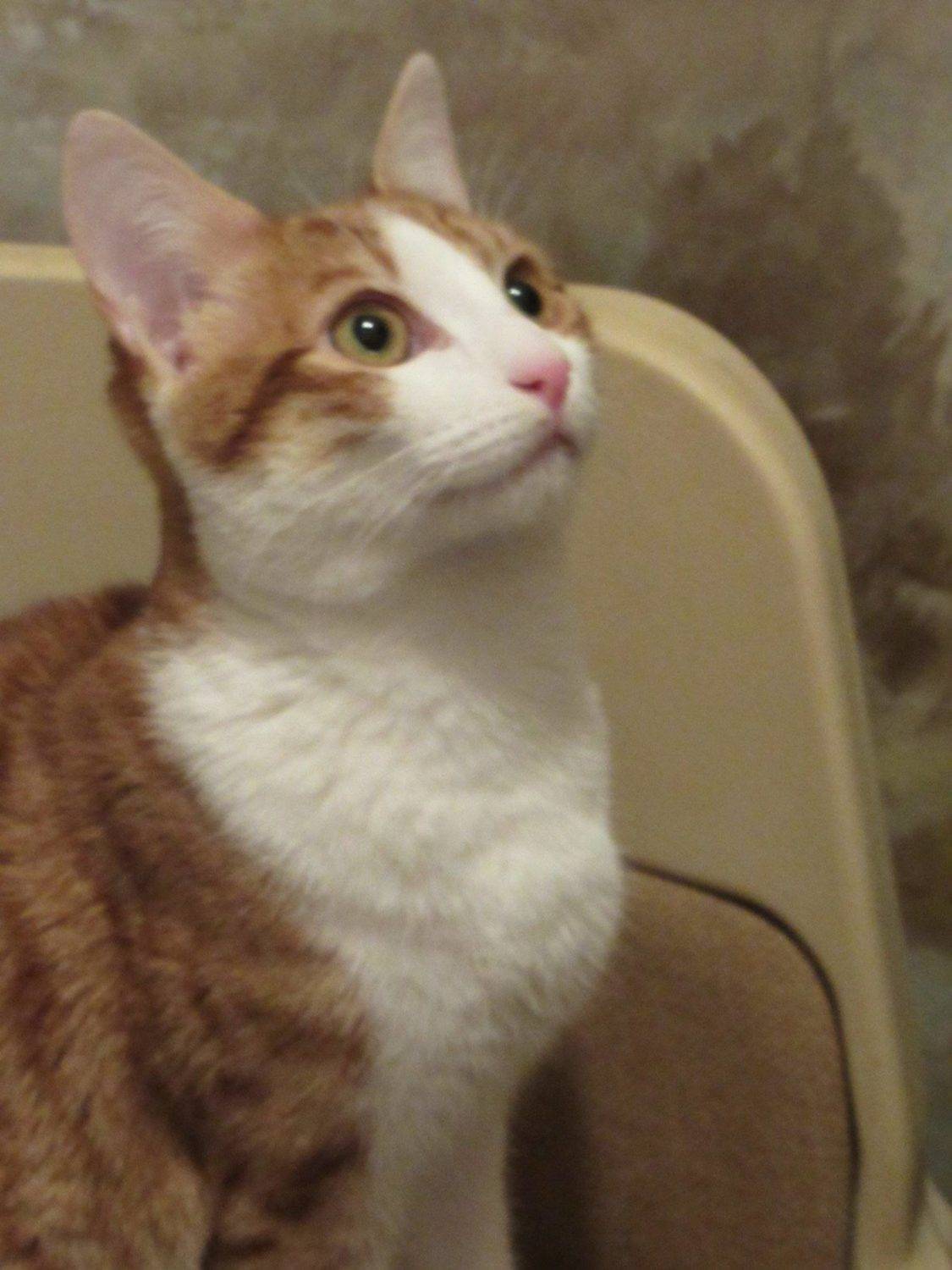 Filipos was on his way! My best friend was visiting so I told her the good news. I then double checked that everything a kitten would need was ready in the spare room; food, water, a litter tray, a bed and toys. I told my puzzled three cats that their new companion was on his way. I then stationed myself by the window.

Soon a red car drew up outside my house. I opened the door and Linda and Natalie emerged from the car. Natalie was carrying a cat carrier.

Linda greeted me. “He is a lovely cat and has been so good on the journey. We have given him food and water in the car a few hours ago.”

Natalie carried Filipos upstairs to the spare bedroom. My best friend, Linda, and I followed. Natalie placed the carrier on the floor and opened it. Filipos eagerly emerged from the confined space. He was smaller than I had expected and prettier too. His spotted fur gleamed liked burnished bronze while his white underside almost dazzled the eye. 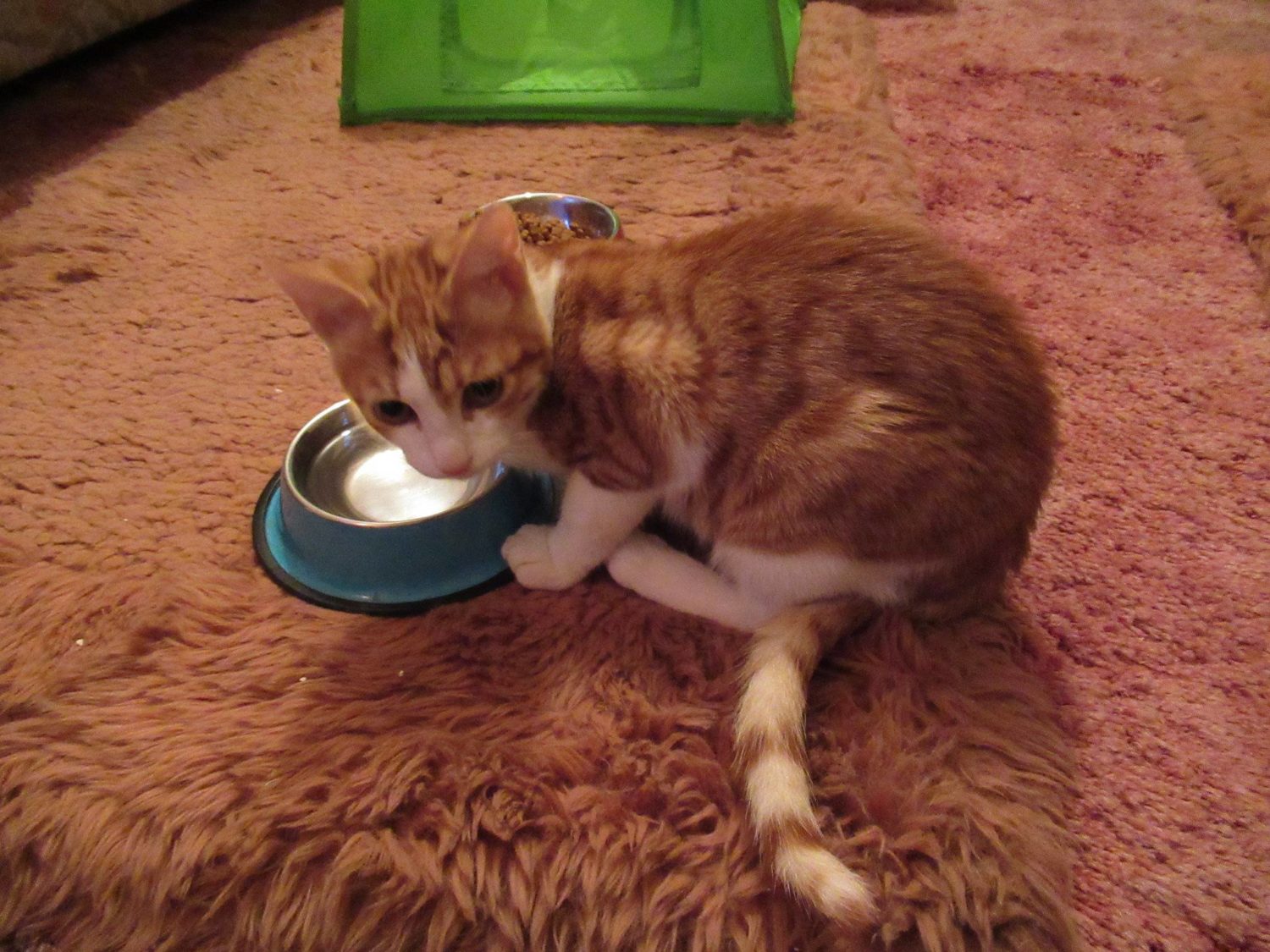 He helped himself to a drink and some food, the same as he had been eating in Greece, then ran around the room like a miniature whirling dervish. He let me stroke him, then was off again whirling around the room and leaping around. He then found a net petticoat on a chair and wrapped himself in it. That rather amused me as I had joked it felt like an arranged marriage as I needed to love and cherish Filipos until death did us part. 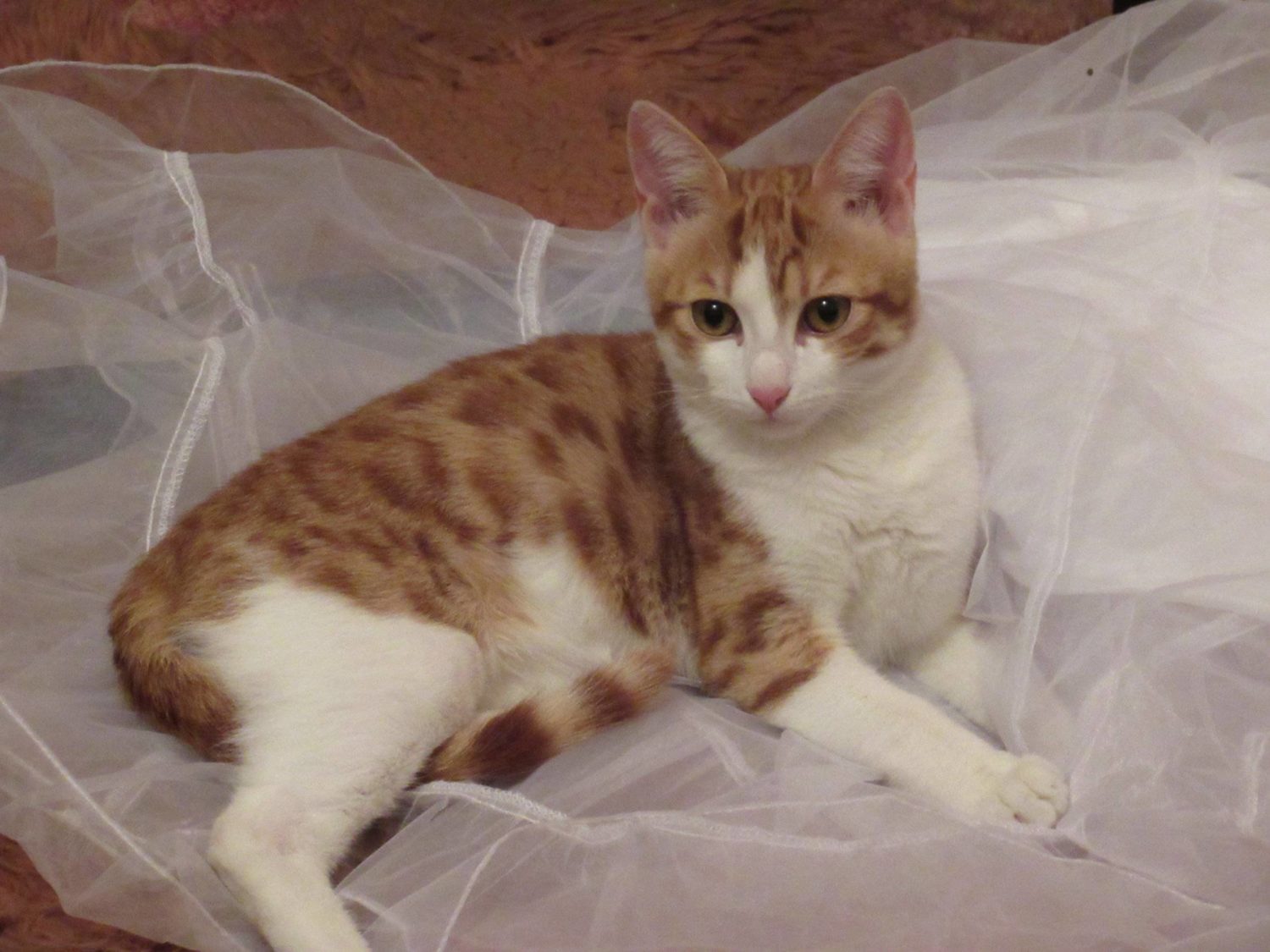 My best friend, having family commitments, made her farewells and I escorted Natalie and Linda downstairs for a much-needed cup of tea, leaving Filipos to make himself at home. First, though, I quickly logged on to Facebook and messaged the people in Greece who were anxiously waiting for news.

Every half hour or so, I went back upstairs to see how Filipos was. He would roll over on his back when he saw me, and meow pitifully when I left.

Unfortunately, I had to go out that evening and the next so was not able to spend as much time as I wished with my new kitten. Each time I entered the room, he would show pleasure at my presence by rolling over and purring and then start jumping around again, even when I sat on the spare bed for a while. I felt somewhat alarmed. Was he some sort of wild cat?

The other three cats ignored the new arrival behind the closed door completely. Meanwhile, Filipos played with his toys, ate, drank, and used his litter tray, but still refused to sit still for 5 minutes. At least not while I was there. I tried sitting on the bed with my laptop, hoping he would settle, but the hope was vain. I opened the door a little and Reuben, the bravest of my cats, walked in. His timid half-brother, Thomas Leo stood hovering in the doorway. 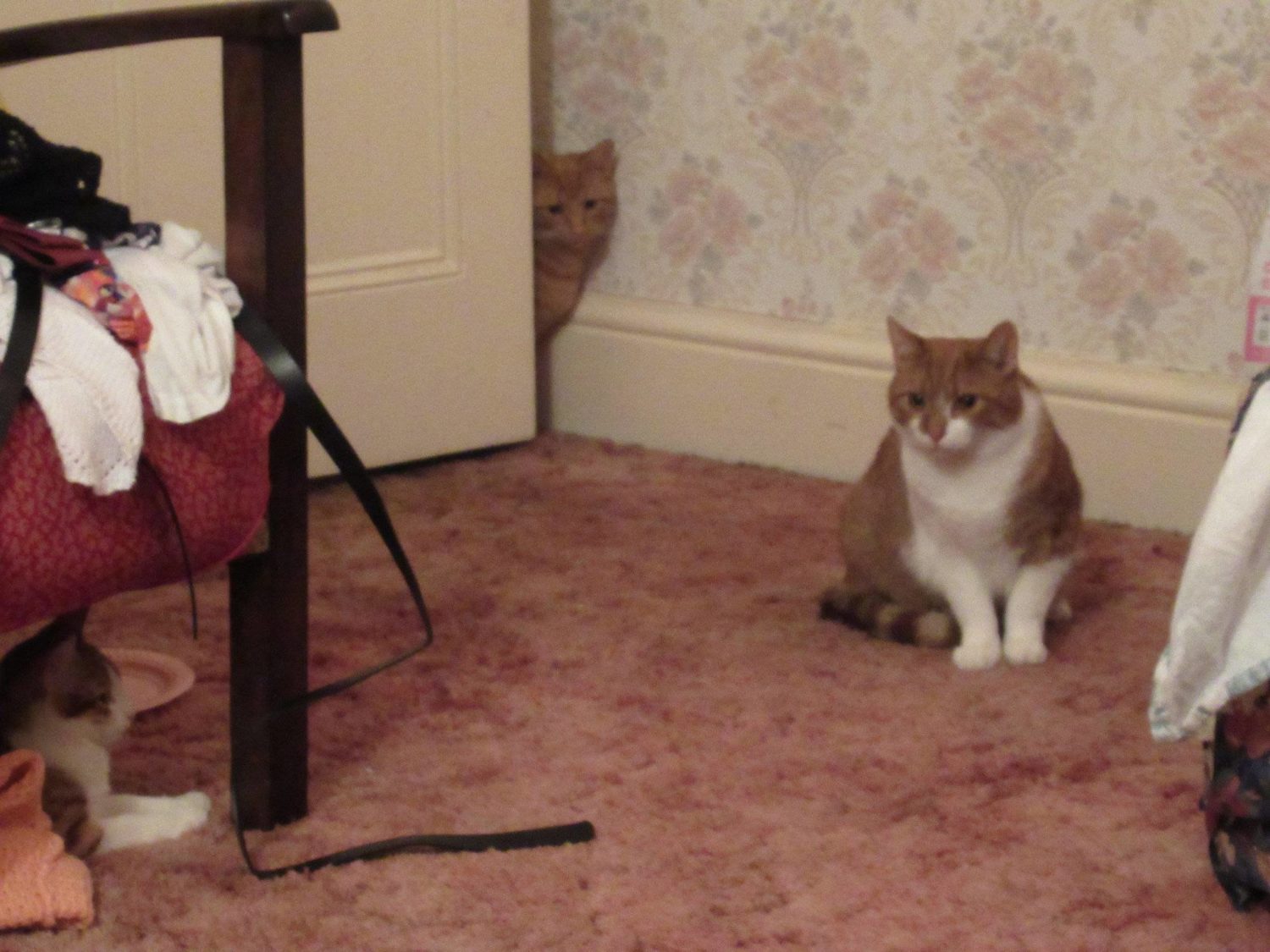 Filipos hissed at the intruder but Reuben did not retaliate. He patiently sat there while Thomas Leo watched. Harry, my oldest cat, kept well out of the way.

The next day, I let Filipos join the other cats and he played non-stop with Reuben. He was a little too prone to wanting all his own way, but the other cats quickly taught him manners. He even rubbed noses with Harry. He was very excited being with the other cats. There was a little growling and hissing but not enough to worry me.

The next day, an amazing transformation occurred. I was sitting on my bed and Filipos sat down and snuggled against me. Thomas Leo snuggled the other side and Reuben went to sleep at the bottom of the bed. It seemed at last Filipos knew he was home.

Almost six months have now passed, and Filipos is very much part of the family. I could not imagine life without him. He has even won several awards in online shows. Although his adoption caused conflict with a few people I know, I have never regretted it for an instant and if circumstances permitted I would do it all over again. All my friends who have met Filipos have been charmed by him and agree he is a special cat.

Filipos is an exceptionally charming and affectionate cat. He loves to snuggle with me or with Thomas Leo who is his best friend. The two are inseparable and groom one another and sleep with their paws entwined. 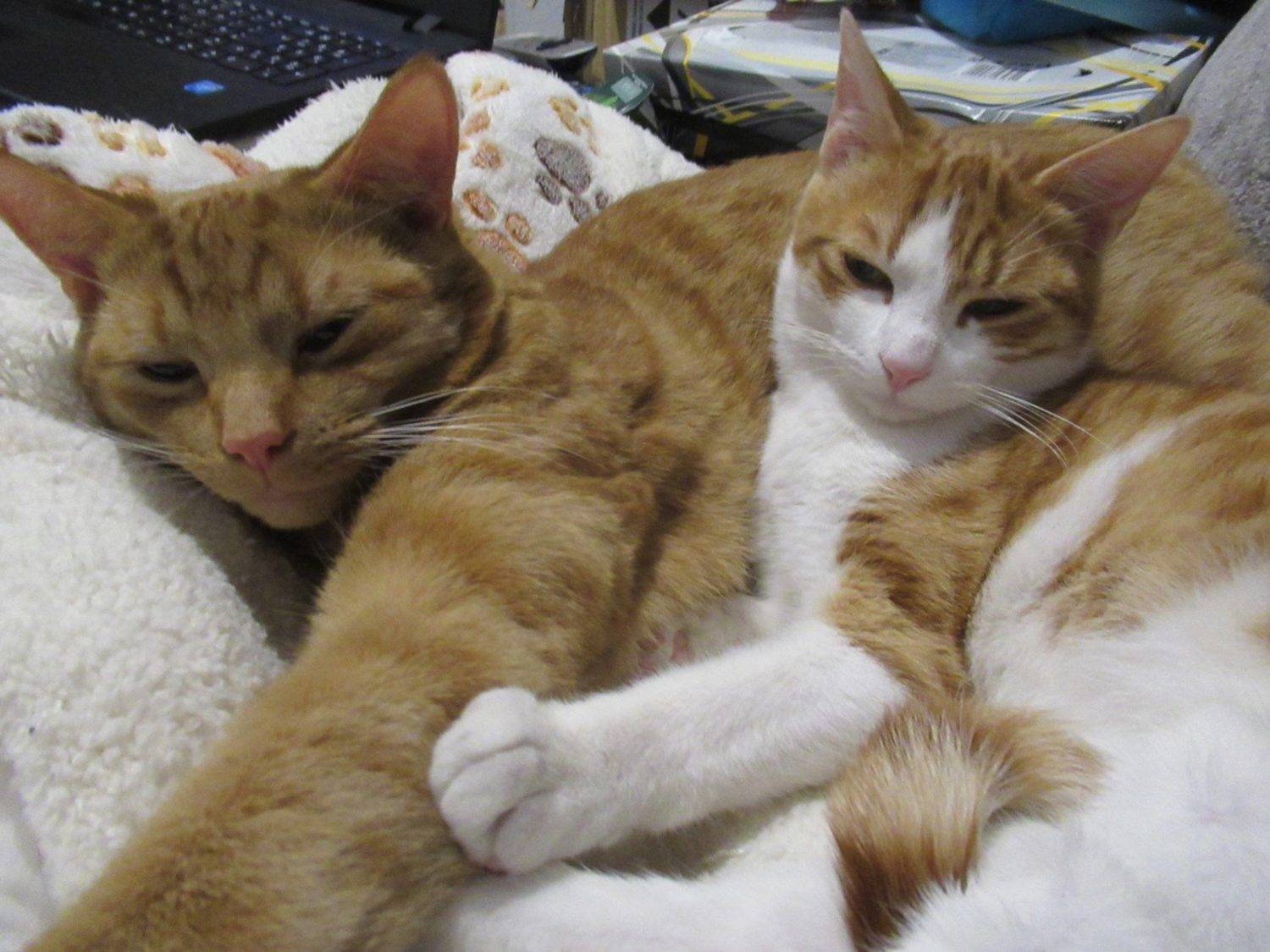 Filipos coped well with the English winter and has felt like a ray of Greek sunshine. Now it is warmer, he loves to play outside in my enclosed yard with the others. 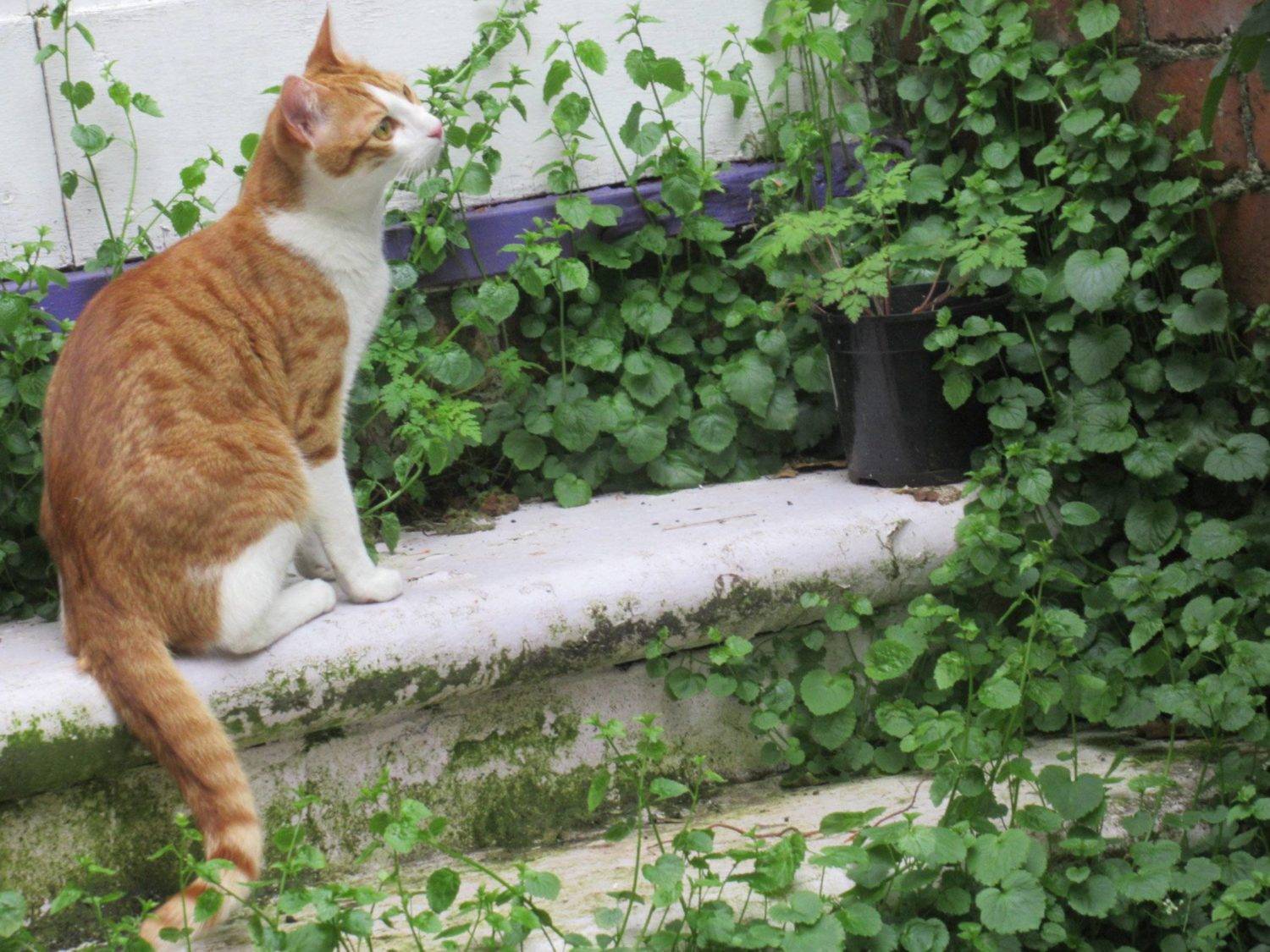 I can never adequately thank his rescuers in Syros for entrusting me with this beautiful cat or Natalie and Linda for making the long journey from Kent. I am still in touch with the Greek rescuers and I hope will long continue to be. There are many more cats and kittens like Filipos still on Syros and God’s Little People have cats like the beautiful grey and white duo Jasper and Jasmine awaiting forever homes.

I never thought I would adopt a Greek cat, but I am so glad I did. 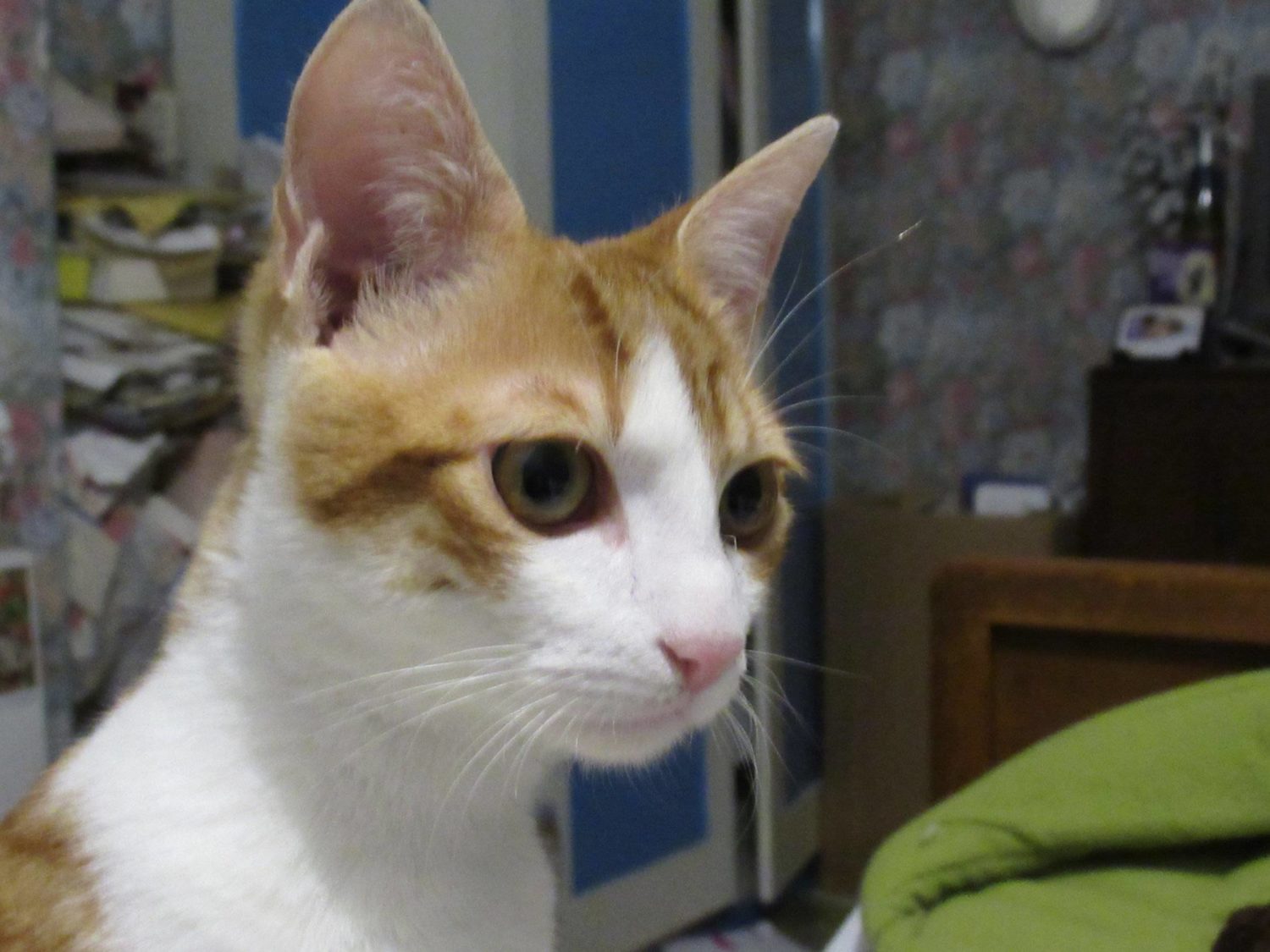 29 thoughts on “The Homecoming of Filipos”