The Ledger of the Logistics of bringing home a Market Kitten

I was rather proud of myself for having brought the tiny charcoal and white kitten home from the market where I had found her sitting proudly against a small mountain of papayas as if she was selling them and would definitely not reduce the price for me or anyone else trying to con her.

I assumed there would only be profits in bringing home such a militant looking market kitten as she would surely show me the profits and losses of fruits and vegetables and herbs and flowers. But profits were the last thing that happened.

First of all the four resident cats were furious to see the tiny smudge of chalk grey and white as basmati rice who had invaded their territory. All except the oldest cat, Pari, also grey and white, who never got furious, never hissed and never gave me any trouble. She was the house angel who loved everybody and everything. Even people passing by on walks, would stop to talk to Pari as she sat on the fern which was always trying to grow on top of the ledge above the water motor without being fur-stuck. All the cats liked to sit there so they could look out at the road safely through the yellow mesh and blink at walkers passing by.

The small midget of chalk grey and milky white fur first of all fell into a deep sleep for almost a week, as she recovered from the dehydration that had overcome her after eating only the milk and rice she had got in the market from a poor vegetable seller. She ate up her cat food and napped, then investigated the garden, and slept. Then she discovered my lap and never left it which was very handy. Though she never taught me the logistics of the market, about fruits or vegetables, she did something better.

She allowed me to try out this remedy I had read for banishing fleas on cats, in a book by a vet who used alternative medicine for cats. She said to put two cut lemons in a one litre pot of boiling water, and let it sit for the whole night. In the morning you remove the lemons and spray the cats with the lemony water. The fleas would just vanish she said.

My other cats had vanished the minute they saw the sponge in my hands and gave me the nastiest glares that cats are capable of giving.

But here was the market kitten, snoozing all day and allowing me to sponge her two three five times a day and in fact all day if I wanted to! It was magical. I also saw fleas zooming out of her fur quickly, and being a stray, that too from the grime of the market, she had a million and more fleas on her tiny body.

Then as she grew older and had to be taken to the very far off vet for spaying, the woman supposed to help me out, nastily did not turn up. But the little kitten sprang so joyously into the snug cage, ready to play, it was a dream taking her and bringing her back. Though the vet had given me a strong dose of antibiotics to give her for a week, I did not. None of the other cats had ever been given antibiotics. I was told she would be better the next day and would eat a little. But this kitten was fine within two hours and was clambering up the kitchen cabinets like a squirrel. It was I who had several heart attacks trying to keep her inside a little room to rest.

The next day she turned into a tornado. She sprang up and down, flew up and down, pounced on Pari, the oldest cat, and taught her to fight like a bouncer and the two of them had so much fun, it was only me shuddering with many surprises! Pari had turned from a staid angel or nun, into a cheeky fighter and she loved it! 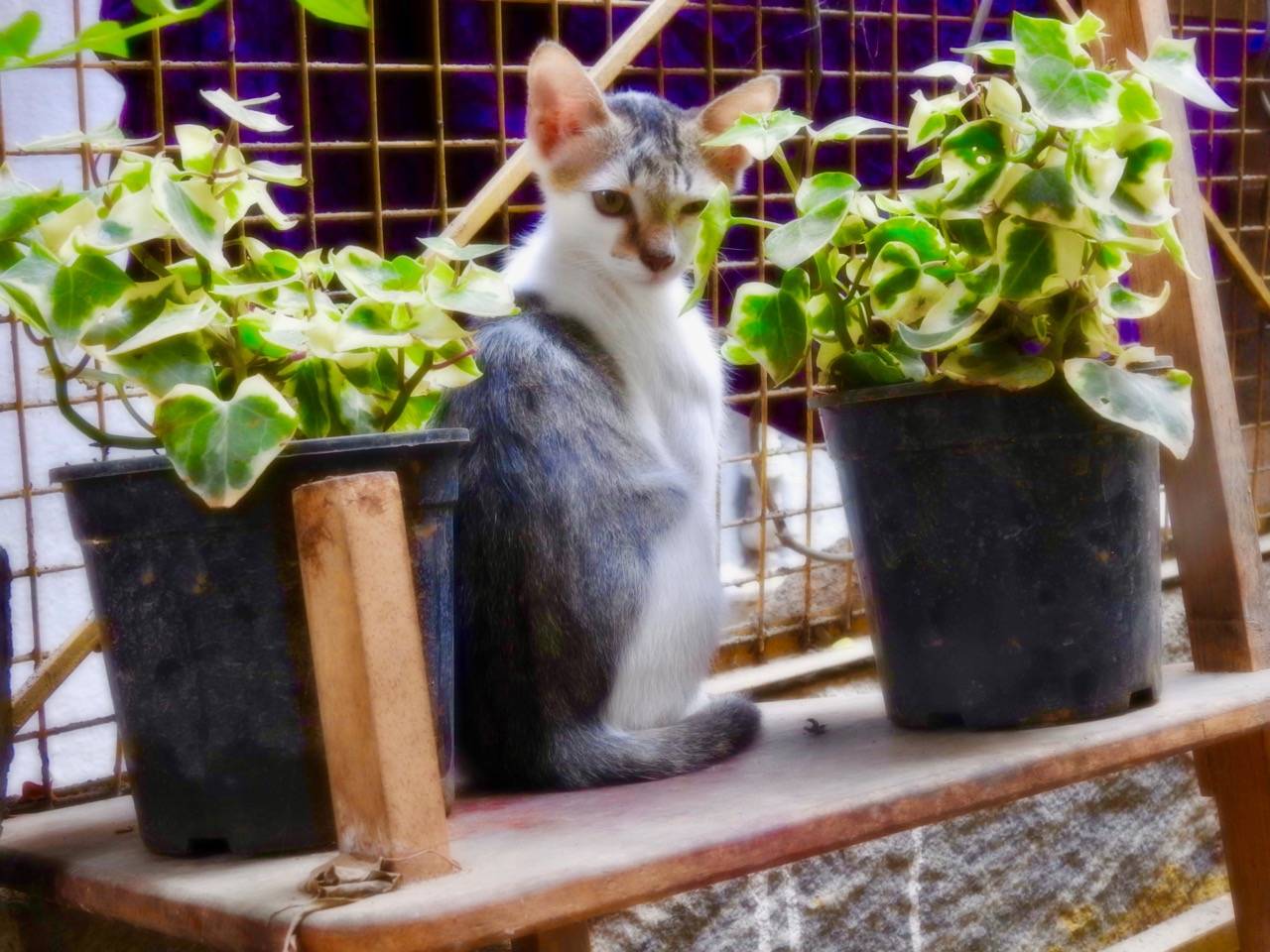 Maska, or Butter, the cat who was attacked by a horrible cloud of jealousy tried hard to kill the kitten as many times as she could, but the market intruder hissed back and became even more militant. Unfortunately for me, as she became strong and almost a warrier after the spaying and the instant recovery, the lime rinse experiment began to somewhat falter! Now she ran away faster than the other cats! But I could use it when she invaded kitchen spaces and plants she should not, so she scuttled off but got enough lime rinse inside her. The final result of this ledger on the logistics of carting home a market kitten was that I finally discovered that the lime rinse does work. 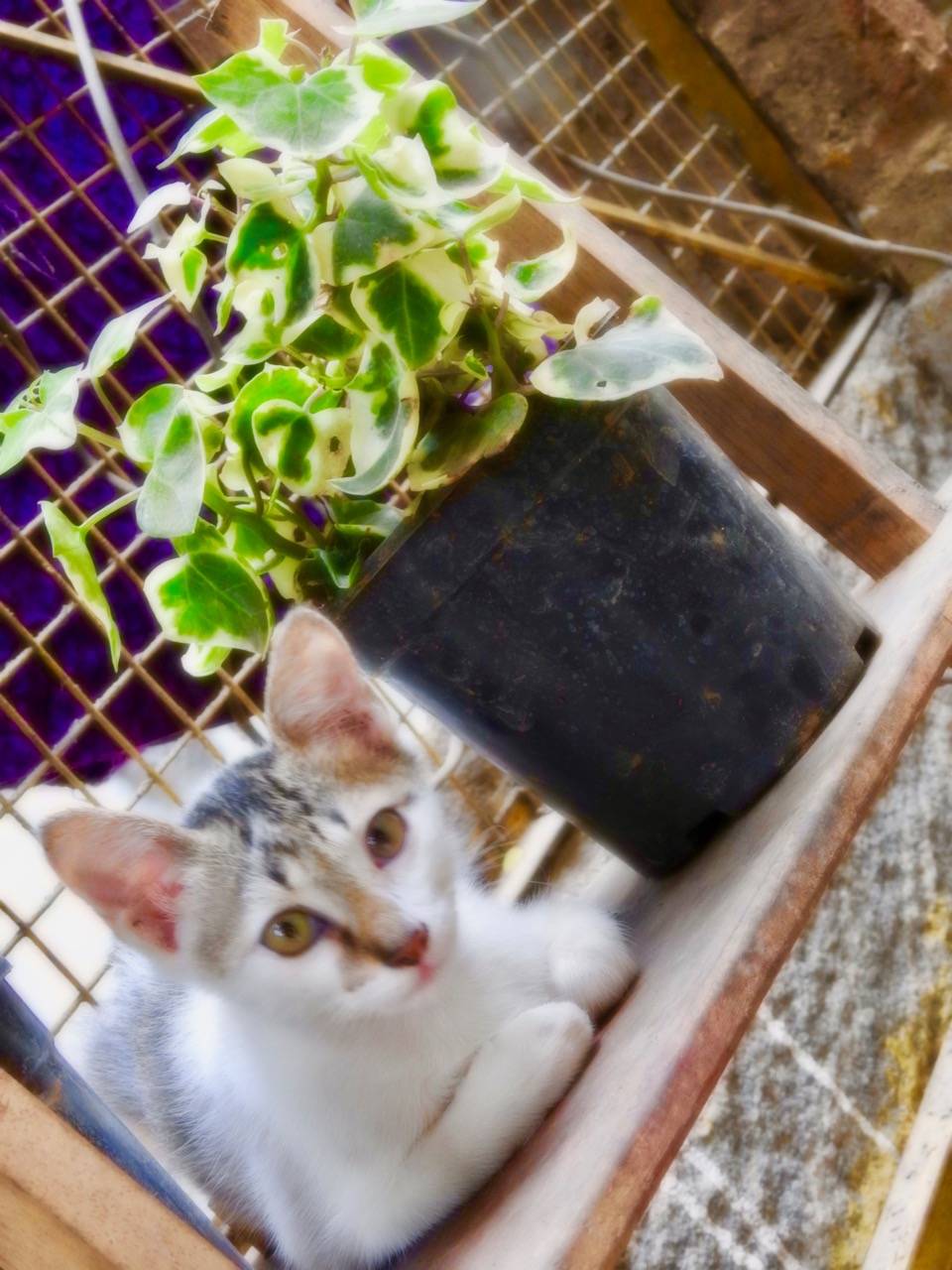 Now she has just five or six meek fleas which are easy to catch and sink in cold water. But the maddening patient tries to drink up that water from the bowl! She is a fighter and a nosy parker and she tries to murder every pen, every hair band, every coin, every spoon she can get her paws on. She is never going to teach me the pros and cons of the potatoes and tomatoes related market choices, but she has taken away my heart and my soul and I wonder how much she will charge for them, when she begins to sell them to someone stupid enough to want to buy them!