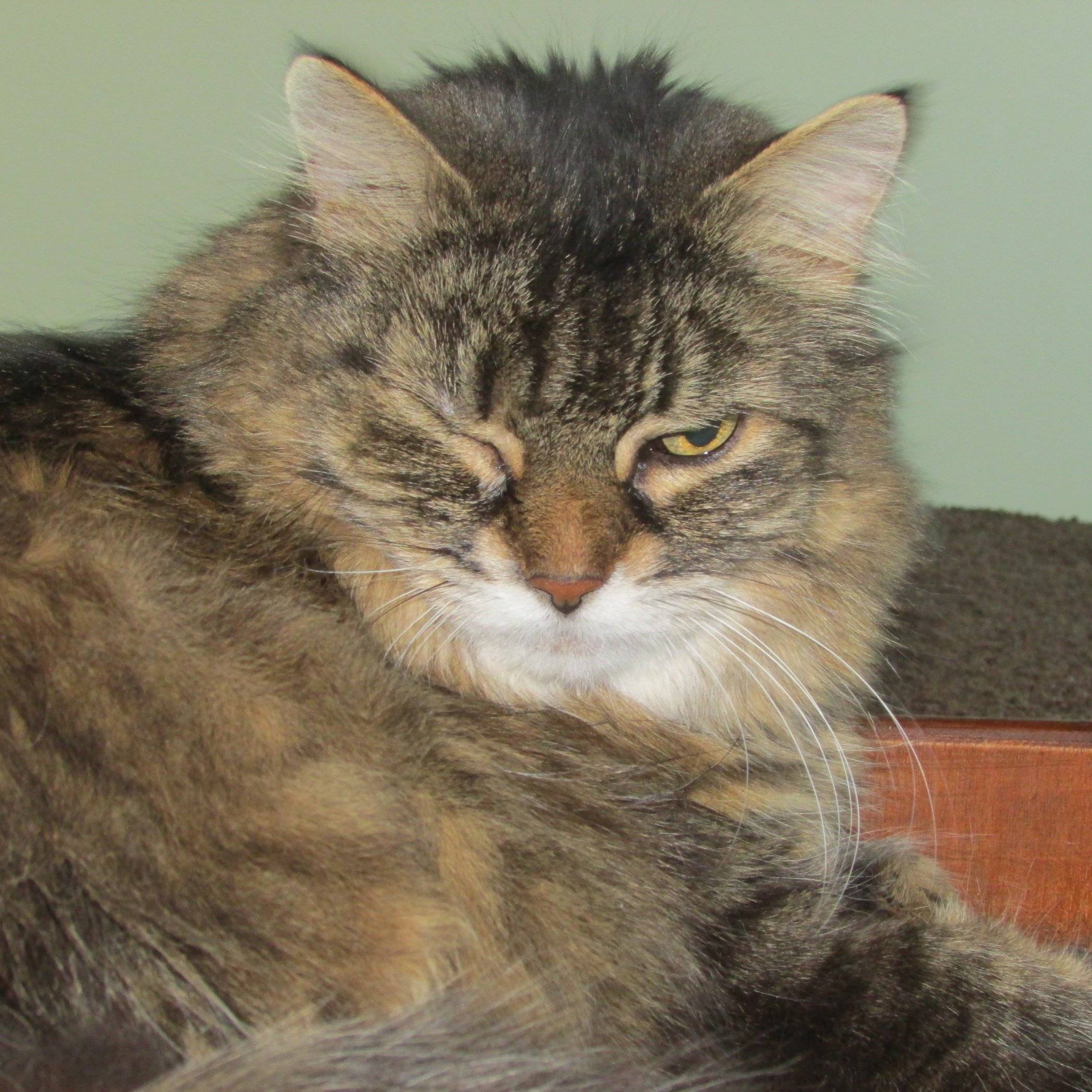 The time is just past their first birthday. They have grown in size and their personalities are quite different from when they first arrived. Every time I leave the apartment I have an escort. Quinn insists on leaving with me to check out the corridor. I open the door and he runs to the elevator. Ally is waiting on the other side of the door. After a few minutes he returns to the apartment pops inside and I continue on my way. If there are any people in the corridor, Quinn waits for me to come up behind him. He may want to check out the corridor but only if it is empty!

Quinn has become a very big cat. He is gentle when he uses me for a launching post or a place to rest his very formidable self. If I am leaning over, I am fair game. Ally on the other hand has retained her timidity but only with other people. If anyone comes to the apartment she may take a look at them but she often just disappears. Quinn wades right in and makes himself familiar.

These two also know in advance if someone is coming. When someone is coming to my apartment, they ring the buzzer from the lobby. Quinn and Ally know the sound and what happens a few minutes later. They both sit in front of the door and wait for the guest. Quinn approaches the stranger and Ally looks and runs.

I look at these two and I wonder what is going through their minds. They are both asleep: Ally on the chair I put in the bedroom for me!!! And Quinn is on the end of the bed, head on an extra pillow. They sleep so soundly, their small bellies the only movement. They trust so sincerely. When I move to touch them they will only stretch to allow for more contact, they don’t even open their eyes. Trust. We humans equate that trust with love. An ear twitches. I reach out my hand and gently stroke a black and tan head. A tiny little motor revs and two front paws stretch and turn. A little belly is at hand. An invitation.

Quinn has begun to sleep beside me at night. He sleeps on the side of the bed I must get out of. As a result he is often rudely disturbed when I wish to rise. I must also point out that he is almost three feet long when he stretches and he does prefer to sleep full length! Ally’s place of preference seems to be the bedroom television. My friends try to explain this by saying she likes the heat from the TV, except she prefers to sleep there when it is off, not when it is on.

There are people who do not believe that I have two cats. It is rare to actually see two together. I do talk about them but then there are those people who think I am a little . . . . . . well. . ..whimsical? If I were wealthy it would be eccentric.   If they are lucky enough to see the pair when they come into the apartment that is often the only time Ally is present, for a fraction of a second. I know where she hides but I respect her wish for privacy. She is trying to get to know people. There have been occasions when she wanders nearby when certain people visit. Of course I should probably mention that the only times she has actually attempted to approach people they have always been men. Ah yes, the woman’s way.

Ally is a cuddler. She like to cuddle when I go to bed, she curls up in my arms puts her head in my chest and purrs like a runaway motorboat. She also likes to cuddle in the bathroom. Now I cannot figure this one out. Ally will curl up in my lap; place her head in my chest and go to sleep when I am on the toilet! If I don’t force the issue she is quite happy to stay put. I may feel like a heel but I really don’t wish to spend my evening in a seated position with my pants around my ankles. Call me selfish.

I recently did my laundry and when I returned to my apartment Ally jumped onto the top of the laundry. The plan was to dump the laundry basket and put everything away. Tough to do when a kitten has placed her little body on top of everything. I pleaded, I cajoled (like she really understands the arguments) to no avail. Finally I had to push Ally to make a decision. She wasn’t happy but she did give in. With a somewhat annoyed twitch of her tail she jumped off the laundry and stalked away. Why should I feel guilty? It’s my laundry! 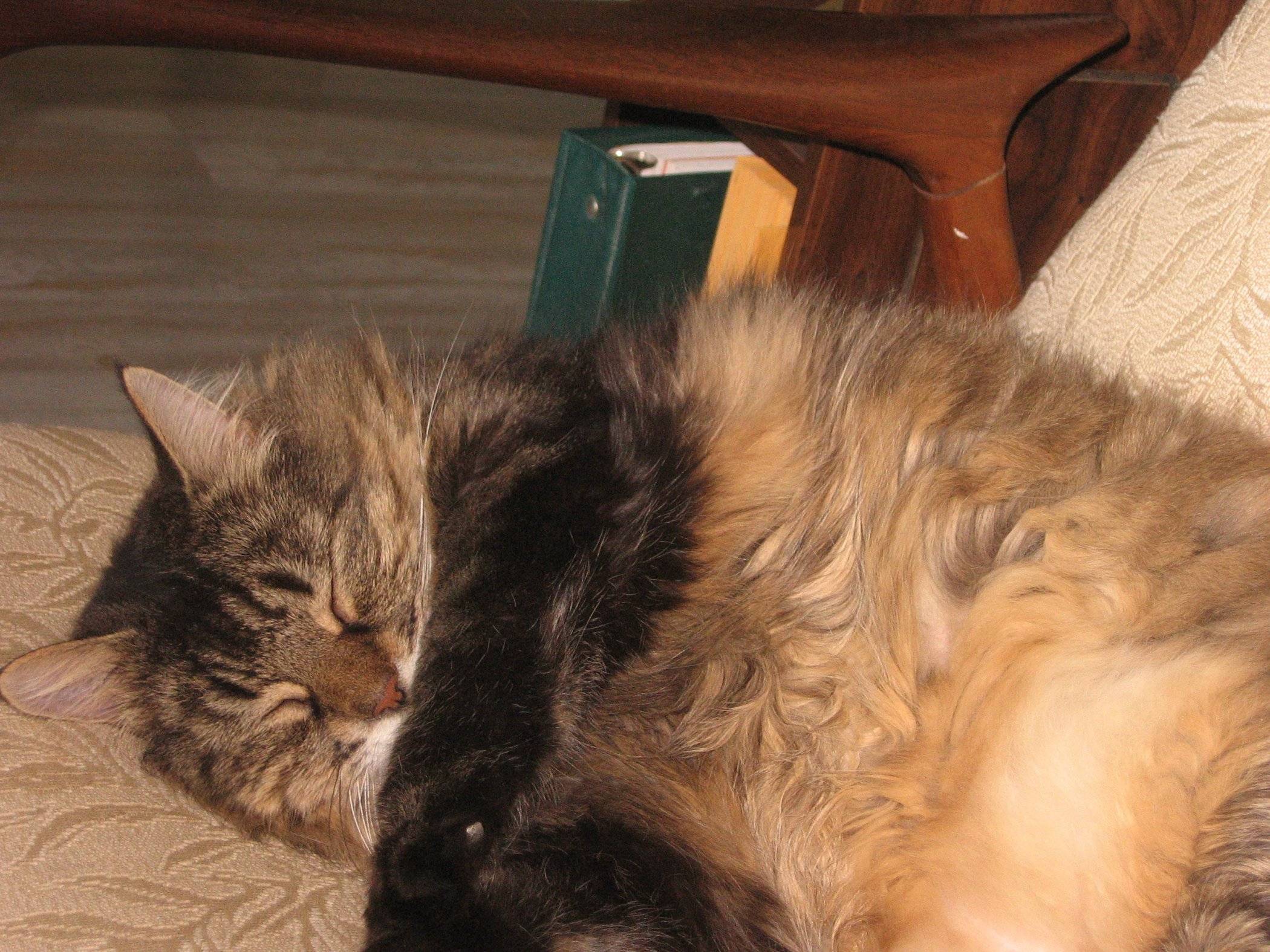