Please find below a guest post by Linda Smith:

There’s a poster with a picture of a gray tabby cat on it. The cat has its eyes closed & seems to be smiling. The message on the poster is this:

Earlier this year we lost our 19-year-old cat, Max. The love we had for him is indescribable & the grief at his passing can only equal that. Neither my husband nor I could imagine getting another cat. We were both very much against that “replacement cat” thing because we knew how impossible it would ever be to attempt to replace our Max.

From the beginning, people started calling, writing & texting us with offers of cats … “My sister would like to rehome her cat. Please consider taking her.” “We just got 2 kittens & their litter mates are still available …” “I have the PERFECT cat for you …” We just weren’t ready & couldn’t imagine having another cat after Max. So we went with our gut instinct & didn’t even think about getting a cat. Although the house seemed increasingly quiet … empty … without our Max, we didn’t think getting another cat was the answer.

I kept remembering, though, what I’d read in Cat Fancy Magazine a long time ago. It said that the perfect memorial to a lost, beloved cat was to give another in need a loving home. Our Max had been a shelter cat.

Grief is an unusual emotion. It hangs on & can be limiting if you let it. It can hang heavily around our hearts & change us. It can close doors that would be best left open. Dealing with grief is the most difficult thing.

After 2 months without our Max we began opening our hearts … understanding that we could never replace him … that he lived an incredibly long life full of love & NOTHING could change that. We began to understand that the love we had for Max would keep him forever alive in our hearts but that our hearts were big enough to share our home & our love with another cat in need. We believed that Max would have agreed with that.

So we began to talk about the possibility of adopting an older cat. Seniors mostly are unadoptable due to the abundance of available kittens & they truly become lost in the shuffle in shelters. Hopefully they end up in “no kill” shelters so at least they have some hope of a long, if not ideal life.

I began “window shopping” on our local shelter web sites.

I bought a litter box … just in case.

One of our local shelters collects used ink jet cartridges & recycles them for $2 each. The money from that fundraiser goes directly into the care of the animals at the shelter. For years our science

fiction club has been saving & donating our empty ink jet cartridges to the shelter. The collection always ends up at our house, so Willy & I took them to the shelter & while we were there we stopped in to look at the senior cats I had seen on the web site. I was especially interested in a 9-year- old female tabby I’d seen whose name was Phoenix.

Phoenix was living in a cat room with 6 other cats. One of the more progressive shelters, most of the cats are not in cages but roam freely in several rooms that have condos, climbing structures & elevated & lower shelving for stretching out & napping. There was a large window that looked out onto a hallway.

I saw her right away.

Sometimes you just KNOW. It can be a sweet face, a look of anticipation or the total lack of it … or the twitch of a whisker. You just know & I think we KNEW immediately when we met Phoenix that she would be our cat.

Because we had a trip planned the coming week we asked the shelter if they could keep Phoenix an additional week until we got home from the trip. They agreed. Because she was a “senior” cat her adoption fee was less & because of a 2 week special, all cats were available at a reduced fee.

For a week we had our “discount” cat on “layaway” & I couldn’t wait to bring her home. I went to Pet Smart & bought a Kitty Condo for our sun room so she could sit & watch birds. I bought her a mouse that squeaked. I visited her in the shelter before we left for our trip. 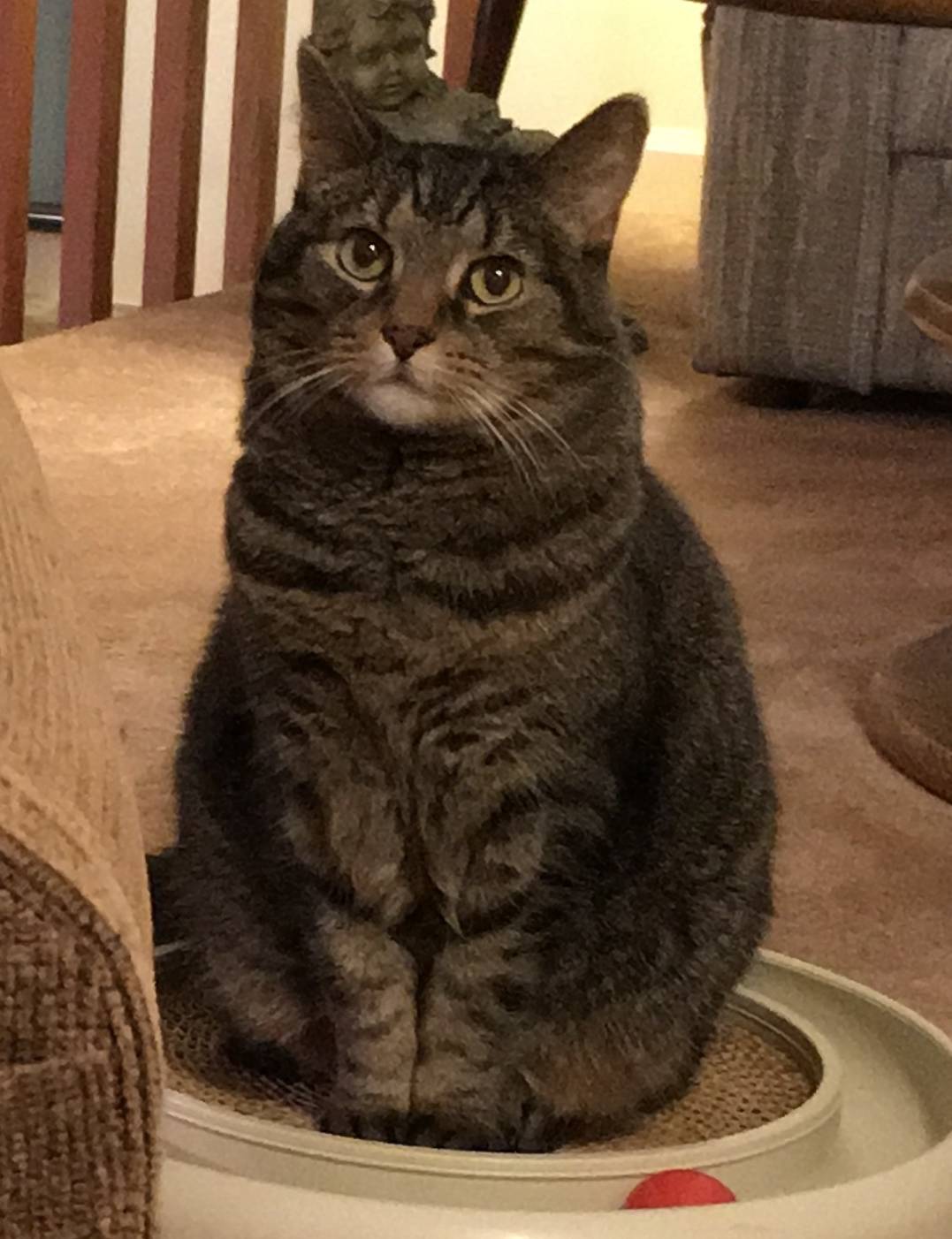 While we were at the beach we talked about names. It turned out that Phoenix was actually 10 years old & Phoenix was the only name she had ever had through 2 owners. We wanted to give her a more feminine name that matched her petite appearance but didn’t want to change it so drastically that she wouldn’t realize we were talking to her. We tried to find a name with 2 syllables … the first sounding like the first syllable of Phoenix. After much searching & considering, a friend suggested Phoebe & that seemed to check all the boxes, so Phoenix became our Phoebe.

On Monday after returning from our trip I picked Phoebe up at the shelter.

Bringing Phoebe home was filled with anticipation. Would she be frightened? How long would it take for her to adapt to her new surroundings? Would she use the litter box?

She immediately responded to us with head bumping, wanting to be petted & sitting beside us on the sofa. She seemed perfectly at ease with us but frightened of the house, especially our sun room.

I think we don’t realize how traumatic shelter life can be for cats that have known loving homes & have ended up in shelters for whatever reason. There must be so much confusion at the beginning; waiting for the owner to come back – living with strange cats, smells & noises.

Phoebe had lived for months in a 10 X 7 room with 6 other cats. That was her world. To her, our home must have seemed like a small city, which she slowly & methodically explored. By the third day she had ventured into the sun room far enough to nap on the ottoman. By the fourth day, she went all the way in & climbed to the top of her condo & watched birds, squirrels & leaves falling past the windows. She slept with us the first night.

Phoebe is going to be alright …

I wish we could save them all but, like the poster, we have changed the world for one cat & that just feels good. We have given little Phoebe a second chance at a better life; a chance to spend her senior years being cared for & most of all, being loved.

What has Phoebe done for us? Because we love & appreciate cats, she has already brought us joy & laughter. Her personality is unique … from the way she seems to show us affection to the cat footprints I’ve found in the morning on the glass top of my kitchen stove. Our house isn’t quiet anymore … nor does it seem empty.

Only time will tell whose world has really changed by saving Phoebe ….

About the author: I’m married to Willy & have a stepson who owns / runs a local restaurant with his wife. I’m a retired Operating Room Registered Nurse & president of a local non-profit that sponsors 10 charities at Christmas & sends a local middle school student to NASA’s Space Camp in Huntsville, AL annually. I’m a 9 year breast cancer survivor & speak to seminars & groups about breast cancer. Also speak about fundraising, being a professional woman & to nurses seminars on a number of topics. I’m a freelance writer with articles published in Central Virginia HOME Magazine, the Communique (magazine), our local newspaper & a story published in Chicken Soup for the Soul: Inspiration for Nurses. I’ve written & published one book of poetry / prose called Reflections of My Life of  Rhyme. I totally enjoy writing the blog, probably more than anything I write, even though I don’t get paid for that. My thoughts on writing the blog are that if something I write makes just one person smile or feel some sort of connection, than I am successful. I have been surprised at the number of followers I have. From 2009 – 2015 I hosted a local television talk show, Lynchburg Live. Doing the show was one of the joys of my life.