The Tail Tikkler is one of those toys that’s great for an interactive game with your cat. I make Dirk chase it around the house or up and down the stairs. We also play with it around his scratching barrel – at the moment it’s ‘hidden’ inside the scratching barrel! I love this toy as it gets Dirk running, jumping and climbing.

What’s that up there on my scratching post?? It looks interesting, let’s have a closer look.

Dirk mainly seems to love it because it’s fluffy and has feathers. He loves catching it and the dragging it with him to his ‘lair’ – in other words a cardboard box 🙂 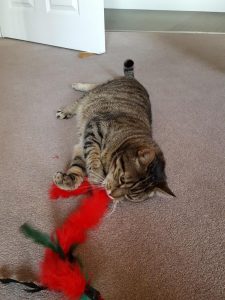 No way I’m ever giving this back

He’ll lick the feathers and sleep on top of it so no-one else can get the Tail Tikkler. Obviously adding catnip to the mix makes this toy even more interesting. He’ll roll all around the living room with it. Keeps him entertained for quite a while and us as well just watching him 🙂

Yummy feathers!! I love it 🙂

5 thoughts on “Dirk and the Pet Love Tail Tikkler”